The latest update to Third Way’s Advanced Nuclear Map reveals unprecedented growth and progress in a clean energy technology with tremendous potential. Thanks to consistent bipartisan support across multiple administrations—including clear endorsement by the Biden administration as a pillar of its clean energy strategy—the industry has not only expanded, but projects are closer to deployment and commercialization than ever before. Continued support for advanced nuclear will be critical to our economic, jobs, climate, geopolitical, and national security interests.

Since 2015, Third Way has been tracking the evolution and growth of advanced nuclear innovation projects, initially just in the United States and Canada, but eventually around the world. The reasons for keeping track of the advanced nuclear sector are simple: to achieve net-zero carbon emissions as fast and fairly as possible to mitigate the most serious threats posed by climate change, and to ensure the United States develops a globally competitive industry and workforce for next-generation nuclear, enabling not only durable climate policy, but also domestic jobs and economic growth.

We have long recognized and detailed advanced nuclear’s promise as a key tool for decarbonization, whether pairing with renewables to generate electricity, providing heat and power for industry, or producing carbon-free hydrogen to displace fossil fuels. Thanks to the tireless work of innovators, entrepreneurs, and policymakers, this potential is growing ever closer to realization, especially as the advanced nuclear industry identifies physical sites and submits construction and operating licenses for their groundbreaking concepts and technologies. (Data Collected by Third Way and Energy for Growth Hub) 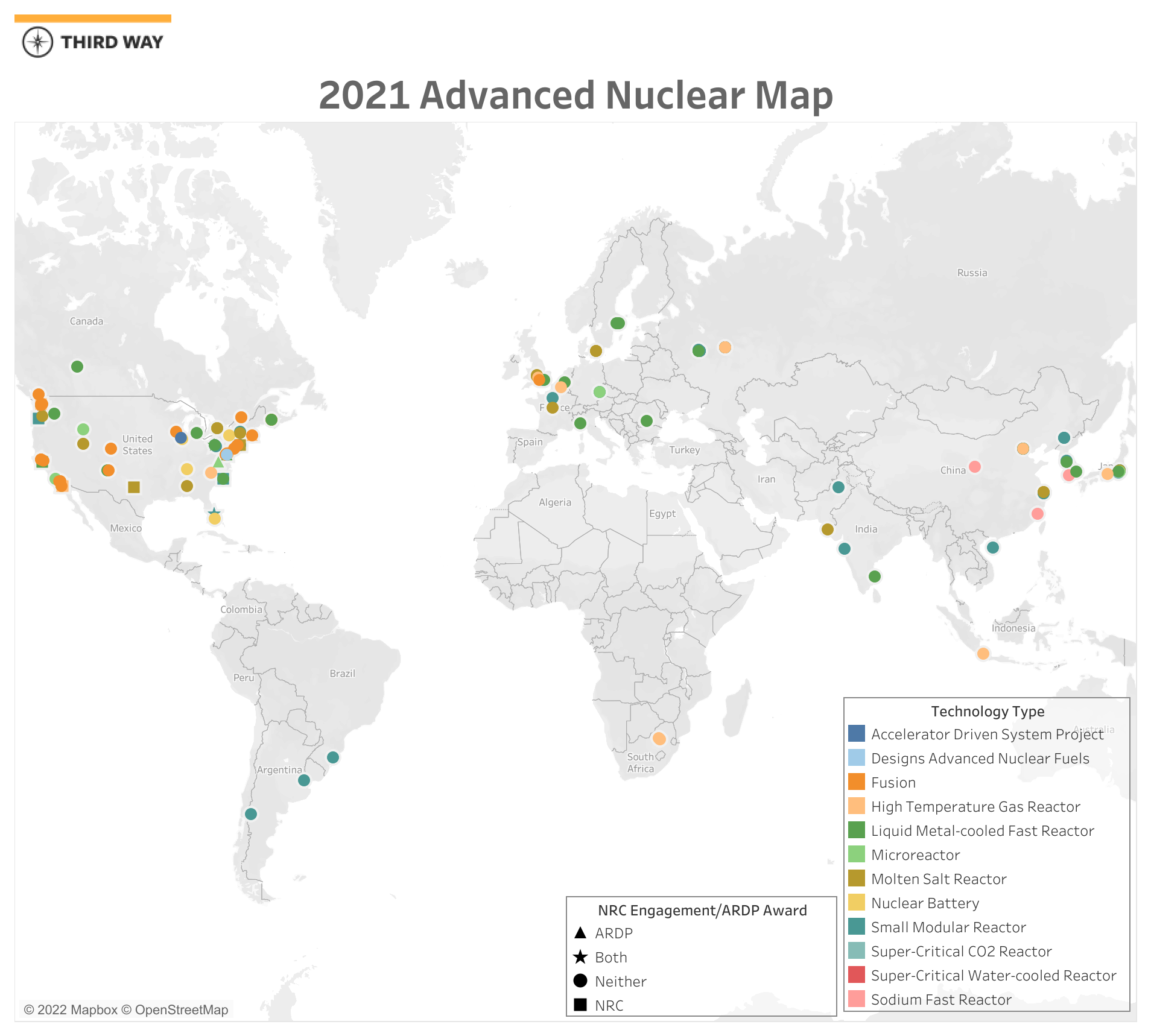 When Third Way first began tracking the emerging advanced nuclear sector seven years ago, the progress of the industry was perhaps most visibly demonstrated by growth in numbers. Third Way’s first advanced nuclear map in 2015 featured a list of 48 projects and companies, and this number grew to 75 just a few years later in 2018. Third Way started mapping international advanced reactor projects in 2020, finding a total of 130 projects worldwide.

Maturation of the Advanced Nuclear Industry

The emergence of newcomers in the advanced nuclear space is a clear sign of continuing interest in these technologies and expectations of the crucial roles they will play in decarbonization and reducing climate pollution. The maturation of the advanced nuclear industry—that is, the process of actually deploying and commercializing once conceptual designs—is arguably becoming the more relevant measure of its progress, rather than mere expansion. At the end of the day, these technologies must be demonstrated, built, and operated to make a contribution to mitigating emissions and fighting climate change.

On this front, this past year was a watershed for the advanced nuclear sector, with a number of companies announcing sites for their first units and demonstrations:

The siting announcements for these demonstrations are collectively a major milestone for the advanced nuclear industry. A common theme for all of these demonstration projects: they are all cost shares with the federal government under the U.S. Department of Energy (DOE) Advanced Reactor Demonstration Program (ARDP). This past November, the passage of the Bipartisan Infrastructure Bill resulted in major increases in authorizations and funding for the ARDP, and as Third Way noted, robust federal support for this program will be critical for American leadership in nuclear energy and unleashing a critical solution for global decarbonization. ARDP awardees, from the Pathway 1 demonstrations to the ARC 20 recipients, are marked as a triangle symbol on the updated map.

In addition to major siting decisions, developers are also initiating engagements with the U.S. Nuclear Regulatory Commission (NRC), with an eye towards licensing their respective designs. As anticipated, more and more advanced reactor developers have started formal communications with the NRC, at the very least, to notify the agency of their intent to start regulatory interactions. For example, the NRC is now reviewing Kairos Power’s construction permit application for its Hermes low-power demonstration reactor. Many more advanced reactor and light-water SMR companies have started pre-application activities with the NRC, at the minimum.

With increasing developer interest in starting licensing conversations with the NRC on their respective advanced reactor and SMR technologies, it is critical that the NRC has sufficient resources and capacity to manage a growing volume of pre-licensing activities and licensing reviews. In the end, the efficiency of these processes will be a major factor in the timeliness of advanced nuclear demonstration, deployment, and commercialization. The map highlights entities that have at least begun pre-licensing activities with the NRC via the square symbol.

For companies and projects that have both received ARDP awards and started formal discussions with the NRC, a star symbol is used in this map update.

Although North American developers have made rapid advancements towards first deployments and demonstrations, comparable developments are occurring overseas—in some cases, other countries have already begun operating advanced nuclear designs. Indeed, this map update shows the multitude of advanced reactor development projects taking place around the world.

That other countries are moving full speed ahead on advanced reactors is immensely consequential, as the global market is projected to grow significantly in the upcoming decades driven by fuel supply disruptions, energy poverty, and climate concerns. Competition for these markets is intensifying and the stakes are not merely commercial. Considering that Russia and China are the primary competitors for these international markets and new nuclear build projects establish diplomatic relationships that extend for decades, winning these markets has enormous relevance for our geopolitical, foreign policy, and national security interests.

Given the urgency of climate change and tightening competition over international markets of high relevance both commercially and geopolitically, it is vital that we maintain support for progress in the development, demonstration, deployment, and commercialization of innovative nuclear energy technologies and reactor designs.

To accomplish this, we must address a number of near-term challenges: maintaining robust funding and support for ARDP and ensuring that these projects meet financial, technical, regulatory, and social milestones; ensuring that the NRC has sufficient resources and capacity to review advanced nuclear technologies and the development of generic rules to help streamline the overall process; and facilitating the development of a domestic market supply of high-assay, low-enriched uranium (HALEU) to support both near-term needs and reactor exports down the road.

Fortunately, the Biden administration has clearly identified advanced nuclear as a major priority for its clean energy agenda, and thus, we are poised to rise to these challenges. There has been consistent political will to enable advanced nuclear’s growth and development: it has been one of the few clean energy technologies that the Obama, Trump and Biden Administrations have all supported, and by members on both sides of the aisle in Congress.

Current progress in siting, demonstrations, and licensing is creating excitement both domestically—down to the state and local levels—and internationally. With 2022 now here, we must keep this momentum going and make sure that the advanced nuclear industry can take the next step forward.