2021 Update: Map of the Global Market for Advanced Nuclear

Last year, Third Way, in partnership with the Energy for Growth Hub, launched its map of the global market for advanced nuclear: an assessment of nuclear readiness—using 10 metrics to gauge a country’s relative preparedness and motivation for civilian nuclear development—and projected electricity demand growth by 2050 for 148 countries. The findings of these assessments were clear: there are extensive market opportunities for advanced nuclear globally, and it is therefore essential that we continue to invest in and pursue innovative nuclear technologies to ensure that we maintain our leadership in a sector that has such immense consequences for our climate, national security, and geopolitical interests.

The conclusions from the mapping exercise complement and are consistent with research that Third Way and its partners published earlier this year, which highlighted international programs to develop, demonstrate, deploy, and commercialize advanced reactors, indicating that other countries also recognize the potential for advanced nuclear to meet both climate and development objectives. Moreover, this research also details the rapid progress that has been achieved in the development of advanced nuclear throughout the world, reinforcing that advanced reactors will soon be available as a viable tool to reduce emissions and fight climate change.

For 2021, Third Way and Energy for Growth Hub are pleased to include updates to the demand growth projections and readiness data behind the map, as well as provide more in-depth analyses of regional trends and selected focus countries. As in the 2020 map, the data points to the potential for an expanding international market for advanced nuclear in the upcoming decades, suggesting that advanced reactors may assume an increasingly significant role in global decarbonization efforts—especially relevant in light of this year’s COP26 summit in Glasgow. 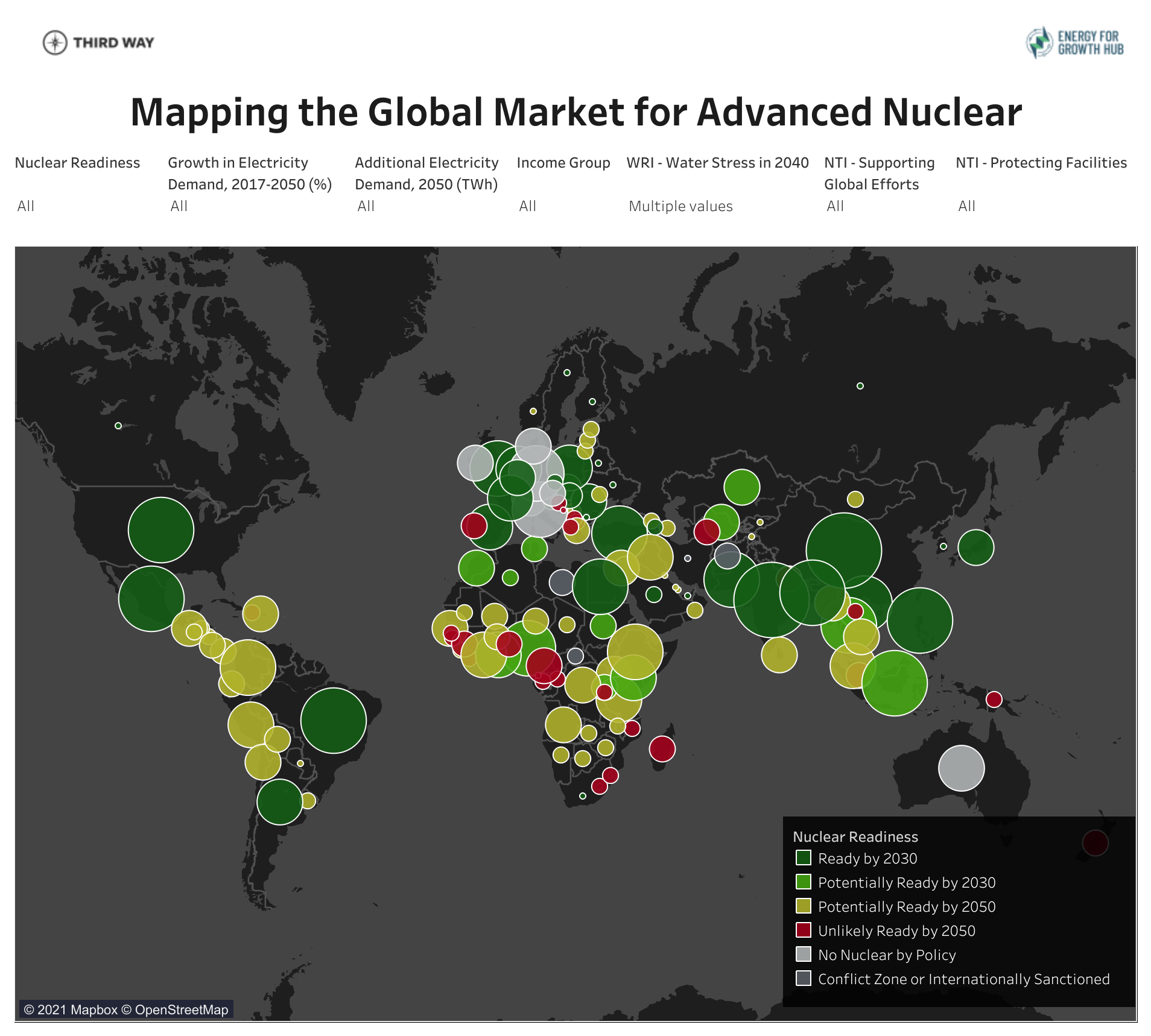 The 2021 global advanced nuclear markets map includes updates on electricity demand projections and readiness indicators for all countries. In addition, there are also focused analyses on regional trends and developments, as well as a deeper dive into 12 focus countries of particular interest—chosen based on internal assessments, external feedback, and other criteria. The more detailed examinations of the 12 focus countries include information on projected demand for coal replacement, electric vehicles, desalination, and industrial energy applications.

The topline conclusions of the 2021 update are consistent with the findings of last year’s map:

1. Electricity demand is growing rapidly and will continue through the foreseeable future

2. Advanced nuclear is well positioned to meet this new demand

3. The global market for nuclear power could triple by 2050

Additionally, in the process of updating the map, a number of regionally-focused observations were made:

East Asia and the Pacific

Latin America and the Caribbean

As mentioned, 12 focus countries were selected for more detailed analysis—looking at measures beyond readiness and projected power demand growth, including factors that could significantly affect demand for advanced nuclear, such as coal replacement, electric vehicle demand, desalination, and industrial applications. Data for these focus country metrics can be found in either the updated dataset or through tooltips on the map. 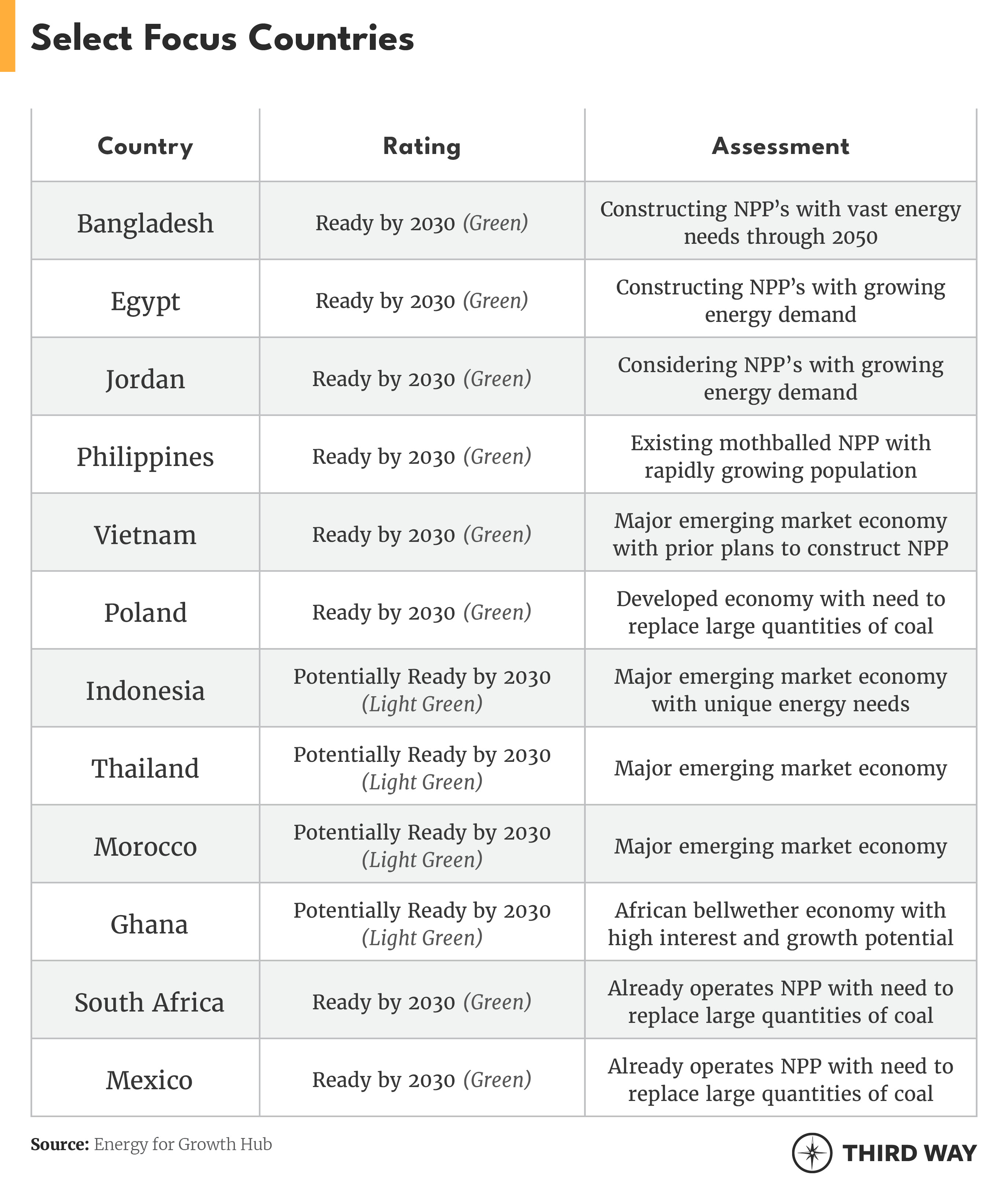 Glasgow is an appropriate setting for the 2021 United Nations Climate Change Conference, or COP26, especially given that Europe is in the midst of a debilitating energy crisis, the effects of which have been exacerbated by the combination of colder weather, sagging wind generation, coal retirements, and decreased regional natural gas production—all highlighting an excessive dependence on Russian gas supplies.

Although some view the energy crisis as a justification for putting the brakes on climate action, Europe’s current energy challenges arguably underscore nuclear’s potential to simultaneously stabilize prices, provide energy security and reliability, and reduce emissions. In fact, a number of European capitals have announced their intent to double down on nuclear deployment in response to the crisis, revealing growing recognition of nuclear’s value in fortifying energy security and price stability, to say nothing of climate mitigation.

On the surface, energy security and reliability certainly appear to be the primary drivers for this renewed push for nuclear in Europe. However, pro-nuclear European states have become collectively more vocal in emphasizing the environmental and climate benefits of nuclear energy, particularly in the context of the European Union’s sustainable finance rules and the debate over nuclear’s standing as a green technology. Mounting acceptance of nuclear’s climate utility among the international community—both within Europe and outside of it—has resulted in a more prominent platform for nuclear energy in forums like COP26 compared to the past.

And while there remains measurable interest in large conventional nuclear plants in Europe, greater attention is now being directed towards more innovative and advanced designs. For example, there is budding momentum in the UK on the development of advanced modular reactors, specifically examining potential demonstrations of high-temperature gas-cooled reactor concepts. In France, a part of President Macron’s 30 billion euro industrial and decarbonization investment package will be directed towards the development of smaller reactors and advanced waste management technologies. And Romania announced on November 2nd that they will be partnering with U.S. company NuScale to construct small modular reactors.

In light of this increasing alignment on advanced nuclear between the United States and its traditional allies and partners, it may be both timely and prudent to more intently explore opportunities for international cooperation, including regulatory harmonization, co-financing and investment, supply chain integration, and joint R&D of new fuels, materials, and applications. Ultimately, these partnerships may be necessary to meet the immense global demand as projected in this study, allowing advanced nuclear to maximize its contribution to global climate and development goals.

Enhanced international collaboration should comport with a more cohesive strategy on advanced nuclear at home—proposed as part of the 2020 map release—involving streamlined export controls, continued support for advanced reactor developers, active engagement with emerging and frontier markets, and development of export financing pathways. In the past year, there has been notable progress in this regard, including increased funding for the Advanced Reactor Demonstration Program, the launching of the State Department’s FIRST Program for capacity-building in emerging markets, new agreements on strategic civil nuclear cooperation, and a newly unveiled resource for developers to facilitate compliance with export control regulations and practices on international security and safeguards. Considering the big picture, it is crucial for us to ensure that this momentum continues.

How to Use This Map

Our map includes several features that will make it easy for policymakers and advocates to find useful information on potential advanced nuclear markets around the world. On the map, every country included in our analysis is marked with a circle. The size of each circle represents the magnitude of the projected increase in energy demand for the corresponding country. The color of each circle illustrates a country’s ranking on our 6-stage scale that assesses relative preparedness and motivation for the development of advanced nuclear power. You can find the complete dataset for our analysis here. The map contains seven filters that show:

In order to understand the potential global market for advanced nuclear technologies, we set out to determine two things: Where is the opportunity (using new energy demand), and where can nuclear power contribute in a meaningful way (using our “readiness” score)?

We define a country as “ready” for nuclear by considering if it could be a customer for an advanced nuclear supplier and credibly negotiate a purchase agreement with an international supplier country. We determine this by using a 10-point checklist covering internal institutions and controls such as policy and regulatory agencies, as well as external signals of interest such as engagement with supplier countries and international institutions like the International Atomic Energy Agency. More information on the scoring methodology can be found here.

To estimate future electricity consumption, we use historical data to establish a trend based on income correlations. We then extrapolate this relationship to 2030 and 2050 for each country, using data and forecasts from the United Nations, International Energy Agency, International Monetary Fund, and the World Bank. More information on the electricity projection methodology is available here.