To mitigate the most serious threats posed by climate change, we must get to net-zero carbon emissions as fast, and fairly as possible. This means using every clean energy technology we already have--and investing in innovation to deliver the technologies and fuels we still need--to eliminate climate pollution in every sector of the economy.

One of the most promising new technologies to help get to net-zero carbon is advanced nuclear energy, which could be paired with renewables to generate electricity, provide heat and power for industry, or produce carbon-free hydrogen to displace fossil fuels. Since 2015, Third Way has been tracking the evolution of advanced nuclear innovation projects in the United States and Canada.While this year has been particularly challenging for clean energy companies, the advanced nuclear sector entered this uncertain era with a solid foundation and has continued to make progress. (Data Collected by Third Way and Energy for Growth Hub) 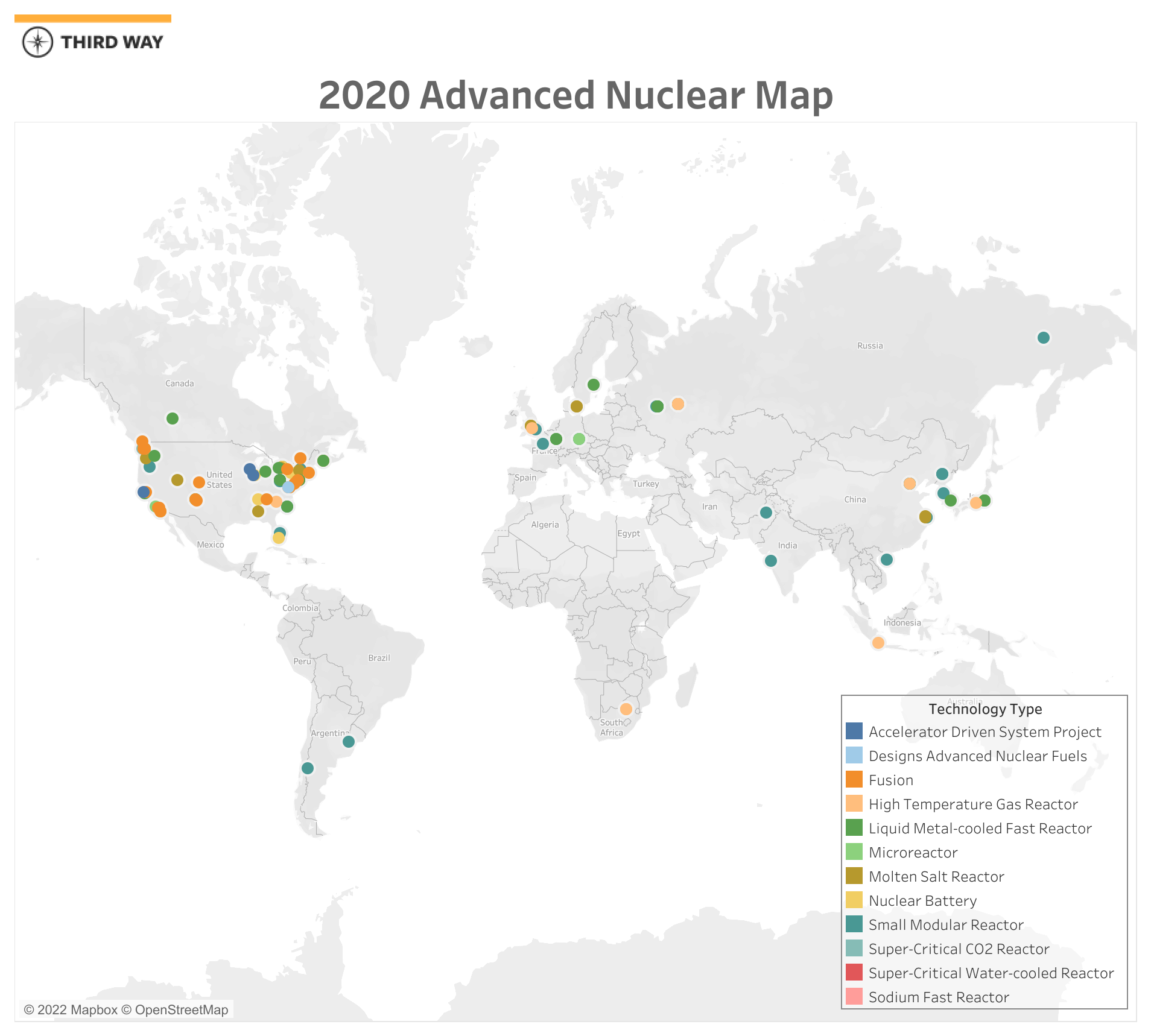 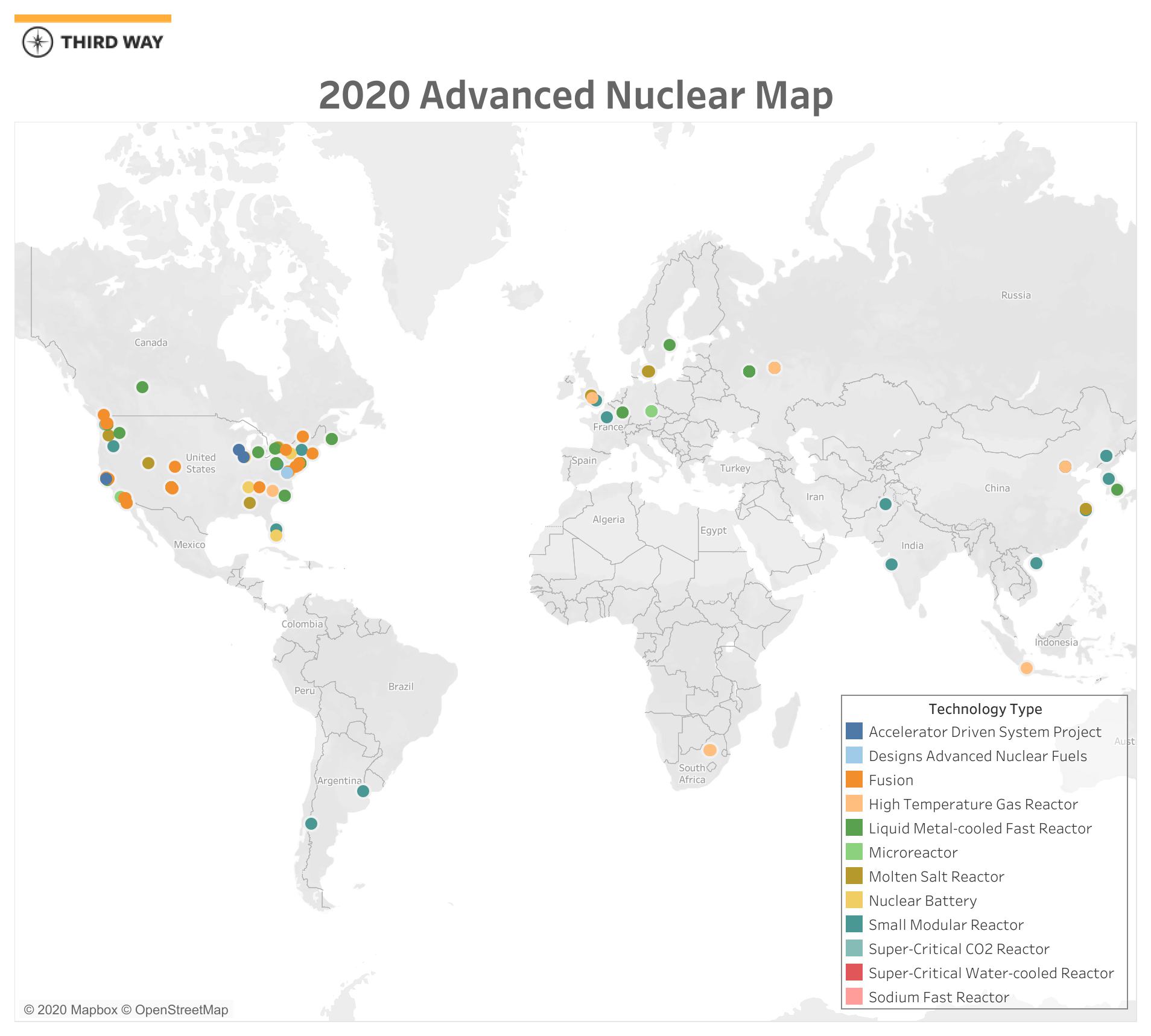 The US Department of Energy announced the selection of two teams to receive $160 million in initial funding under the new Advanced Reactor Demonstration Program (ARDP). Both TerraPower and its partner GE-Hitachi, and X-Energy were selected for cost-shared awards that will deliver two licensed and operational advanced reactors within seven years. The US Senate and House both voted to increase funding for the ARDP in their respective appropriations bills for FY2021, putting the program in a strong position to advance its work in the coming year.

There was also progress in three other promising avenues for deployment in North America. In March the US Department of Defense awarded contracts to BWXT Technologies, Westinghouse, and X-Energy to fund a two-year microreactor design competition. The Tennessee Valley Authority announced in April that it is evaluating companies to determine which type of reactor it will seek to build at its Clinch River site. And in Canada, Ontario Power Generation announced it will move forward on design work for three advanced reactors with three different developers: Terrestrial Energy, GE-Hitachi, and X-Energy.

The Nuclear Regulatory Commission (NRC) is making progress modernizing its processes for next generation reactors. In June, the Commission accepted the first-ever combined license application for a non-light water reactor for the Oklo Aurora microreactor. In August, NuScale received the first-ever standard design approval from the NRC for its small modular reactor design.

The NRC continues to move forward with rulemaking that will impact the future of all advanced reactor designs that will navigate the Commission’s licensing process. In October of this year, the Commission approved a proposed approach for developing the regulatory infrastructure to support the licensing of advanced nuclear reactors, with a final rule set to be released in 2024. These are important milestones, as we are expecting to see a steady stream of next-gen designs knocking on NRC’s door over the next few years.

The big news: For the first time, we’ve expanded the scope of our annual Advanced Nuclear map to capture advanced reactor designs under development worldwide, finding 130 projects in total. This international assessment, along with a new Global Markets map built with the Energy for Growth Hub, made two things crystal clear:

While the initial activity in privately designed advanced nuclear concepts has been focused in the United States and Canada, in recent years a number of entrepreneurial developers have sprung up across the world. In Europe this includes work in Sweden, Denmark, Luxembourg, the Czech Republic, and the United Kingdom. For a long time, Brexit seemed to spell doom for the future of advanced nuclear in the United Kingdom, but that may be changing soon. A consortium led by Rolls Royce is now working to design and deploy small modular reactors at former nuclear power plant sites within the UK. The group is also engaging with countries like Turkey to explore how SMRs could help meet growing energy demand.

Paving the Way for US Exports

As the United States moves towards demonstration and deployment of advanced reactors in the next decade, we must be able to offer assistance through different finance mechanisms to countries interested in engaging with U.S. companies. The lifting of the nuclear prohibition at the U.S. International Development Finance Corporation (DFC) was a positive step to support U.S. technology and climate mitigation efforts globally. The government should capitalize on this progress by ensuring that DFC, the Export-Import Bank, the Department of Energy, the U.S. Agency for International Development, and other relevant agencies have sufficient resources, tools, and flexibility to support advanced nuclear projects in a competitive global marketplace.

Even as the United States struggles to get control of the pandemic and respond to the economic crisis, we know we need to keep one eye focused on the future. That future requires us to address climate change and compete in a global market that will be hungry for clean energy. Given the progress of the last several years, and an incoming Biden Administration that is serious about pursuing an aggressive and technology-inclusive approach to climate change, advanced nuclear is shaping up to be a key component in the global race to zero emissions.