In June of 2015, Third Way released a report identifying 48 companies and research institutions across the country developing advanced nuclear technology. For the first time, each project and its unique technology was catalogued in a central location to provide a snapshot of this emerging industry. These projects included private companies as well as projects with high commercialization potential that are being conducted and/or housed at universities and national laboratories.

Advanced nuclear has captured quite a bit of attention in Washington since that report came out. In November of 2015, the White House, along with Third Way, hosted a Summit on Nuclear Energy and subsequently announced the launch of the Gateway for Accelerated Innovation in Nuclear (GAIN) program—aimed at helping nuclear innovation start-ups get greater access to the resources and expertise of the national labs. Congress has also taken part in supporting the advanced nuclear industry, with bills moving rapidly through both the Senate and House to enhance federal R&D efforts and modernize regulations for advanced reactors. Advanced nuclear innovators are becoming a regular presence in Washington, testifying before Congress, leading working groups with the Department of Energy and the Nuclear Regulatory Commission, and participating in panels on clean energy policy.

However, as in any nascent industry, most of the pioneering innovators in advanced nuclear won’t make it to the end of the commercialization pipeline. That’s just the nature of innovation. Our updated map and table reflect the cancellation of several projects that were previously featured. We’ve also added a handful of new projects that have emerged since our initial report, and adjusted certain entries to more accurately reflect the engagement of multiple sponsors on a single project. 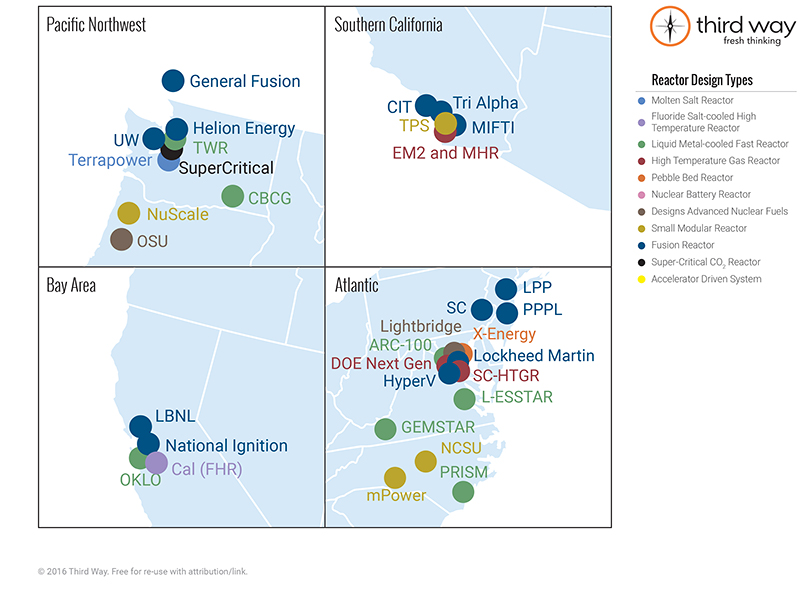 JPGs of our infographics can be found on Flickr.