It takes a considerable amount of time to sift through 30 chapters of a trade deal. To help policymakers as they evaluate the Trans-Pacific Partnership (TPP), in this memo we tackle one critical area: agriculture. Below, we summarize TPP’s major agriculture provisions and then show what U.S. producers stand to lose if this trade deal is delayed or blocked.

What Are the Major Ag Provisions in TPP?

Because every dollar of agricultural exports stimulates another $1.27 in business activity, it’s critical for policymakers to fully understand how a trade deal affects the sector overall. Here are three important agricultural issues in TPP.3

#1: Market Access. The fact that TPP cuts or eliminates more than 18,000 tariffs is often cited. Within that number, though, is a massive amount for American agricultural producers. Lowering the tariffs (i.e. taxes) that other countries put on American agricultural products helps make our products more affordable for foreign consumers—and therefore more enticing to buy. For example, once the TPP agreement is implemented, tariffs as high as 10% on U.S. cotton exported into Vietnam will be eliminated, and Japan’s “gate price” duty on pork will be reduced by 90%.4

#2: Food Safety. U.S. food safety laws will not change at all under TPP, as the deal affirms that American agencies can regulate food safety. TPP, however, does work to ensure that our foreign partners develop and implement food safety standards in a transparent way, using science-based criteria—as we do in the U.S. Food safety obligations are also enforceable to ensure these standards are properly applied.5

#3: High-Standard Rules. TPP includes a host of other provisions that ensure the region’s agricultural standards are raised and that American producers can fairly compete. As part of TPP, all countries are required to eliminate agricultural export subsidies on all agricultural goods sold in TPP countries.6 For example, Mexico will not be able to use export subsidies on its wheat sold in TPP markets. Similarly, Canada’s domestic supply management system imposes prohibitive tariffs on dairy, poultry, and eggs from other countries, while their export subsidies for dairy provide an unfair advantage for Canadian products entering other markets. TPP eliminates export subsidies among the TPP countries, and provides new access to Canada’s dairy, poultry, and egg market for the first time.

Also, for the first time in any U.S. trade deal, TPP specifically covers the products of agricultural biotechnology. Over 90% of U.S. corn, soybean, and cotton exports are derived from biotechnology, and the deal includes transparency, information-sharing, and shipping provisions. TPP also includes new rules to protect the use of common names when marketing food products, guarding against efforts by some of our competitors to limit the use of terms like “parmesan” and “feta.”

What Do U.S. Producers Stand to Lose Without TPP?

To put it simply: we risk being shut out of the fastest-growing markets in the Asia-Pacific.

The vast majority of consumers are price sensitive, and if our goods are marked up by a foreign government through tariffs it makes them less competitive. But there’s another critical reason why we need TPP’s market access provisions as soon as possible—other countries are racing to lock in their own lower, preferential rates. This makes their commodities more affordable and, thus, more enticing to foreign consumers—putting U.S. products at a huge disadvantage.

To demonstrate what this means in practice, let’s look at how one of our competitors in the region—Australia—has worked to seize opportunity for its agricultural producers, both within the Japanese market as well as Southeast Asia more broadly.

The Japanese market is huge. In 2014, Japan imported almost $800 billion of products and services, making it the sixth biggest market for exports in the world.7 Within this, Japan imported nearly $60 billion in agricultural products, 20% of which came from the United States.8 But the Japanese market is also highly protected—Japan has tariffs and trade barriers on foreign products ranging from potatoes and pork to rice and cheese.

For Australia, the Japanese market is critical. In fact, it is Australia’s second-largest agricultural market. Understandably, they wanted to cut a wide range of tariffs in order to, as their government proclaimed, “Deliver significant benefits and opportunities to Australian farmers and agricultural producers.”9 To make their products more competitive, they negotiated a trade deal called the Japan-Australia Economic Partnership Agreement (JAEPA), which entered into force in January 2015.

This wasn’t Australia’s first attempt to make inroads in the region. In 2009 the ASEAN-Australia-New Zealand Free Trade Agreement (AANZFTA) was signed and entered into force in 2010. This trade zone, which Australia dubbed “one of the most dynamic economic regions in the world,” has a GDP of over $4 trillion, and Australia’s two-way trade with these 11 countries comprised nearly one-quarter of Australia’s total trade.10

Amid these trade deals, one thing is crystal clear: barriers for Australian agricultural producers have dropped drastically in Asia—making their products more competitive. Without our own trade deal in the region, U.S. products risk being more expensive and, thus, far less enticing. Just take a few key commodities:

“Australian wine exporters have been under pressure in the Japanese market, holding volume but losing value. JAEPA gives us the ability to claw back sales.”

The Japanese consume a lot of foreign wine. In 2013 (the most recent data available), Japanese consumers drank 3.3 million hectoliters of wine—or 87 million gallons—two-thirds of which was imported.12 In order to tap into that market, Australian and American wine previously faced tariffs up to 15% for some varieties and 182 yen/liter (approximately $1.55/liter) for others.13

But, now that the Australians have negotiated JAEPA, everything from Australian bottled and sparkling wine to sherry and port will see their tariffs phased down to zero.14

Last year, the United States produced 835 million gallons of wine across states ranging from New York and California to Oregon and Virginia.15 But when we ship that wine to Japan, our producers still face a tax of up to 15% or 182 yen/liter16—putting us at a huge disadvantage. But with TPP our rate would also get phased down to zero.17

“JAEPA will provide a very liberalising outcome across horticulture resulting in quick tariff elimination on the vast majority of Australian exports.”

From 2013 to 2014, Japan imported over 87,000 metric tons (or 191 million pounds) of oranges. But both Australian and American citrus farmers selling into that market faced tariffs of 16% on oranges imported during the months of June through November, and 32% during the period December to May.19

Now? JAEPA phases the tariff to zero for Australian farmers for the period June through September.20

Yet, American producers still face barriers. We produced nine million tons of citrus across Florida, California, Texas, and Arizona21—that’s a whopping 147 million boxes of oranges.22 Yet our oranges are taxed if we want to ship them to Japan. TPP, however, would bring our rates to zero throughout the year.

“JAEPA delivers Australian beef producers and exporters an unprecedented competitive advantage in their most important market.”

Japanese demand for beef has historically been very high, importing 740,000 metric tons (or 1.6 billion pounds) of beef in 2014.24 However, Japan placed very high tariffs on beef imports to protect their local industry and encourage domestic production. Both Australia and the United States faced Japanese tariffs of 38.5%.25

With JAEPA, tariffs on beef from Australia dropped substantially, with the tariff rate for frozen beef falling to 19.5%.26

What does this mean for beef producers in Texas, Oklahoma, and Nebraska, among many other U.S. states that produce beef? American beef is put at a disadvantage compared to Australian beef. TPP knocks down these unfair and uneven trade barriers, so that the United States can compete on a level playing field.

“The Australian dairy sector should benefit from reduced barriers to trade with ASEAN countries and greater certainty in market access.”

The ASEAN region—comprised of 10 Southeast Asian countries from Thailand and Vietnam to the Philippines and Singapore—is one of the fastest-growing areas in the world, averaging 5.1% real GDP growth from 2000-2013.28 With this growth has come increased demand for a variety of products—including cheese. ASEAN’s demand for cheese in all forms (including processed, fresh, and grated) has rocketed up; cheese imports into the region are up nearly 50% since 2010. Vietnam, specifically, has increased its cheese imports by over 40%, to $25 million, between 2012 and 2014 thanks in part to the rise of fast food.29 But Australian and American producers faced Vietnamese tariffs on cheeses of 10%.

Now, through AANZFTA, Australia producers have a huge leg up—they have preferential tariff treatment into Vietnam, with all cheese tariffs removed by 2020.30 For example, imports of grated and powdered cheese are duty free in 2016, and tariffs will be eliminated completely in 2017 for processed cheese.

This puts American cheese producers from Wisconsin to California at a huge disadvantage. TPP, however, would cut the tariffs on our cheese to zero, making them far more competitive.

Asia will be the largest importer of food over the next generation, which means that U.S. producers will have vast new opportunities to sell their goods and services. But it also means that American farmers, ranchers, businesses, and workers face global competition for those markets. The Trans-Pacific Partnership is a critical tool to ensure that U.S. goods and services can compete overseas. We are in a global race for market share, and as we have seen with countries such as Australia, our delay is their gain.

To make their products more competitive in Asia, Australia negotiated a trade deal called the Japan-Australia Economic Partnership Agreement, which entered into force in January 2015. They also negotiated the ASEAN-Australia-New Zealand Free Trade Agreement, which entered into force in October 2015. Amid all the pages of text, one thing is crystal clear: barriers for Australian agricultural producers have dropped drastically—making their products more competitive. Without our own trade deal in the region, U.S. products risk being more expensive and, thus, far less enticing. For example: 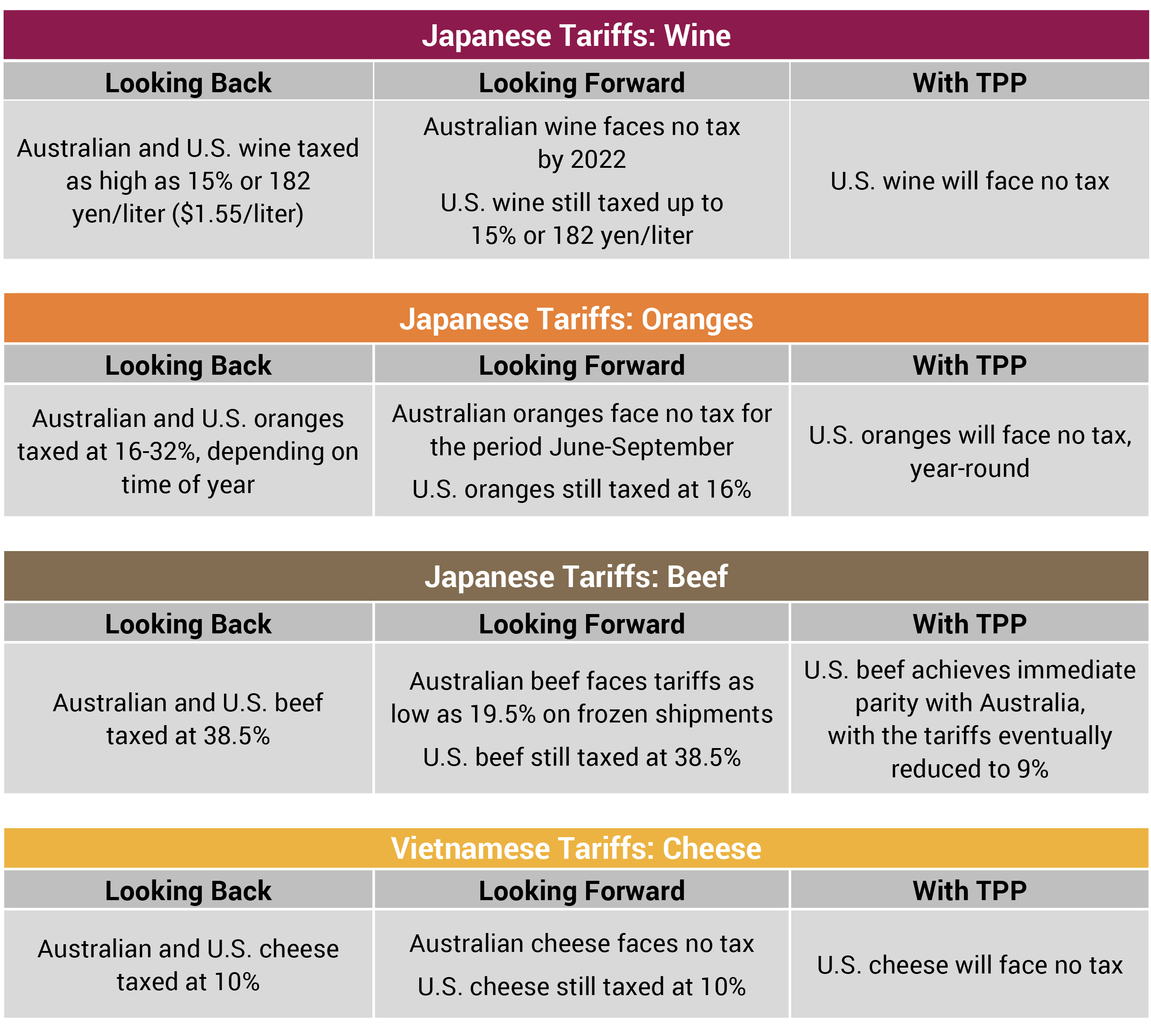