Now that the Trans-Pacific Partnership (TPP) trade deal is public, policymakers will be looking to better understand various components of it. One critical section: how labor is treated.

Modern trade deals need to do more than just ensure Made in the USA goods make it on foreign shelves—they need to include high standards that protect and allow Americans to compete safely and fairly. One key to that is ensuring that trade deals have adequate worker protections. In this memo, we summarize TPP’s labor provisions and how these standards compare to past U.S. trade deals.

What Are the Labor Protections in TPP?

Labor provisions in trade deals are judged on how they handle a number of important areas. Here are seven important issues in TPP:

1) Unions. 186 countries agreed to the International Labour Organization’s 1998 Declaration on Fundamental Principles and Rights at Work, an agreement that stipulates a number of basic worker protections, including the right to unionize and bargain collectively. Even though nearly every single county adopted this Declaration, many trade deals do not specifically include the ILO’s worker rights as part of their labor chapter.

TPP, however, mandates that all workers have the right to unionize and bargain collectively. Countries, like Vietnam, that currently do not allow independent unions for their workers would be required to update their laws to guarantee this right.

2) Exploitative Labor. Ending any exploitative labor practices is another ILO Declaration-backed right. This includes stopping all practices of forced labor, which includes the use of slavery, debt bondage, indentured servitude, trafficking, and abolishing child labor.

To further curb these practices, TPP instituted a new practice that requires that each country eliminate exploitative labor practices and also discourages the trade of goods that are produced by forced labor.

3) Employment Discrimination. As another right guaranteed by the ILO Declaration, this protection works to prevent discrimination based on race, gender, religion, age, or disability.

TPP includes protections against employment discrimination of every kind, which would apply to all workers.

4) Acceptable Work Conditions. Minimum acceptable work standards are internationally recognized labor provisions and can include a minimum wage, workplace safety requirements, and limits on hours of work, among others.

TPP requires protections related to acceptable work conditions for the first time in any trade agreement. The deal does not stipulate what the exact level of protection should be, because, for example, a Malaysian minimum wage might not be appropriate for Japan, given their difference in their respective cost-of-living levels. But TPP mandates that standards must exist for each country.

5) Coordination with Countries. Achieving high labor standards is nearly impossible without cooperation from countries within a trade deal.

TPP establishes mechanisms for cooperation and coordination between all 12 countries. This allows sharing of best practices, but also allows stakeholders to raise concerns when improvement is needed. Areas of cooperation can range from promoting entrepreneurship to increasing productivity in small- and medium-sized enterprises. To resolve any issue that should arise, TPP establishes a labor dialogue to mediate disagreements, while the dispute settlement mechanism can be used for more difficult issues.

6) Labor Plans. In a global economy, there are high-standards countries, like the United States, and those with lower worker standards. Trade deals have to often figure out a balance between countries with possibly very different track records.

TPP provides a path for countries with low worker standards to raise their standards and comply with the deal in a reasonable timeframe. Specifically, Brunei, Malaysia, and Vietnam all have made comprehensive and enforceable commitments to ensure each can meet TPP’s high standards. This includes firm targets and deadlines by which each must enact certain protections. And these labor plans must be fully enacted before they’re able to receive any tariff-reduction or market-opening benefits. And these commitments are also subject to dispute settlement mechanisms to ensure all countries stay on the track. Mexico is also working to develop labor reforms.

7) Enforcement. Trade deals must also focus on what to do if partners to the deal don’t meet their obligations. These protections and mechanisms for cooperation don’t mean anything if they aren’t given teeth. Enforcement provisions in past trade deals have included dispute mechanisms that could levy fines as well as cross-country dialogues to encourage countries to honor their commitments.

TPP builds on previous deals’ enforcement mechanisms and stipulates that countries failing to meet the labor standards in the deal are subject to a dispute settlement mechanism, the same one that is to be used for all the other parts of the trade deal. This means a country that violates the labor standards can face monetary fines, but also can have its trade benefits suspended.

How Do Past U.S. Trade Deals Compare with TPP on Labor?

Since 2002, the United States has enacted trade deals with 16 countries. In short, labor standards in modern U.S. trade deals have become stronger with each successive deal, with TPP having the strongest labor standards. While worker protections were an afterthought in deals like NAFTA, modern trade deals handle labor issues very differently.

Labor standards in modern U.S. deals can be divided into three categories: bronze, silver, and gold.

BRONZE: In the bronze category are the Bush-era trade agreements with Chile (2004), Singapore (2004), Australia (2005), Bahrain (2006), CAFTA-DR, Morocco (2006), and Oman (2009). In these deals, labor provisions are in the core of the agreement (not a side deal like NAFTA), and the agreements stipulate that each party must effectively enforce its own labor laws pursuant to the agreed upon internationally recognized worker rights.1 These agreements only had a single enforceable provision that mandated countries could not relax enforcement of labor laws in a way that affected trade. Put another way, a country couldn’t stop enforcing labor laws to encourage the production of more goods. In this category, the penalty for violators was simply a monetary fine, rather than suspension of trade benefits.

SILVER: This category includes recent FTAs with Peru (2009), Colombia (2012), Korea (2012), and Panama (2012). These FTAs took a stronger labor stance than previous deals as a result of the May 10th Agreement, a bipartisan compromise on labor language struck in 2007 that was to be part of future trade deals. Because of the May 10th Agreement, every labor protection is fully enforceable, and all parties are required to adopt and maintain the rights set forth by the ILO—and prevent any country from lowering their labor standards. Countries cannot neglect to enforce labor standards on account of limited resources; for example, a lesser-developed country couldn’t say that they didn’t enforce the deal because they simply couldn’t afford to do it. Further, the May 10th Agreement provided for trade sanctions (including monetary fines without a ceiling) to be used as well as the same dispute settlement mechanism used in other commercial parts of a trade deal.

GOLD: The crown jewel of all trade deals, TPP includes the highest labor standards for any trade deal ever. Building on the protections in the Silver category, TPP has stronger labor rights, better enforcement, and stiffer penalties for violators, which include stopping trade benefits. And, notably, TPP upgrades the labor provisions with six countries (Australia, Canada, Chile, Mexico, Peru, and Singapore) with which the United States already has FTAs. Further, any countries that wish to join TPP will be required to meet these standards before acceding; this practice will keep the high standards in TPP. 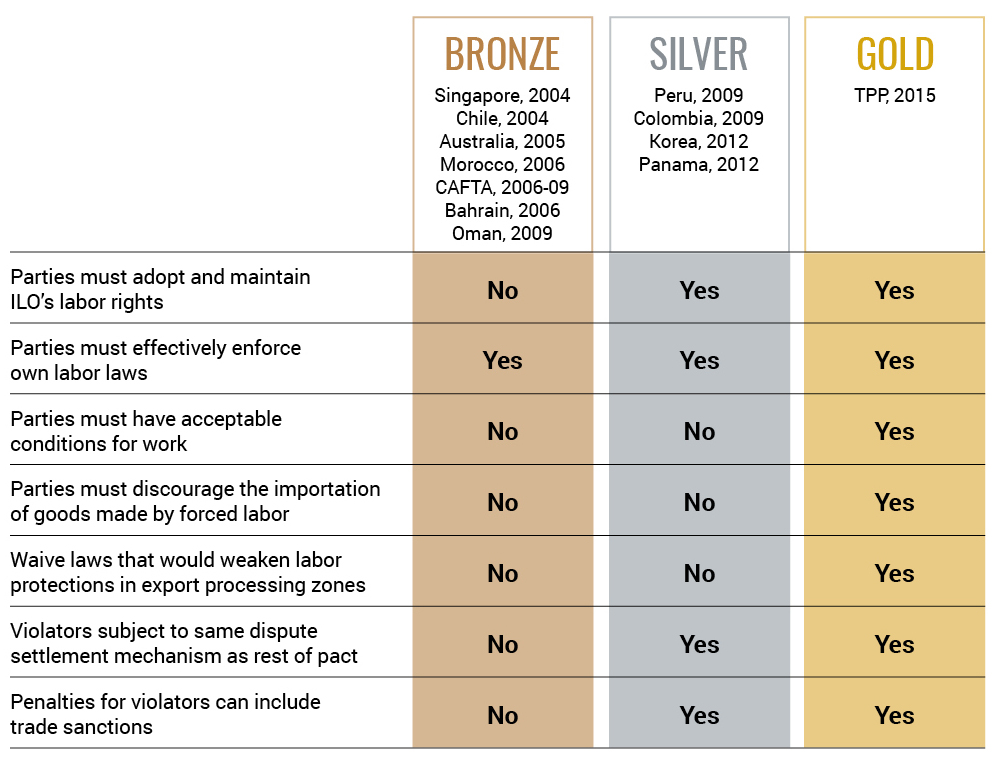 During the 2008 campaign, President Obama promised to renegotiate NAFTA to include enforceable labor rights. He has kept his promise; TPP has the strongest labor standards of any trade deal. Ever. This trade deal improves labor standards in all 12 TPP countries, allowing American workers and businesses to not only compete, but win, on a level playing field.