We published a follow-up report in January of 2023 to see if this one-year Red State murder epidemic was an anomaly. It was not. Despite a media narrative to the contrary, a wide and widening Red State murder gap has spanned the past two decades.

Every news outlet from FOX to CNN to The New York Times to local newspapers has a story with attention-grabbing headlines like “US cities hit all-time murder records.” Fox News and Republicans have jumped on this and framed it as a “Democrat” problem. They blame it on Democrat’s “soft-on-crime” approach and have even referred to a New York District Attorney’s approach as “hug-a-thug.” Many news stories outside of Fox have also purported that police reform is responsible for this rise in murder and have pointed to cities like New York and Los Angeles.

There is a measure of truth to these stories. The US saw an alarming 30% increase in murder in 2020. While 2021 data is not yet complete, murder was on the rise again this past year.  Some “blue” cities, like Chicago, Baltimore, and Philadelphia, have seen real and persistent increases in homicides. These cities—along with others like Los Angeles, New York, and Minneapolis—are also in places with wall-to-wall media coverage and national media interest.

But there is a large piece of the homicide story that is missing and calls into question the veracity of the right-wing obsession over homicides in Democratic cities: murder rates are far higher in Trump-voting red states than Biden-voting blue states. And sometimes, murder rates are highest in cities with Republican mayors.

We collected 2019 and 2020 murder data from all 50 states. (Comprehensive 2021 data is not yet available.) We pulled the data from yearly crime reports released by state governments, specifically the Departments of Justice and Safety. For states that didn’t issue state crime reports, we pulled data from reputable local news sources. To allow for comparison, we calculated the state’s per capita murder rate, the number of murders per 100,000 residents, and categorized states by their presidential vote in the 2020 election, resulting in an even 25-25 split.

We found that murder rates are, on average, 40% higher in the 25 states Donald Trump won in the last presidential election compared to those that voted for Joe Biden. In addition, murder rates in many of these red states dwarf those in blue states like New York, California, and Massachusetts. And finally, many of the states with the worst murder rates—like Mississippi, Kentucky, Alabama, South Carolina, and Arkansas—are ones that few would describe as urban. Only 2 of America’s top 100 cities in population are located in these high murder rate states. And not a single one of the top 10 murder states registers in the top 15 for population density.

Whether one does or does not blame Republican leaders for high murder rates, it seems that Republican officeholders do a better job of blaming Democrats for lethal crime than actually reducing lethal crime.

Trump-Voting States Account for 8 out of the 10 Highest Murder Rates in 2020.

If you’re tuned in to the media, you’d think murder is rocketing skyward in New York, California, Illinois. But those states don’t even crack the top ten.

In fact, the top per capita murder rate states in 2020 were mostly those far from massive urban centers and Democratic mayors and governors. Eight of the top ten worst murder rate states voted for Trump in 2020. None of those eight has supported a Democrat for president since 1996.

These red states are not generating “murder is out of control” national headlines. They seem to generate no headlines at all. The rest of the top ten were filled out by South Carolina, New Mexico, Georgia, Arkansas, and Tennessee—all states rarely talked about in breathless media reports about rampant crime in Democratic strongholds. Notably, New Mexico and Georgia were the only Biden-voting states in the top ten, and they ranked seventh and eighth, respectively. 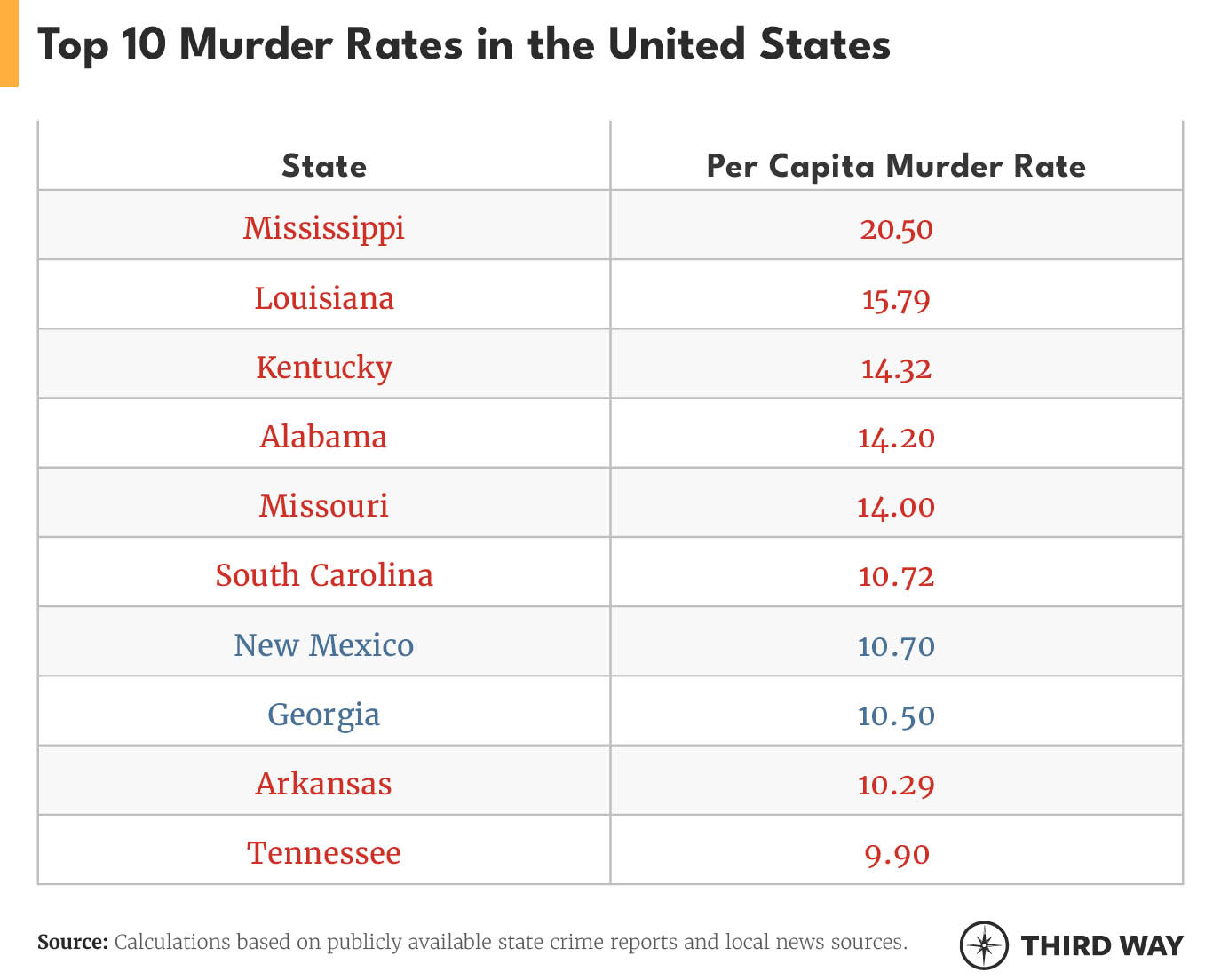 Of course, some cities controlled by Democrats have alarming murder rates, like Chicago (28.49) and Houston (17.32). But we hear about these and other Democrat-run cities all the time. We aren’t getting the whole picture. 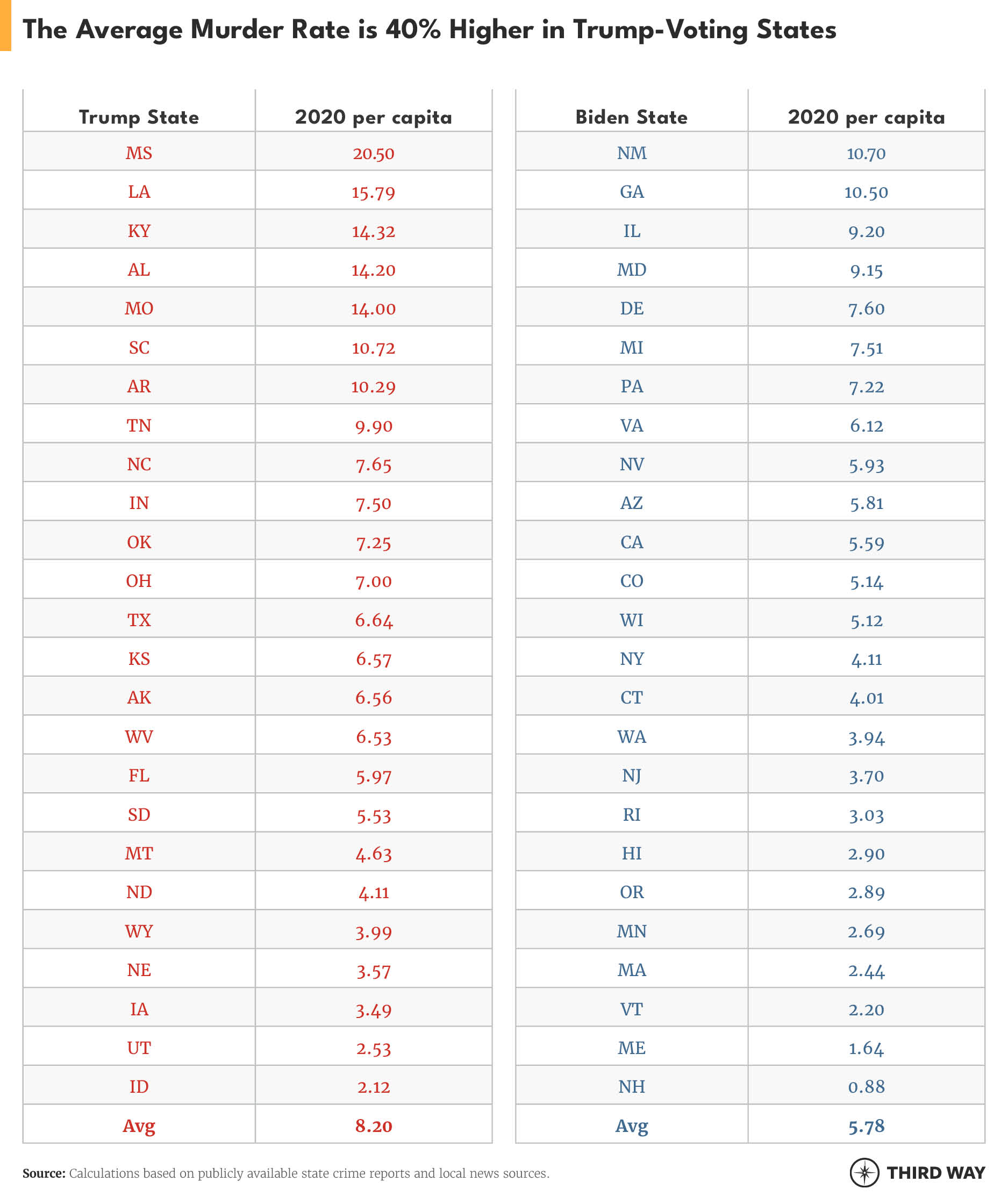 Between 2019 and 2020, Murder Rates increased slightly faster in Trump-voting states than Biden-voting states.

Three out of the five states with the highest murder rates in 2020—Mississippi, Missouri, and Alabama—didn’t have reliable 2019 data available, so they weren’t included in this analysis.

Three of the five states with the largest increase in murder rate were Trump-voting Wyoming at 91.7%, South Dakota at 69%, and Nebraska at 59.1%. These states are decidedly rural and do not conform to the chaos-in-the-city meme that has overtaken the crime debate. Biden-voting Wisconsin came in at the number three spot at 63.2% and Minnesota came in fifth at 58.1%. Out of the top ten states, six were Trump-voting states—with the additional three being Kentucky, West Virginia, and Kansas. The remaining states in the top ten were Delaware and Washington. Only one of the top ten states in murder rate increases, Delaware, was among the top twenty in population density. 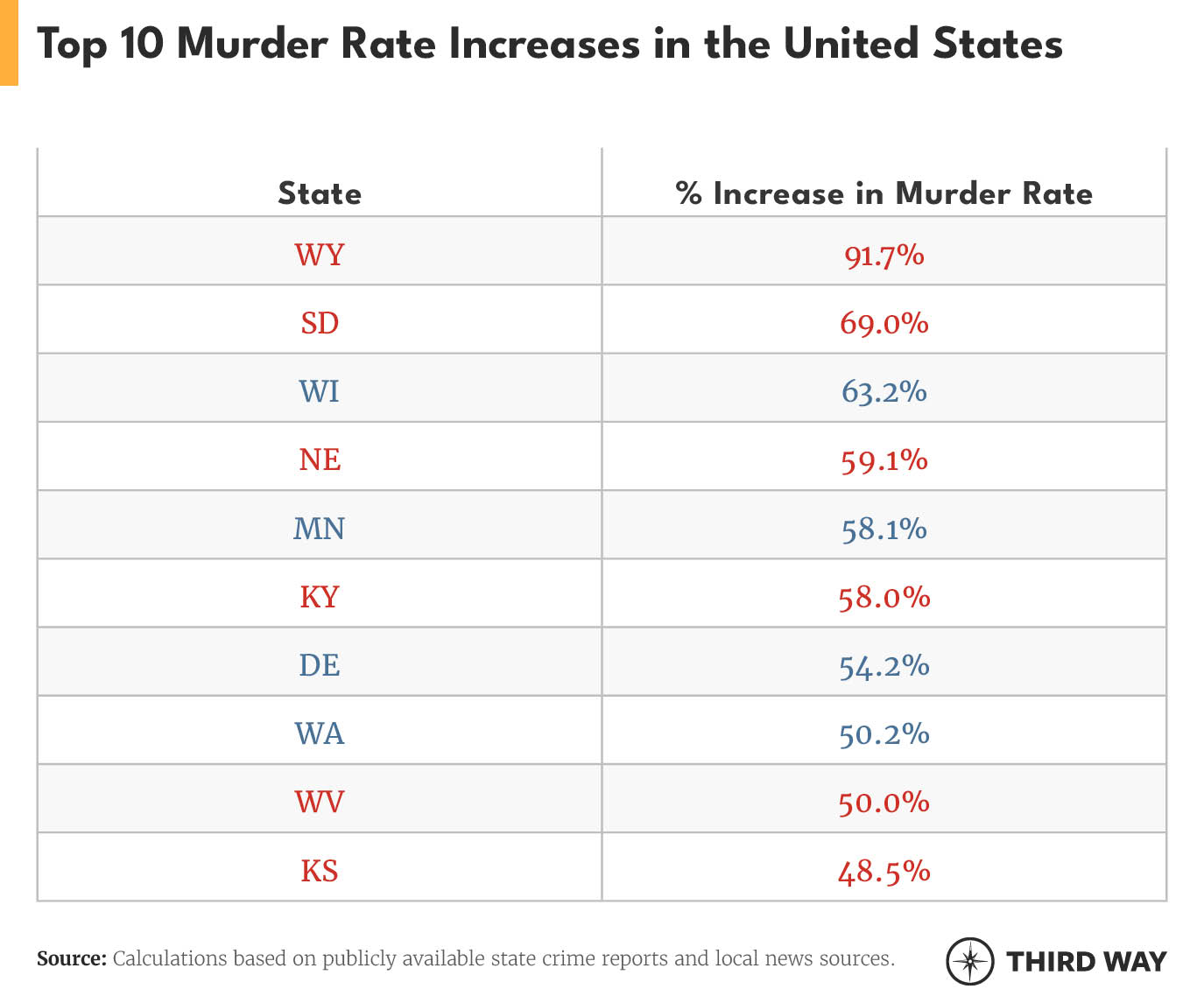 The current narrative around crime and murder is convenient and wrong. Whether you’re watching CNN or Fox News, or getting news online or from a traditional newspaper, you would think that the increase in murder is a phenomenon found mostly in liberal cities. Many have tried attributing this increase to Democratic policies, specifically police reform. Republican lawmakers and ad makers have contributed to this narrative through clever messaging and strategies.

But the data clearly paint a different story. The increase in murders is not a liberal cities problem but a national problem. Murder rates are actually higher in Republican, Trump-voting states that haven’t even flirted with ideas like defund the police. Eight of the ten most lawless, high-murder states are not only Trump-voting states, but GOP bastions for the last quarter of a century. A more accurate conclusion from the data is that Republicans do a far better job blaming others for high murder rates than actually reducing high murder rates.