The Crime of the Crime Narrative

Our findings are as follows:

Cities Under Siege! That is typical of the headlines in conservative news outlets about crime in America. For more than a year, Fox News and other right-wing outlets have pushed a narrative of lawlessness, chaos, and surging crime across America and in US cities. Headlines like “Police defunded: Major cities feeling the loss of police funding as murders, other crimes soar” and “Crime Soaring in Left-Wing Cities That Defunded the Police” are commonplace. “Expert” commentators on cable networks routinely blame the chaos, violence, and lawlessness on police reform and Black Lives Matter movements.

With all of the attention that the “crime crisis” has garnered, it should come as no surprise that Americans believe crime is up sharply. A June 2021 Washington Post poll found that 59% of Americans believe crime is an “extremely serious or very serious issue in America.” But only 17% say it is true for where they live. And in a July 2021 poll, 70% say crime is up across America, yet just 37% say crime is up where they live. Those two numbers cannot both be true. Crime cannot be up all across America except in the places where a representative sample of the United States collectively lives. So what is the truth? Is crime up? Are cities under siege? Are police so affected by protests that they cannot or will not do their job?

We collected data in the 23 jurisdictions (22 states and DC)1that have submitted full crime data in 2020 and made it public through their State Department of Public Safety or Department of Justice websites. We compared that to the 2019 crime data they submitted in those same 23 jurisdictions. These 23 jurisdictions represent roughly 51% of the United States population and a mixture of states with Republican and Democratic governors; big cities, small towns, and rural areas; and places where police reforms took place as well as those with no action. We looked at 7 major crime categories—murder, rape, aggravated assault, robbery, burglary, larceny, and automobile theft—as well as total crime as measured by each state. (There was insufficient up-to-date state data on hate crimes and domestic violence to include in our analysis.) We calculated the rate of change between 2019 and 2020 for each crime and the rate of change per capita (per 100,000 people) for total crime.

Our findings are as follows:

If police reform protests and legislation are the reason for rising homicide rates, we should expect to see increases in all or most crimes, not just a few crime categories. So the data belies the Fox News claims. Further research should be done to determine if recent dramatic increases in firearms sales and the relaxation of carry and stand your ground laws in many states are a factor in the rising homicide rate. But the evidence is clear: police reform is not driving a crime wave.

According to state crime statistics data for the 22 states plus the District of Columbia, for which we have complete information, total crime in the 7 crime categories we studied fell by 4.9% or 192,165 crimes between 2019 and 2020.2 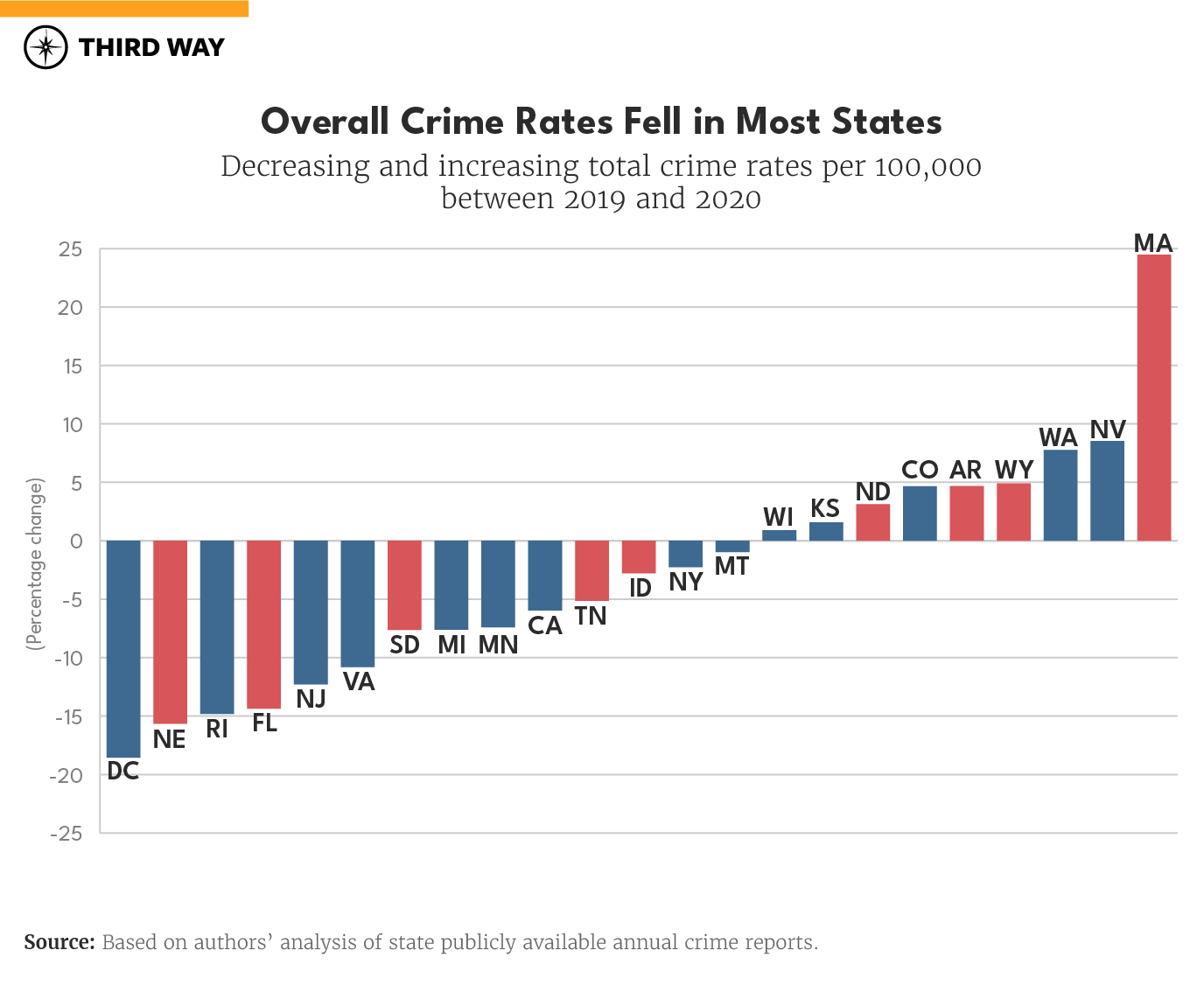 Finding #2: The spike in murder is unique to murder, not other crimes.

Murder rates in 2020 jumped in 22 of the 23 jurisdictions under study, but other major crimes either fell or rose only modestly.

To be fair to those concerned about rising crime rates, murder is unique and most noteworthy and most feared by people. A spike in the murder rate is alarming and should not be discounted. At the same time, it is also the rarest of crimes. In 2020, murders represented 0.2% of the seven crimes measured in our analysis. In the same year and in our 23 jurisdictions, rapes were reported 7 times as often as murder, assaults 48 times as often, and burglaries 54 times as often.

Murder is unique in another respect—it’s the only major crime that is having a sizable increase in prevalence. The spike in murders in 2020 is unique to murder, not other crimes.

Finding #3: There is no difference in crime trends between Republican-led and Democratic-led states.

Particularly in conservative media outlets like Fox News there is a drumbeat that overly permissive crime policies enacted by Democrats are putting Americans at risk to violent crime. The data does not back this assertion.

Wyoming saw a 92% increase in murders in 2020, the biggest increase of any jurisdiction in our study. Massachusetts at +0.6% had the smallest increase in murders. They both have Republican governors. South Dakota at +69.0% and Florida at +14.7% had the second highest and second lowest murder rate increases and are also both led by Republican governors. Wisconsin at +63.2% and Rhode Island at +18.5% have the third highest and third lowest murder rate increases and they each have Democrats as governors. In fact, in our 23 jurisdictions, three out of four states with the largest percentage increases in murder are governed by Republicans.

A cynic could look at 2020 crime statistics and make a credible case that having a Republican Governor will lead to more crimes. The truth is that crime is a multifaceted and complicated challenge in our society. There seems to be little, if any, correlation between which party controls the levers of political power and where crimes are committed.

Finding #4: There appears to be no correlation between policing reform and increased crime.

In 2020, 21 states from all across the country either passed legislation or issued executive orders to improve policing and justice. These reforms were implemented coast to coast and in red, purple, and blue states.

Colorado had the most aggressive reforms on policing in 2020. It passed broad ranging reforms on use of force, accountability, and training. It was the only state to reform qualified immunity. Among our 23 jurisdictions, Colorado’s crime performance was simply ordinary. It ranked in the middle of the pack on murder and rape rate increases at 13th and 14th, respectively. And it ranked last on burglary, but 3rd on auto theft.

Massachusetts passed new training requirements, created civilian-led oversight commissions, and reformed officer decertification in what was considered assertive police reform. Massachusetts saw the smallest increase in the murder rate among jurisdictions in our study, but the second largest increase in auto theft.

California and Nevada similarly passed new reforms banning chokeholds. Far from uncontrolled spikes in crime, they were below average on most measures. Meanwhile, Wyoming and South Dakota, both states with among the steepest increases in murder, assault, and auto theft, passed no police reform legislation.

Police reform in the wake of the George Floyd killing and other police abuses is new. It will take time to see the true impact that these reforms have on crime and public safety, if there is an effect at all. But the early data does not indicate any correlation between police reforms and crime trends.

The narrative that newly-enacted restrictive police policies and greater attention to police abuses has caused a massive increase in crime falls apart when looking at actual crime data. Crime is down, not up in America – at least in the 23 jurisdictions that have issued complete public information on crime in their areas.

The spike in murders is real, serious, and concerning. It’s also an outlier and the rarest of all crimes. It defies logic that police protests and reform would have an outsized effect on the jump in murders but have a benign, if not positive effect, on reducing most other crimes. If these police reforms and the spotlight on police abuses were behind murder rate increases, how could rapes, robberies, burglaries, and larceny be down?

So what is causing a rise in murders but not most other crimes? Perhaps it is some by-product of COVID that in some way causes some crimes to rise and others to fall. Perhaps it has to do with the huge increase in firearms sales over the past several years and the relaxation of laws in many states having to do with carrying of guns outside the home and permissive “stand your ground” laws that give people greater opportunity to be armed and discharge a weapon. 23 million firearms were purchased in 2020, an all-time US high. Twenty-seven stand your ground laws have passed state legislatures since 2005.

As noted earlier, crime is a complicated, multifaceted issue. It is ripe for demagoguery and fear-mongering. People believe crime is rising, just not where they live. Thanks to an overheated media, they are half right.