How States are Leading the Way on Policing Reform

Last summer, communities galvanized and forced a national reckoning on racial equity and policing. Bold federal legislation was introduced and passed by the House of Representatives, but unfortunately it was promptly ignored by the Senate and Trump White House.

Yet at the state level, legislatures across the nation were far from idle. In just six months, state legislatures passed a sweeping array of bills that reflect many of the same proposals that were thwarted in Congress. Across the nation they are showing that policing reform is viable in blue, purple, and red states alike. Here’s a round-up of how states made progress on policing reform in 2020. 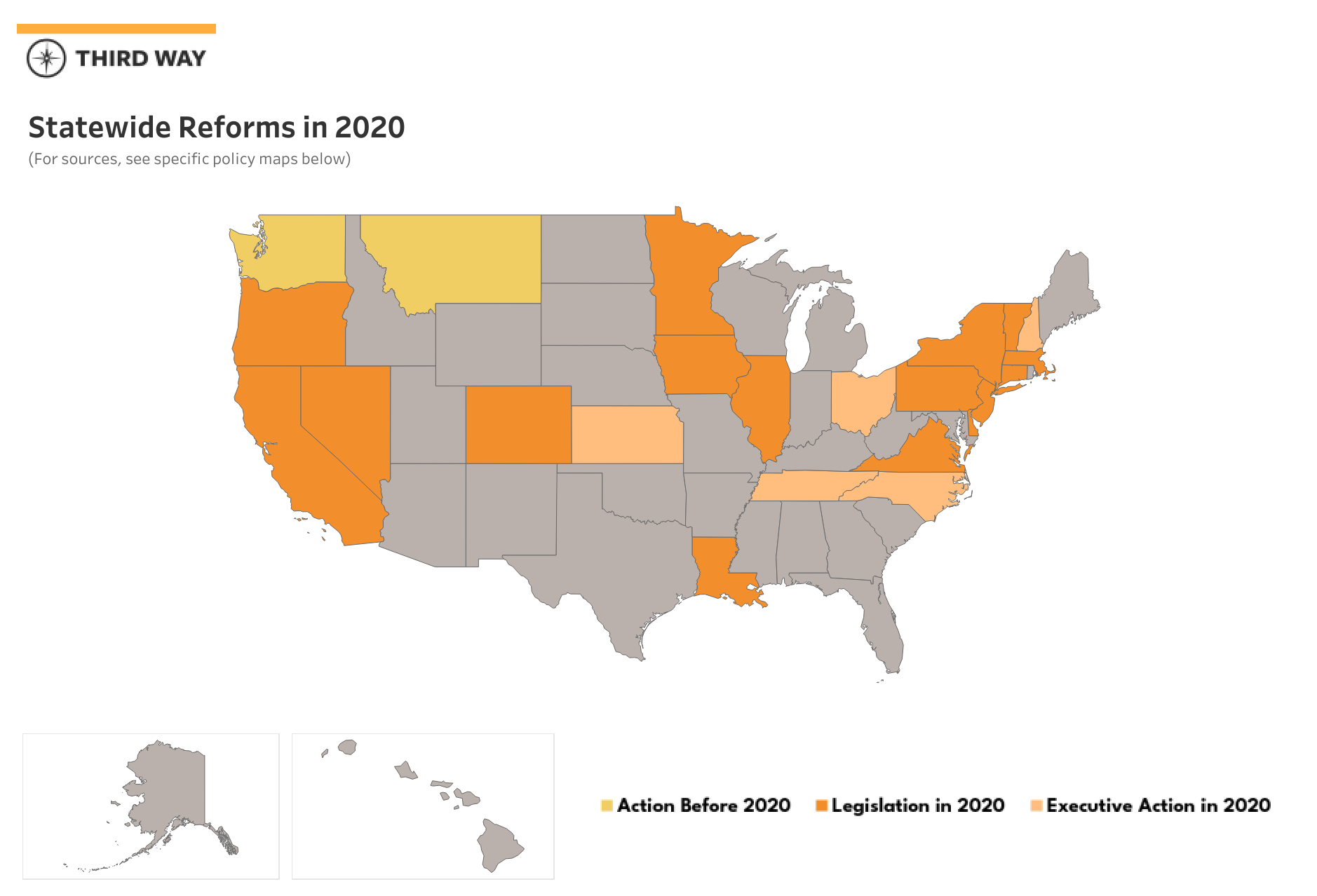 After the tragic incidents of last summer, use of force was at the forefront of the national debate—and state legislatures took notice. The most widespread reform by states was in use of force standards. Jurisdictions across the country enacted new restrictions on when police officers were allowed to use force and what type of force they were permitted to use. Most common in these restrictions were chokeholds, a ban on which had seen pervious momentum in other states after the killing of Eric Garner. Ten states in total banned chokeholds over the last year, and 4 states took other action related to use of force. 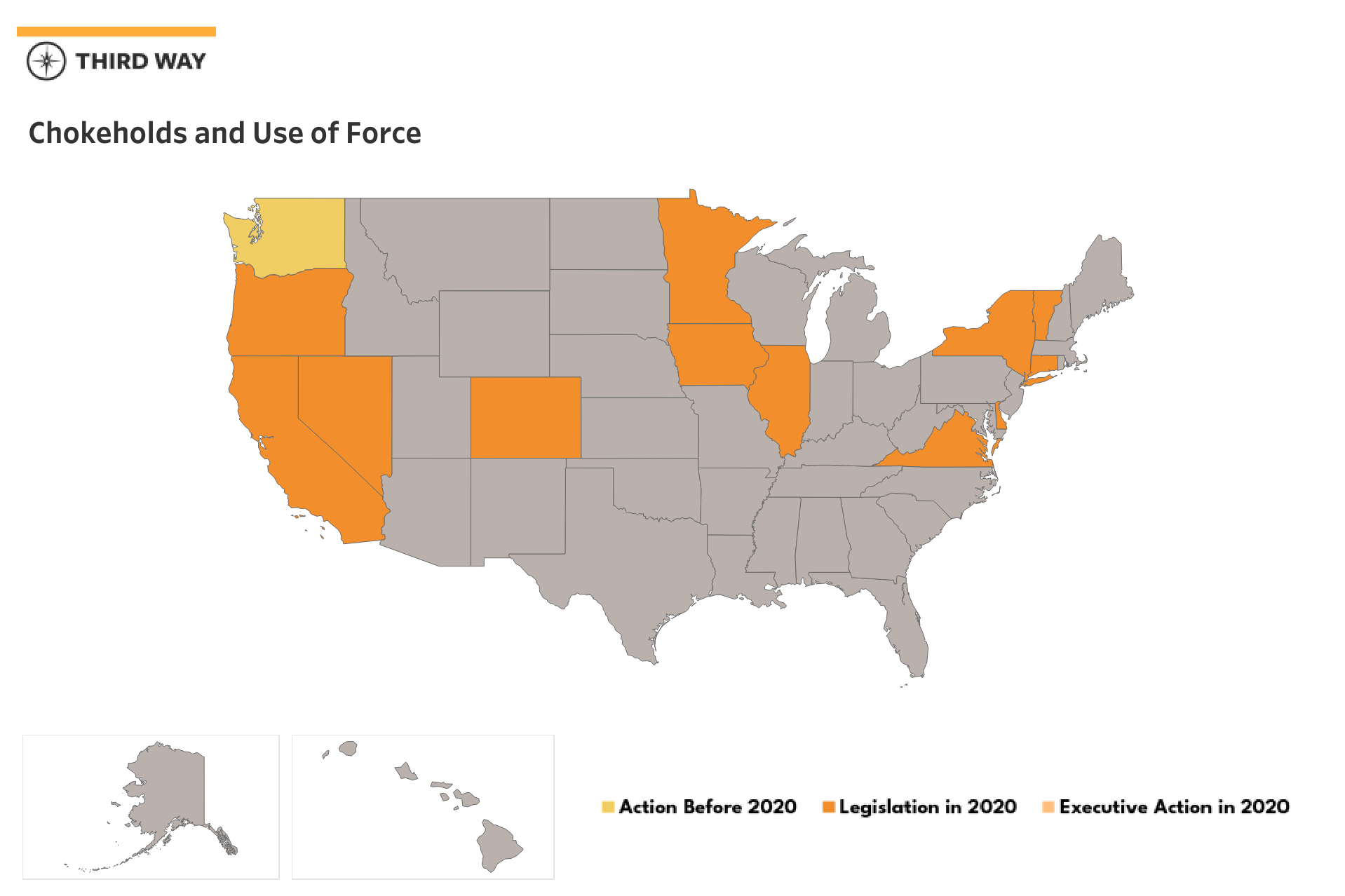 Independent oversight and greater accountability for police wrongdoing have been key calls by reform advocates for years. Our policing standards can only work if they are enforced. To that end, five states took action to either create independent oversight commissions or investigatory bodies in 2020. 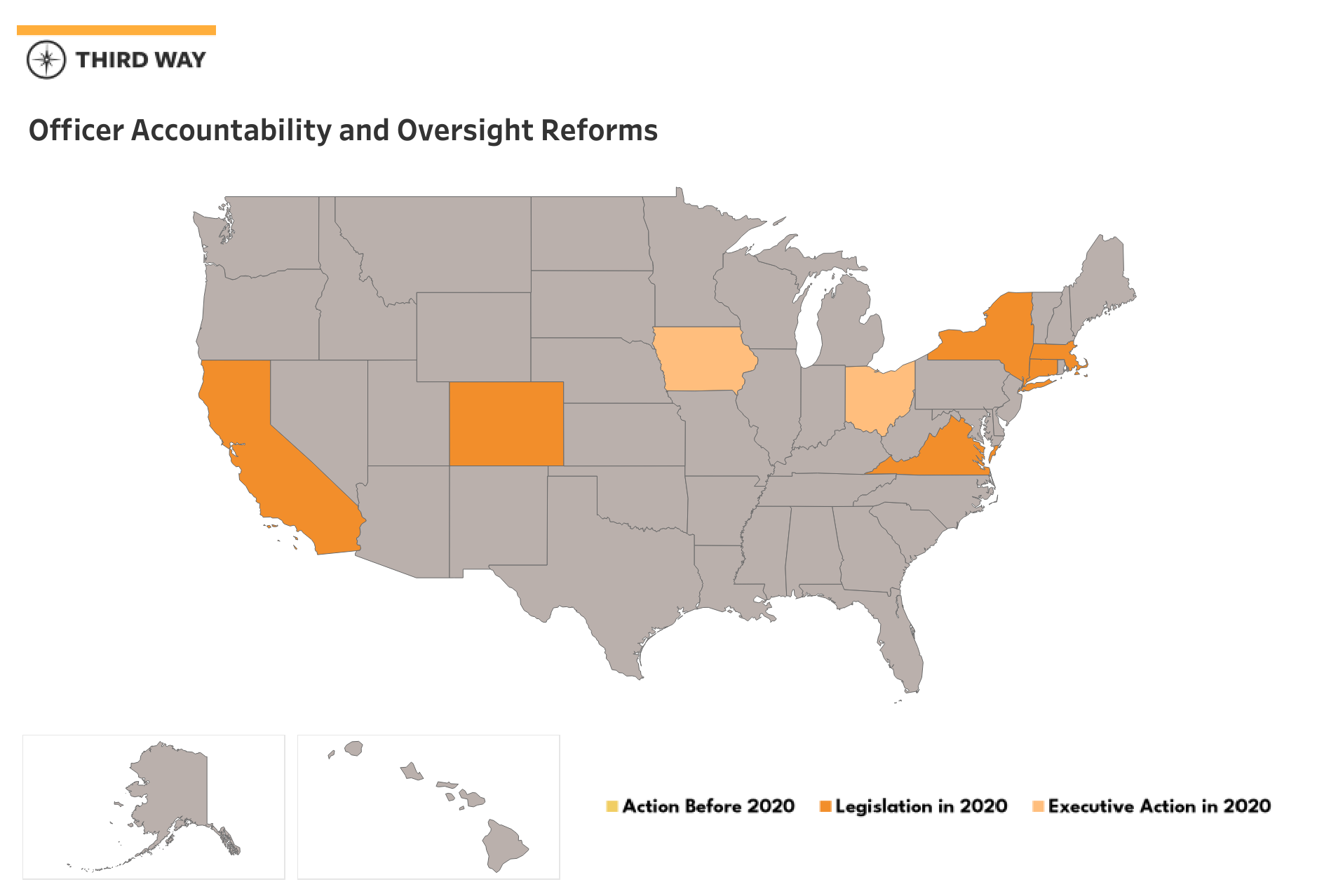 Implementing better policies and standards requires education and training. Like so many other professions, effective and just law enforcement requires continual professional education for officers. To that end, multiple states improved their training standards, with a focus on de-escalation and bias. 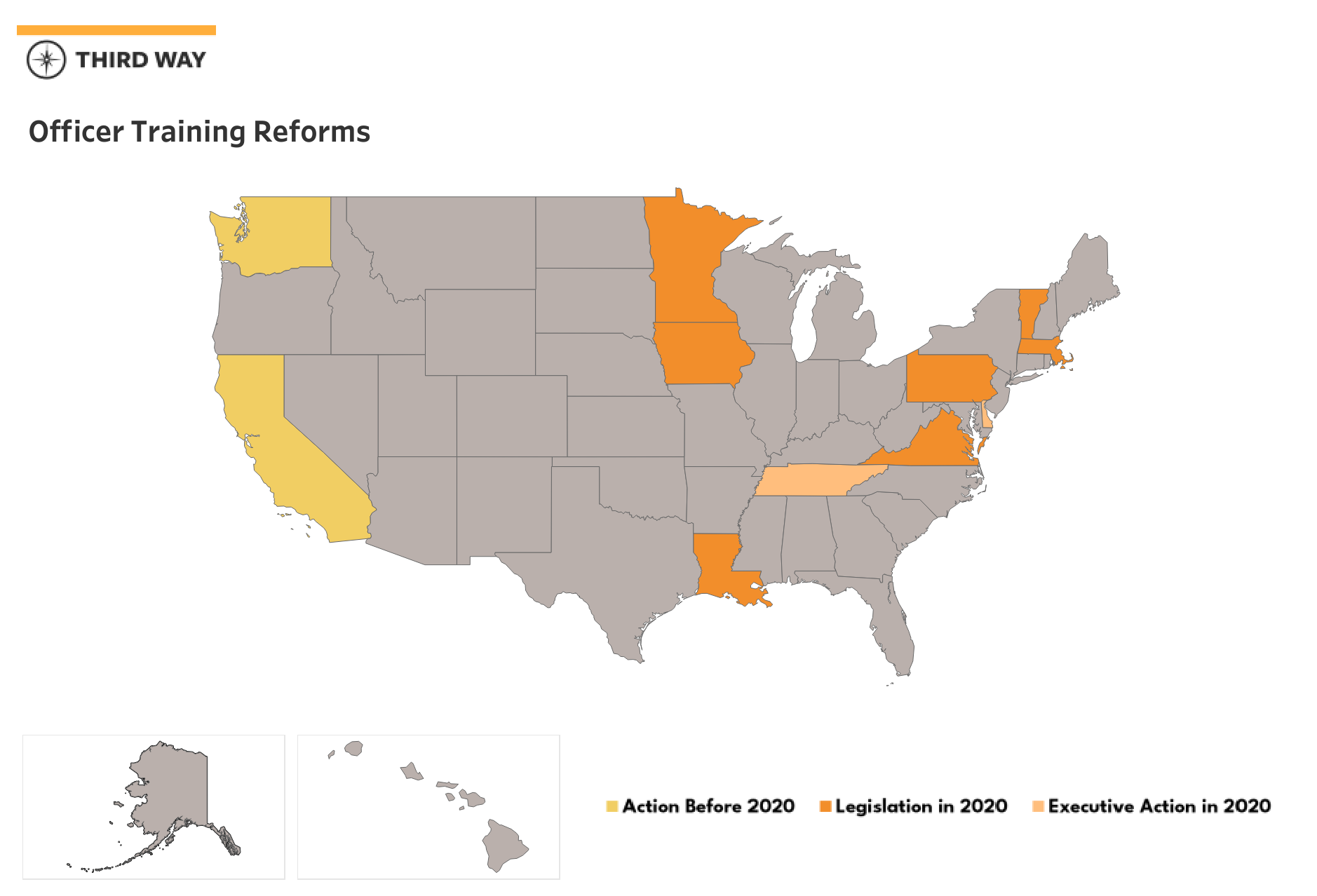 While certainly not a comprehensive solution for injustice in policing in America, body cameras can be an important tool to increase safety and accountability. We have seen a growing number of states and localities adopt body camera requirements over the past decade. And in 2020, five states across the country added them as a requirement for state police offices, bringing the total number of states requiring body cameras to eight. 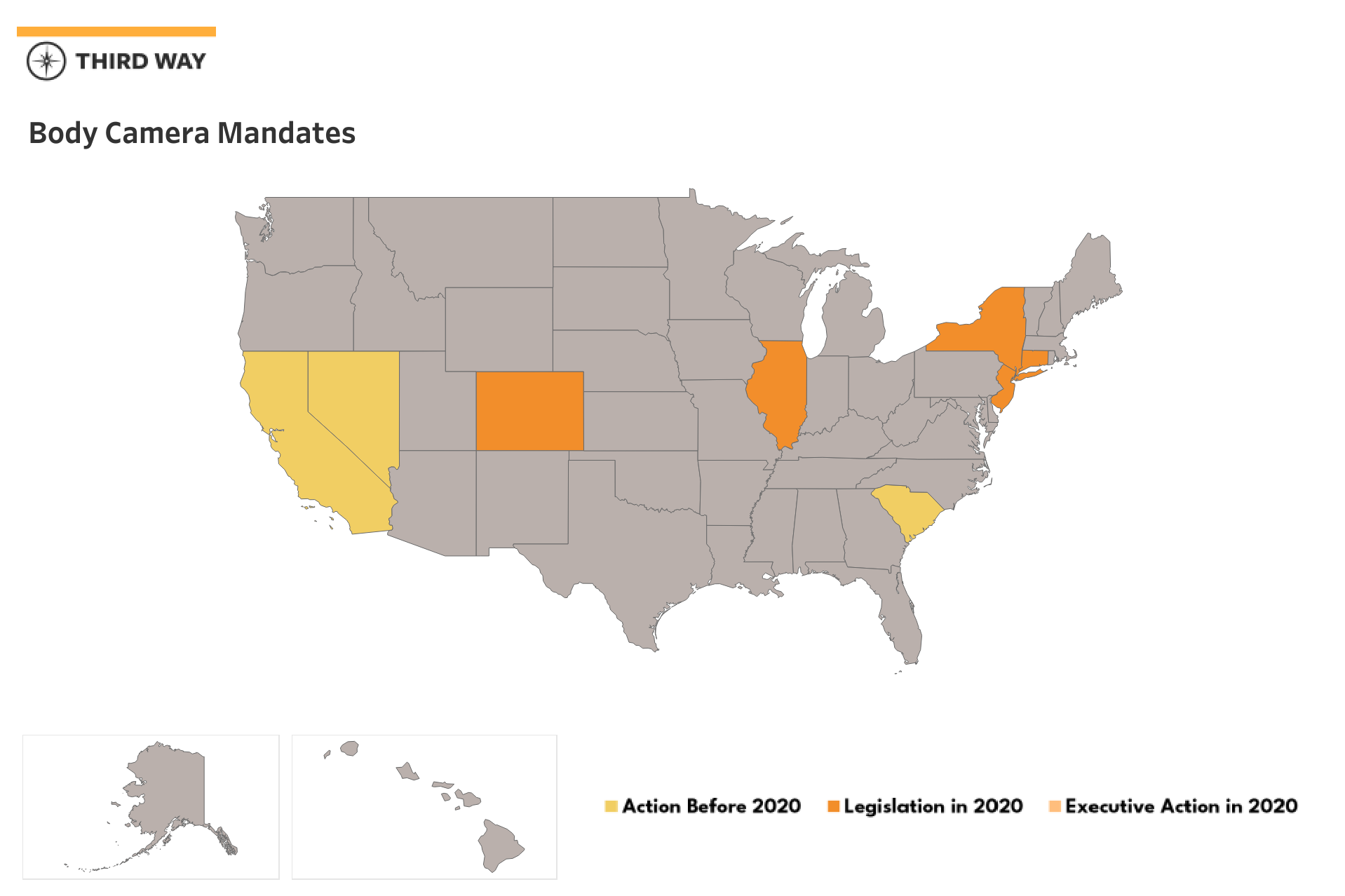 For years now, state and local police acquisition of military equipment like armored personnel carriers and tear gas have become increasingly controversial. The debate around use of these items by domestic law enforcement gained momentum following demonstrations in Ferguson, Missouri in 2014, and it was renewed during the protests of last summer.  Three states restricted the acquisition or use of military equipment in 2020. Connecticut, Illinois, Oregon, and Virginia passed legislation preventing the purchase of military equipment by state and local police departments. And Oregon passed legislation that bans the use of tear gas and acoustic devices used for crowd dispersion. 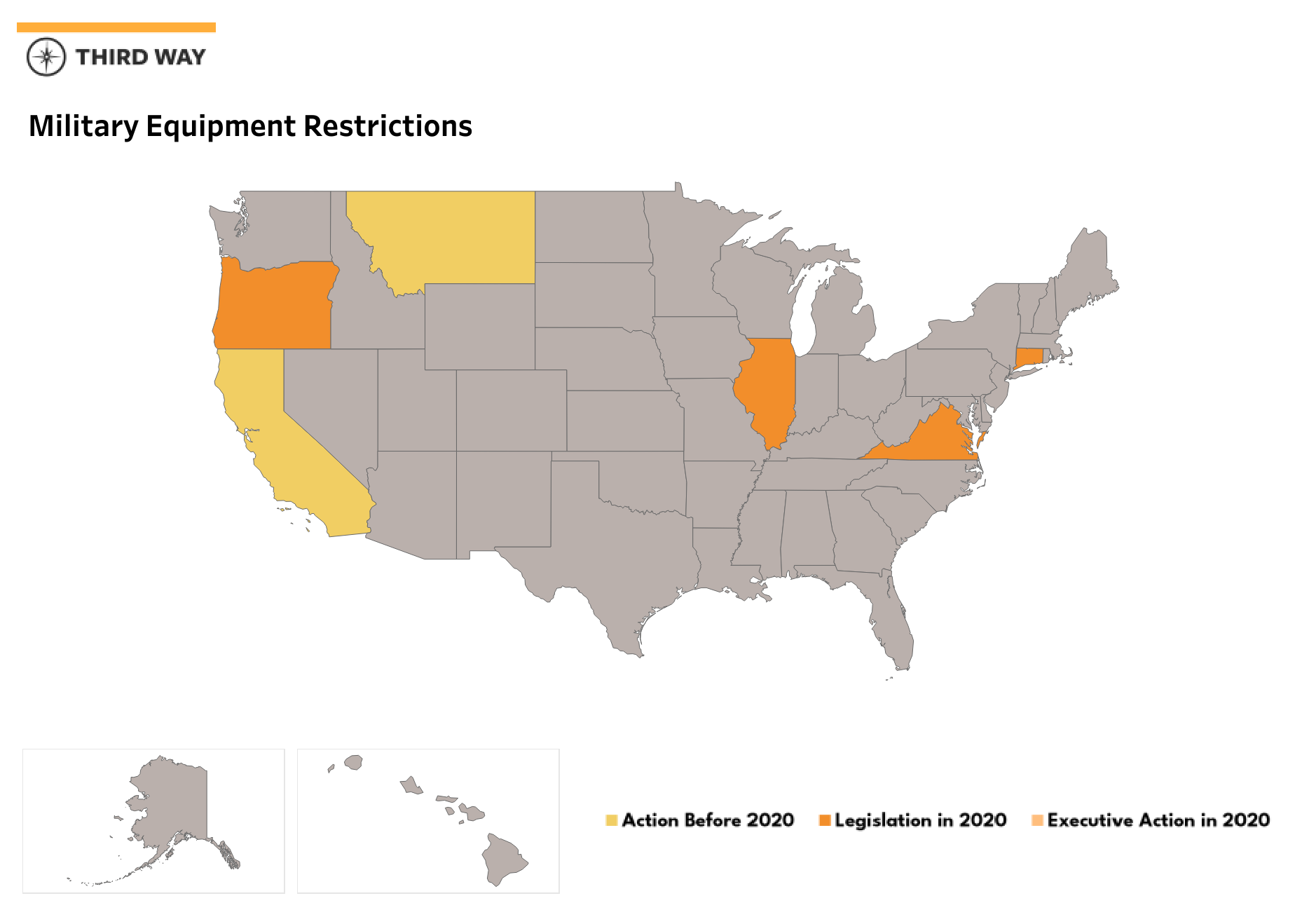 A legal duty to act or intervene increases accountability and good policing by creating collective responsibility. It cannot be acceptable that officers sworn to serve and protect the community can stand idly by if they witness fellow officers breaking the law or policing standards. Five states passed legislation obligating police officers to act if they witness misconduct or an emergency. 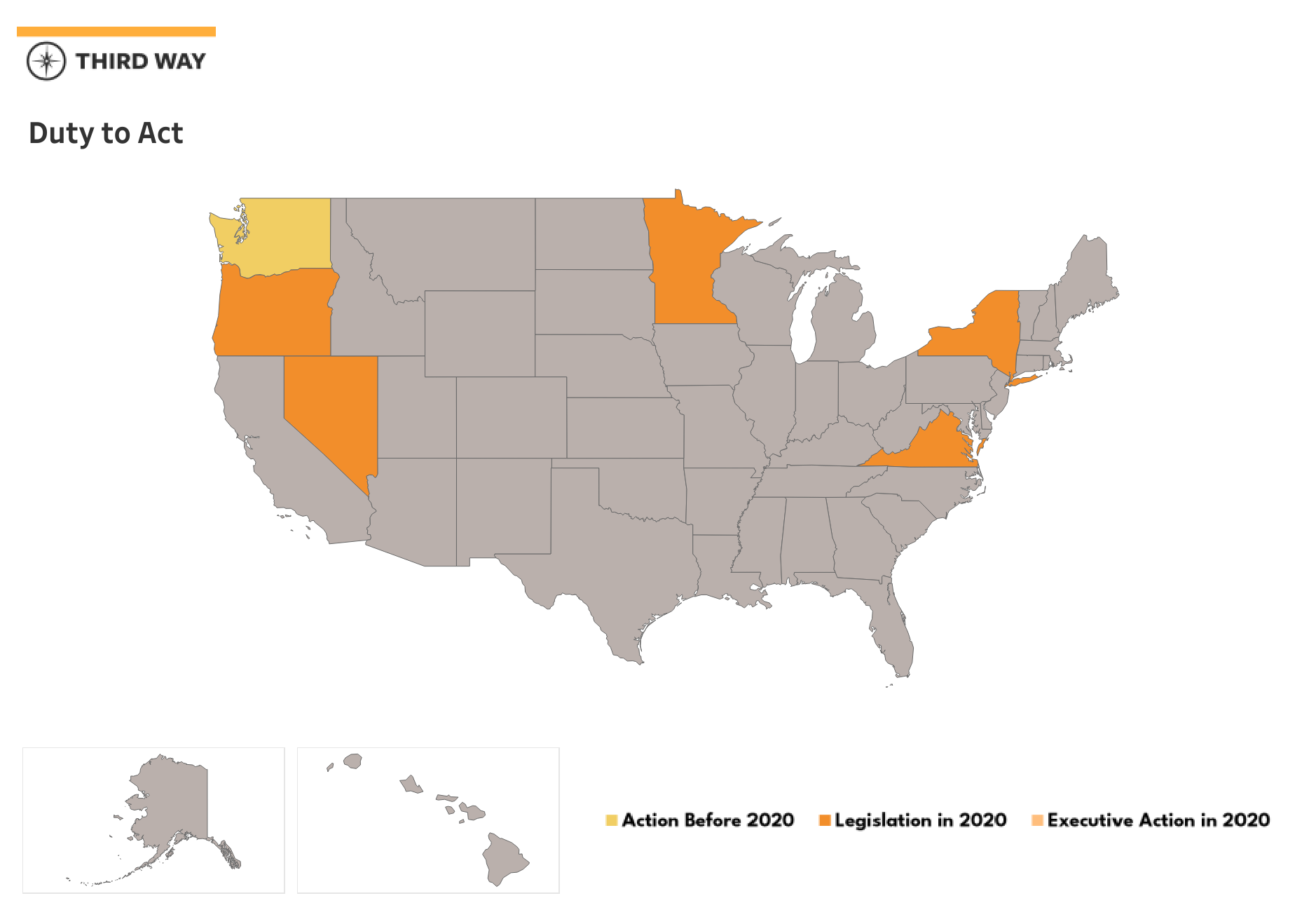 It can be incredibly difficult to remove officers with problematic or illegal conduct from police departments. And even if one department removes an officer for misconduct, he or she can often relocate to a different department and the problem of bad policing, discrimination, and violence persists. Decertification provides a process, with oversight, to ensure that officers who commit serious violations are not able to pick up and move elsewhere. 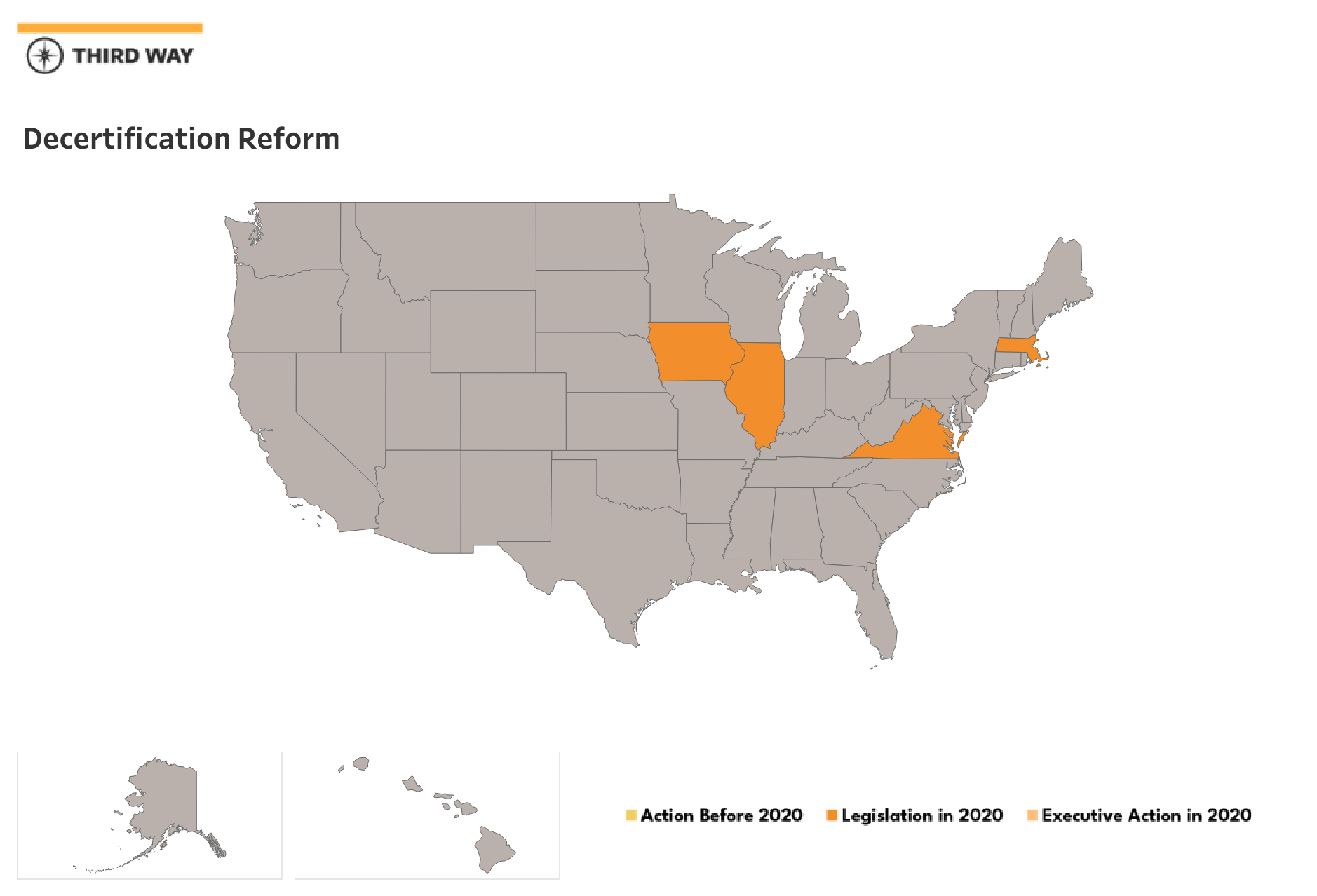 Ensuring proper hiring due diligence and public recordkeeping is also critical to improving policing. Dismissing an officer for misconduct does the public little good if that individual’s record is sealed and not visible to the community—or future employers. These four states improved records transparency and hiring standards in 2020. 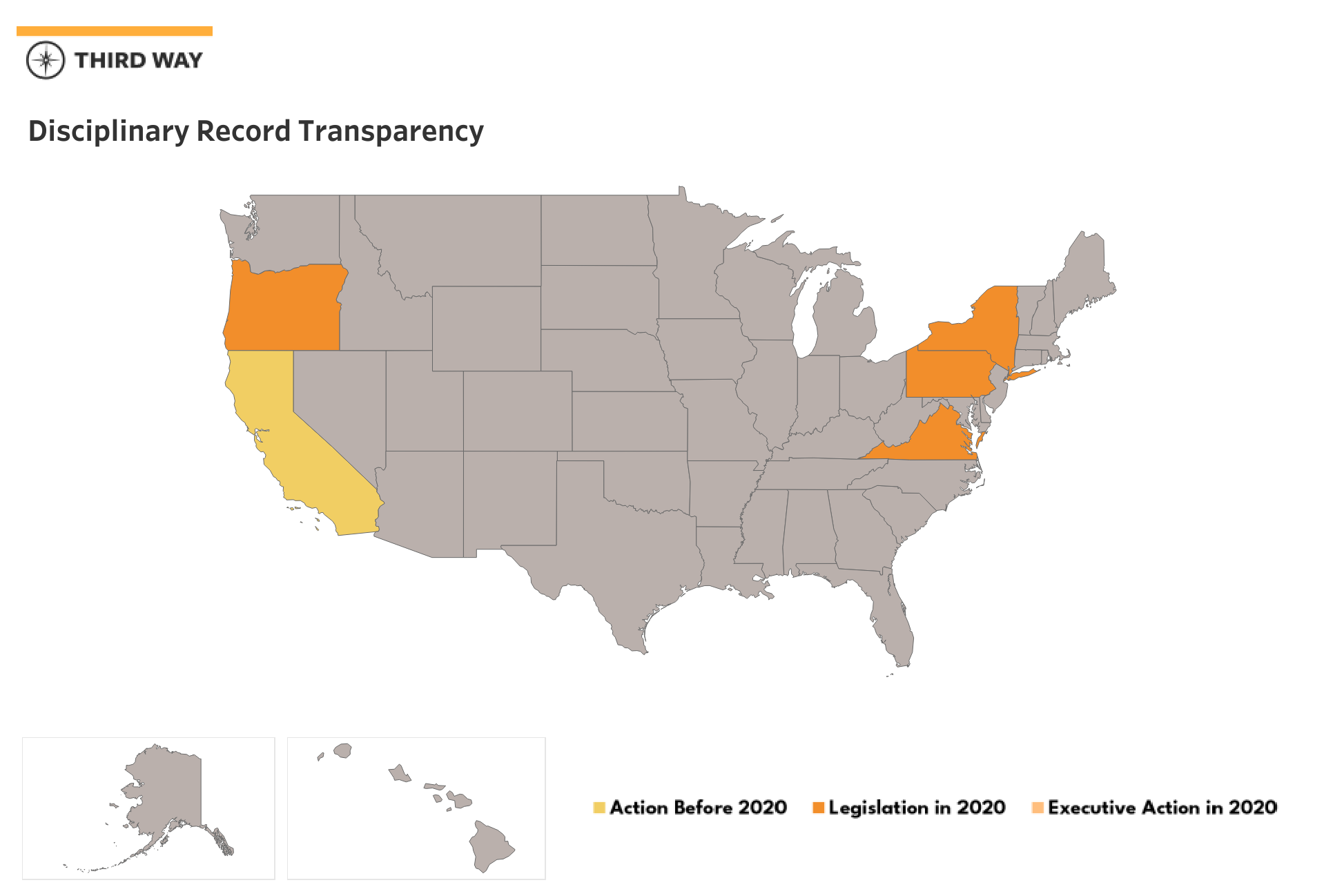 In several states, governors from both political parties used executive power to establish committees or commissions to examine policing failures and propose reforms. 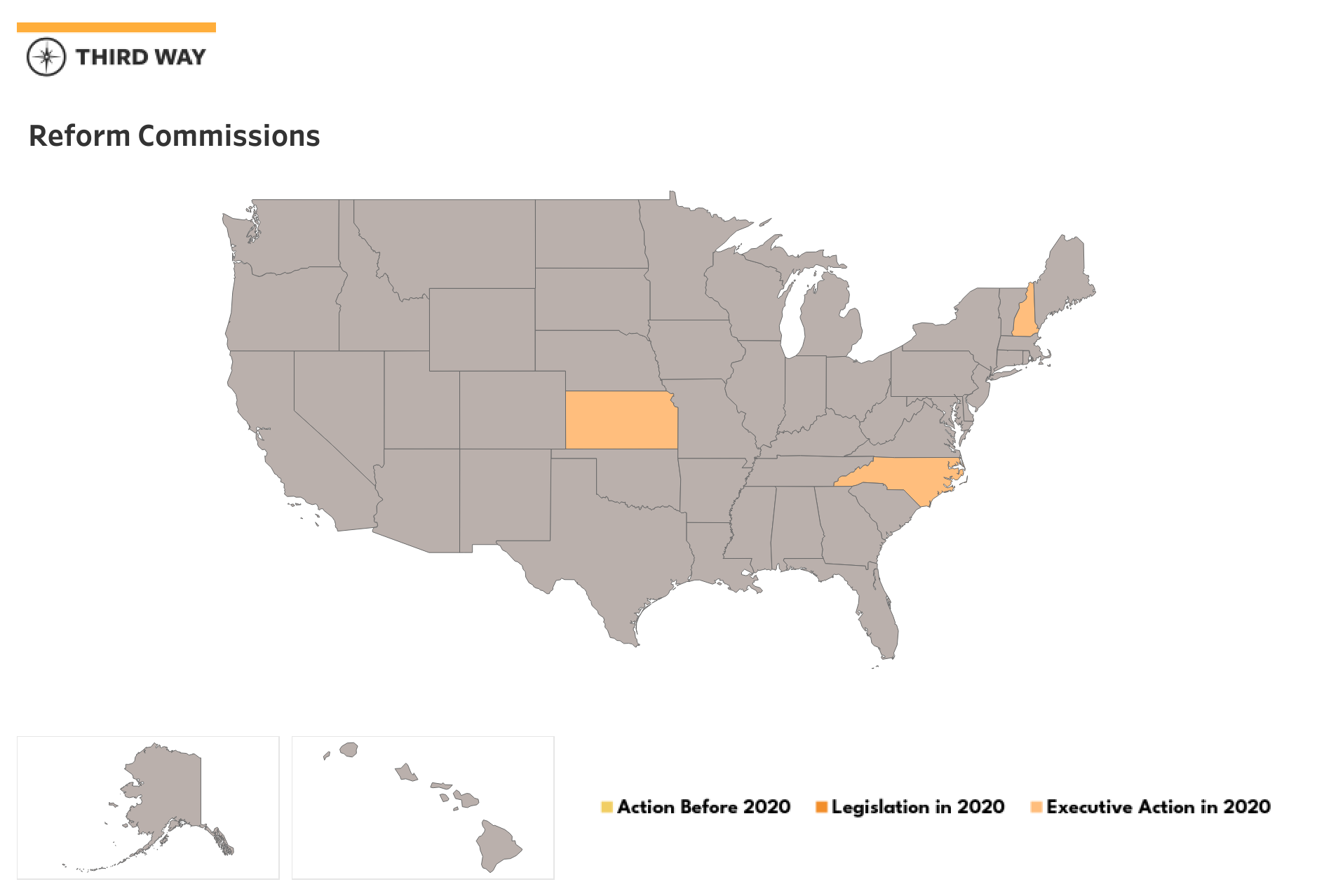 States across the country with both Republican and Democratic controlled legislatures listened to calls for change last summer and were moved to act. Sixteen states passed new legislation, including improving officer accountability, use of force, training, and requirements for officers to intervene, as well as limiting the type of military equipment police departments can acquire. The progress in each of these states shows that bold reform is viable—and Congress has no excuse not to pursue it at the federal level.