In recent years, Republicans have tagged Democrats as the party of “defund the police.” This political charge has at it roots an unfortunate choice of sloganeering and policy from a small number of progressive activists frustrated and fed up with longstanding police violence and abuse directed toward minorities. However intentioned, the defund charge proved damaging to Democrats. Republicans ran myriad attack ads in 2020 and the attack was credited with Republican upsets in swing districts that narrowed Democratic majorities in the House. This attack was so successful that during his 2022 State of the Union address, President Biden felt compelled to say, “We should all agree: The answer is not to defund the police. The answer is to fund the police. Fund them. Fund them.”1 The President also dedicated $10 billion from the American Rescue Plan for public safety, including $6.5 billion in crime-fighting aid to state and local communities.

But is the Republican charge even remotely true? It has been taken as a given by much of the media just as Democrats have been pigeon-holed as soft on crime and being responsible for rampant crime across the country. Yet as our March 2022 report showed, the 25 states that voted for Donald Trump had a murder rate 40% higher than the 25 states that voted for Joe Biden. And 8 of the 10 states with the highest murder rates not only voted for Donald Trump, they voted Republican in every presidential election this century. Is the Democrats’ defund the police portrait as inaccurate as its soft on crime portrait?

To answer this question, we compared the police budgets of the 25 largest Democrat-run cities and the 25 largest Republican-run cities.2 We pulled FY2021 and FY2022 funding data directly from city operating budgets, as well as police force data from a mixture of police department websites, city budgets, and local news sources. Using this, we calculated several key metrics—the number of police officers, police officers per capita, police funding per capita, and percent change in police budgets from FY2021 to FY2022. Per capita data allows us to control for population and compare cities like New York City and Fort Worth.

We found that despite conventional wisdom to the contrary, Democrat-run cities employ far more police officers and spend far more money on policing per capita than Republican-run cities. In fact, police forces in Dem cities are 75% larger than police forces in GOP cities. And Democrats spend about 38% more per person on policing than Republicans do. On average, Democrat- and Republican-run cities all saw an increase in police funding in 2022, with Democrats actually increasing police budgets by slightly more.

The data make clear—Republicans may talk about funding the police, but they trail badly as compared to Democrats.

The size of a city’s police force is often seen as indicative of its support for law enforcement. Democrats have been accused of defunding the police and cutting police funding and staff. We compared the 25 most populous cities run by each party as defined by the political affiliation of its mayor to see if this potent political charge is true.

We found that in the aggregate:

We also compared the median per capita police force average since larger cities like New York and Los Angeles can skew results. Among these same cities, those with Democratic mayors had a median of 195.3 officers per 100,000 residents, or 23.1% more than the 158.7 median for Republican run cities.

The size of a city didn’t seem to be a determining factor in the per capita rate of police officers. For example, Phoenix, San Antonio, and San Diego ranked 5th, 6th, and 8th in population, but ranked 34th, 4oth, and 42nd in police per capita. Meanwhile, Las Vegas, Detroit, Memphis, and Miami ranked 25th, 27th, 28th and 33rd in population, but ranked 3rd, 5th, 7th, and 9th in police per capita. Oklahoma City and Las Vegas have nearly identical populations (676,492 versus 675,592), but Republican-led Oklahoma City had a police force roughly one-third the size of Las Vegas with its Democratic mayor (162.6 officers compared to 444.1 per 100,000 residents).

Republicans have decried Democrats’ attempts to cut police budgets in liberal cities across the country. But we found that Democrats spend more on policing than Republicans do. 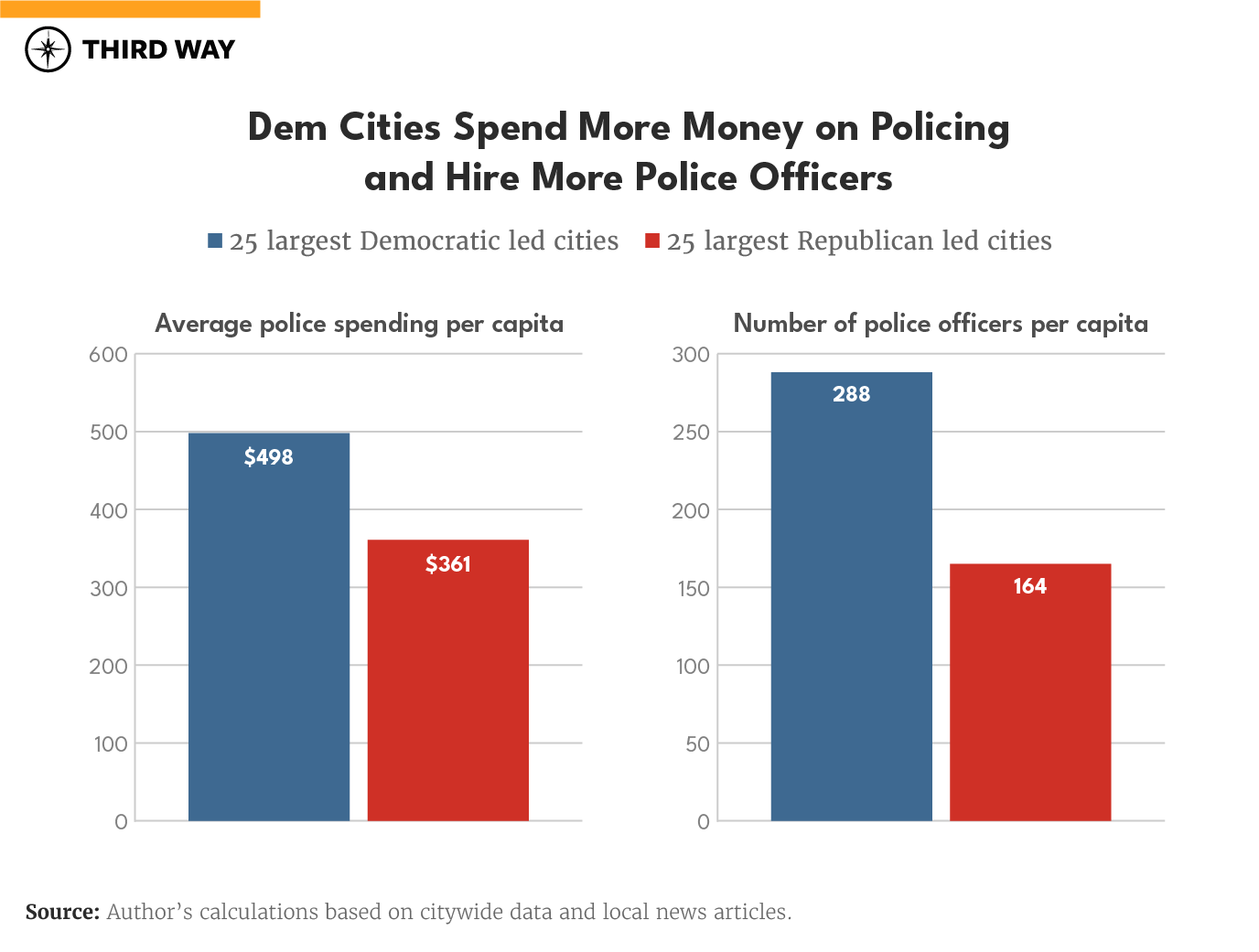 Of the ten cities that spent the most on policing per capita, six of them are Democrat-run and four are Republican-run. Cities often criticized by Republicans for being “soft-on-crime”—New York City, San Francisco, Chicago, Detroit, Seattle—are all in the top 15 on police funding per person. Republican strongholds like Bakersfield and Oklahoma City spend less than half of what New York City and Chicago spend on their police. 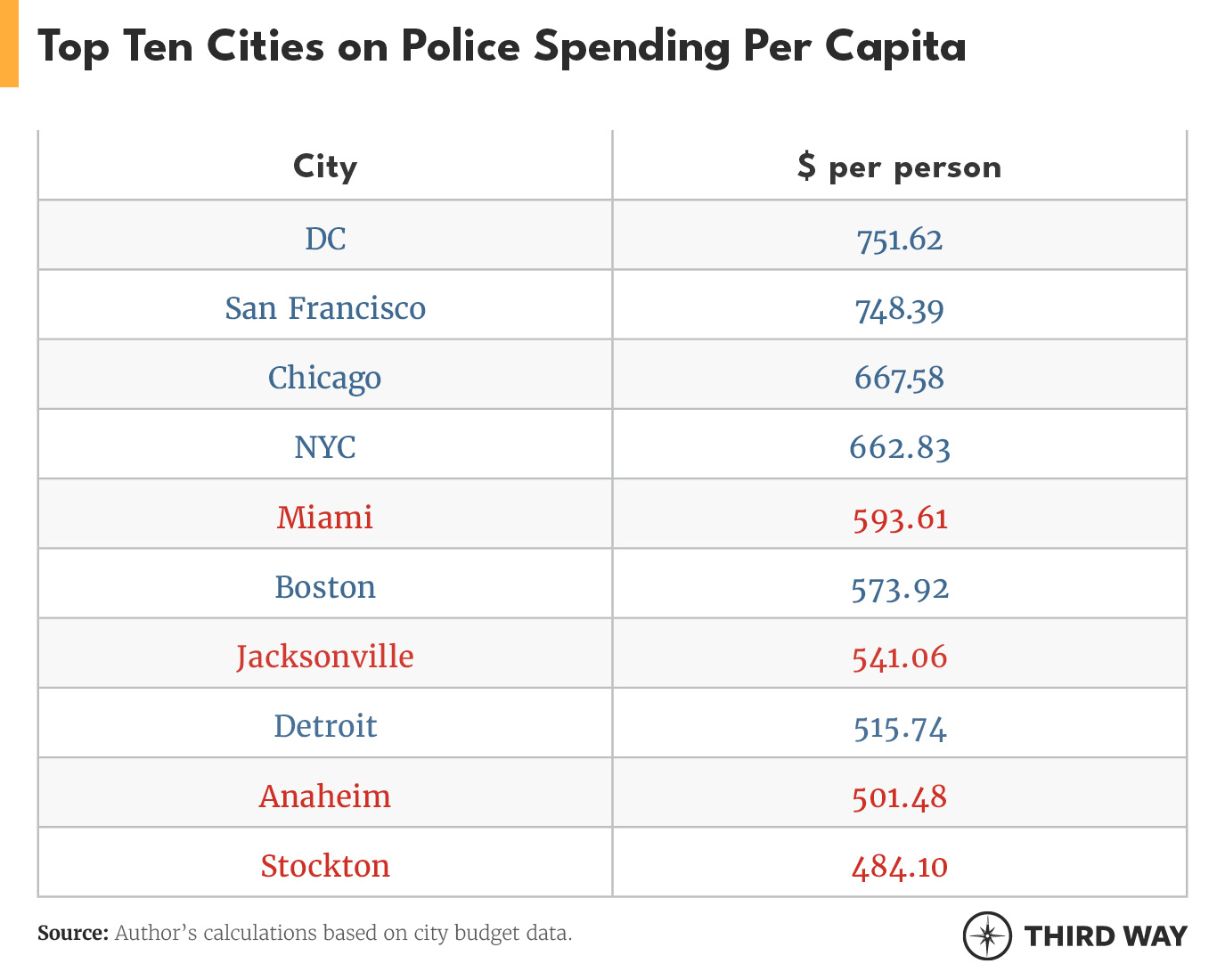 Twenty-one of 25 Democratic cities and 21 of 25 Republican cities showed budget increases in FY2022. Cities like New York and Los Angeles are often mentioned in defund the police attacks–both cities increased their police budgets in 2022. In fact, the ten largest Democrat-run cities increased their police budgets in 2022, though Philadelphia’s held fairly constant with a 0.28% increase. New York City’s increase of 3.75% added $196 million. Chicago, Portland, and Seattle—cities often accused of defunding the police—all saw increases in their 2022 police budgets. Paradoxically, Washington DC had the largest budget cut of 3.98%, but also the largest police budget per resident at $751.62. 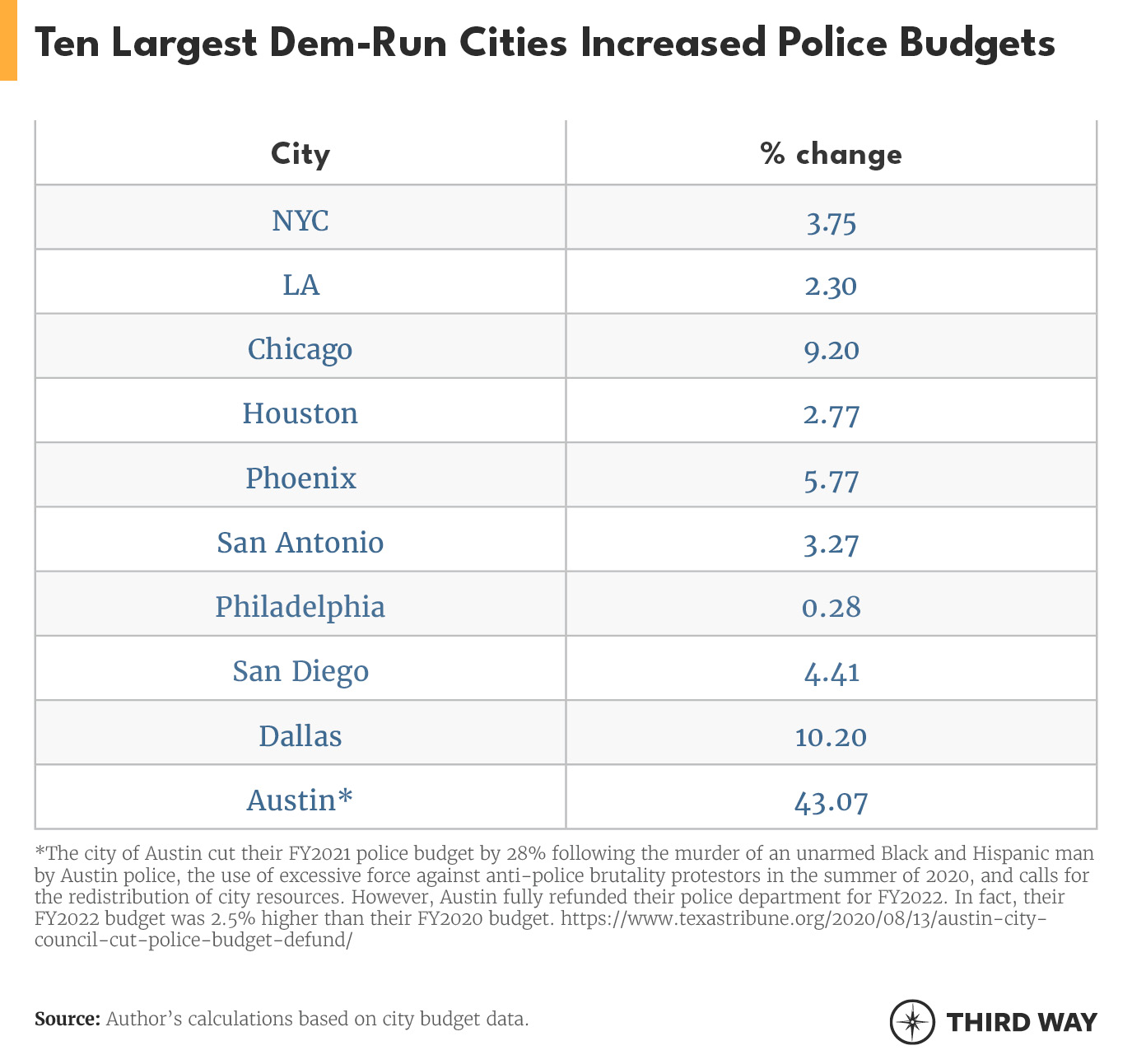 In this report, we find that police funding and police personnel levels are far higher in the 25 largest Democrat-run cities compared to the 25 largest Republican-run cities. In the most recent funding cycle, these same Democratic cities increased their police budgets to a greater degree than cities with Republican mayors.

Our conclusion is that the defund the police charge against Democrats may be politically damaging, but it is factually inaccurate. If anything, Republican mayors have a defund problem.