Why the Gainful Employment Rule is a Political Winner

When students start college, they expect their program to prepare them to graduate and get a good job earning enough to pay down their student loan debt. But that doesn’t always pan out—in fact, at least 1,700 career education programs left their graduates earning less than the federal poverty line as recently as 2017.1 Fortunately, the US Department of Education (Department) is rewriting the Gainful Employment (GE) rule, a federal regulation that will hold career programs accountable for graduates’ debt and earnings outcomes and protect students from programs that are likely to leave them worse off than before they enrolled. The new GE regulations are set to drop in spring 2023, and they offer an opportunity to inject much-needed outcomes-based accountability into our higher ed system.2

The original GE rule, finalized in 2014 but rescinded by the Trump Administration in 2019, measured whether career programs left graduates with a yearly income that would allow them to reasonably pay down their student loans after completing the degree. A school was marked as either passing or failing the rule using a debt-to-earnings metric that compared graduates’ average loan payment to their mean or median earnings (whichever was higher). Failing programs would lose access to Title IV federal financial aid dollars—protecting students from programs that weren’t serving them well. This consumer protection guardrail was lauded by advocates and student organizations, but since it was rescinded before it fully went into effect, the public paid little attention to the policy change.

Now that GE is back on the table, we wanted to see how voters might react to a new rule. We worked with Global Strategy Group to ask 1,000 likely voters nationwide, as well as 200 higher education institution leaders, about their views on the subject. The results were clear: more than three-quarters of voters and similar rates of institution leaders support the rule. There’s also intense support among voters for connecting higher education to positive student outcomes, especially related to job prospects (91% support) and loan repayment (90% support), as well as a clear acknowledgment that the federal government needs to do more to protect students from predatory programs (91% support). Institution leaders also see the benefits of connecting higher ed to the job market (97% support), ensuring that graduates can earn enough to repay their student loans (90% support), and protecting students from programs that could leave them worse off than when they enrolled (92% support). 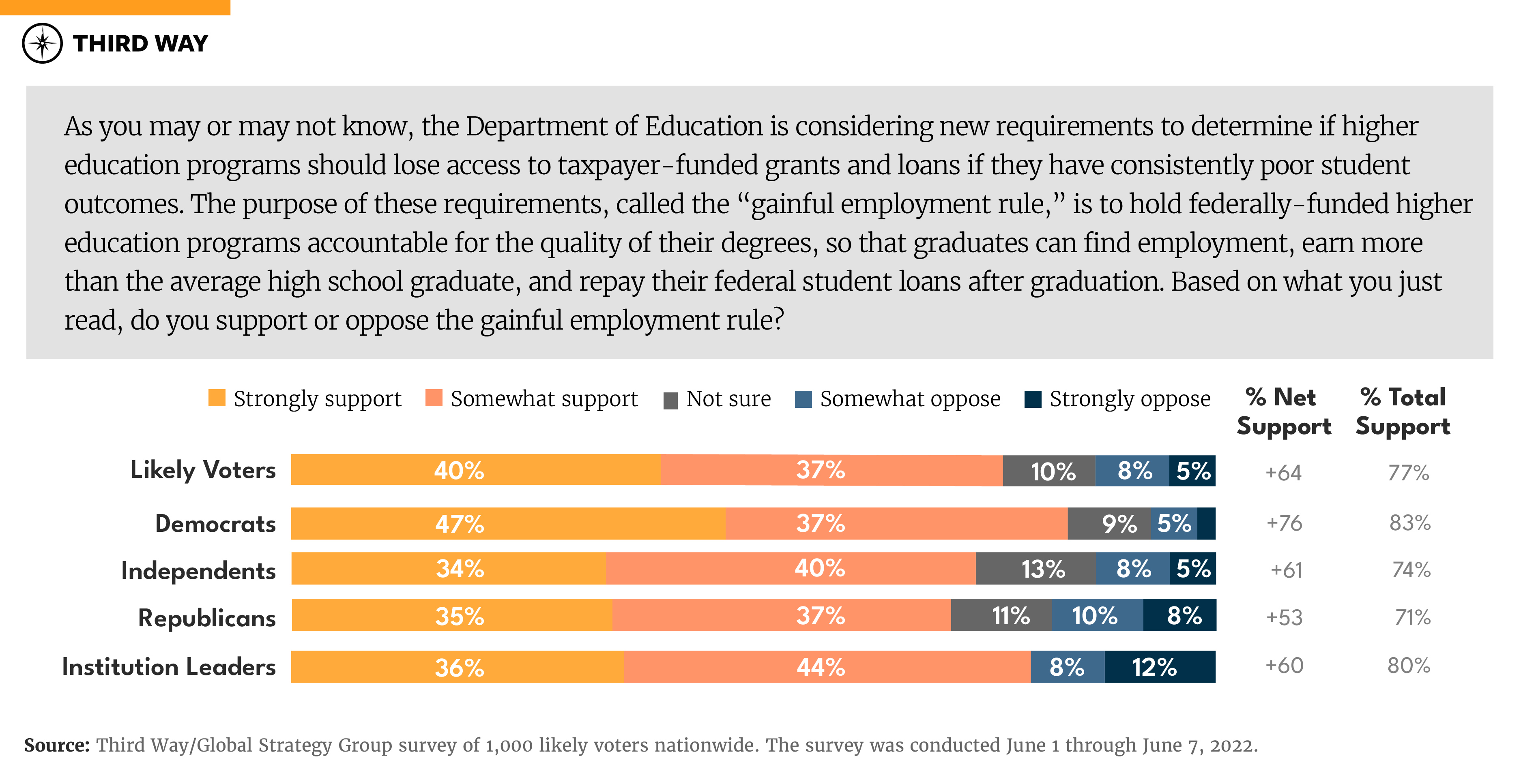 And it turns out that the more respondents heard about GE, the more they liked it. When asked about the debt-to-earnings metric from the original rule, 73% of voters supported it after seeing a longer, more detailed explanation (up 11 points compared to the shorter description). The devil is often in the details when it comes to federal policy, and it is clear that further reflection on this topic only increases its popularity with voters. 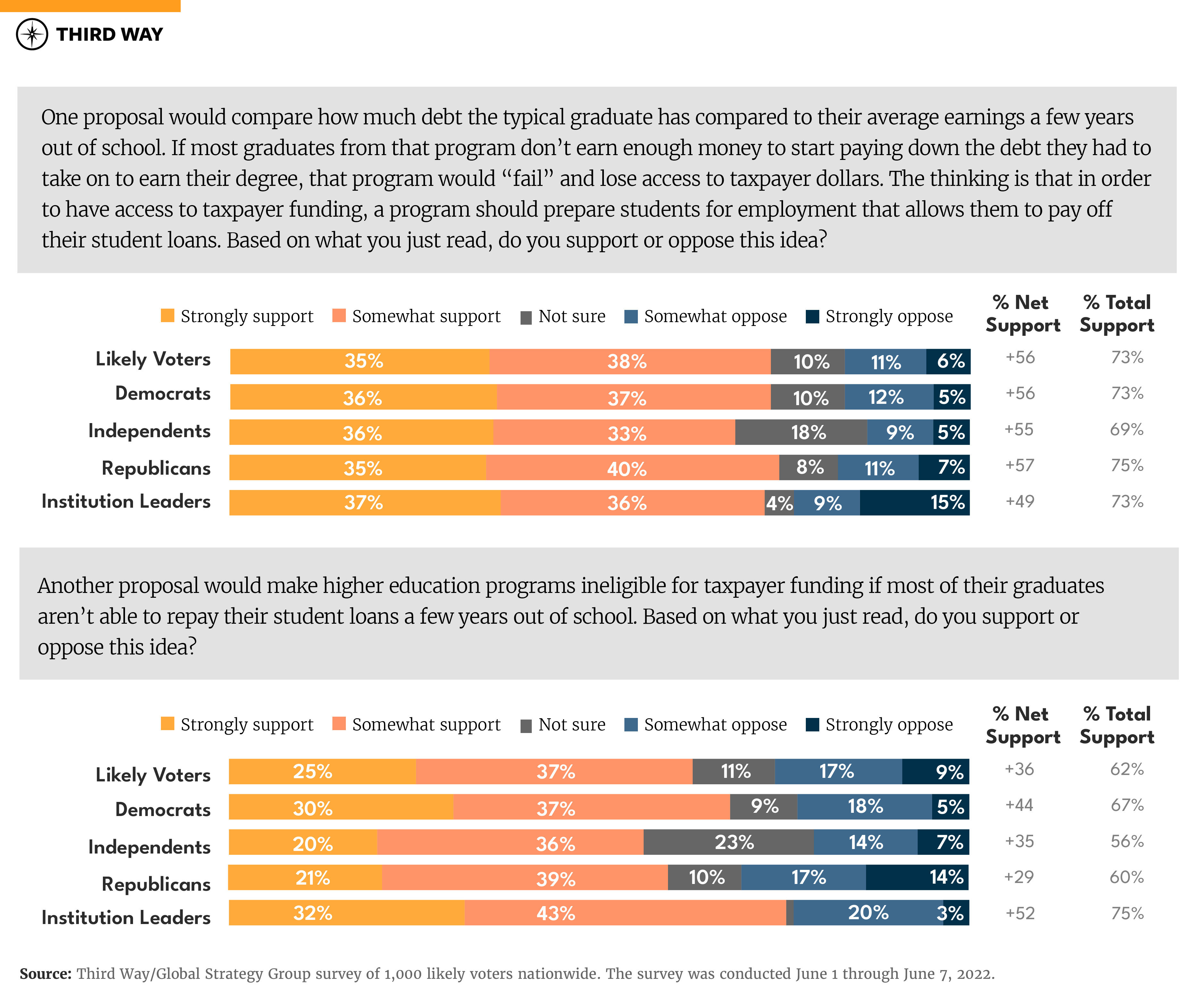 A new potential GE rule has been robustly debated, in part because it is expected to add a new metric—an earnings threshold—to the oversight of career education programs in addition to the Obama-era debt-to-earnings measure that the Trump administration shelved. That means if a career program leaves its graduates making less on average than a certain threshold (for example, the average salary of a high school graduate in that state), it could fail the new rule, no matter how much debt its graduates are saddled with. This idea received even more widespread support from the public: 89% of voters and 90% of institution leaders agreed in general that higher education programs receiving federal funds should leave graduates able to get jobs that earn more than the average high school graduate. And 60% of voters and 76% of institution leaders identified that principle as important when deciding which career programs should have access to federal student loans. Again, hearing more about the details increased support for an earnings threshold, with a longer explanation boosting support for such a rule by 6 points (64% with a short description and 70% with a longer one). While voters may not be familiar with GE to start, the more they hear, the more they like. 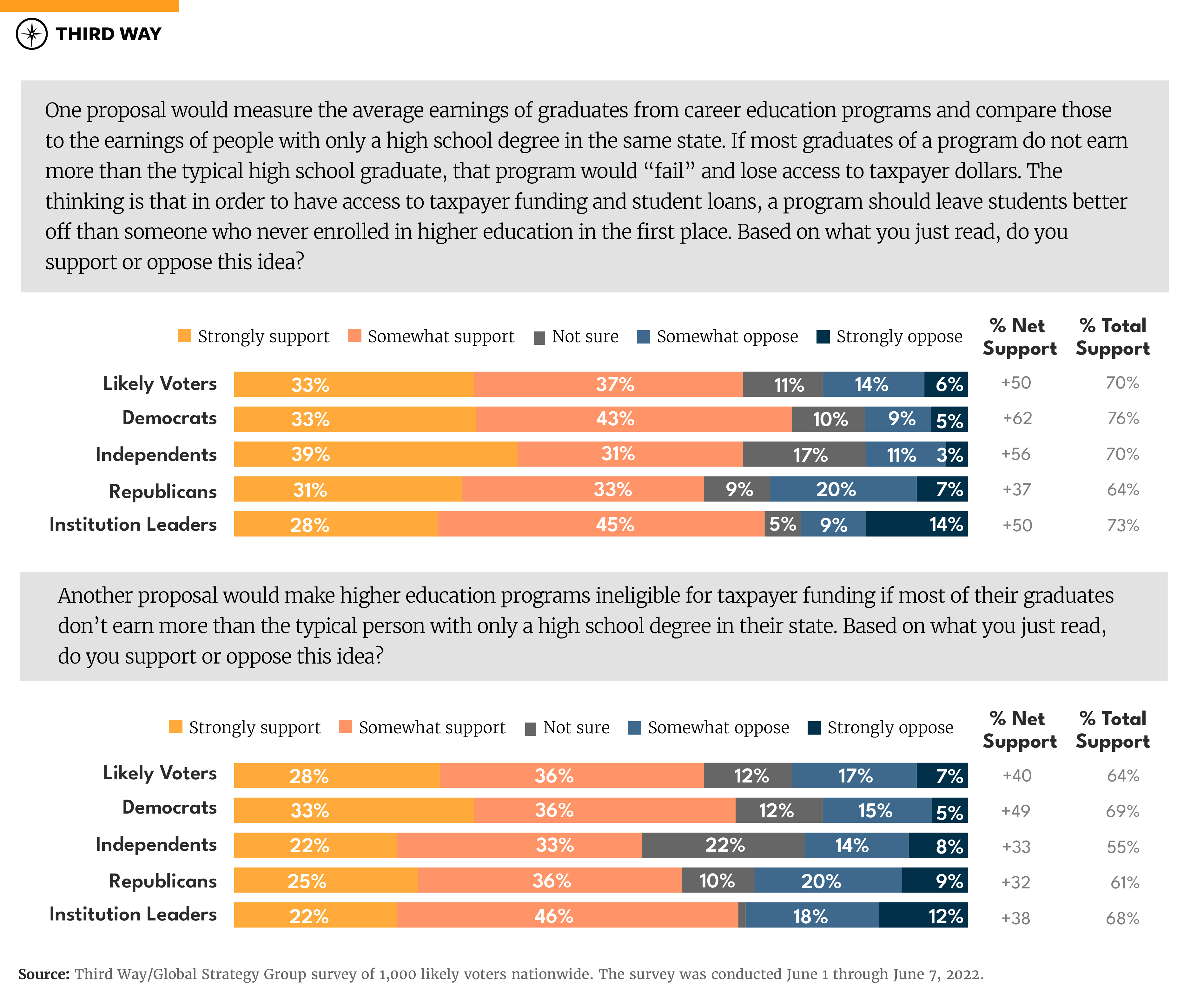 GE’s popularity continued to hold up when voters were asked about their top higher ed policy priorities. Notably, 60% of voters stated that requiring higher education programs to show a track record of graduates getting good jobs before they can receive taxpayer dollars was an important priority, compared to only 43% who said the same about cancelling student loan debt and 51% wanting policymakers to prioritize making higher education free. The numbers are clear: voters support the principles behind the Gainful Employment rule, they like the rule even more when they hear the details, and they believe implementing this guardrail should be a top priority for policymakers. 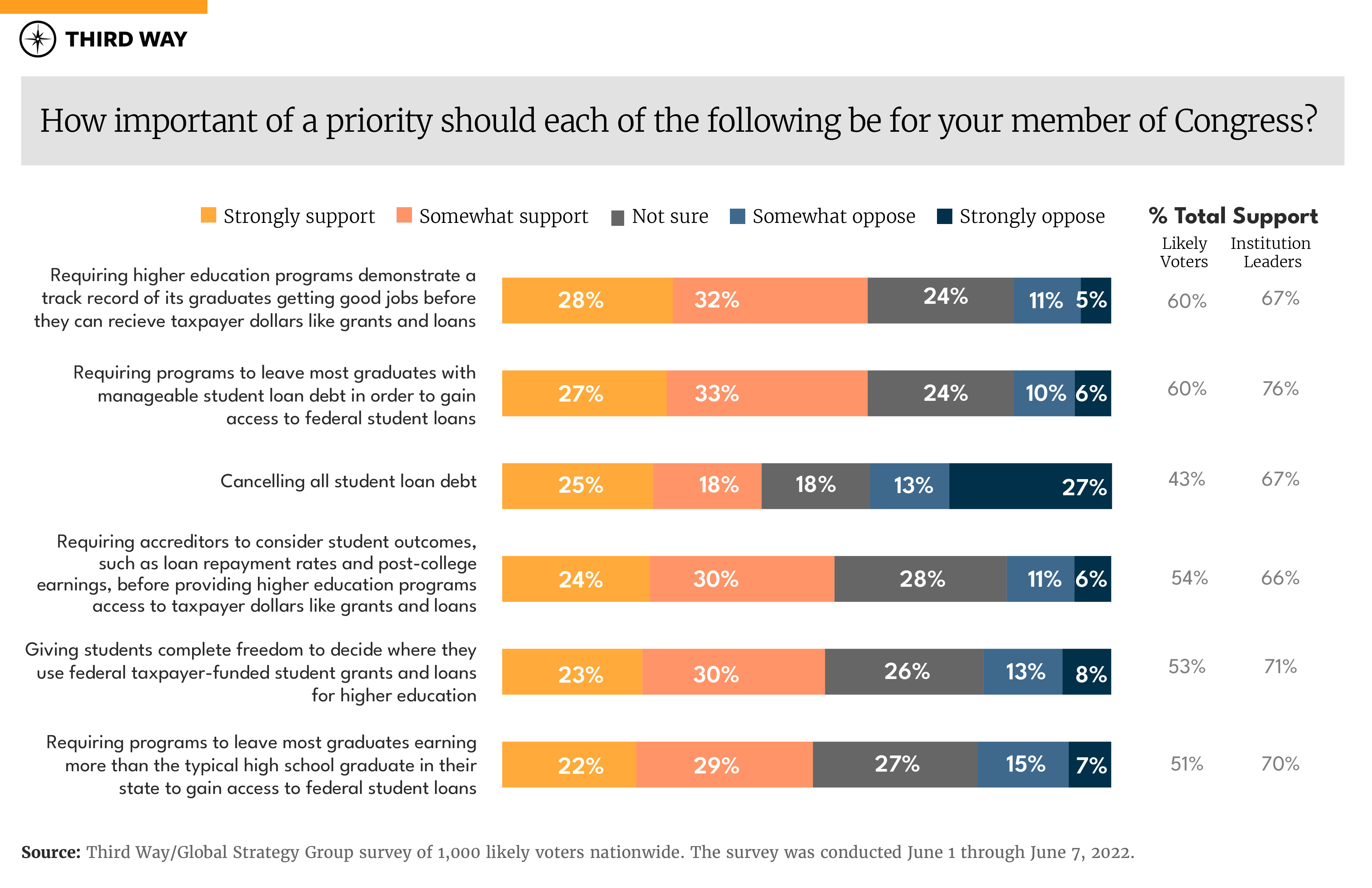 In sum, there is broad public support for both reinstating the debt-to-earnings metric and adding a new earnings threshold. And more voters want policymakers to prioritize implementing guardrails like GE than want the same about debt cancellation or free college. Voters are calling for greater accountability in higher ed, and a strong GE rule would advance that goal by ensuring taxpayer dollars are not flowing to programs that leave most students worse off than if they had never enrolled. Reinstating this guardrail and strengthening it with an earnings threshold will demonstrate to voters that policymakers are doing what they can to ensure students are prepared for success post-college.

Global Strategy Group conducted an online survey of 1,000 likely voters nationwide with oversamples of 200 Hispanic likely voters, 200 African American likely voters, and 200 institution leaders. The survey was conducted June 1 through June 7, 2022. The precision of online surveys is measured using a credibility interval and, in this case, the interval at the 95% confidence level is ±3.1%. The margin of error on sub-samples is greater.