As Republicans take control of the US House of Representatives and Democrats hold onto a slim Senate majority, this Congress will necessitate a serious dose of bipartisanship if policymakers hope to make progress on any major priority. On some issues, that meeting of the minds may be near impossible, but on higher education reform, there is much common ground to explore. To better understand the views of Republicans around higher education and the reform proposals championed by advocates of increased accountability for student outcomes, we partnered with Global Strategy Group to dive deep on these topics with 1,400 registered Republican voters nationwide.

Overall, Republican registered voters were supportive of both additional oversight and federal intervention in higher education outcomes. In fact, 85% of Republican voters think that reforms of our higher education system are needed, and 70% agree that the federal government can do more to help college students succeed.1 Even though Republicans push back against government action in other areas, they do see the need for a greater federal role in higher education. But what do they want that role to look like? And what policies do they want to see prioritized in the process? The data shows three big takeaways that should guide policymakers as they seek to find consensus over the next two years.

Republican Voters Want to Stop Taxpayer Dollars from Going to Schools that Provide No Return on Investment.

As college costs continue to rise, students and taxpayers alike have increasingly focused on whether a higher education institution or program is providing a real return on investment (ROI). This concept has been promoted by researchers and think tanks on both sides of the aisle, and while there’s not a one-size-fits all approach to evaluating a school or program’s value, there’s a clear appetite for ROI to be a larger part of the federal policy conversation.2 Republican voters echoed this sentiment, with 88% agreeing that higher education programs should be required to provide a good ROI if they are going to accept taxpayer dollars. Similarly, 71% of Republican voters said that the federal government should prioritize saving taxpayer dollars by ensuring that federal financial aid doesn’t go to schools that mislead students. Across the board, these voters feel there should be some basic guardrails and expectations that federally funded higher education programs actually deliver for their students. 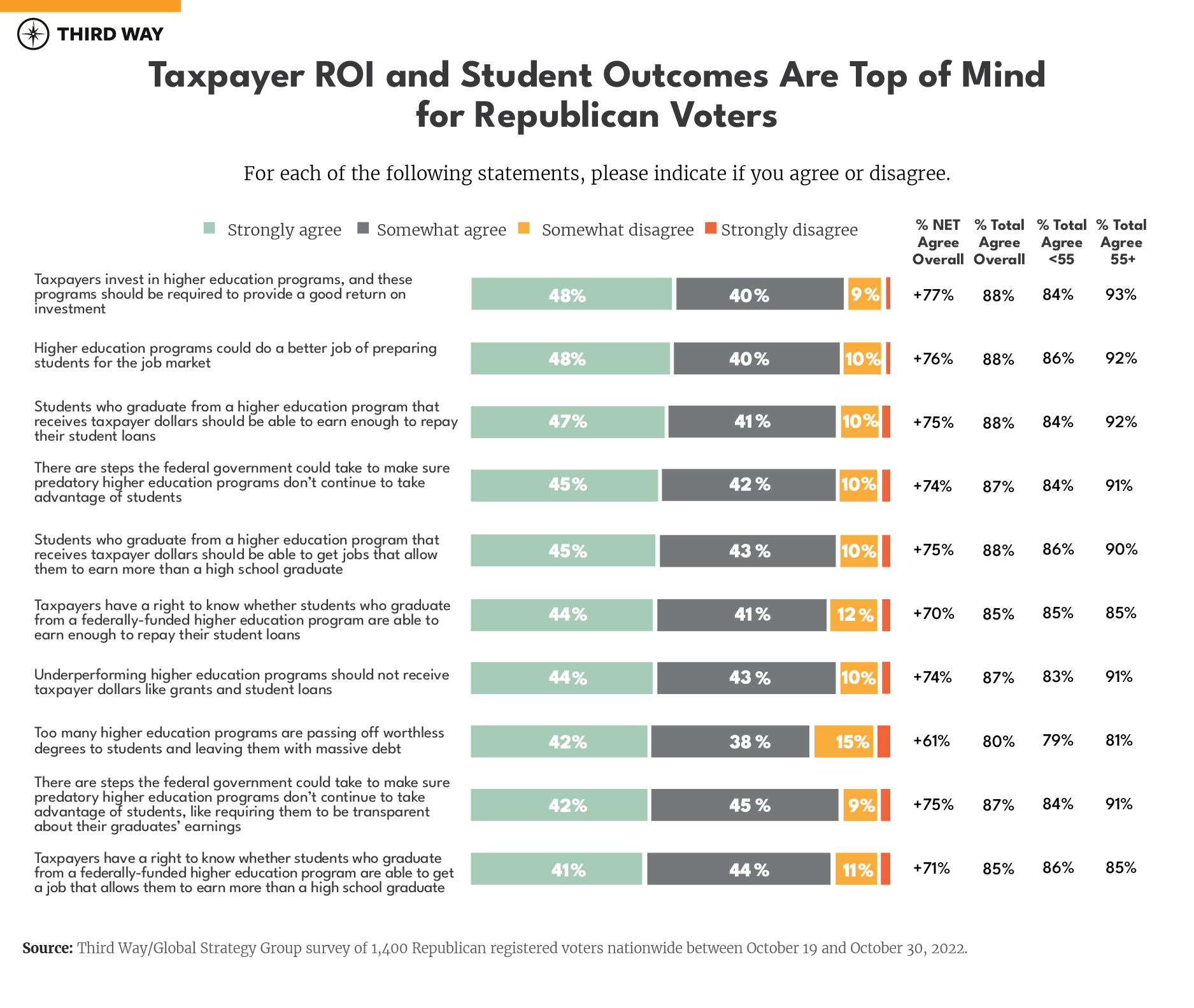 When asked if the federal government should have a role in how higher education is funded, 68% of Republican voters agreed that students should only be allowed to use taxpayer-funded grants and loans at higher education programs that meet basic standards of quality. And when asked about their desired priorities for action by policymakers, the largest share of Republican voters (74%) wanted to see their member of Congress take away taxpayer funding from predatory schools that don’t disclose student outcomes. Republican voters are clear on this point, regardless of how the question is worded: taxpayers should no longer subsidize schools that don’t deliver value to students. 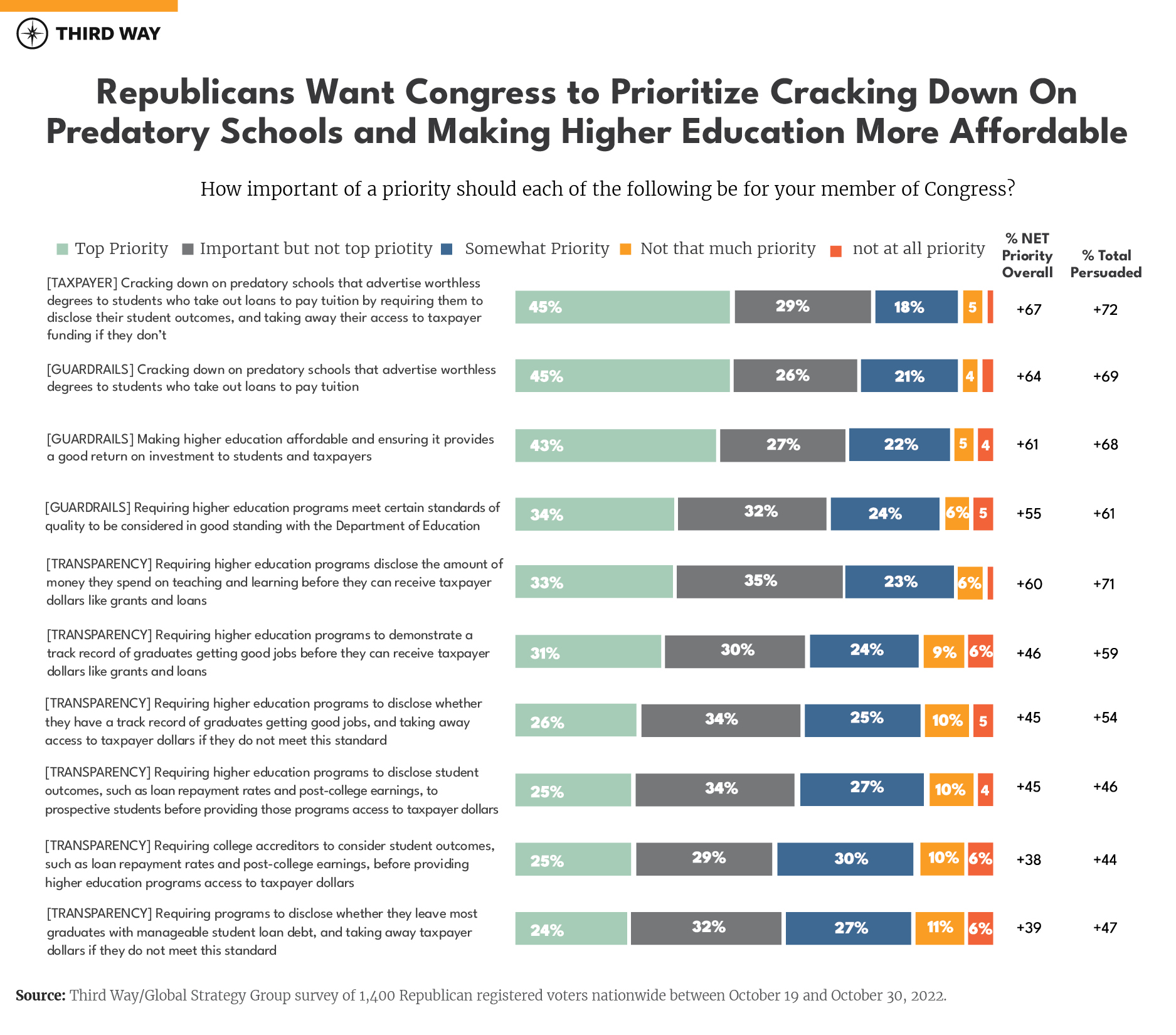 When digging into the details, Republican voters are most open to federal intervention when higher education programs lie to (60%) or mislead (52%) students. And 68% of Republicans agree that the federal government should provide basic guardrails to ensure students aren’t using taxpayer-funded grants or loans to attend predatory schools that will leave them worse off than if they’d never enrolled.

There has been a bipartisan push over the last decade to increase transparency around student outcomes, to ensure that students and taxpayers have access to the information they need about how colleges and universities are truly serving students. Republican voters concur with this push, with 85% agreeing that more transparency is needed to understand how graduates fare in the job market and the same proportion saying that higher education programs should disclose those outcomes if they want to receive taxpayer funding. 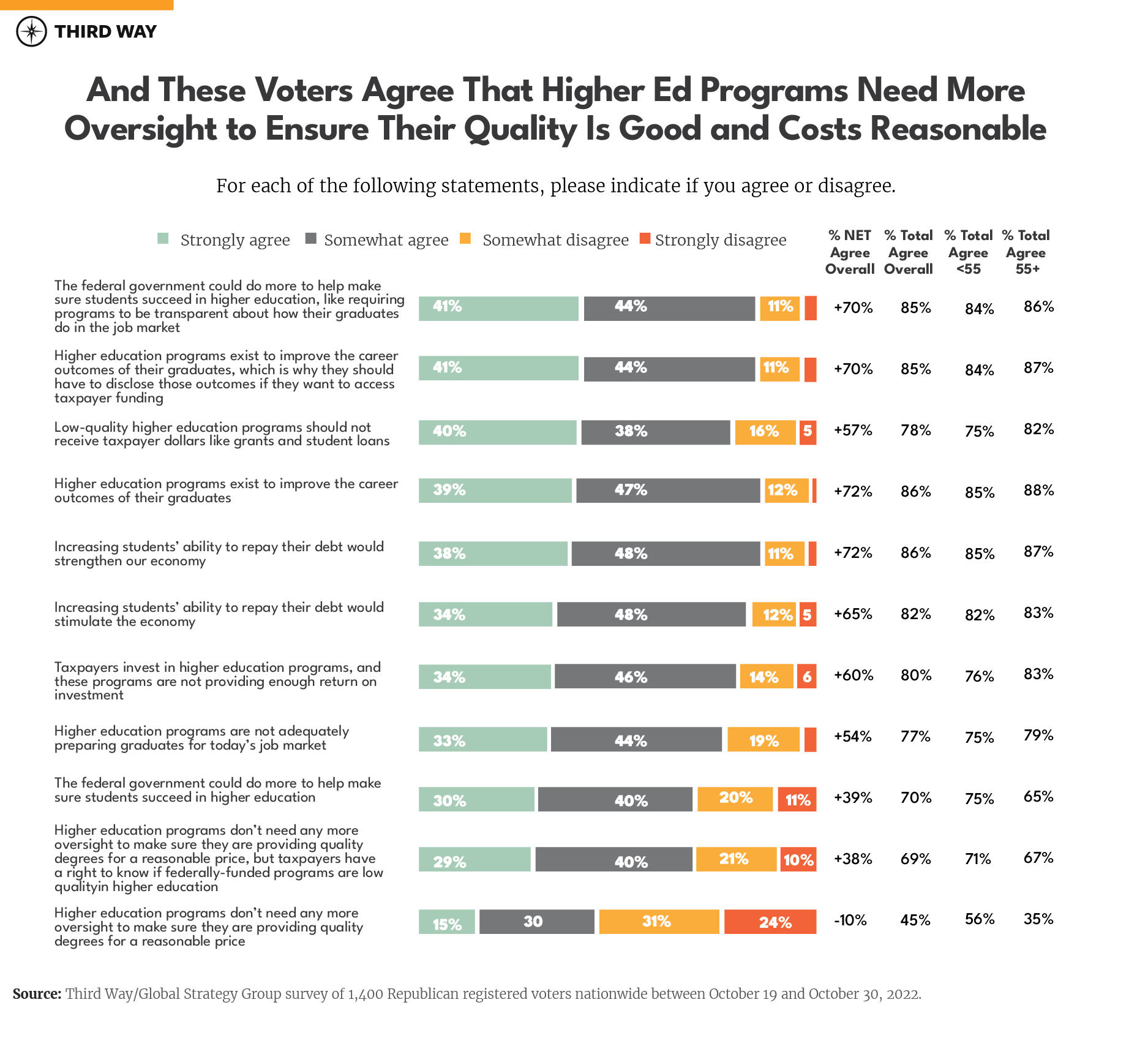 Increased transparency about program quality can help show taxpayers if the schools they’re subsidizing are good fiscal stewards. And this fiscal responsibility is key to Republicans, who say they want these programs to provide more information on tuition costs, spending on instruction, and outcomes of their graduates. In fact, nearly 8 in 10 Republican voters believe that institutions that don’t spend a sufficient proportion of their funding on instructing students should lose access to taxpayer dollars. Asked another way, 81% agree that institutions receiving federal funds should be required to spend at least one-third of the revenue they take in from student tuition and fees on teaching and learning. And 76% of Republican voters want to see 40% or more of tuition and fee revenue spent on instruction if a school is going to get taxpayer funding. This idea of measuring instructional spending resonated with Republican voters as an intuitive accountability check—offering a potential avenue for bipartisan policy discussions in the 118th Congress. 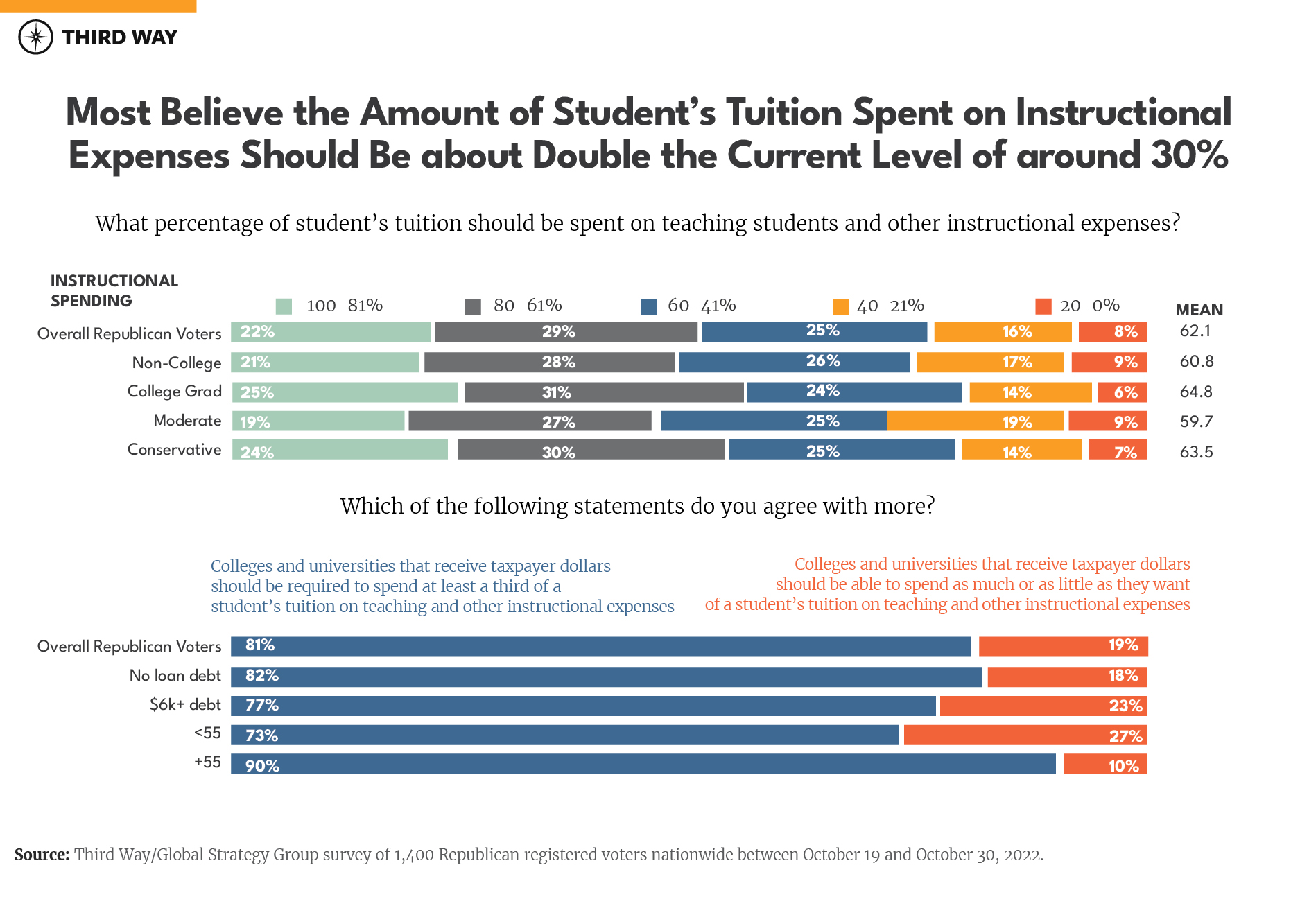 Heading into a split-control Congress, there may be more opportunities for bipartisanship on higher education reform than on many other pressing issues facing the country. Republican voters are clear that they want to save taxpayer dollars from going to scam schools, are willing to accept federal intervention to protect both taxpayers and students, and desire increased transparency around how schools are performing so that consumers have the information they need to make smart decisions about where to invest their time and money in higher education. Policymakers should capitalize on this opportunity for bipartisan agreement in the next Congress to establish basic guardrails of quality for taxpayer-funded college programs.

Global Strategy Group conducted an online survey of 1,400 Republican registered voters nationwide. The survey was conducted October 19 through October 30, 2022. The precision of online surveys is measured using a credibility interval and, in this case, the interval at the 95% confidence level is ±2.6%.