What Will Happen If We Reinstate the Gainful Employment Rule?

In January, the US Department of Education (Department) began a negotiated rulemaking process to determine which career education programs—certifications or degrees like those that prepare students to become auto mechanics, elevator technicians, or medical assistants—are worthy of federal funding due to their ability to provide “gainful employment” opportunities to those who attend. Designed to ensure that taxpayer-funded career education programs leave graduates earning a high enough income to reasonably pay down the debt they must accrue to attend, the Gainful Employment (GE) rule was finalized in 2014, and the first results on program performance were released in 2017. Unfortunately, the rule was rescinded by the Trump Administration in 2019 before it was ever fully implemented and enforced.

The 2017 data that was released before the DeVos Department scrapped the rule showed that about 750 college programs left graduates earning too little and owing too much; many even resulted in poverty-level wages. Now, as the Department continues to debate reinstating the next iteration of the GE rule, it’s worth asking the question: what if the rules were enforced today in the same manner as they were intended in 2014? Which types of programs would fail the GE test now, and which would pass?

To get a glimpse of this potential impact, we ran an analysis of the Department’s new program-level data. The results give us an indication of how different program types may fare today if subjected to the rule finalized eight years ago.

What Was the 2014 Gainful Employment Rule?

The 2014 GE rule aimed to measure whether programs were leaving their graduates with enough of an annual income to reasonably begin paying down their educational debt shortly after they completed their credential.1 Two metrics were used to determine whether a program passed or failed:

A college program had to fail both the debt-to-earnings and discretionary income ratio to receive a failing status.

The Results: Gainful Employment Then vs. Now

To estimate GE outcomes with current data, we used the Department’s recently released outcomes data for programs that are currently covered under the “gainful employment” requirement in statute. These include all programs at for-profit institutions, as well as all certificate programs at public and private non-profit institutions that have debt and earnings information available.

There are some differences between the older GE data and the newer data made available by the Department that we analyzed.2 The current program-level data groups similar program outcomes under a larger reporting umbrella and, as a result, fewer data points are available. For example, the 2014 GE rule data included outcomes for 8,637 college programs, while our sample of current programs covered by GE has outcomes for only 4,932 programs.3

But the results can still show us how many programs may be impacted by a similar GE rule today in comparison to the past, and whether those programs differ depending on which educational sector offers them. 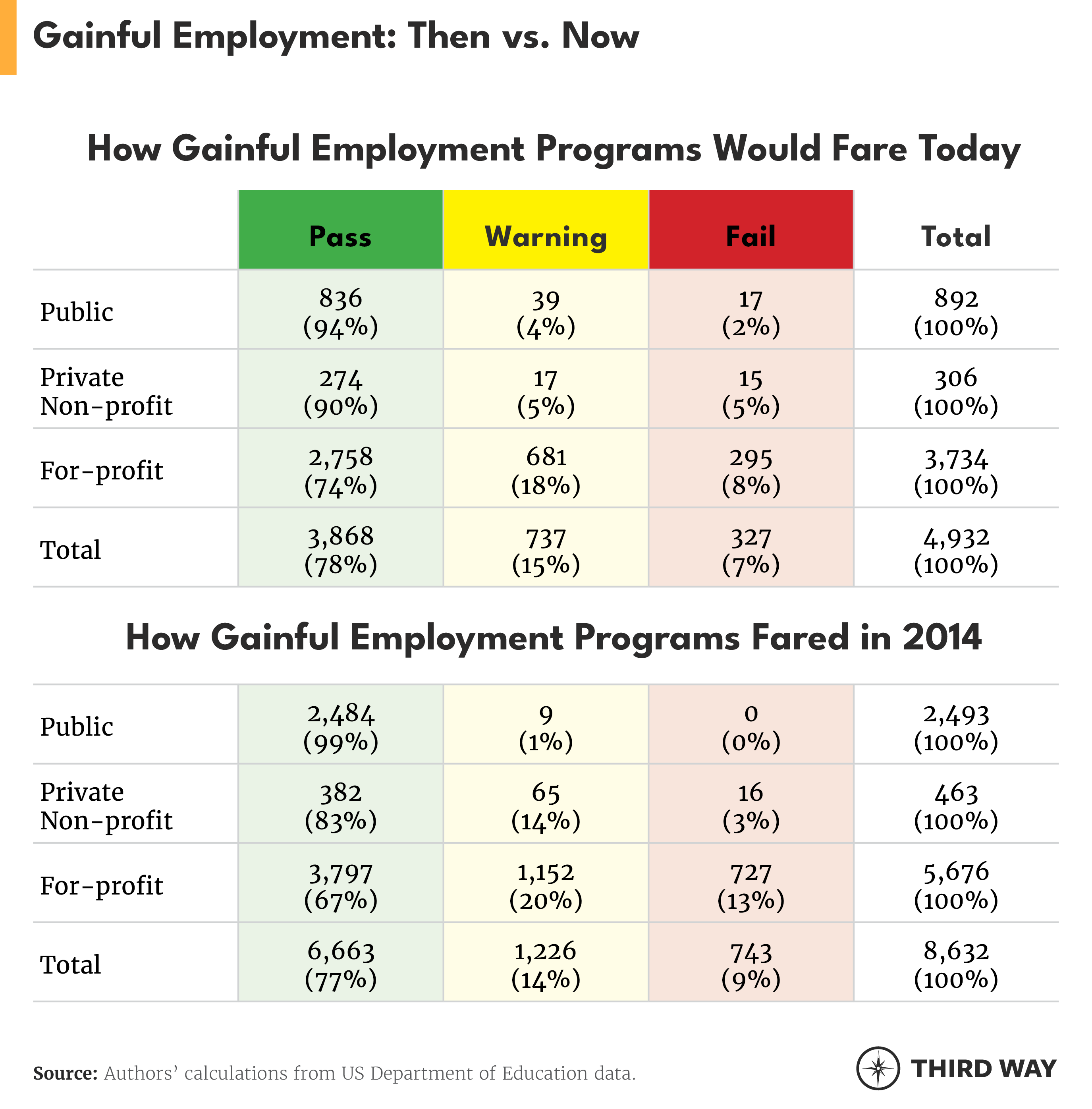 Overall, we see an incredibly similar proportion of programs falling into the “pass,” “warning,” and “failing” GE designations today as under the 2014 rule, though there is some variation in the results by sector.

At public institutions, which had no failing programs under the 2014 rule, there is a slight increase in those falling into the “warning” category (from 1% to 4%) and into the “failing” category (from 0% to 2%). Notably, private non-profit programs show an increase in those passing the rule, going from 83% under the 2014 rule to 90% using the updated data from the Department. The proportion of failing for-profit programs appears to have improved the most when assessing current program-level data. While 13% of all for-profit programs failed the GE test under the 2014 rule, this proportion shrinks to 8% when analyzing the earnings and debt of graduates using newer data. We know that some failing programs shut their doors after the original GE data was released; it’s unclear how much of these gains are explained by those closures or whether the outcomes of these programs have improved over time (or both).

The Department will continue to convene and negotiate whether the version of the GE rule finalized in 2014 is adequate to protect students and taxpayers today, with the next session being held from February 14-18, 2022. Our analysis shows that a similar proportion of programs will likely fail the rule today if it is enacted similarly to the past. But programs’ ability to pass or fail the rule could change if the Department and negotiators consider including additional measures of quality in the new rule. Given that the final rule will need to be able to stand up to legal challenges and the 2014 rule has already proven its mettle in court, it should be considered as at least a baseline of educational quality moving forward.