The Story 48 Hours Ago

Oil became a liability on April 20. It was the first time in history oil prices went negative.

Now YOU pay me for the luxury of taking that barrel of oil from YOU.

You just want to be rid of it. You must physically settle a contract you signed to deliver that barrel of oil today. You must back that tanker truck up to a storage vat in Cushing, Oklahoma today. You must deliver that barrel of oil today. That’s what the contract specified. You signed that contract. There is no getting around the delivery. When you arrived at Cushing, Oklahoma, there were no buyers for that barrel of oil. None. Storage was limited and running out. What do you do? You pay someone to take that oil, that physical barrel of oil, from your tanker truck. Over the course of yesterday, that price you, the owner of the oil, had to pay a “buyer” rose to nearly $38.

The emergence of negative oil prices is a result of the drastic collapse in energy demand as the global economy shutdown due to COVID-19. Some experts believe that oil demand has fallen by 30 million barrels a day (MMBD). Global oil demand was running at 100 MMBD prior to the health crisis. Such a sustained drop in oil demand would mean that the price of oil would be depressed for a while. The dynamics are changing price quotes each hour. Just over the course of several hours yesterday, oil prices for June 2020 delivery collapsed from well over $20 per barrel to just $8. At mid-day today, that same contract is trading at over $14. The oil contract for a barrel delivered in September 2020 is just over $26. Even If that turns out to be good forecast of oil prices in September, a recent survey conducted by the Federal Reserve Bank of Dallas showed that oil fracking firms would not be able to cover their operating expenses. Some analysts project that at $20 oil prices for an extended period of time, over 500 oil-related companies would file for bankruptcy. The oil sector has been wracked with a history of booms and busts that have plagued states like Texas and oil workers long before the pandemic.

What Does this Mean for Clean Energy?

A persistent cheap oil economy – well into a consumer recovery – would have some bad consequences for clean energy.

We know that when things get cheap, consumers tend to buy more of it. For example, if gasoline prices at the pump fall to below $1 per gallon – and they could – will consumers want to drive more? Will they want to own more gas guzzlers?

In normal circumstances, that might be the reaction. However, these are not normal times. The very reason oil went negative is that consumers shut down their purchase channels due to physical restrictions. Right now, a protracted economic downturn will really cause consumers to pull back their spending appetites, especially for large durable goods and certainly vehicles. On April 17, the University of Michigan’s preliminary April consumer survey showed a 42% plunge in consumers’ appetite to buy durable goods (see chart below). This compares to a 17% drop during the period in 2008 when the economy really started to unravel after the Lehman Brothers bank failure. 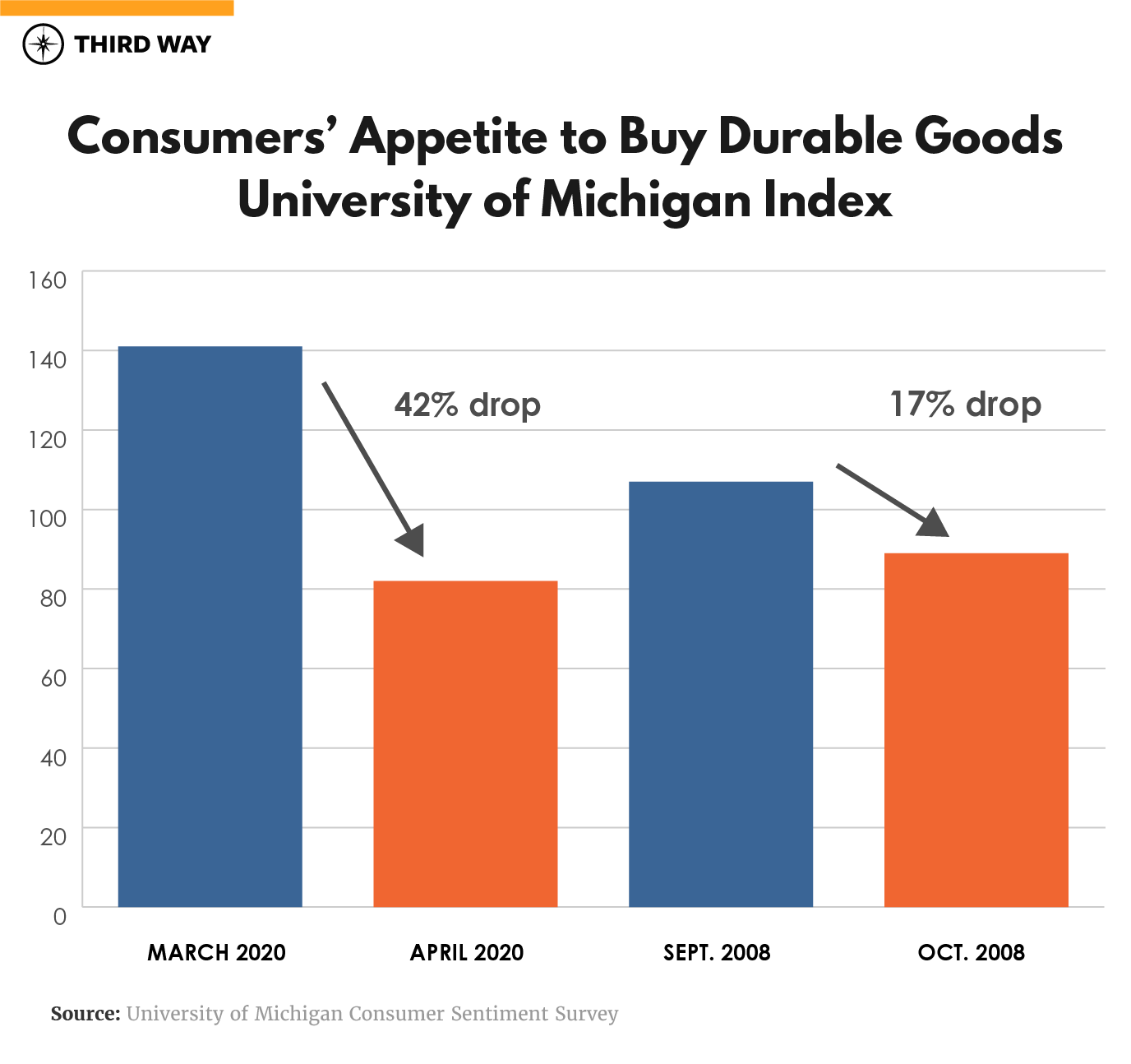 Even if low gasoline prices persisted into a consumer recovery, then yes, such reactions could be expected: consumers driving more and buying a gas guzzler. Our bet is that day will not come.

Consumers are voting with their feet and with their investments. First, the foot traffic. Our focus should be on the 80 million millennials in the US, since they will be the generation powering the recovery that lies ahead. They want to be in livable towns and cities with amenities within walking distance. They are looking for clean energy alternatives to mobility. A Consumer Reports survey last year showed that 72% of those surveyed want to see more electric cars, that increased EV use will reduce pollution and also reduce oil use.

It is evident that clean energy is not going to retrench over the long run. The ever-cheaper cost of wind, solar, and short-duration energy storage, and zero-carbon attributes of nuclear and advanced geothermal, will be stiff competition for fossil fuels that emit carbon pollution. The technology transition to electric vehicles is not a question of if, but when. This is bolstered by our now stark reality that the pollution that dirties our air and water makes people even more vulnerable to health crises like the COVID-19 pandemic.

Even watching what investors are doing in the face of cheap oil provides evidence that the future of clean energy is firmly entrenched. The chart below shows year-to-date returns from investments in several renewable energy exchange traded funds as compared to oil exchange traded funds (ETFs). All returns are down since the beginning of the year. However, look at the difference between fossil fuel and clean energy ETFs: The losses in fossil fuel ETFs are double or triple that of clean energy ETFs. 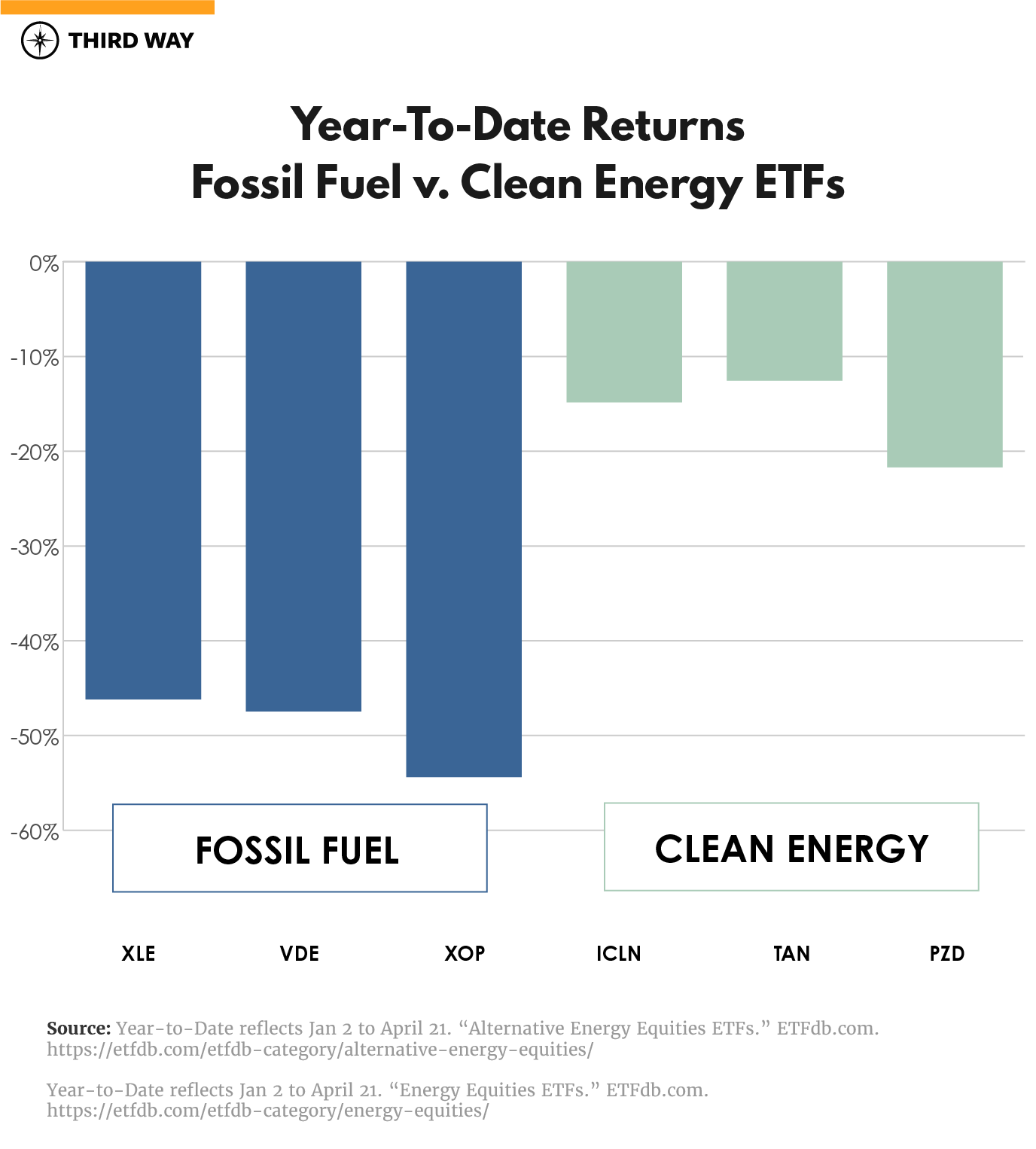 Has the world already moved on? Perhaps not quite yet, but if investors are crowding into clean energy positions this year, it is easily a sustainable flow of funds in the future as more people and policymakers recognize that it – climate and clean energy – is a job engine for recovery. Infrastructure, particularly construction of electric vehicle charging stations, solar and wind installations, data scientists to optimize the productivity of these renewable resources, battery cell plants construction, batteries to store renewables on the grid, advanced nuclear and other low and no emission energy plays will begin to garner more long-term investment.

What Next? Rescue and Recovery

First things first: Any planning really begins with rescue and recovery. Once we address the immediate public health crisis and provide essential aid to laid-off workers, businesses struggling to stay afloat, and state and local governments getting decimated, the federal government and states should focus on clean energy infrastructure and innovation as key parts of getting our economy running and people back to work.

As part of that long-term rebuilding effort, Government needs to do two other BIG things. First, and most important, governments must help communities and workers hammered by the collapse of oil by providing them resources to diversify their economy and create new jobs. We don’t want to allow entire communities gutted by oil prices and states with a long-term tax gap as a result of an oil economy that swamps their ability to function.

Second, we should also explore whether it’s time to create a new mechanism to ensure we don’t simply fall back into old habits. This could include incentivizing the purchasing and permanent sealing of existing wells and shale oil deposits. An existing non-profit like The Nature Conservancy, a new Reconstruction Finance Corporation or other bank, or companies outside the energy space with positive cash flow and interest in expanding into these communities could buy the wells, as long as they commit to never re-opening or producing from them.

Such a fund could invest in other economic activity within the community, offering grants, tax credits, or the equivalent of oil depletion allowance. Such an allowance could be administered as a community recovery credit. Push ahead, advance and grow, and manage the risks before us in a way that offers new opportunities. Obviously, there would be significant down-stream impacts from any intentional reduction in US domestic oil production. We would have to carefully consider those impacts, not only on the workers and communities involved in oil production but on the US companies who rely on oil and oil consumption in the manufacturing and use of their products.

The oil sector was struggling before the pandemic. Now, it is in a moment of crisis. We need to move quickly to help the workers and communities hurt by this collapse. While it also may feel difficult to do, we also should keep one eye on the future. Rather than simply rebuild the energy economy of 2019, it’s time to at least consider how we might do things differently to build energy systems and communities that are more durable.