When we launched this blog series at Third Way a month ago, the hunch was that the health crisis would bring us to the brink. One of our blogs was titled, “Second Inning,” as in we are in the early stages of the crisis. I wish I could go back and retitle that one to “First Inning.” As I bring to you my take on the data coming in, the dimensions of the challenge before us are expanding in ways that rival even our darkest imagination. Let’s take a look at where we stand today. Since we have never experienced a health crisis shutdown, the headlines are shocking.

On the Workers’ Side: Jobless Claims

This morning’s release of last week’s claims for unemployment insurance indicated that 5.2 million workers filed for benefits in the week ending April 11th. Add to this the prior weeks’ surge in claims, there are over 22 million people getting support. The magnitude of these layoffs cannot be understated.

The details of the report showed a surge of claims in Georgia where in just one week claims were 256,212 – workers were laid off in a slew of industries there, such as accommodation and food services, trade, health care and social assistance, administrative, support, waste management, and manufacturing industries.

Relying on unemployment insurance benefits helps to mitigate some of the carnage we saw during the 1929 – 1933 Great Depression. The US did not have the safety net to catch laid off workers in those days nearly 100 years ago. It doesn’t ease the pain and anxiety families feel when they are not able to go to work and bring home a paycheck. The CARES Act provisions are clearly establishing a vital support for many families represented in the chart below. 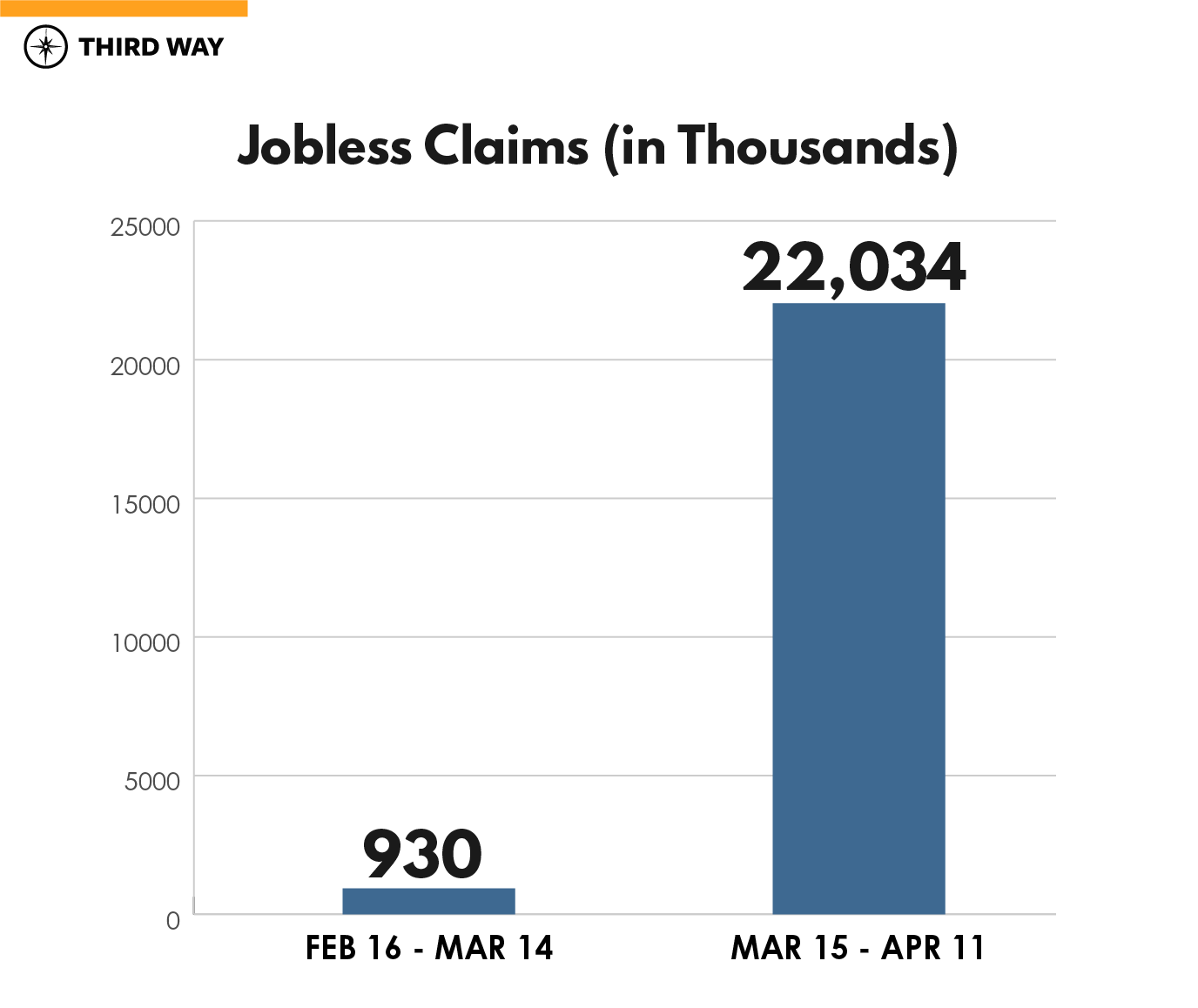 On the so-called front end of the markets, there was a shocking drop in retail purchases of goods and food services last month. In one month, sales were down 8.7%, the biggest one month drop on record. Consumer purchases of clothing fell 50%. Furniture sales were off by nearly 27%. Sales of autos and parts fell over 25%. Department store sales dropped nearly 20%. 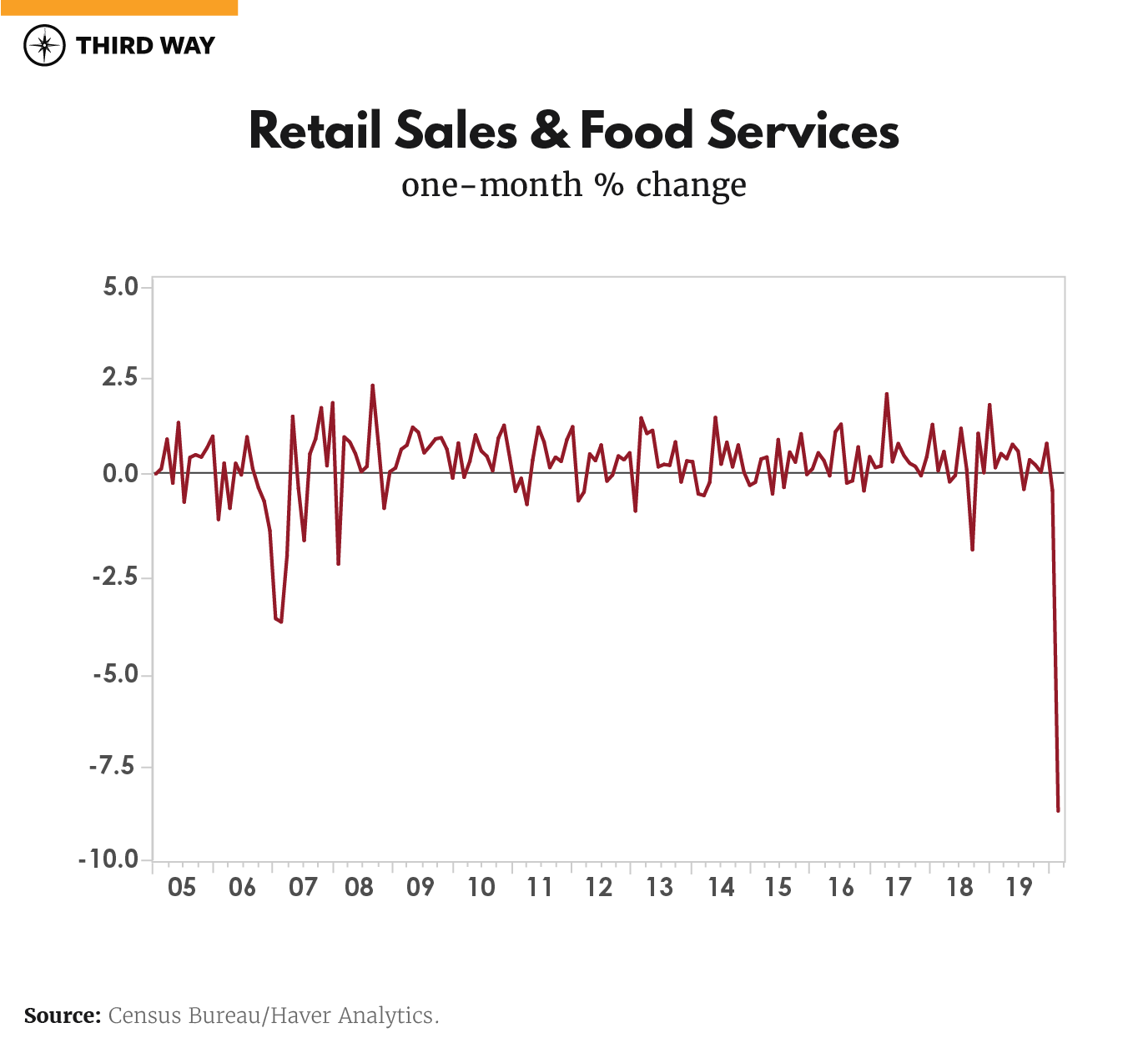 Anything that was nonessential and required a crowd to buy were shuttered.

How about the month of April? Expect the non-essential retailers to see sales fall much further, perhaps in excess of 50%. Meanwhile, online business should expand along with our infrequent but necessary trips to the grocer and pharmacy.

On the Industry Line: March Data

The plunge in industrial production of over 5% in one month was a larger drop than during the 2008-09 recession. 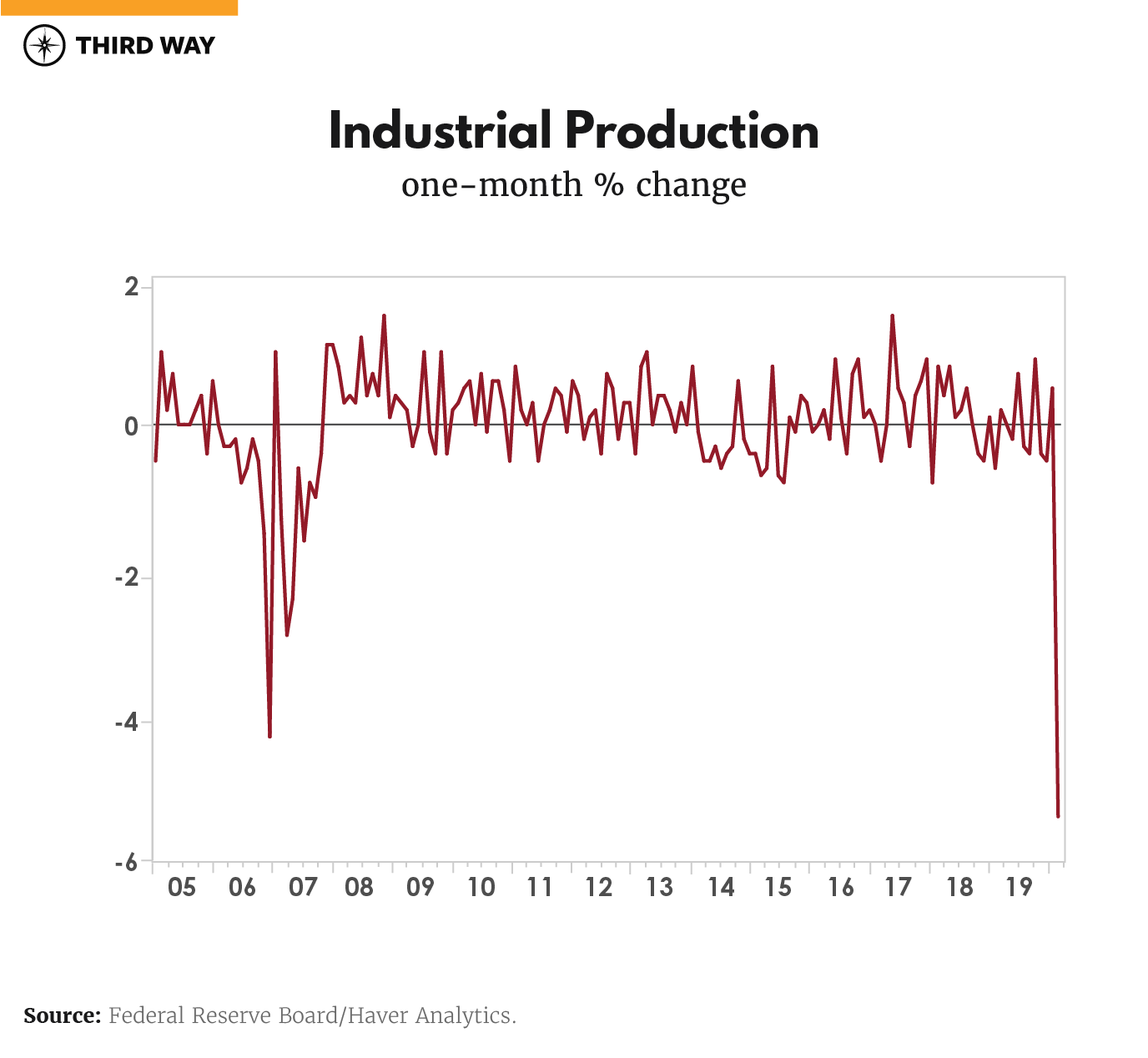 On the Home Front: March Data

The National Association of Home Builders (NAHB) Housing Market Index gauges the sentiment through a monthly survey. The April reading dropped the most on record. With concerns about what the economy will look like after the shutdown, builders are already pulling back and resizing their prospects.

This morning the US Census Bureau reported that March housing starts fell by 22.3%, to 1.216 million units annualized, the biggest monthly drop since 1984.

On the Global Front: IMF Forecast

Yesterday the International Monetary Fund (IMF) projected a global economy entering a Great Depression. Perhaps it is hard to grasp exactly what that means. They released the US economic forecast below which shows the economy contracting by 5.9% this year along with unemployment rising to 10.4%. When the US Department of Labor released the March unemployment rate last Friday, it stood at 4.4%. As for the IMF forecast for 2021, we can only hope for such an optimistic outcome.

Much policy has been thrust on public health, workers, businesses, and communities. Third Way’s policy teams have done some deep thinking on how to amp up policies to help rescue this nation. The magnitude of the crisis, as represented by the data being released, will warrant a close look at these policy recommendations and even more.

We could experience an economic upheaval which rivals the experience of the Great Depression. What happened then?  Unemployment rose to 25% between 1929 and 1933. In 1930, the economy contracted by 8.5%. Then it fell 6.4% in 1931, and then fell 12.9% in 1932, and then fell again by 1.2% in 1933. Long and protracted. Different this time are the social safety nets in place, however imperfect, to tackle this health and economic crisis. With policymakers attacking this challenge with speed, breadth, and efficiency, we could do much better in the weeks ahead. But urgency is needed. Even our conventional safety nets for unemployment, health, and security do not stand up to the ramifications of the turmoil caused by a pandemic.