There is an opportunity crisis in America. As proof, look no further than the tens of millions of American workers who currently have no shot at a comfortable retirement. The shocking reality is that every single day, half of the private sector workforce shows up at a job and does not earn anything for retirement beyond Social Security. There are proposals in Congress to increase Social Security benefits for all, but the truth is that these plans are very expensive and the added benefits they provide to most seniors are so modest as to not materially change the living standards of the elderly.

Retirement security will remain a top issue among voters, particularly those who worry they won’t have enough to live comfortably and with dignity in their senior years. Beyond preserving Social Security (the Trust Fund is expected to be gone by 2034) and expanding it for low-income seniors, what can those running for office propose? Below we offer a series of options including a plan to require all employers to chip into a private retirement account separate and on top of Social Security as well as other important changes that make it easier for people to save.

Anyone running for office in 2020 needs to confront the opportunity crisis head-on, as the evidence is overwhelming and voters are crying out for help. As a central part of that, policymakers need to make sure that in the 21st century, every American worker will have ample private retirement savings in addition to their Social Security.

Anyone who puts in a lifetime of work should be able to have a comfortable retirement. But that is simply not an option for too many in this country.

The majority of Americans are worried. Our polling shows that 63% of Americans have some or a large concern about having enough money for a comfortable retirement. That concern is even higher among Democrats (67%).

Only half of all workers are earning retirement savings while on the job. Just 51% of private sector workers are participating in a retirement plan. This includes both traditional pensions and employer-sponsored investment plans like 401(k)s. Only 68% of workers even have access to such a plan.1 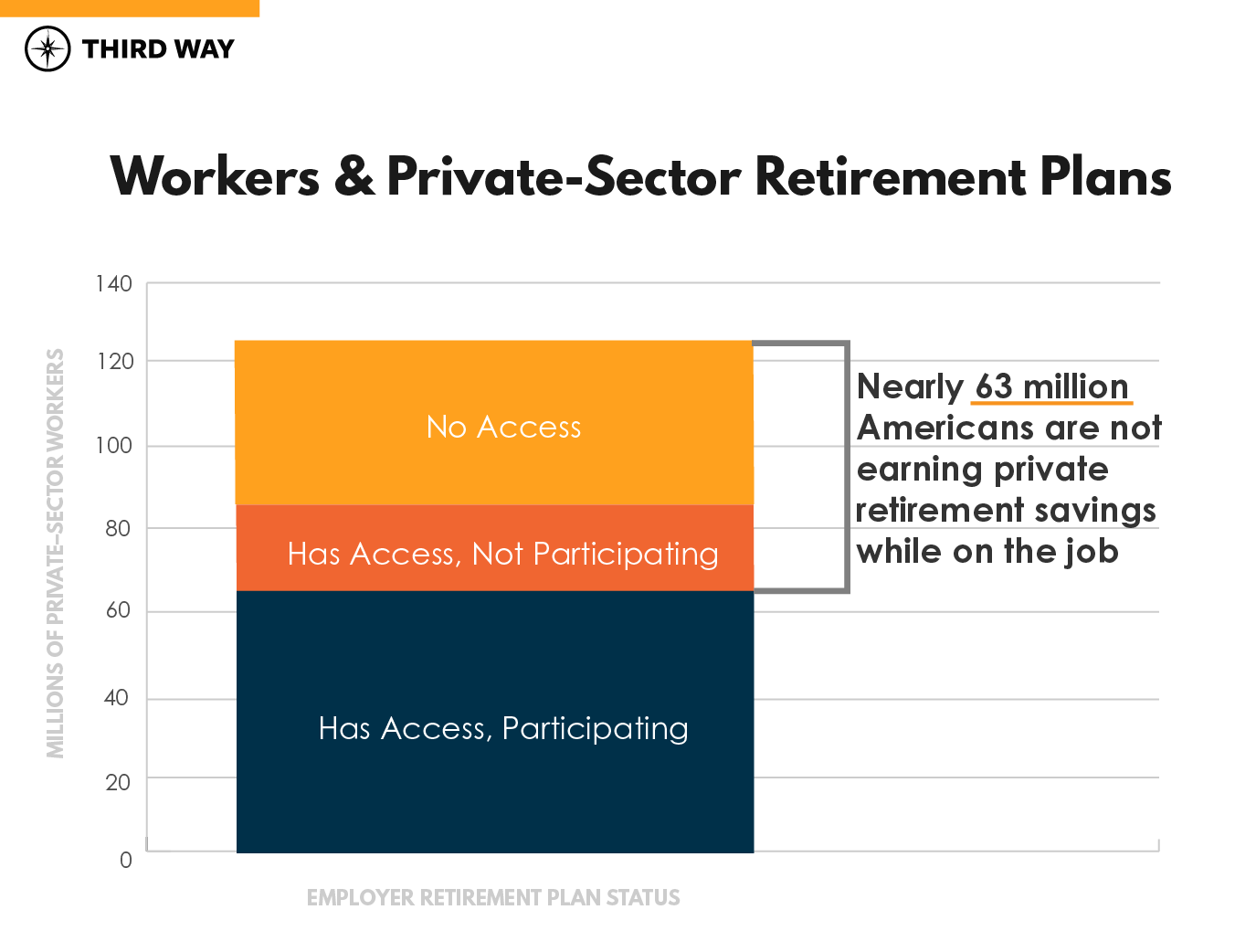 401(k)s have structural issues. For workers with defined contribution plans, the amount of savings available upon retirement depends, in part, on how much they are able to save during their working years. In some cases, workers may not be aware these plans are available to them or do not participate because they need assistance in enrolling and picking investments. Other workers simply don’t have the resources to make a contribution on their own.

Contractors are often left out. Jobs are more portable than ever with contract employees, gig economy work, and freelancing. These types of workers are two-thirds less likely to even have the ability to get a work-sponsored retirement plan compared to directly employed workers.4

Even those who do save for retirement don’t have enough saved. The typical amount saved by working-age Americans is just $40,000, among those that are saving at all. As a result, only a quarter of people ages 21 to 64 are on track to meet recommended retirement savings targets.5

In addition, insecurity has caused more Americans to put off retirement. Nine million seniors (about 1 in 5) are working, up from 4 million in 2000.7  The workforce participation rate of workers ages 65 to 69 rose from 22% in 1996 to 32% in 2016. While some people may prefer to remain in the workforce, many simply cannot afford to retire.8

There are numerous ways to ensure that workers have robust private retirement savings on top of their Social Security. Here are a select few:

Third Way has proposed that every worker have a private retirement account that requires employers to chip in. Employers would be required to pay at least 50 cents per hour worked into a retirement plan. If an employer is not currently providing any money for retirement then the employee could receive the required contribution in a simple and portable account that resembles the federal Thrift Savings Plan. Workers would be encouraged to contribute if they were able to. This employer contribution would accumulate to nearly $200,000 (2018 dollars) of savings for a full-time working-age individual by age 67. This would be on top of Social Security.10 A version of this idea, the SAVE UP Act, was introduced in 2016.11

Professor John Friedman of Brown University has proposed to replace all tax-advantaged retirement savings accounts with a single, portable Universal Retirement Saving Account for each worker. The plan would also provide a tax credit to employers that automatically enroll their workers in a 3% contribution, which automatically increases each year until it reaches 8%. Employees could opt out of auto-enrollment and auto-escalation. 12

The Bipartisan Policy Center, through its Commission on Retirement Security and Personal Savings, recommends creating Retirement Security Plans that would allow employers, particularly small businesses, to join together to offer their workers retirement plan options. The BPC also recommends establishing a nationwide minimum-coverage standard that would require employers with 50 or more full-time employees to 1) offer a retirement plan such as a 401(k); 2) automatically enroll employees in a Retirement Security Plan; or 3) automatically enroll employees in an improved myRA13. Employees could opt-out of these plans or adjust their contribution levels.14

Rep. Richard Neal (D-MA) proposed legislation in 2017 (H.R. 4523) that would require employers to offer their workers a 401(k) or 403(b) plan, with certain employers exempted (churches, governments, and employers with fewer than 10 workers). Workers would be automatically enrolled contributing 6% of their pay, with this level automatically increasing each year to 10%.15

Senator Mark Warner (D-VA) and Rep. Jim Himes (D-CT) proposed a new retirement savings account called the Portable Retirement and Investment Account (PRIA). A new federal board would establish a PRIA for every American when they get their Social Security number. PRIAs would be portable from job to job and would not replace existing retirement plans such as 401(k)s and IRAs. Workers could choose to invest their PRIA savings in either a target date fund or in a broader array of investments. 16

Under the proposal from the Senate Democrats in 2017, employers that don’t offer their workers a retirement plan would be required to automatically enroll them in payroll deduction contributions to an IRA, with the level of contributions increasing automatically over time. Workers could opt out of participating in the auto-IRA program and could opt out of auto-escalation. This proposal would raise the 401(k) contribution limit from $18,500 to $24,500, and $30,500 for workers 50 and older. The proposal would also provide tax credits to encourage employers to match 401(k) contributions, with the tax credit equaling a percentage of the employer match. 17

The Center for American Progress proposed that employers that do not offer their workers a retirement plan would be required to automatically enroll them in a National Savings Plan, modeled after the Thrift Savings Plan for federal workers. The initial contribution level would be 3% of a worker’s paycheck and would automatically rise over time to 6%. Workers could opt out of auto-enrollment and auto-escalation. 18

Senator Jeff Merkley (D-OR) and Rep. Jared Huffman (D-CA) proposed legislation (S. 324219 and H.R. 108320) that would automatically enroll private sector workers who don’t have access to employer-based retirement plans in personal American Savings Accounts, which would be modeled on the Thrift Savings Plan for federal workers. The default contribution level would be 3% from a worker’s paycheck. Workers could opt out of participating, and could adjust their contribution level to as low as 2% or up to an $18,000 maximum.