Universal Private Retirement Accounts: A Lifetime of Work Should Mean a Great Retirement for Everyone

We can reverse the widening wealth gap and make a comfortable retirement the rule, not the exception, for all working Americans. It would cost the federal government anywhere from little to nothing and would not require anyone to pay higher income or payroll taxes. And at age 67, working-wage Americans would have nearly $200,000 in a retirement account to supplement their full Social Security benefits.

How? Require all employers to pay at least a nominal amount into an employee-owned private retirement plan that would be completely separate from, and on top of, Social Security. This would give half of working America what the other half of working America already has: private, portable retirement savings that could match or exceed their monthly retirement benefits from Social Security. It would provide every worker—gig, restaurant, contract, custodial, health care, retail, and more—the same type of retirement benefit office workers and executives enjoy now.

In this report we propose Universal Private Retirement, which guarantees that every American worker has robust private savings no matter what type of job they do.

With UP accounts, a full-time worker who does nothing other than the minimum employer contribution would retire with $188,000 in 2018 dollars at age 67, if financial instruments perform over the next 45 years like they did over the past 45 years. That comes out to a $7,500 yearly annuity, supplementing by half their Social Security income which would not be touched.

A lifetime of work would once again mean everyone would have the same opportunity to save for retirement and have real wealth and financial security they can count on. They would have wealth to pass on to children or a spouse. The wealth gap between the top and the rest of America would significantly shrink. And a lifetime of work would guarantee a comfortable retirement.

Just 51% of private sector workers are participating in a retirement plan. This includes both traditional pensions and employer-sponsored investment plans like 401(k)s. Only 68% of workers even have access to such a plan,1 putting a dignified retirement out of reach for too many Americans.

Workers with defined benefit pensions who did not save for their retirement would still be guaranteed to receive pension payments for the rest of their lives after retiring, no matter how long they lived. For workers with defined contribution plans, the amount of savings available upon retirement depends in part on how much they’re able to save during their working years. In some cases workers may not be aware these plans are available or need help participating in them. Other workers may not get an employer contribution and simply don’t have the resources to make a contribution on their own.

Workers who do save for retirement often don’t save enough; among working age Americans with retirement savings, the typical amount saved is just $40,000. As a result, only a quarter of people ages 21 to 64 are on track to meet recommended retirement savings targets.3

The implication of this is that too many seniors face financial insecurity or have to put off retirement. Of the 51 million adults over 65 in the US, 7 million—or 1 in 7—live below the poverty line.4 The rate at which Americans 65 and up file for bankruptcy is three times what it was in 1991, and bankruptcy rates for people 55 to 64 is up by two-thirds.5 This insecurity has caused more Americans to put off retirement. Nine million seniors (about 1 in 5) are working, up from 4 million in 2000.6 The workforce participation rate of workers ages 65 to 69 rose from 22% in 1996 to 32% in 2016.7 While some people may prefer to remain in the workforce, many simply cannot afford to retire.

Several factors are driving this rising economic distress. Housing presents a significant expense for seniors, particularly those with lower incomes. In 2013, senior households spent nearly a quarter of their income on housing. Among lower-income senior households, that figure was 74%. Forty-one percent of older Americans have a mortgage, up from 21% in 1989. And more Americans are entering retirement with other forms of debt; a rising share have credit card debt or student loan debt from their children.8

Out-of-pocket health costs also eat up a considerable share of older Americans’ incomes. It’s a disturbing reality that even the population fully insured by Medicare faces staggering out-of-pocket expenses. In 2014, the average Medicare beneficiary spent $2,965 on premiums and $4,274 out-of-pocket altogether, not including long-term care. Those figures rise with age, so the oldest age groups find a substantial portion of their Social Security benefits are consumed by these out-of-pocket expenses: 40% for people ages 75-84, and 74% for those 85 and over.9

It is unlikely that the decades-long shift away from defined benefit pensions will reverse course. And while all Democrats support raising Social Security benefits for low-income Americans, plans to raise Social Security benefits for all retirees do so in amounts so modest that they won’t materially change the financial well-being of the elderly. Lowering housing costs, medical costs, and consumer debt would help retirees considerably, allowing their dollars to last longer during retirement. It is clear, however, that workers also need private sector savings to ensure a dignified retirement.

The Idea: Universal Private Retirement On Top of Social Security

Universal Private Retirement would guarantee every American worker has robust private savings—completely separate and in addition to Social Security. Here’s how our plan works.

We have a minimum wage; we must also have a minimum employer private retirement contribution. To support Universal Private Retirement, all employers will be required to pay at least 50 cents per hour worked into retirement funds for each of their workers.

For many employers, this requirement is already met and nothing would change. They may satisfy the minimum contribution requirement with their current defined benefit plan, 401(k), SEP IRA, or Simple IRA plans. A company that pays at least $12.50 per hour to all employees and provides a 4% retirement contribution would change nothing. Nothing would change for a unionized auto plant or a public employer who provides a defined benefit plan. But other employers would have to make adjustments to their existing plans, such as:

Many employers, however, would have to begin providing a retirement benefit for the first time. These employers can be divided into two categories:

Paying into a worker’s UP Account would be as simple as direct deposit. UP Accounts would have the same core features as the Thrift Savings Plan for federal workers. The system would be overseen by a government board but carried out by private industry. Accounts would be individually owned by workers, and workers would be able to take those accounts with them from job to job. Contributions would be automatically invested in low-fee lifecycle funds—fully diversified and tailored to the saver’s age—but workers could opt for other investments (just like federal workers can do with the Thrift Savings Plan). At retirement, the default distribution would be as a lifelong annuity, but workers could opt for a lump sum distribution.

Even with the administrative ease of UP, some small employers could feel pinched by the cost of the 50-cent contribution. To ensure that UP does not deter new hiring, a small tax credit could help employers adjust over a decade. In the law’s first year, all employers would get a tax credit equal to 45 cents per hour worked for up to 20 workers. That credit would slowly phase down, by 5 cents an hour per year, until the minimum retirement contribution is absorbed as part of the social contract. The existing federal tax expenditures on retirement provide plenty of ways to finance the new credit. For example, the Obama White House proposed ending tax breaks on retirement savings for people who have already amassed $3.4 million in tax-favored accounts.12 We propose setting this threshold at $4 million and indexing it to account for annuity costs and projected living costs during retirement.

Workers would be encouraged, but not required, to contribute their own savings to UP accounts. Since the account is automatic there would be no need to create one. Employers would automatically enroll their workers to save up to 3% of their pay, but workers who feel they cannot afford to save could freely opt out of contributing. Automatic enrollment can increase participation; while workers could opt out, research has shown that 91% would choose not to—as opposed to 42% who would proactively choose to opt in.13 Workers’ savings could automatically escalate by half a percentage point annually, capping out at 5%. Workers concerned about straining their finances could choose to opt out of this escalation and keep their contributions level from one year to the next. By implementing other measures like increasing the regional minimum wage and expanding the Earned Income Tax Credit, we expect more workers will have the ability to contribute.

As is the case with 401(k) plans currently, workers could begin collecting from their UP Accounts as early as age 59 ½ without incurring a penalty. The default payout, however, would occur at the Social Security normal retirement age. And the default method of the payout would be in the form a lifetime annuity with a spousal guarantee. In other words, UP Account owners would receive a monthly check for as long as they live, and if they are outlived by a spouse, their spouses will continue to receive that monthly check until death. That said, UP Account holders could also opt to draw from their savings in the form of a lump sum or by choosing an amount to withdraw each year.

What would be the full impact of these proposals? Third Way modeled the savings growth of a high school-educated worker, whose earnings peak at $42,000 a year at age 50. Under this proposal, the worker would accumulate $382,000, in 2018 dollars, if retiring at 67 with 45 years of work and contributing only 3% of wages. That would be enough for an annuity of about $1,300 per month, which would come close to doubling their income from Social Security. But even if this worker didn’t feel comfortable putting aside 3% of their income in the UP account, the employer contribution alone would let the worker save $188,000.14 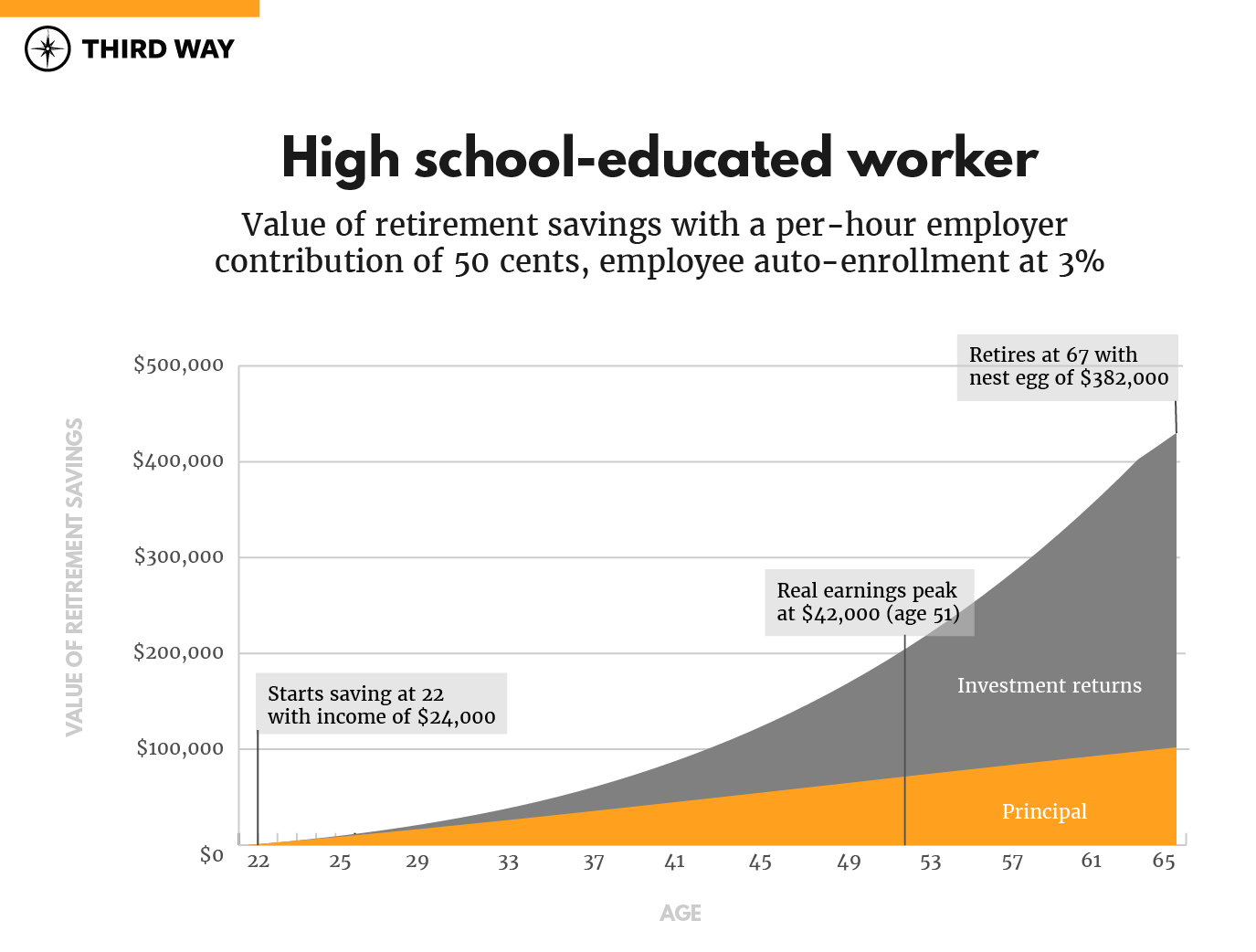 Every American, no matter their occupation or education level, should have the ability to retire when they reach old age and still afford basic necessities like food, housing, and health care. Today, however, a comfortable retirement remains out of reach for millions of Americans. We can tackle the retirement savings gap and support Universal Private Retirement through a minimum retirement contribution from employers, the creation of a new, portable Universal Private (UP) retirement account, and automatic contributions from workers. This partnership between employers, government, and workers will ensure that older Americans have the ability to live with dignity after a lifetime spent working.