How the Sanders Social Security Plan is Not Progressive

There have been growing calls among some in Congress and organizations on the left to expand Social Security for all current and future retirees. These calls have been picked up by two Democratic candidates for president. Vermont Senator Bernie Sanders introduced the Social Security Expansion Act (S. 731), which would increase Social Security benefits for all beneficiaries. Former Maryland Governor Martin O’Malley has unveiled a similar, although less specific, plan.

Giving out more Social Security benefits to every single American might poll well, but a careful analysis shows that the Sanders and O’Malley plans can defy progressivity, reward well-to-do seniors at the expense of younger Americans, and are fiscally unsound. In this memo, we focus specifically on the Sanders plan because the details are known. What becomes clear is that the leading proposal to expand Social Security benefits for all is not very progressive. We explain three reasons why:

1. Wealthy seniors get $5 in new benefits for every dollar poor seniors get.

The Sanders plan increases Social Security benefits for all seniors, regardless of income and whether or not they’ve paid more into the system. It does so by altering the benefit formula and switching to a more generous index for cost-of-living adjustments. A less costly provision in the plan modestly increases the special minimum benefit for lower-income retirees. (See appendix for more details).

There is widespread support for an increase in benefits for low-income individuals. This idea has been proposed as part of multiple bipartisan Social Security plans, all of which actually would restore full solvency to the program.1 Even though Sanders’ change to the minimum benefit would leave out many very low income retirees, this policy is a relatively inexpensive way of boosting the retirement security for some of those who need the help.

However, 82% of the benefit increases in the Sanders plan are not targeted for those who most need the help; rather, they are broadly applied to all beneficiaries regardless of need, conferring larger dollar amounts of increases on well-to-do retirees.2 As a result, based on a detailed economic simulation, we determine that when the Sanders plan is fully phased in, 25.2% of new Social Security benefits will be given to seniors in the top quintile, 49.7% in the top two quintiles, and only 5.0% for those in the bottom quintile.3 In effect, the Sanders plan raises taxes on those at the very top and recirculates half of that revenue to seniors in the top two quintiles. In fact, in terms of new benefits, the bottom quintile fares the worst, followed by the near poor, then the middle class, the upper middle class, and at the top is the wealthy. 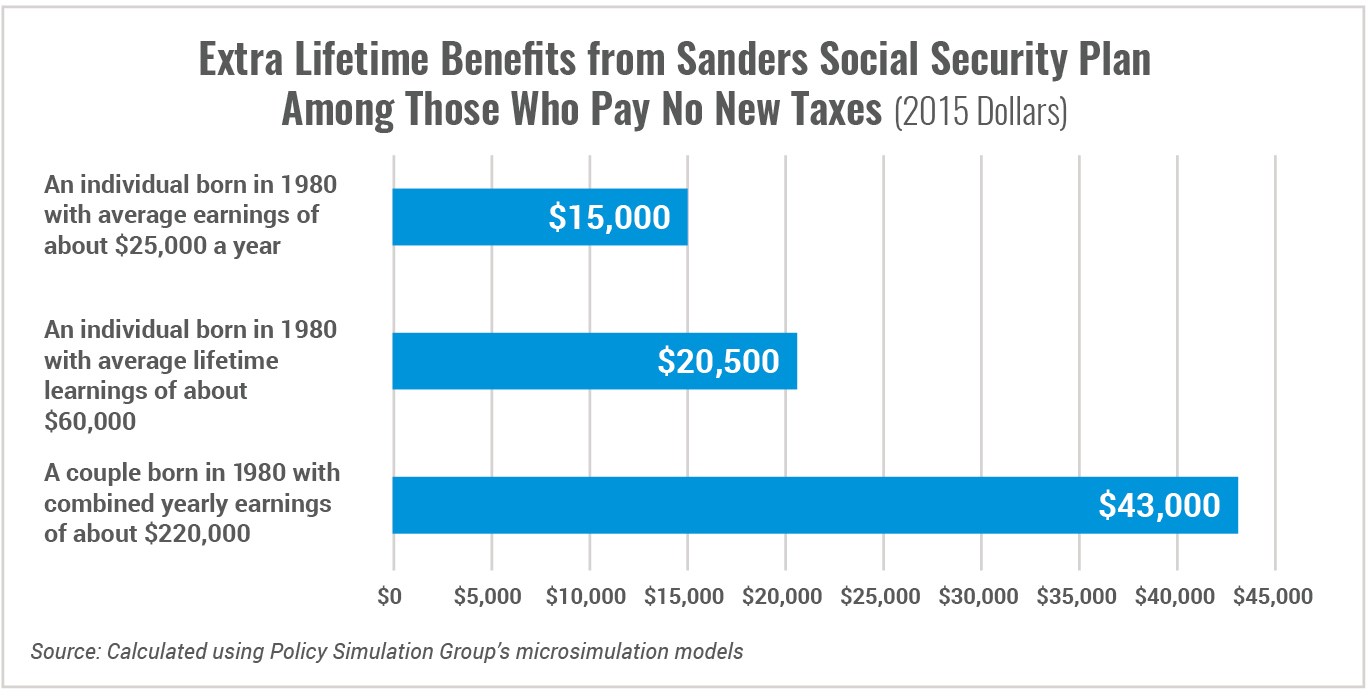 Over the course of a lifetime, a well-to-do couple with $220,000 a year in combined earnings would take in an additional $43,000 in new Social Security benefits (in 2015 dollars).4 This couple would not contribute a single penny more to the Social Security Trust Fund. A low-income senior would benefit as well, but by far less: $15,000 over the course of a lifetime for a single, poor earner. Only those with exceptionally high incomes would fare poorly. For example, a couple—earning a total of $1 million per year—would likely be subject to $2 million or more in additional taxes over their lifetime, a sum much larger than their lifetime benefit increase of about $43,000.

Any plan to make Social Security solvent will raise taxes substantially. This tax increase is likely to fall on wealthier taxpayers, though some plans increase taxes on all workers with a payroll tax rate increase in addition to new taxes on the wealthy (by lifting or eliminating the payroll tax cap). Because the Sanders plan has two purposes, extending solvency and increasing benefits for all, the tax increases in his plan are enormous, totaling $1.6 trillion over the first ten years. In the Sanders plan, the tax increases fall mostly on individuals with more than $250,000 in wage income.5

The Cost of Benefit Expansions for the Well-off 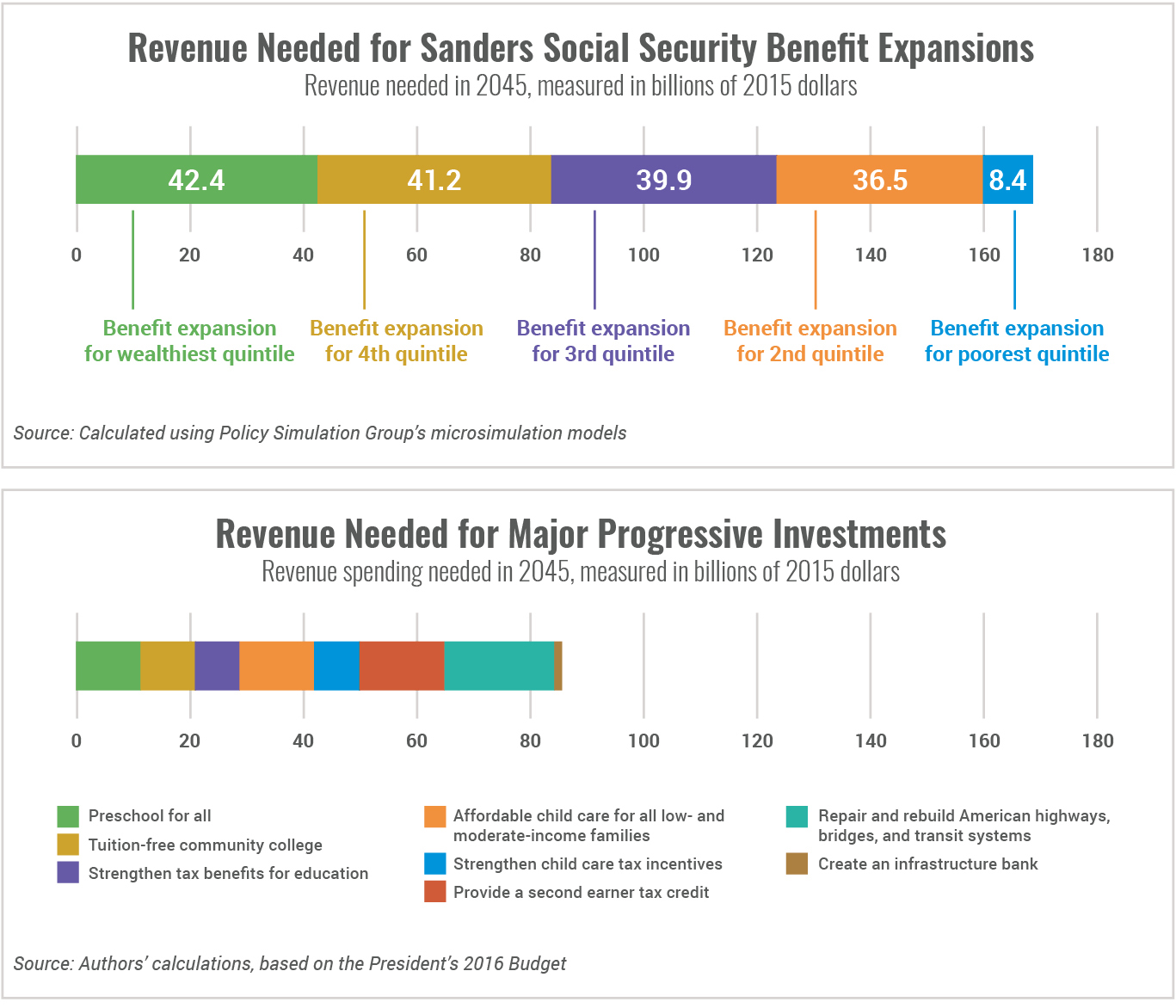 We must collect more revenue from the wealthiest in our society. But realistically, our political system does not have the appetite to pass this enormous tax increase and come up with another tax increase to pay for domestic priorities, higher Medicare spending, and any new national security needs. The largest tax increase of the Obama presidency, the fiscal cliff deal, was roughly two-fifths the size of the tax increase Sen. Sanders calls for.7 This would be dedicated all to one program with the new spending weighted towards those who are wealthy or well-to-do.

Despite the size of its tax increases, the Sanders plan does not achieve solvency. In 2065, under his proposal, all Social Security beneficiaries, in retirement, on disability or on survivors’ benefits, would see an automatic benefit cut of 12% without additional action by lawmakers.

The Sanders plan doesn’t achieve solvency because over the next two decades, the number of Social Security beneficiaries increases by 50%, while the number of working people paying into the system increases by only 15%.8 This massive shift is a consequence of both falling birth rates and rising life expectancy for senior citizens. This demographic bubble makes increasing Social Security benefits for all especially difficult and costly. Even an immediate and complete removal of the payroll tax cap would not fully eliminate the shortfall—and that's without any benefit increases.

As far as we can tell, there is only one Social Security expansion plan that does achieve solvency, introduced by Representative John Larson (D-CT). This plan illustrates how difficult it is to expand benefits for all without raising taxes on the middle class. In addition to raising taxes on upper-income workers, the Larsen plan would gradually increase the payroll tax rate, from 12.4% to 14.8%, between 2018 and 2041, and again up to 15.2% between 2080 and 2084.9 How meaningful is that tax increase? A worker making the equivalent of $60,000 a year would be subject to an additional $1,440 in taxes, once the first tax increase is fully phased in.

To be sure, some current and future retirees are well short of the savings they need to maintain their pre-retirement standards of living. And there is a crucial policy discussion to be had about how we can get more individuals to increase their personal wealth during their working years. To that end, Third Way has proposed a minimum pension for all workers as well as Wealth Builder Contributions, both of which would increase savings.

Likewise, adjusting benefits for seniors at the lower end of the income scale is imperative. That is why the major bipartisan Social Security plans manage to lift benefits for the elderly poor, while fully restoring the trust fund’s solvency. But in 2013, more than 3.9 million senior citizen households filed income tax returns with adjusted gross income in excess of $100,000 (representing roughly 7.1 million seniors, or one-sixth of the elderly population).10 Every one of these seniors would get a windfall under the Sanders proposal. This hardly seems progressive.

Appendix: Tax and benefit measures in the Sanders plan

The Sanders plan calls for tax increases that fall on the highest earning Americans. The plan then uses that revenue to increase benefits for all in the program.