What Do Democratic Primary Voters Want?

For the next 12 months, one question will be looming in the minds of pundits, the press, and campaign operatives alike: What exactly do Democratic primary voters want? With a field that’s shaping up to be one of the largest and most competitive in modern political history, it is all the more important to understand the lens through which those voters will choose who will go head to head against President Trump in 2020.

Over the next year, Third Way and David Binder Research will conduct quarterly polls of a national sample of likely Democratic primary voters to help shed light on that question. Our first in the series was conducted one year out from Super Tuesday. While the primary is still nascent, and many things will change before the first voter casts their ballot, one thing is certain from our poll: Primary voters will pick their nominee based on who they believe has the best shot at beating Donald Trump.

Our survey shows that the imperative of beating Trump has concentrated the minds of these voters, and electability is the lens for the 2020 primary. Voters want a candidate who can win, and one who will stay focused on urgent challenges, such as reducing the cost of health care, helping out working- and middle-class families, and combating climate change. Primary voters also believe the way to win is to build a broad coalition that can deliver a decisive victory, rather than run a mirror image of Trump’s base-only strategy.

Name recognition is driving ‘electability’ early in the Democratic primary.

At this stage, voters are just beginning to learn about the vast field of Democrats who have thrown their hats in the ring to run for President. But they are already sure about their top priority for the eventual nominee: they want the person who is best positioned to beat Trump.

We asked Democratic primary voters to rank the contenders on a 0–10 scale based on electability – that is, how confident they are that each candidate can beat Trump. Right now, the 2020 field breaks down into four categories of electability: 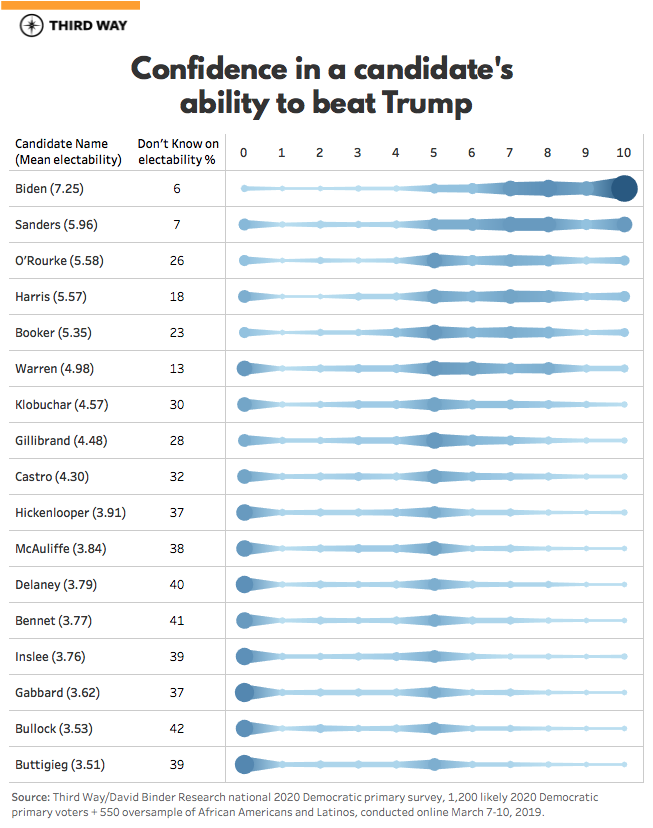 NOTE: This visualization shows responses to the question of how confident are you in [candidate’s name] ability to beat Trump? The darker the shading and larger the marker the greater the number of responses for that option.

It is almost certain that perceived electability will shift over the next year, perhaps dramatically, for both the frontrunners and the newcomers. For context, in the competitive Republican primary in 2008, former New York City Mayor Rudy Giuliani led Republican primary polls by 16 points a year before Super Tuesday. He withdrew from the race on January 29th, 2008, having failed to secure a single delegate.

Primary voters want a candidate who can win and unite the country to tackle urgent challenges.

Democratic primary voters’ top priority is to find a candidate who can beat Trump. To do so, they believe their nominee needs to build a broad coalition centered on addressing our country’s urgent problems. 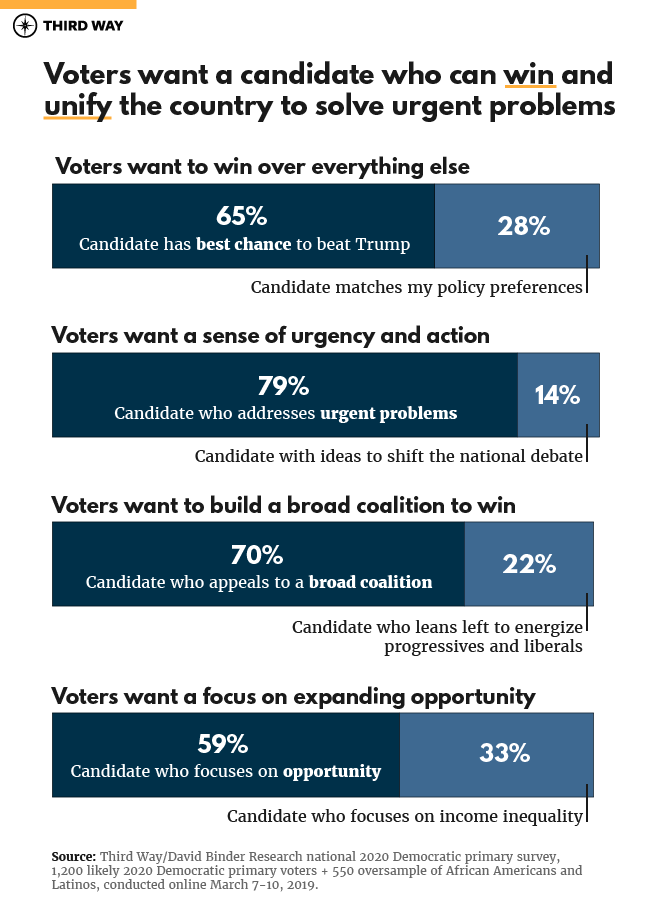 Across the board, primary voters view Trump as a scourge, and their overriding motivation is nominating a candidate who can beat him.

So how do they think their party can successfully defeat Trump? Primary voters think they need a candidate who can unite the country, not one who will pursue a Trump-style, base-only approach.

To unite a broad coalition, primary voters want a candidate who is laser-focused on the urgent challenges facing our country—not academic or abstract debates.

Primary voters’ urgency is driven by the fact that they feel there is an opportunity crisis in this country. Just 27% of voters say a local 17-year-old has more opportunity in their community than elsewhere in the country, while four in 10 say a young person would need to move away to find more opportunity. And for 2020, 59% say they want a candidate who will focus on expanding opportunity to more people and places, while 33% want someone who will focus on reducing income inequality. This desire for a focus on expanding opportunity is broadly felt across geographies; rural voters say to focus on opportunity by 36 points, suburban voters by 30 points, and urban voters by a 17-point margin.

Given Democratic primary voters’ laser focus on winning in 2020, we asked which issues they thought Democrats should focus on to accomplish that goal. They say candidates should prioritize issues that are urgent and impact peoples’ pocketbooks, and they are surprisingly apathetic about proposals advanced by the far left.

The number one issue for beating Trump is health care according to primary voters. Forty-three percent say reducing the cost of health care is the issue most important for beating Trump—less than half that number prioritize single-payer Medicare for All. For most primary voters, the former addresses a daily anxiety while the latter is an abstraction (at best). Next on the list after health care costs is putting more money in people’s pockets: 33% say reducing taxes for working- and middle-class families is vital (another 27% say the same about making the wealthy and corporations pay more in taxes). Primary voters’ third priority is climate change; 30% say it is central to beating Trump. 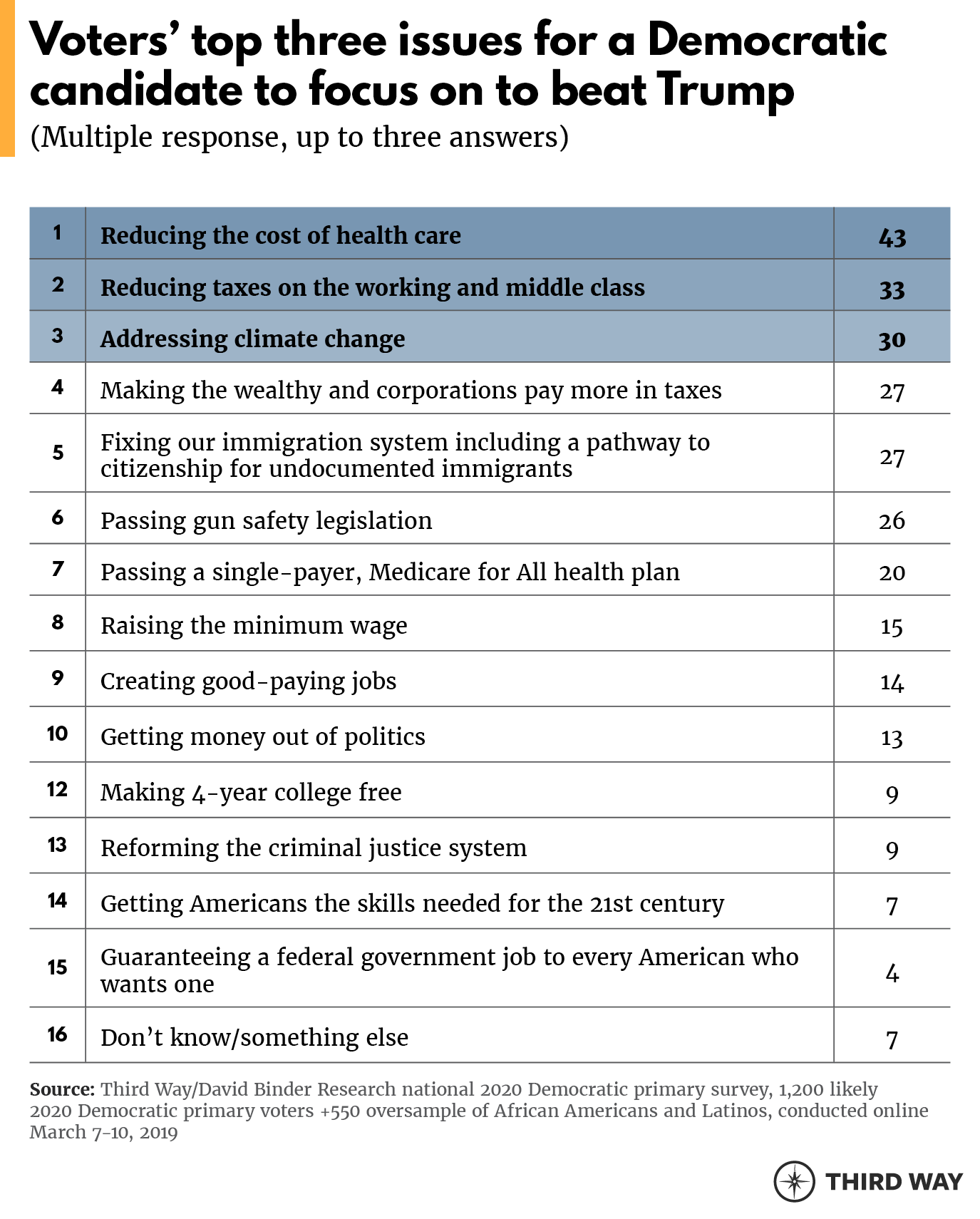 Democrats must win by building a multiracial coalition, and importantly, there is general consensus across racial lines on the top issues for defeating Trump. White, black, and Latinx voters all rate reducing the cost of health care as the top issue for toppling Trump. Cutting taxes for working- and middle-class families is priority number two for black voters, number three for whites, and number four for Latinxs. The biggest divergence is on climate change; it is the number two issue for whites and number three for Latinxs, but number nine for black voters. Outside of the three issues that popped across the board, Latinxs’ number two issue is immigration reform and black voters’ number three issue is gun safety legislation.

On the flip side, voters do not believe proposals associated with the far left provide a path to victory.

The Twittersphere bears little resemblance to the primary electorate.

Seventy-three percent of Democratic primary voters do not post on Twitter—and only one in 10 post daily. What Democratic politicians, operatives, pundits, and Extremely Online people read and internalize on Twitter are the views of a small minority—a minority that is in no way representative of the Democratic coalition (or even the primary electorate). Anyone who conflates the Twitter echo chamber with real life will find themselves far outside of the mainstream of what Democrats are looking for in 2020. On several important questions, we found a 20- to 30-point gap between what people who post on Twitter support, compared to people who do not post on Twitter, with those engaging online being far more ideologically driven and rigid. 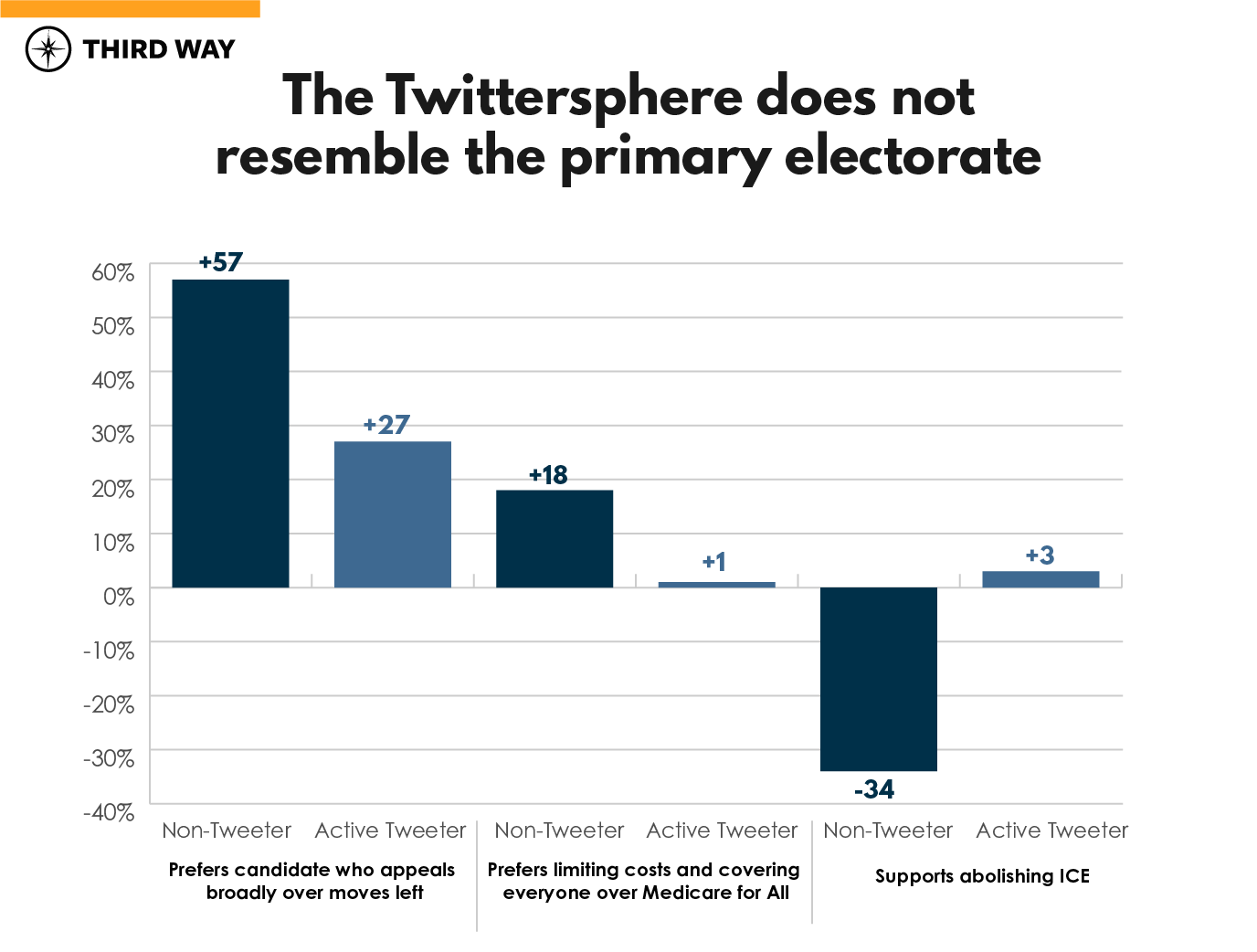 Primary voters on Twitter may be paying outsized attention to the contest a year out from Super Tuesday (on average, just 17% of active Tweeters lack an opinion on candidates’ electability, compared to 34% of primary voters who do not post on Twitter). But Democratic candidates should take care to remember those Tweeters are a tiny slice of the electorate and do not reflect the pool of voters who will be making the real decisions at the ballot box—even in the primary.

The Democratic primary will take many unexpected twists and turns over the next year, but the North Star for its voters will be finding the Democrat who can beat Trump. While the chief consideration for a candidate is their ability to win, they also want someone who is focused on urgent challenges, specifically: reducing the cost of health care, helping out working- and middle-class families, and addressing climate change. Democrats desperately want to win decisively in 2020, and voters believe that the way to do that is to build a broad, inclusive coalition that sends Trump packing.