Avoiding the Funhouse Mirror Effect in the Democratic Primary

In the aftermath of Election Day 2016, it became clear that we’d experienced the campaign through a funhouse mirror. Our friends, Facebook and Twitter feeds, even the New York Times election forecast needle: all of it had been wrong. Most of us inside the beltway were shocked by the result precisely because of the insular way in which we experienced the race; opinions offered by peers and family, discussions around the water cooler, and content posted on our social media feeds reinforced a shared (and flawed) sense that Donald Trump had no chance to win.

We are now at risk of losing sight of reality again—this time in the Democratic presidential primary. The first votes are not for seven months, but already, a minority of hyper-engaged Democrats are working hard to shape the race—and we’re riveted by them. Yet these hyper-engaged Democrats are not representative of the primary electorate, and conflating the two creates a “funhouse effect” that is about as accurate as the image you see in a circus mirror. If campaigns take their cues from just this narrow segment of voters—and come to believe that they are a proxy for the whole pool of Democratic voters—we could go off course and find ourselves in a weakened position against Trump come next November.

To counter this refraction, Third Way has devoted its second quarterly poll of likely Democratic primary voters to exploring this divide between all primary voters and the subset of the hyper-engaged. The results show that most Democrats haven’t even tuned into the primary yet, and the real picture of those who will cast their ballots to choose the nominee looks very different from what we see on Twitter. More than two thirds of primary voters say to beat Trump, a candidate should build a broad coalition and focus on urgent problems, not shift the debate to the left. A plurality personally identifies as moderate. Just 26% say the party should become more liberal in order to beat Trump.

The hyper-engaged should have a voice in the primary debate, but they should not be the only voice—nor should we fool ourselves into thinking they are representative. We must shatter the funhouse mirror to put Democrats on the right track to beating Trump in 2020.

1. Democratic primary voters want to win, and most think a broad coalition focused on urgent problems is the way to do it.

Before diving into the divide between hyper-engaged Democrats and all Democratic primary voters, it’s clear there is agreement among most voters on the broad approach they are looking for in a 2020 candidate. Consistent with our first quarterly poll, primary voters’ first criterion is that they want someone who can beat Trump. And they say the way to do this is by building a broad coalition instead of going left, focusing on urgent problems over shifting the national debate, and prioritizing getting things done over bold but stubborn stances.

When it comes to an economic agenda, a core part of every presidential campaign, 58% of Democratic primary voters say they want a candidate to focus on expanding opportunity to more people and places, compared to just over a third who would prefer a message centered on reducing income inequality. An opportunity message resonates with Democrats across American communities; 57% of voters in urban areas prefer it, as do 59% of those in the suburbs, 54% in small towns, and 63% in rural areas. 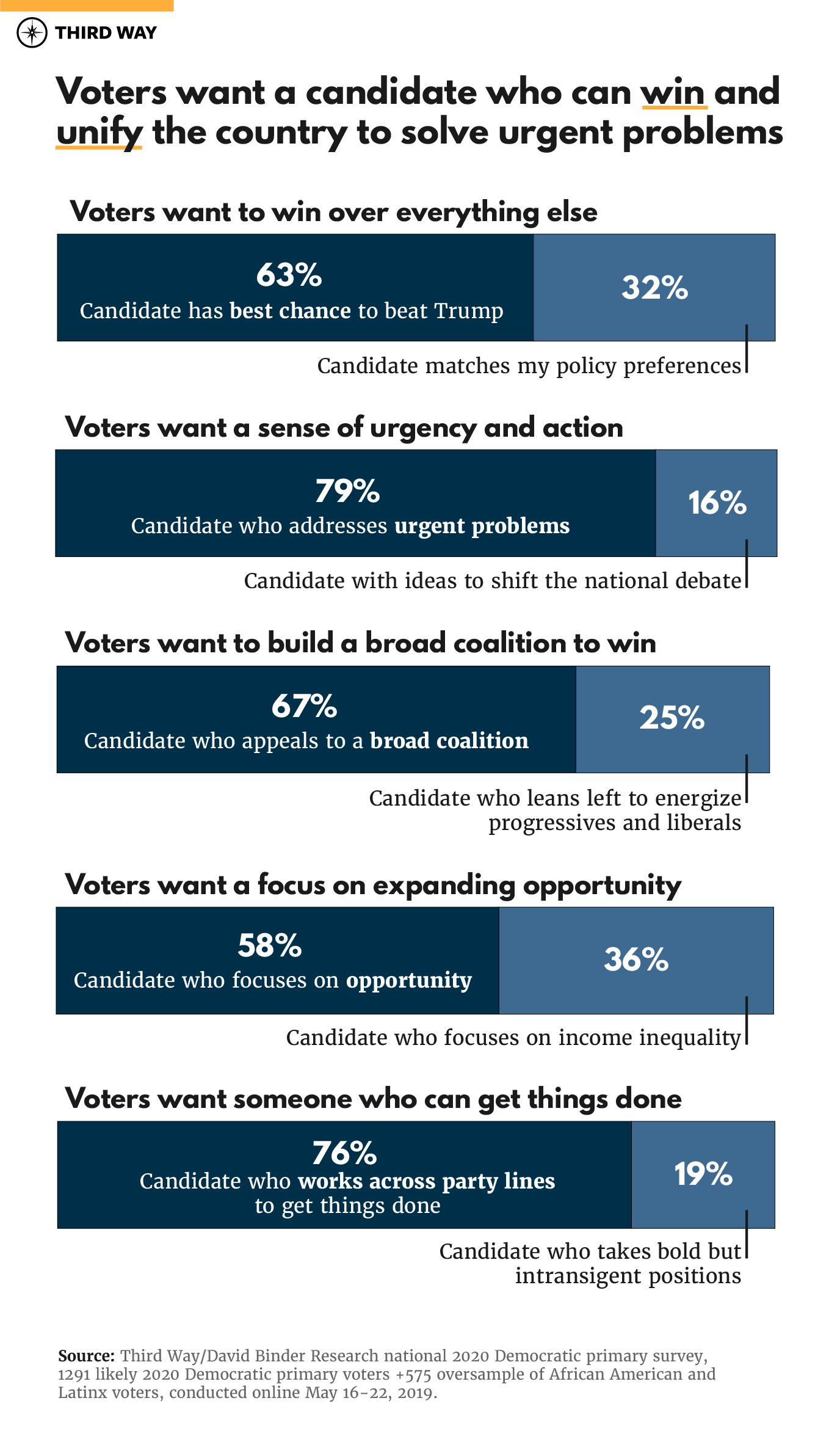 2. The hyper-engaged are following the race more closely, but they don’t reflect the primary electorate in either demographics or ideology.

Both campaigns and the media place a heavy focus on the Twitter conversation, yet only 12% of Democratic primary voters post on Twitter daily. These voters are the hyper-engaged. And there is a real divide between the hyper-engaged and the entire universe of primary voters who will decide the nominee and go on to provide the backbone of a winning coalition in the general election. If Democrats ignore this and fall victim to the funhouse effect once again, they’ll do harm to our chances of beating Trump in 2020.

While most primary voters haven’t yet tuned into a race where the first ballots won’t be cast for another seven months, the hyper-engaged are obsessed with the daily vicissitudes of this pre-pre-primary season. 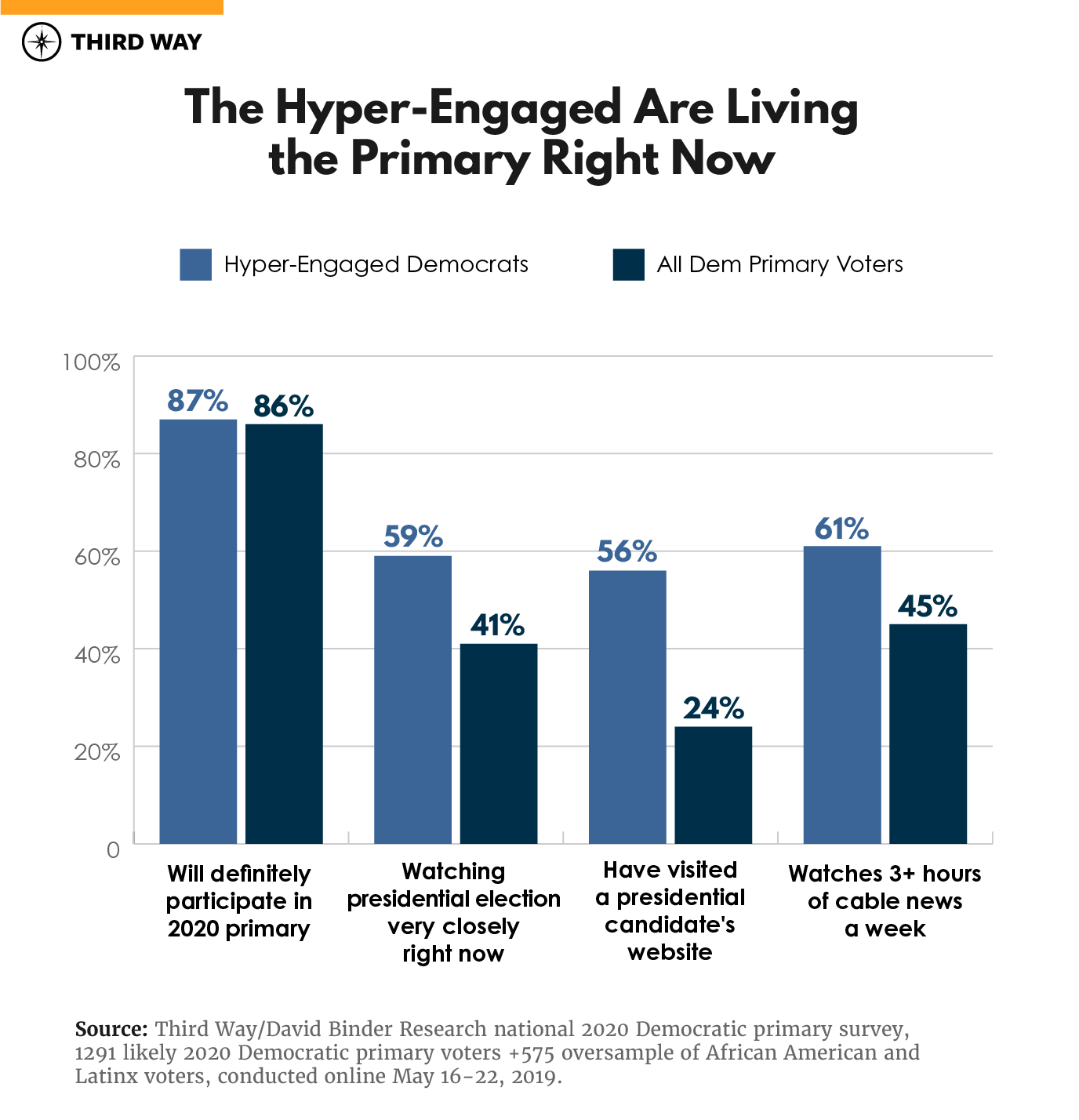 These hyper-engaged folks who are currently driving the debate have a distinct demographic makeup and lean further to the left.

The hyper-engaged are flooding the Twitter feeds of campaign staff, candidates, pundits, and the media. But we cannot forget that they are not representative of the vast majority of primary voters—let alone the coalition Democrats need to build to kick Trump out of the White House.

3. The hyper-engaged have a very different theory for how Democrats win in 2020.

The hyper-engaged differ from all Democratic primary voters not just in their essential makeup, but also on strategic matters like the best approach for 2020. 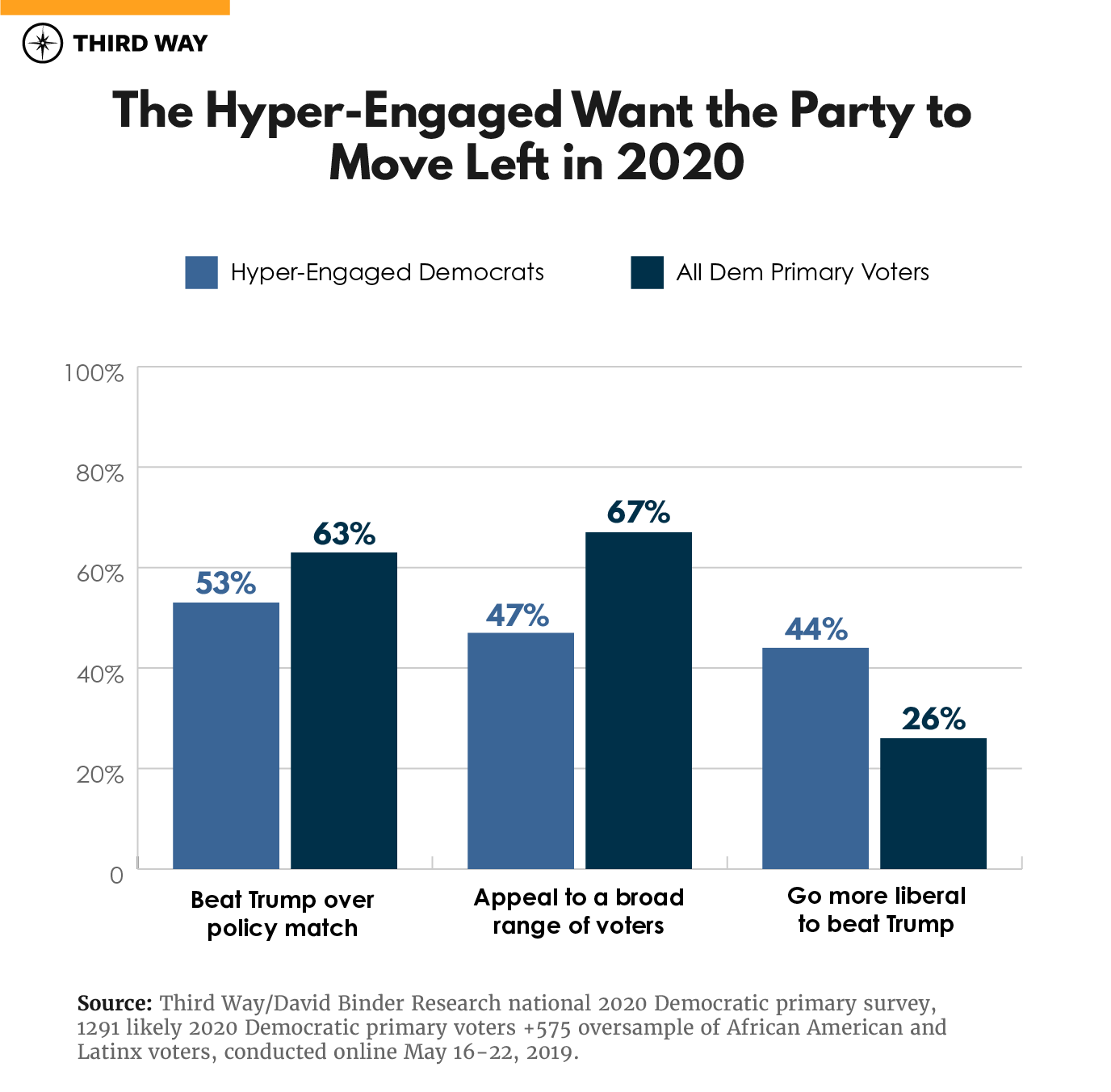 If candidates and campaigns fall for the funhouse effect and take strategic cues from the hyper-engaged, they risk orienting in a direction that does not track with most of the Democratic voters they need to woo.

4. The hyper-engaged have different priorities than primary voters.

The hyper-engaged also break from the rest of the party when it comes to priorities and the issues.

While all primary voters say unequal opportunity is a bigger problem than income inequality by a 49–39% margin, the hyper-engaged say inequality is the bigger challenge by a 61–33% spread. On social issues, primary voters across the board support progress, like an earned path to citizenship for those without legal status, but they balk at bumper sticker ideas like abolishing the Immigration and Customs Enforcement (ICE) agency—just 29% support that notion. By contrast, abolishing ICE is very popular with the hyper-engaged; a full 64% support this hashtagable idea.

In general, when asked what Democrats should focus on to beat Trump, the hyper-engaged are less concerned with the kitchen-table issues that affect peoples’ daily lives. We asked respondents to rank the top three issues they thought were key to winning back the White House, and a large plurality of all primary voters rank reducing the cost of health care at the top (43%). Yet this number drops to 24% among the hyper-engaged. The next most important issue to all primary voters, reducing taxes on the working and middle class, saw a similar enthusiasm gap of 11 points when narrowing in on the hyper-engaged. Conversely, the hyper-engaged are nine points more likely to list free college as a top issue and eight points more likely on a federal jobs guarantee. Worth noting, there is near-convergence on climate change; around 25% of both groups list it as a top issue. 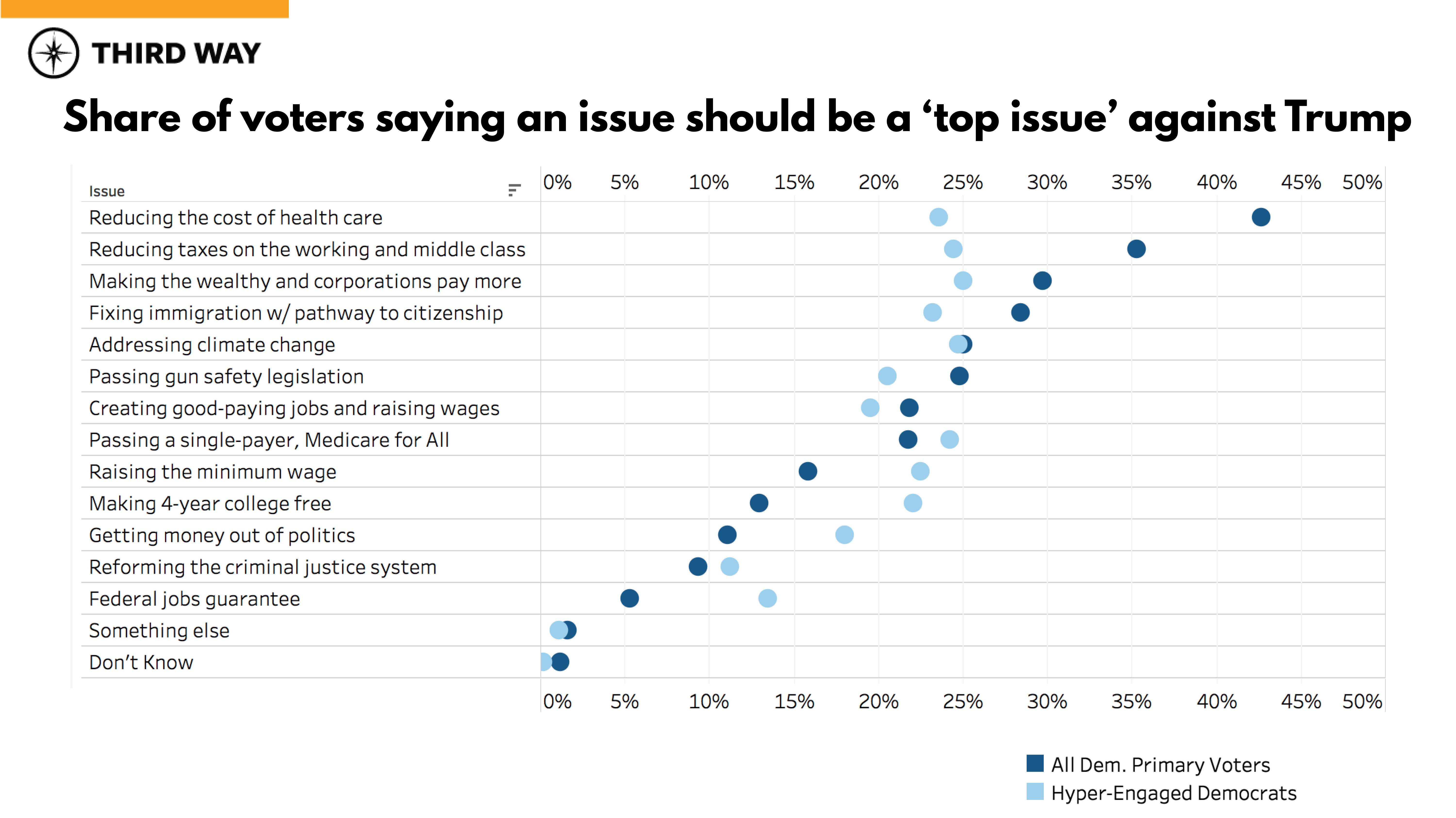 The calls to action on Twitter for proposals like Medicare for All, free college, and a federal jobs guarantee are siren songs. They’re perfect examples of the funhouse effect at work. It is crucial for Democrats to recognize that an idea’s popularity on Twitter is not an indication that it matters to most of the Democrats who will vote next year.

5. The funhouse effect is in full force when it comes to Medicare for All.

Health care was the defining issue in 2018, and it likely will be again in 2020. When it comes time for the general election, the fault line will be Democrats’ commitment to expanding affordable health care to more people versus Republicans’ efforts to take it away. But right now, Democrats are engaged in a debate about the best path to universal coverage. Part of this debate centers around Medicare for All, which Republicans used as a cudgel against the Democrats in 2018 who supported it—with the knowledge that it loses significant support as soon as voters hear the details. Like the general electorate, when primary voters learn about the specifics on Medicare for All, support drops sharply. But the hyper-engaged disregard these concerns and are immune to the erosion.

Both groups begin with strong support for Medicare for All when they just hear the name; all primary voters start at 65%, and the hyper-engaged start at 82%. But when provided additional details, support plummets with all primary voters.

Unlike both general election and primary voters, hyper-engaged, daily tweeting Democrats dismiss concerns about Medicare for All. Seven in ten still support it after hearing it eliminates private insurance, and support never goes below six in ten—even when picturing the prospect of Republicans having complete control over access to health care for women, immigrants, and LGBT people. 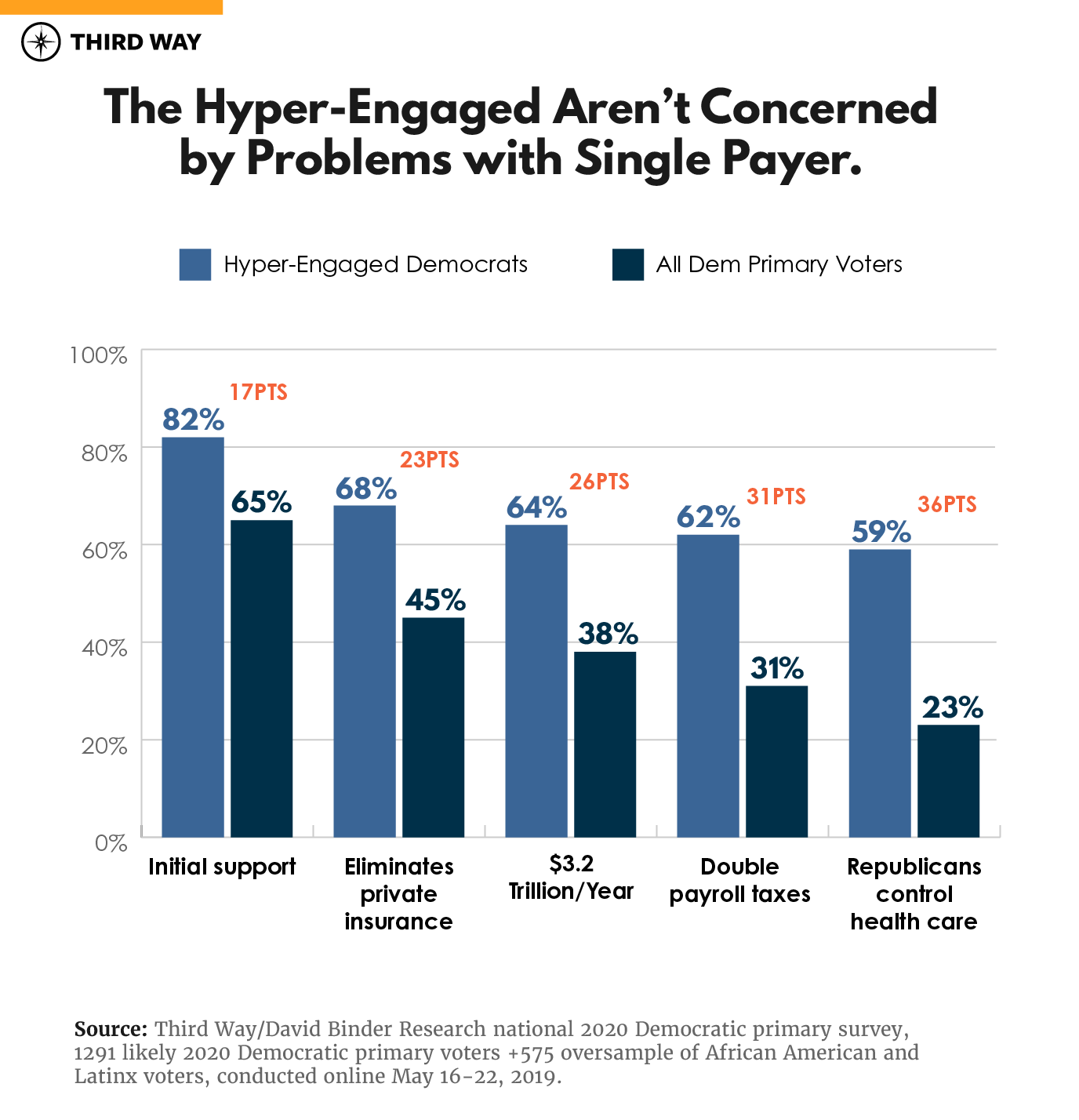 Initially, there is a 17-point gap in support for Medicare for All between all primary voters and the hyper-engaged. This gap expands to 36 points once all the concerns about the policy are raised. If Democrats fall victim to the funhouse effect on Medicare for All, they will be touting a proposal that is supported by fewer than one in four primary voters after all the facts come out.

Every person has their story about the morning after Election Day 2016. What tied these experiences together was a collective sense of shock. This shock was a product of the funhouse effect that had distorted our political realities for the preceding year. And it could happen all over again in the next 17 months—if we aren’t careful to inoculate ourselves to it. To do so, Democrats will need to look beyond the hyper-engaged on Twitter to align their campaigns with the vast majority of Democratic voters who are looking for a pragmatic progressive path forward to beat Trump.

These voters’ mandate is clear: they want a candidate who can win, someone who can build a broad coalition of support and address urgent problems, and someone who will focus on kitchen-table issues that would make a tangible difference in their daily lives. Relentlessly pursuing this mandate is how Democrats can shatter the funhouse mirror and deliver victory in 2020 and beyond.