Manufacturing the Future of Clean Energy with 48C

Faced with a sputtering economy and millions of Americans still out of work, Congress will be under pressure to deliver policy solutions that create jobs, spur private investment, and make the United States more competitive in a global economy rapidly shifting away from carbon-intensive energy. As lawmakers debate new ideas to accelerate America’s recovery, they should also consider reviving a stimulus tool with a strong record of success: the 48C advanced energy manufacturing tax credit program.

In 2009-10 and again in 2013, 48C provided a credit of up to 30% for investments in building new manufacturing facilities or expanding existing facilities to produce clean energy technologies. The 48C ITC supported a variety of end-products, from wind and solar to electric vehicles and their power systems, carbon capture and smart grid technologies, and renewable fuels. Applicants were judged based on several assessment criteria, including the projects’ potential to reduce emissions, create jobs, spur innovation, and begin operating quickly.

Companies want this kind of incentive to grow their business: The $2.3 billion in competitive 48C credits offered under the Recovery Act was initially oversubscribed by more than three to one. In the first phase of the credit, DOE fielded more than 590 applications and ultimately recommended that the Internal Revenue Service approve nearly 200 projects, representing more than 130 manufacturers, both large and small in size. Support from 48C helped manufacturers create new jobs and protect existing ones by enabling the companies to modernize and stay competitive amid an economic downturn and a rapidly evolving global energy market.

Today, top unions, environmental groups, and businesses want to see Congress enact policies like 48C that give a boost to our clean energy sector while protecting and increasing US manufacturing jobs. On Dec. 16, 2020, Third Way, the BlueGreen Alliance, and Environmental Defense Fund held a webinar discussing the potential for a revived 48C credit program to advance national priorities like job growth, economic stimulus, and emissions reduction:

48C Supports Communities Across the Country

48C protects and grows jobs in the clean energy sectors it targets, and it creates economic value in and around the facilities it supports. In fact, the first phase of the credit in 2009-10 was expected to generate about 58,000 direct and indirect jobs throughout the country.

We already know that manufacturing jobs have one of the highest job multiplier effects of any industry. And forthcoming modeling results from Third Way and Industrial Economics Inc. show that every $1 billion issued annually through a new 48C credit program could add $3.6 billion in GDP and roughly 8,000 direct jobs across the country. That employment number climbs to nearly 23,000 when you consider the indirect jobs created in the supply chain and the “induced jobs” supported in surrounding communities.

These estimates of widespread benefits are why Third Way has recommended that Congress revive and expand the 48C tax credit as part of a COVID-19 economic recovery package. Restoring 48C would once again incentivize businesses to grow their capacity to build clean energy technologies and get Americans back to work in good-paying, often union jobs. Given the previous success of 48C and the likelihood of a prolonged and challenging economic recovery, we have recommended a scaled-up program. Making at least $3 billion available in new 48C credits in each of the next five tax years would increase the number of manufacturers throughout the country that can benefit from the program and enable the United States to continue its global leadership as technologies emerge and evolve each year.

Much of the US clean energy industry is struggling during the COVID-19 recession and could benefit from incentives like 48C. A recent survey of clean energy businesses (including manufacturers and non-manufacturers) that Third Way conducted found that access to tax credits is a top priority for many of these companies, 46% of which are facing difficult decisions like layoffs or wage cuts if Congress fails to provide additional relief.

Part of 48C’s appeal amid the current recession is the significant geographic diversity of the potential applicant pool and, by extension, the communities who can benefit from the credit. We know through publicly available data that the credit supported projects in at least 43 states across the country, showing the widespread interest in and opportunity to benefit from 48C. Below is a map of 160 of the projects that were approved to receive 48C tax credits in 2009-10 and 2013.1 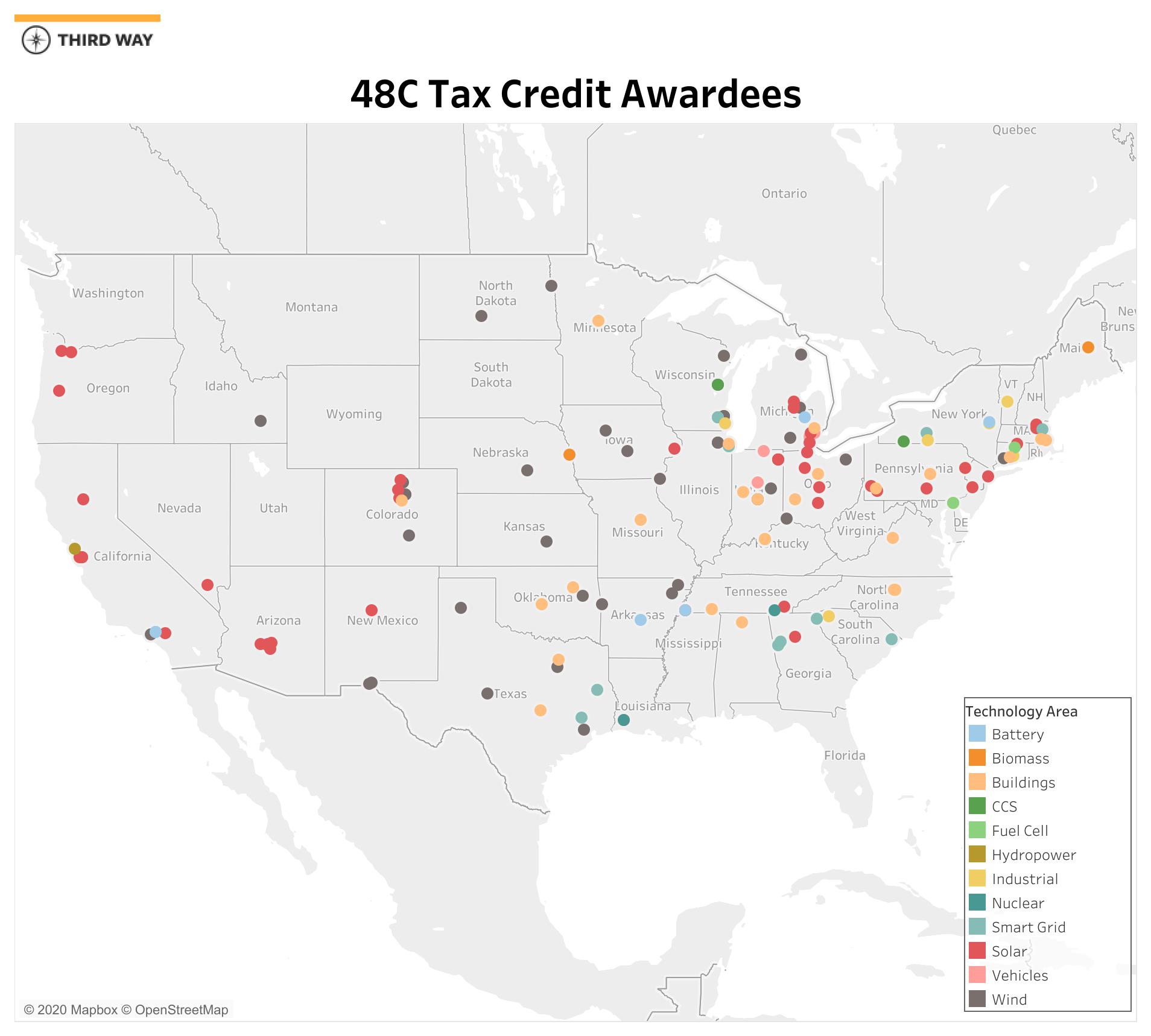 Mouse over any project to view the project applicant; amount of the tax credit requested; and a description of the project, as well as the reported location of the facility that was to be supported by the tax credit. In several instances, the IRS approved projects to receive credits within the same cities, which are viewable by zooming closely in toward the city. Approved projects are arranged by color based on their technology area.2

48C encouraged manufacturers to make investments to grow their production capacities across a swath of clean energy resources—a necessity if the United States is to bring to market the technologies that are in demand as countries increasingly gravitate toward lower-emitting forms of energy.

Policies like 48C also provide companies with an incentive to retain or build new manufacturing capacity here in the United States, rather than move abroad where labor and regulatory costs might superficially look more attractive. And by increasing the capacity or efficiency of manufacturing operations, 48C credits could ultimately help reduce the costs of clean energy resources, which is a win for consumers and a good way to accelerate the adoption of technologies that cut carbon pollution.

As JT Young, director of government relations at Ford Motor Co., said at the Dec. 16 event (embedded above), the 48C credit Ford obtained in 2013 “allowed us to transform a facility we have in Wayne, Michigan into the world’s first and most flexible electric vehicle manufacturing facility in the world at the time.” Thanks to the credit, Young said, the facility began to produce both hybrid and plug-in electric vehicles—a critical capability for auto companies, who need to produce many types of EVs to reach new consumers and popularize electric models.

Other manufacturers that already received 48C credits would be interested in applying again if Congress reinstates the program. In 2010, DuPont was approved for a 48C credit to expand production capacity of a polyvinyl fluoride film used in solar panels. “Energy markets are naturally very cost-competitive and it is critical that renewable energy sources are competitive with fossil fuel generation, so the use of the 48C credit was important to ensure that the project financials and economic viability of the future product sales could meet investment targets,” according to Rob Cockerill, global marketing and portfolio manager for DuPont Photovoltaic and Fluoromaterials. “DuPont is a strong supporter of local manufacturing in the United States and would be certain to take advantage of this or other similar programs to invest in future growth platforms when the opportunity arises.”

Lawmakers in both the House and Senate have already shown interest in bringing back 48C. In November 2019, Rep. Brendan Boyle (D-PA) introduced a bill that would provide $3 billion for each of five tax years in new 48C credits. And in the Dec. 16 webinar, Sen. Joe Manchin (D-WV) discussed legislation he is working on alongside Sen. Debbie Stabenow (D-MI) that would reinstate and expand the tax credit. 48C is exactly the kind of job-creating, economy-boosting, emissions-reducing policy tool that Congress should consider including in a future stimulus package.