We knew from our survey of clean energy businesses back in July that these companies were faced with layoffs, pay cuts, and even closure amid the COVID-19 crisis and ensuing recession.

Unfortunately, as the White House and Republican-majority Senate have slow-walked negotiations with Democrats on a new package of significant recovery and stimulus measures, these companies continue to find themselves in a dire position. Third Way’s second survey of clean energy businesses from a wide variety of sectors and US regions, conducted from October 12-30 with help from Clean Energy Business Network, finds that these companies still desperately require policy solutions to help them recover and start growing again.

Given the importance of this industry to meeting our emissions reduction goals, building more resilient infrastructure, providing millions of diverse jobs across the country, and bolstering American competitiveness in this growing global marketplace, it is imperative for Congress to enact policies to support clean energy businesses.

Five Key Takeaways from the Survey

1. Conditions Are Stagnating for 74% of Clean Energy Businesses

Regardless of sector or geographic footprint, businesses across this industry are hurting. Three out of four respondents indicated that Covid-19 has had a large or moderately negative impact on their business. This is nearly the same response we received during our last survey in July, signaling that economic conditions have not demonstrably improved since mid-summer. In fact, half of all respondents expect revenue/sales to decrease in Q4 2020, compared to Q4 2019. 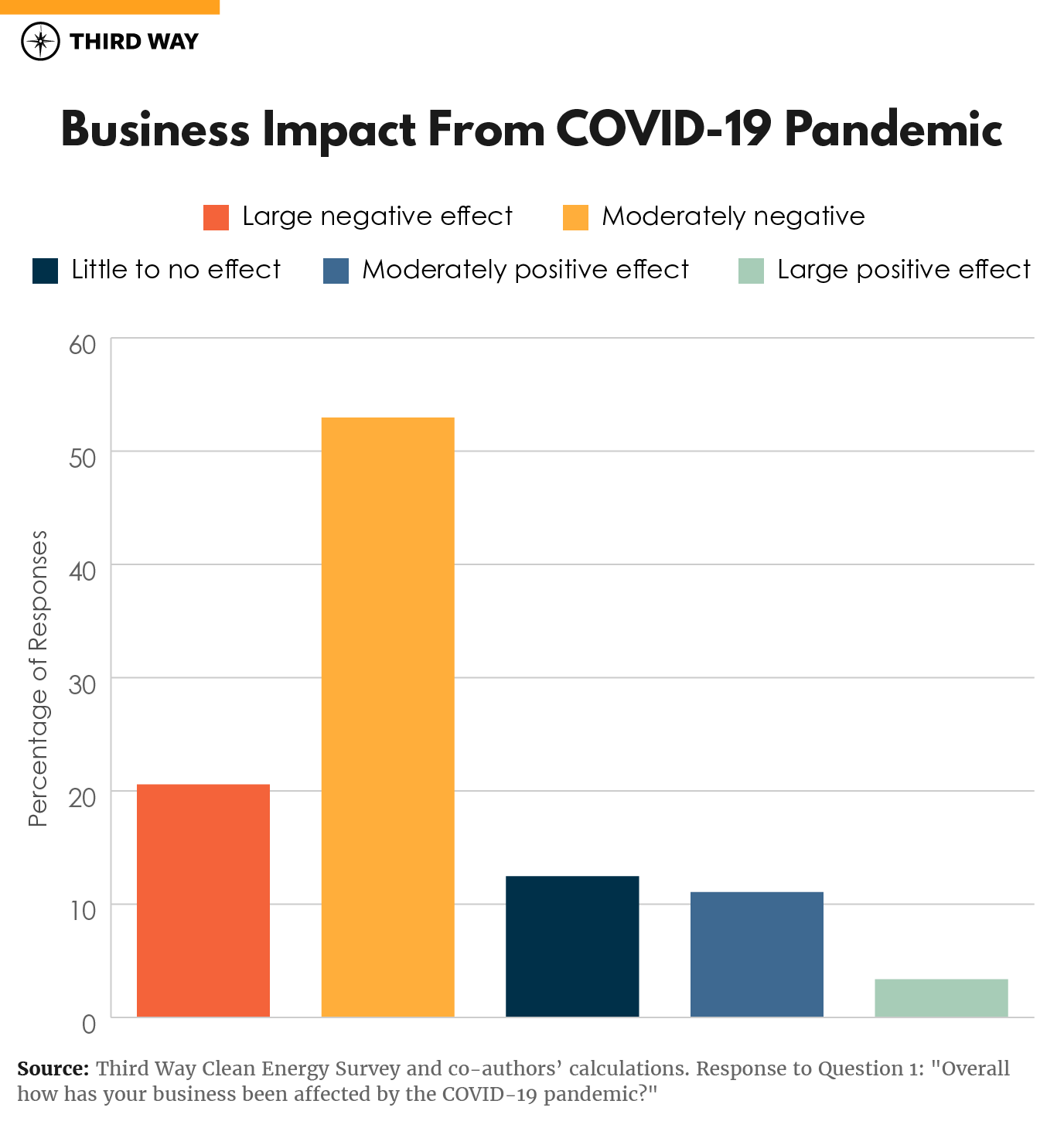 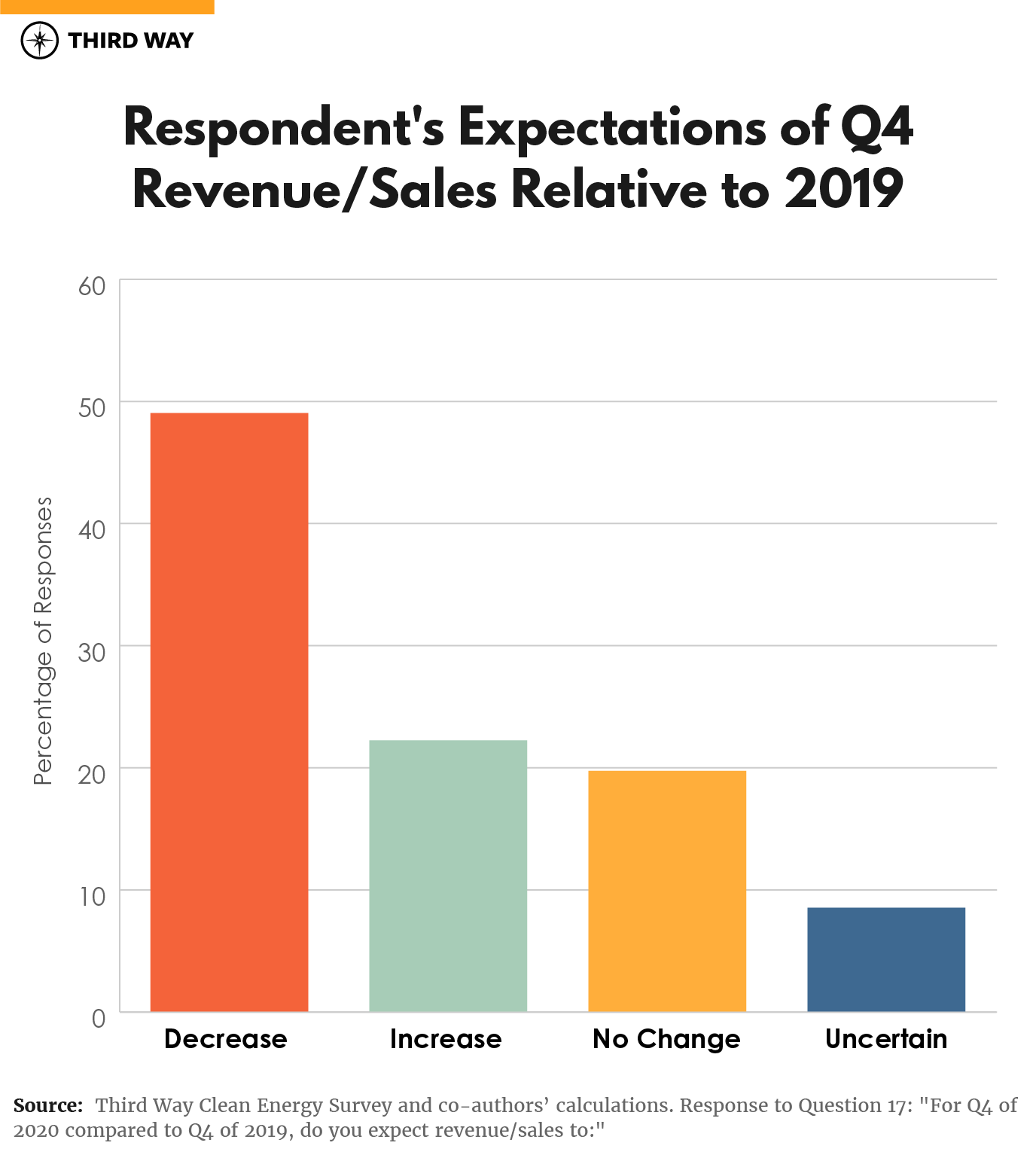 2. Clean Energy Workers Are Being Impacted

Given the stagnant or worsening economic challenges they expect to face, 46% of businesses surveyed said they will have to take action adversely affecting workers by the end of year, unless the federal government provides new Covid-19 relief measures. These actions include laying off workers, furloughing or reducing worker hours, reducing wages, or ceasing operations.

This could create a lasting drag on an industry that was among the fastest growing employers in the country, and that is vital to larger economic and climate goals. Workers that are separated from their jobs can face chronic challenges getting back into the labor force, and may require new workforce training or relocation assistance. Finding a new job at an equivalent wage may take months, if not years. For example, only half of the businesses surveyed had rehired any of their workers that were let go since the start of the pandemic. And among those companies, most brought back less than half of their laid-off workforce. 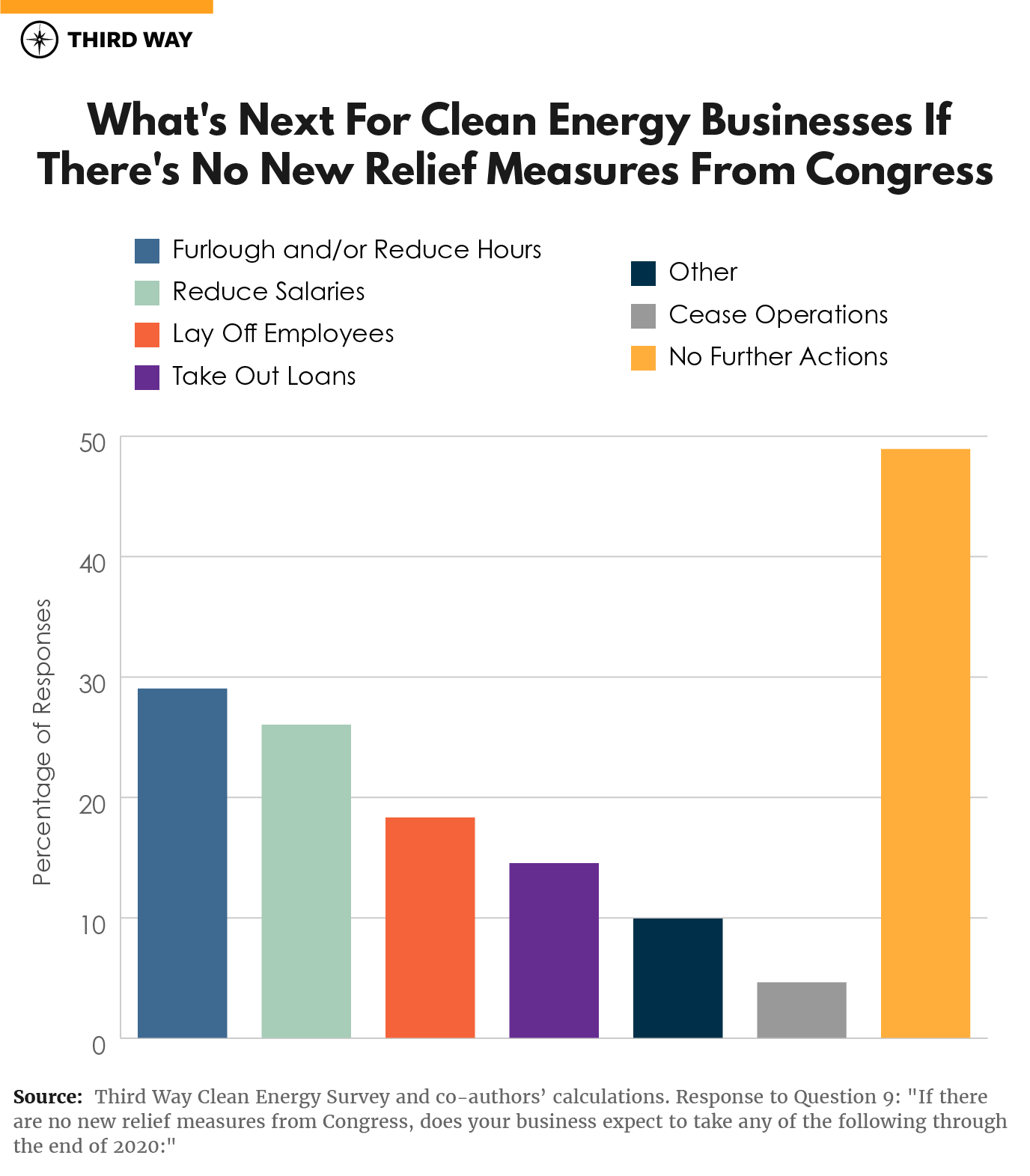 While not without its challenges, the Paycheck Protection Program (PPP), authorized under the CARES Act in March, substantially increased employment, financial health, and survival rates of small businesses during the Covid-19 lockdowns, according to a Brookings study. According to our survey responses, PPP provided significant assistance to clean energy businesses during the recession.

Businesses were provided low-interest loans to cover payroll expenses and given the opportunity to have those loans forgiven if they retained all employees. Fifty-five percent of survey respondents received PPP. Not only did PPP provide financial relief and flexibility, our survey found three out of four recipients applied for loan forgiveness, meaning they successfully retained employees throughout this time of great economic uncertainty. 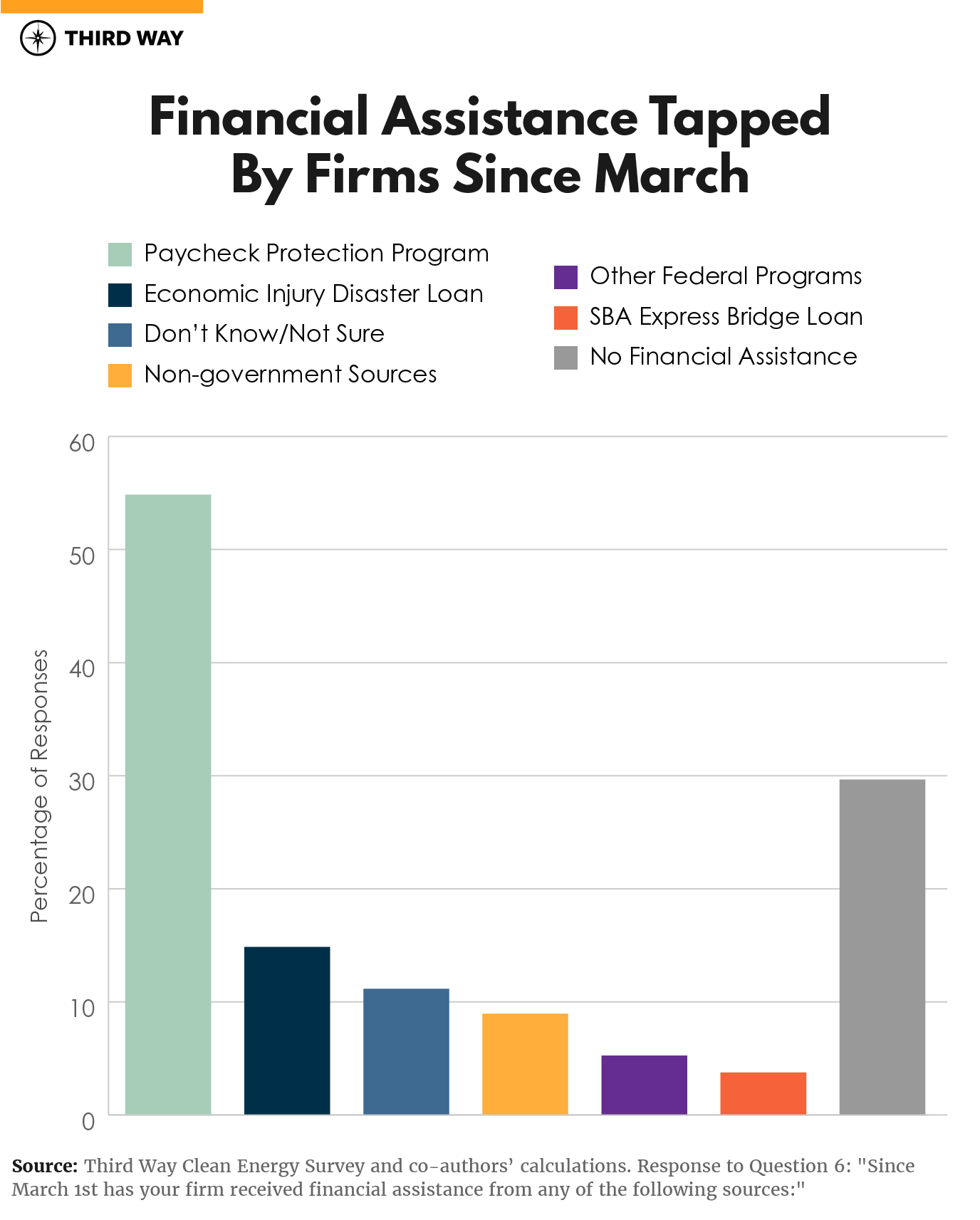 Reauthorizing PPP was under discussion in Congressional negotiations during the summer and early fall, though a deal was never reached. Even with unemployment more than double where it stood in February 2020, the prospect of such an extension in the near future is still highly uncertain. Congressional negotiations are still ongoing. Based on how high the participation rate was previously and the fact that anywhere from 48-78% of those surveyed would apply should the program be reauthorized, PPP or a similar lending program for small businesses should be included in future recovery packages. 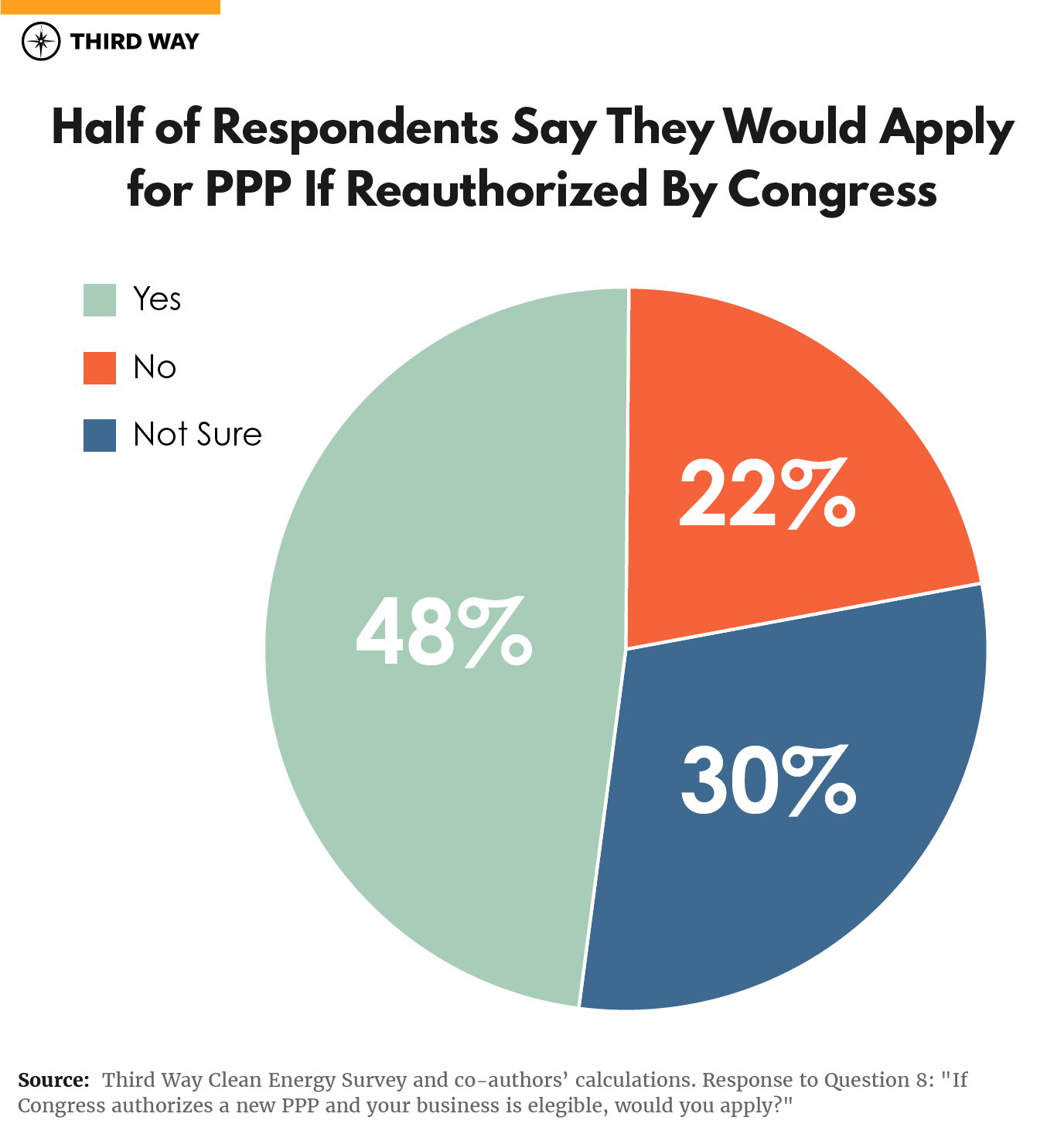 PPP is not the only way the government can help. We provided survey respondents with an extensive list of policies relevant to the clean energy industry and asked them to choose the three that would be most helpful to their business. Extending current clean energy tax credits and investing in public infrastructure were the top two responses by a sizable margin. Extending tax credits has been a major priority for the industry since the onset of the recession and was also cited as the top policy choice in our July survey. 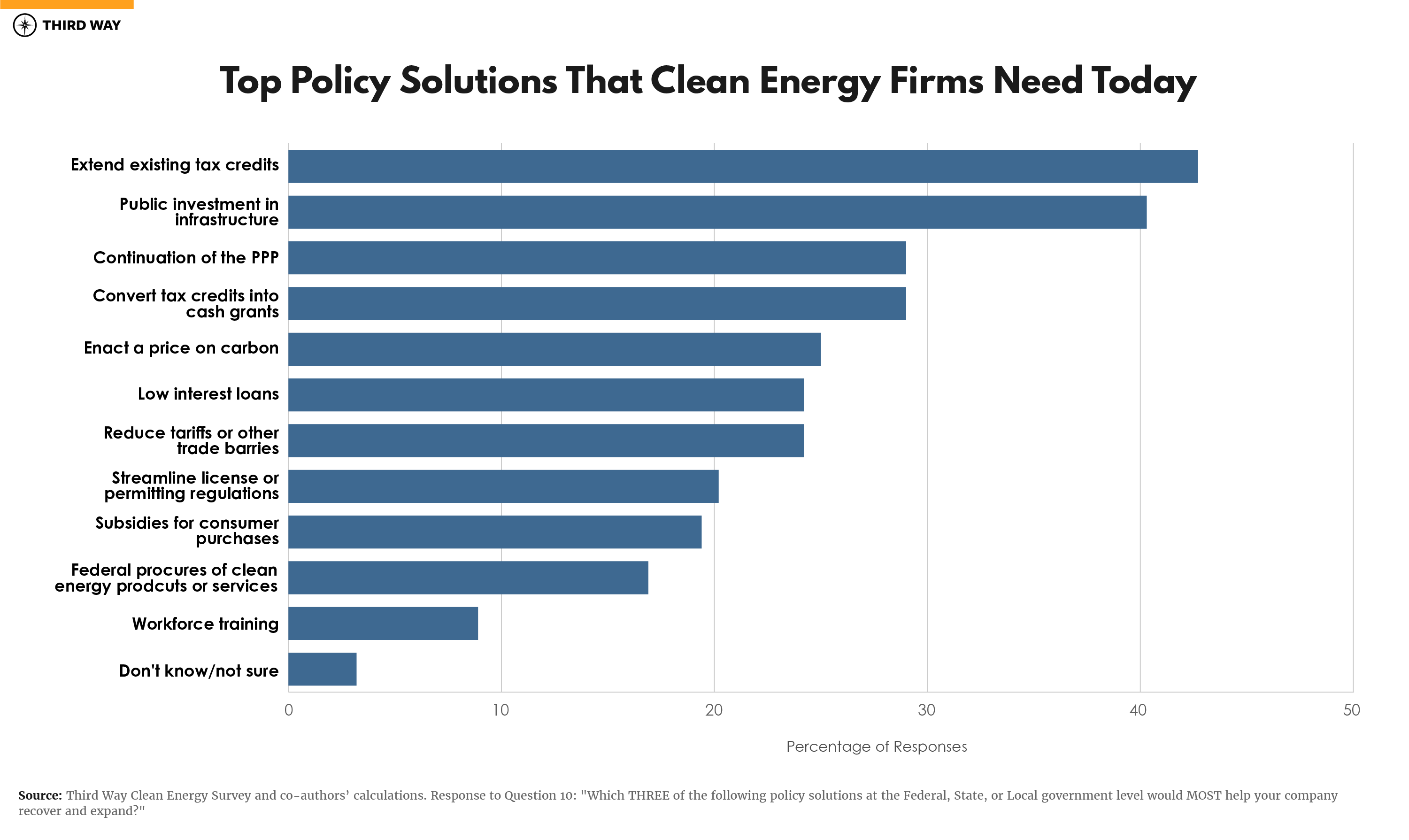 In our previous survey, investing in public infrastructure was the third most popular policy. But in the latest survey it is now essentially tied with extending tax credits for the top spot on the list. Both tax credit extension and investment in low carbon infrastructure have been focal points in the legislative agenda for House Democrats and in the Biden Climate Plan. Many prominent Republicans in Congress have also signaled that these kinds of initiatives could be areas of agreement between the parties.

In addition to the types of policies that would help clean energy businesses, we asked respondents about their levels of confidence in our elected officials to implement such policies. Confidence in the Trump Administration was dismal (26%), especially compared to the potential Biden Administration (61%), who respondents viewed as more likely to enact policies incentivizing climate and clean energy action. Given the outcome of the presidential election, they may have reason for hope.

However, confidence in congressional Republicans was roughly aligned with Trump (23%) and well below the figure for congressional Democrats (56%). With the GOP favored to retain control of the Senate and thereby holding significant influence over legislation to support the clean energy businesses, let’s hope they outperform the industry’s expectations. 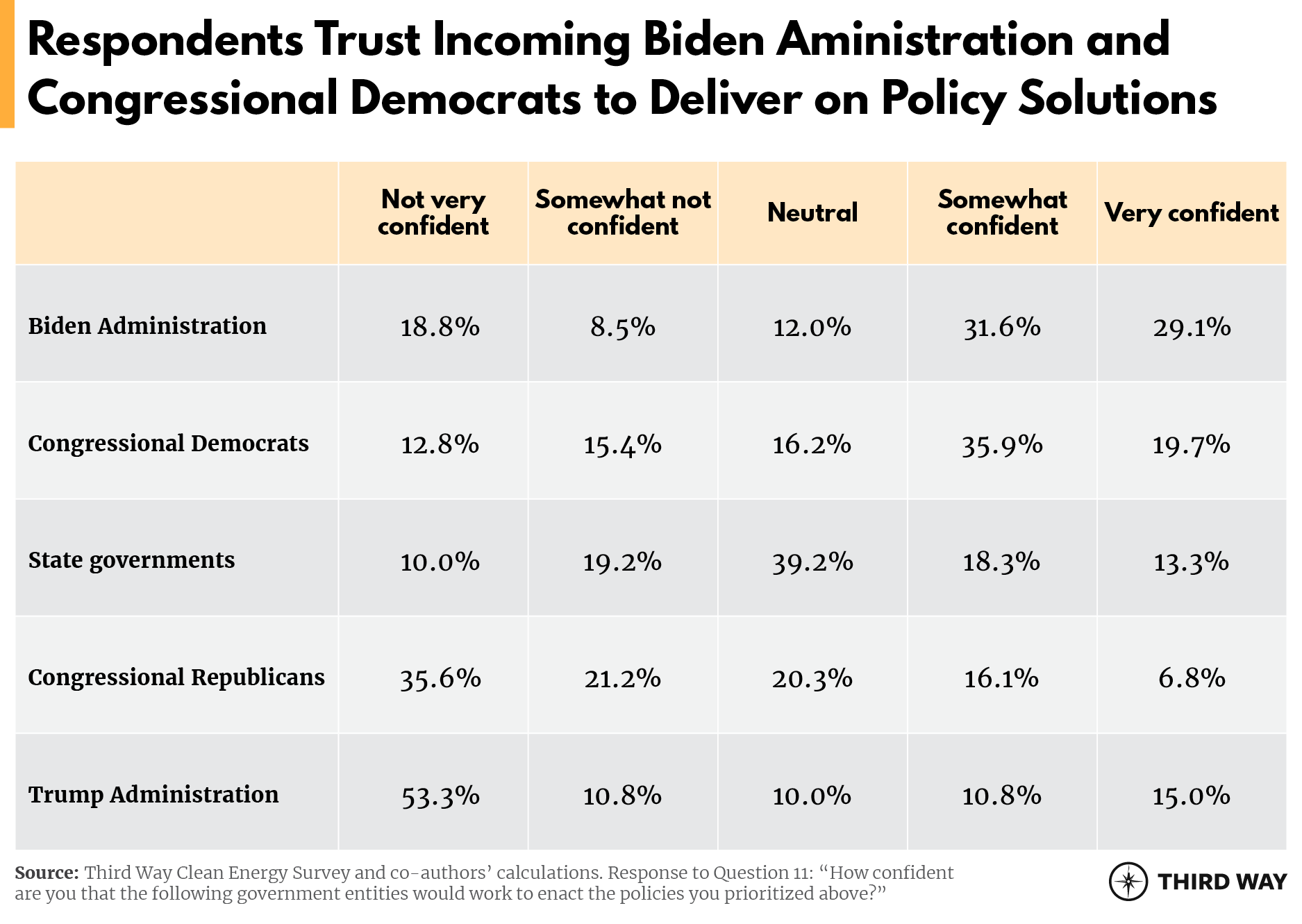 The success of clean energy businesses is imperative for protecting our environment and winning the fight against climate change, but it is also critical for reviving the national economy and jumpstarting growth and job creation in the near- and long-term.

If we take one thing away from this research, it should be that America’s already-struggling clean energy businesses are not out of the woods when it comes to this period of stagnation and complacency in Washington. In fact, many are anticipating even further losses that will hurt their employees and their bottom lines. As Congress continues negotiations for relief (and eventually stimulus) measures, it is imperative that they include policies that help clean energy businesses survive and quickly recover from this economic downturn, for the benefit of American workers and American competitiveness in a vital and growing industry.

As shown in the figure below, a wide variety of clean energy sectors are represented in our response data, with solar generation, battery storage and energy efficiency as our top three sectors. Respondents were geographically diverse as well, with every major region (as defined by the Census Regions and Divisions classifications) represented. 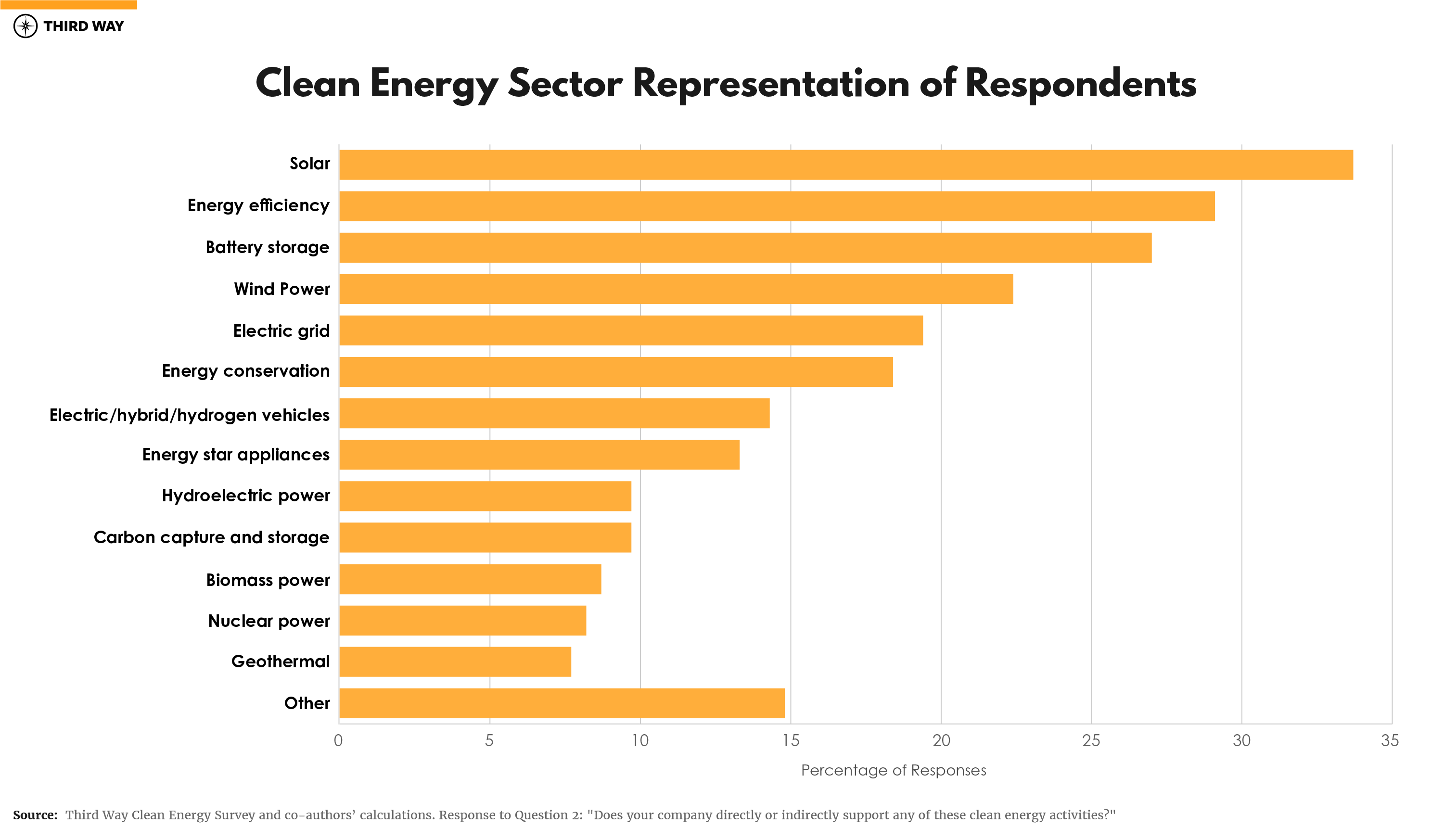 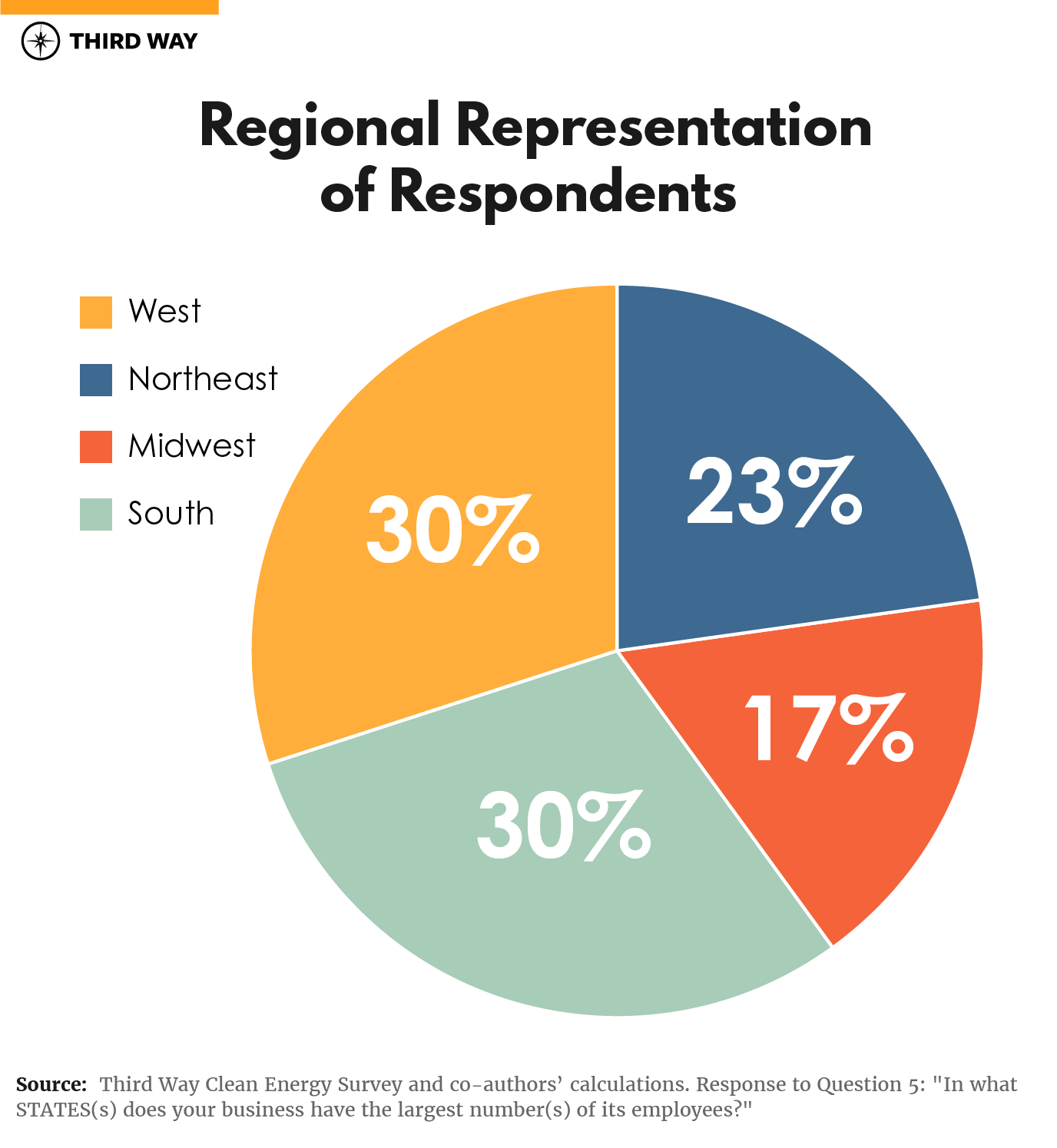 Third Way developed a 21-question survey asking for information about the impact of COVID-19 on clean energy businesses. The survey respondents included professionals who are employees at companies across a range of sectors. The questions asked for detail about the extent of the impact and actions that the businesses needed to implement in order to mitigate adverse effects. We also asked questions pertaining to any federal government assistance they tapped since March 1, 2020, as well as what policies they deemed helpful or effective, both today and into the future.

Responding businesses included many with which Third Way had existing relationships, as well as many others contacted through purchased clean energy business lists and collaborations with other nonprofit organizations. For example, the Clean Energy Business Network sent the survey to their members, independent of Third Way’s own outreach. We received 210 responses to the survey during the period from October 12 to October 30, 2020, 157 of which are part of the clean energy industry. See survey questions in Appendix 2 attachment.