If it wasn’t clear three months ago, it is clear now: the next global era will be defined by democracy versus autocracy. In this competition, a new and decisive divide pits America’s approach of “digital democracy” against China’s approach of “digital autocracy.” This great divide places the US and allies on one side and China's unfettered access to sensitive data on the other.

China’s digital authoritarianism has been described as "one giant QAnon" and is ubiquitous among the 1.4 billion inhabitants of the country. Moreover, one of the greatest threats to American national security interests is if China prevails in exporting and normalizing its model of digital supremacy. China’s global network of surveillance systems is antithetical to liberal democratic values, as it monitors, punishes, and conditions citizens, as well as influences them through automated disinformation campaigns. China’s ambition for global digital supremacy is real and supported by aggressive diplomatic efforts and massive financial investments.

The effort by the United States and like nations to maintain a peaceful and prosperous world order will require a level of sophistication and commitment unrivaled in our history. China is not only an adversary. It is sometimes a partner whose massive economy is deeply entwined with that of the US and other friendly nations. This is not the zero-sum game of the Cold War conflict, and the hope is that it never becomes so.

Will liberal democracies strengthen and proliferate or weaken and dwindle in the 21st century? The Chinese state intends to shape the global digital order in its image by redrawing technological norms and standards. Ultimately, the US-China national security competition may hinge on who sets the digital world order.

Third Way’s US-China Digital World Order Initiative will raise the alarm and develop the case that it is crucial for US national security to set the digital world order with our values and those of our allies instead of China’s. The competition between “digital democracy” and “digital autocracy” is a must-win fight. Free speech, privacy rights, truth, human rights, accountability, and other cherished values of free nations need to form the backbone of how nations are expected to govern cyberspace and apply increasingly powerful technologies. We will form a network of experts in surveillance, disinformation, and advanced technologies to collaborate and help find and amplify solutions. This network will strive to be bipartisan and to seek input from the public sector, private sector, academia, think tanks, foundations, and like-minded partners overseas.

This initiative will emulate the influence of Third Way’s groundbreaking nonpartisan Cyber Enforcement Initiative. The Cyber Enforcement Initiative showcased the effectiveness of Third Way’s network and model for outsized policy impact, with its ideas finding their way into the Biden Administration, President Biden’s Infrastructure Investment and Jobs Act, and the National Defense Reauthorization Act.1 A first of its kind, this bipartisan initiative will ensure the delicate balance of serving American interests and liberal democracy without jingoism, and be the standard for how a democratic digital world order is developed and exported around the world.

The Cold War competition between the US and the Soviet Union is analogous but vastly different than the 21st century US competition with China. Mark Twain is famously quoted “History Does Not Repeat Itself, But It Rhymes.”2 A superpower relationship now will be more complicated and fraught than in the 20th century, but lessons can be extrapolated to make the best policy decisions in this new area. These differences necessitate a new US approach and strategy for success, and it will spill over into digital supremacy competition. More fundamentally, the Soviet Union shared minimal economic and political interests so that damaging and undermining the Soviet Union was almost always in the US national interest.3 This is in stark contrast to the deep interdependence shared between the US and China in trade and investment, in addition to several mutual national security interests as well as combatting climate change.4 China’s maladroit endorsement of the Russian invasion of Ukraine will lead to some untethering of the US–China economic ties, but it is unrealistic to believe that the two largest world economies won’t remain interconnected.

The US-Soviet conflict was measured by superior traditional weapons and military power—but the decisive weapons of the US-China conflict will be exceptional cyber and information capabilities. The US and Soviet Union rarely engaged in direct open warfare but did frequently battle through consuming and costly kinetic proxy wars such as the Korean and the Vietnam wars (from the US perspective) and Afghanistan (from the Soviet perspective).5 With China, it is less likely there will be kinetic warfare operations even by proxy. Instead, the main battlefield will be through non-kinetic, hostile cyber and digital operations. Rather than spreading the economic model of communism to defeat capitalism, China is exporting its authoritarian digital world order which will include its surveillance state model that will weaken and defeat democratic states. 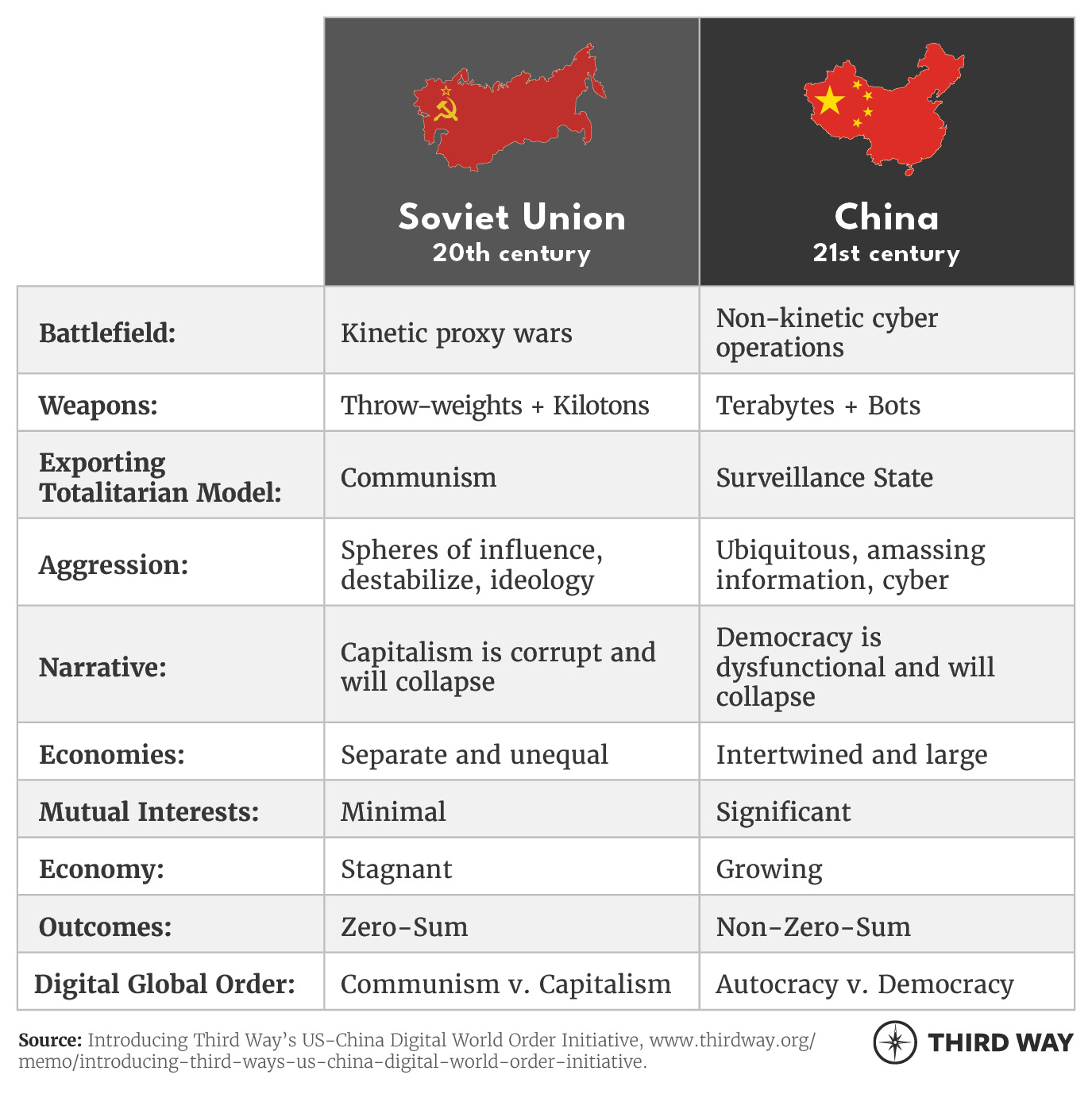 The US must champion a digital governance model built on core liberal democratic values that sets standards around the world. The US should lead a global effort to prioritize countering China’s ambition to set the digital world order in its authoritarian image—and take major actions as soon as possible. To prevail against China under a long-term peaceful coexistence, the US must once again ensure that its vision of “digital democracy” succeeds against “digital autocracy” in the global arena.

What is at Stake for the Free World

China is executing a detailed plan to become the world’s digital superpower. The US is not. As part of the state-driven “China Standards 2035” Project, the Chinese state intends to change the global digital order by redrawing technological norms and standards to outcompete the United States and dominate the free world with its authoritarian model for exportation.6 The outcome of this US-China competition will define the 21st century and have massive implications on US economic, geopolitical, and military strength.

China’s model will enable an information dark age across autocratic nations where whole societies live in a completely distorted version of the world. Current trends point to a stark divide between democratic countries with freedom of speech and press, and authoritarian states with sophisticated disinformation and censorship regimes. Through technologies like the Great Firewall, 1.4 billion people in China alone have already been systematically shunted into state-controlled narratives for understanding the world.7 China is perfecting its technology-enhanced authoritarianism for export, and dictators like Vladimir Putin are signing up to better hide horrific truths from their citizens.8

The Chinese government also conducts operations to serve their economic and geopolitical interests by spreading and strengthening Chinese technological authoritarianism.

The US government is recognizing the national security threat of China’s technological aspirations and cyber operations. In March 2021, the FCC recognized the risks of China’s digital control and designated several Chinese telecommunications firms, including Huawei, as national security threats to US government vendors and are restricted from conducting business with.15 The annual Office of the Director of National Intelligence’s threat assessment noted, “China presents the broadest, most active, and persistent cyber espionage threat to U.S. Government and private sector networks” and the Chinese government “will work to undercut U.S. influence, drive wedges between Washington and its partners, and foster some norms that favor its authoritarian system.”16

China’s military buildup strategy also relies on gaining and maintaining the upper-hand in the digital global order. In addition to a traditional military arms race, Xi Jinping has recognized the importance of integrating digital superiority in China’s armed forces. Xi has called for a highly “informatized” military capable of dominating all networks, and to establish next-generation “intelligentized” warfare capabilities using advanced technologies like AI and quantum computing. 17

Over the next several years, Third Way will push policymakers to establish a comprehensive strategy to secure a democratic digital world order for the 21st century. As we inaugurate this new initiative, Third Way will explore and develop concrete, actionable recommendations that can serve as a realistic roadmap for US leaders to execute. We will develop solutions tailored for legislation in collaboration with our organizational partners and members of Congress. We will establish a non-partisan Advisory Board comprised of leading experts and policymakers on these issues. We will increase public awareness to amplify broad-based political support for the necessary actions to protect US national security.