Follow the Taxpayer Dollars: How an Instructional Spending Screen Could Work in Higher Ed

The benefits of earning a college degree are numerous—including lower rates of unemployment, higher lifetime earnings, and greater economic mobility for graduates. However, too often our higher education system fails to produce these outcomes, as only 40% of students who start college don’t earn a degree and more than half owe more on their loans three years into repayment than when they left school.1 Yet to date, federal policy focuses almost entirely on getting students into college rather than through it with a quality degree. To get better outcomes for both students and taxpayers and incentivize schools not to just admit students but actually invest in their success, policymakers in both the Senate and House have proposed new frameworks that aim to hold institutions more accountable.2

Yet when we look more closely at outcomes like completion, loan repayment, and earnings, some institutions or programs that perform poorly are clearly doing so because of lack of resources—while others have plenty of money but make the conscious choice to spend it on marketing and advertising or executive compensation instead of truly serving their existing students. One recent analysis by The Century Foundation found that a large number of schools—especially online and for-profit schools—spend less than one-quarter of the tuition students pay on actually teaching them.3 But research has shown that these choices can impact whether a student completes a degree.4

Focusing on institutions’ spending choices allows policymakers to apply a sector neutral approach to federal accountability conversations, judging institutions by the choices they make when it comes to serving students and not by their governance. An accountability framework that takes into account this key distinction about a schools’ financial priorities in conjunction with its performance on key student success outcomes could help the federal government provide support to institutions that need additional capacity and will use it in a good faith effort to improve the lives of their students—and prevent the flow of taxpayer dollars to institutions that won’t. Lawmakers on both sides of the aisle recently recognized the importance of looking more carefully at instructional spending as an important marker of an institution’s priorities, as an amendment to identify which costs are related to non-instructional spending at institutions that have raised their tuition recently passed unanimously in the markup of the College Affordability Act—the House’s reboot of the Higher Education Act (HEA).

To understand how a two-tiered system like this could look, we analyzed one proposal published by Senator Chris Murphy (D-CT) earlier this year. Senator Murphy’s framework sets clear bottom lines around completion and value to identify the institutions that currently fail to make students better off. Because these bottom lines are set to catch schools performing well below the average, the vast majority of institutions will pass these thresholds, and hence, end their journey through the accountability framework at this stage. That means most schools would never need to get to the second tier of examination, and the federal government would assume that if they are getting good outcomes for their students, it need not look further into how they are spending students’ and taxpayers’ money. However, institutions that do fail to meet certain thresholds around completion or value (which by a back-of-the envelope calculation based on the completion threshold in the Murphy proposal would be less than 5% of all institutions) will then be examined through an “instructional spending screen,” which compares an institution’s tuition per full-time equivalent student (FTE) to its spending on instruction per FTE.5 In essence, this screen asks how much of every tuition dollar is actually going toward teaching a student. If a school is performing poorly but spending most of its money on students, the school would qualify for additional resources. If a school is performing poorly AND not spending tuition money to actually teach the students that are already paying its bills, the Murphy proposal would say the federal government should no longer encourage students to use taxpayer funded grants and take out loans to go there.6 This framework recognizes the choices that institutions make when deciding how to spend their dollars and makes distinctions between those institutions who choose to spend on students’ instruction and those who don’t.

The flow chart and three case studies below demonstrate exactly how this kind of multi-layered framework would be applied to institutions. First, the Secretary of the Department of Education (Department) would determine which schools pass or fail the value and/or completion metrics. Institutions only need to fail one metric to be subject to the spending screen. Once the spending screen is applied, the poor-performing institutions are split into two groups: Group 1—or those that spend less than one-third of every tuition dollar on instruction, and Group 2—or those that spend one-third or more on instruction. Based on where institutions fall on that instructional spending screen, they will either face a series of consequences or be given additional capacity and time to improve their outcomes. For example, institutions that fail on outcomes and the instructional spending screen may face consequences such as having to publicly post their outcomes on the Free Application for Federal Student Aid (FAFSA) and the Department’s College Scorecard website, place a prominent warning on their own website and application, or the ultimate sanction if the institution fails to improve: the inability to access federal financial aid. Alternatively, institutions that pass the instructional screen will need to conduct a data analysis to better understand the drivers of their poor outcomes, while simultaneously receiving additional financial support to implement an improvement plan. Ultimately, after being given time and resources to improve, schools that continue to produce poor outcomes for students over time could face a significant governance change and/or the loss of Title IV financial aid. Yet if schools in either Group 1 or Group 2 improve their success metrics, they will move back into the “passing” category with the majority of their peers who never made it to the spending screen in the first place. 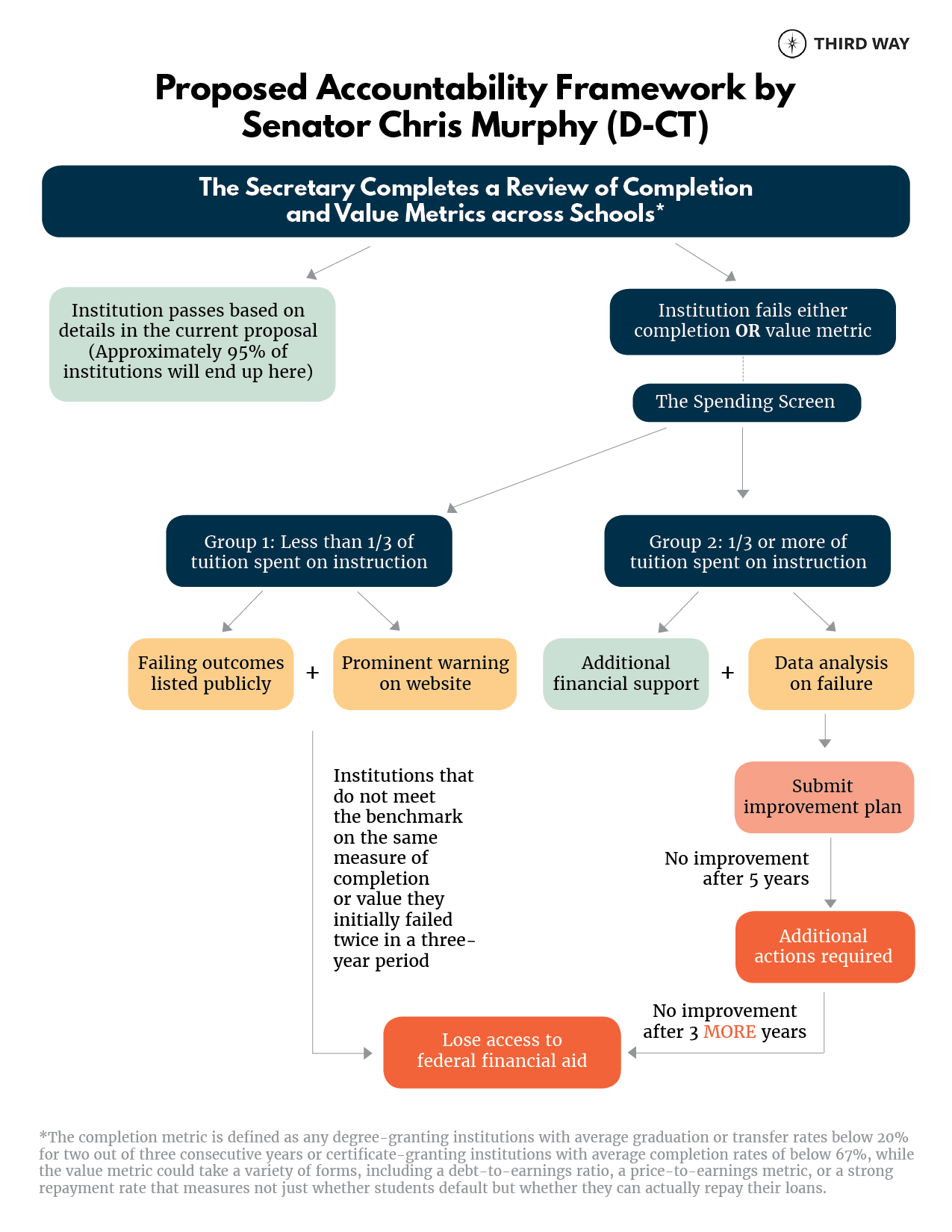 To crystallize this concept even further, the charts below depict how an institution, the fictitious “Sample University (SU),” could move through the accountability system based on whether it fails or passes the initial baseline metrics and/or the instructional spending screen. In the first scenario, we see that the institution graduates 45% of students and students are getting a return on investment, meaning the institution passes the success thresholds and is not subject to the spending screen. In the second scenario, SU only graduates 10% of its students, causing it to fail the completion metric and land in the instructional spending screen. At that point, it is determined that the school spends less than one-third of tuition on instruction. As a result, SU suffers the consequences and has its failing outcomes posted on the FAFSA and College Scorecard, as well as having to post a prominent warning on its own website and on its application. Unfortunately, if SU fails the metric two additional times over the next three years, it will result in the school no longer being eligible for federal financial aid. In the third and final scenario, SU once again fails the completion metric because it graduates 18% of students. However, this time, it’s determined that the school spends two-thirds of every tuition dollar on instruction, making it qualify for additional financial support to conduct a data analysis and implement a plan to improve student success. Unfortunately, if after submitting a data analysis and plan to the Department, it is once again determined that there has been no improvement in the school’s outcomes after five years, additional action will be required. If after working for three more years on its improvement plan, SU improves its student outcomes, the institution will be allowed to maintain its access to federal financial aid. 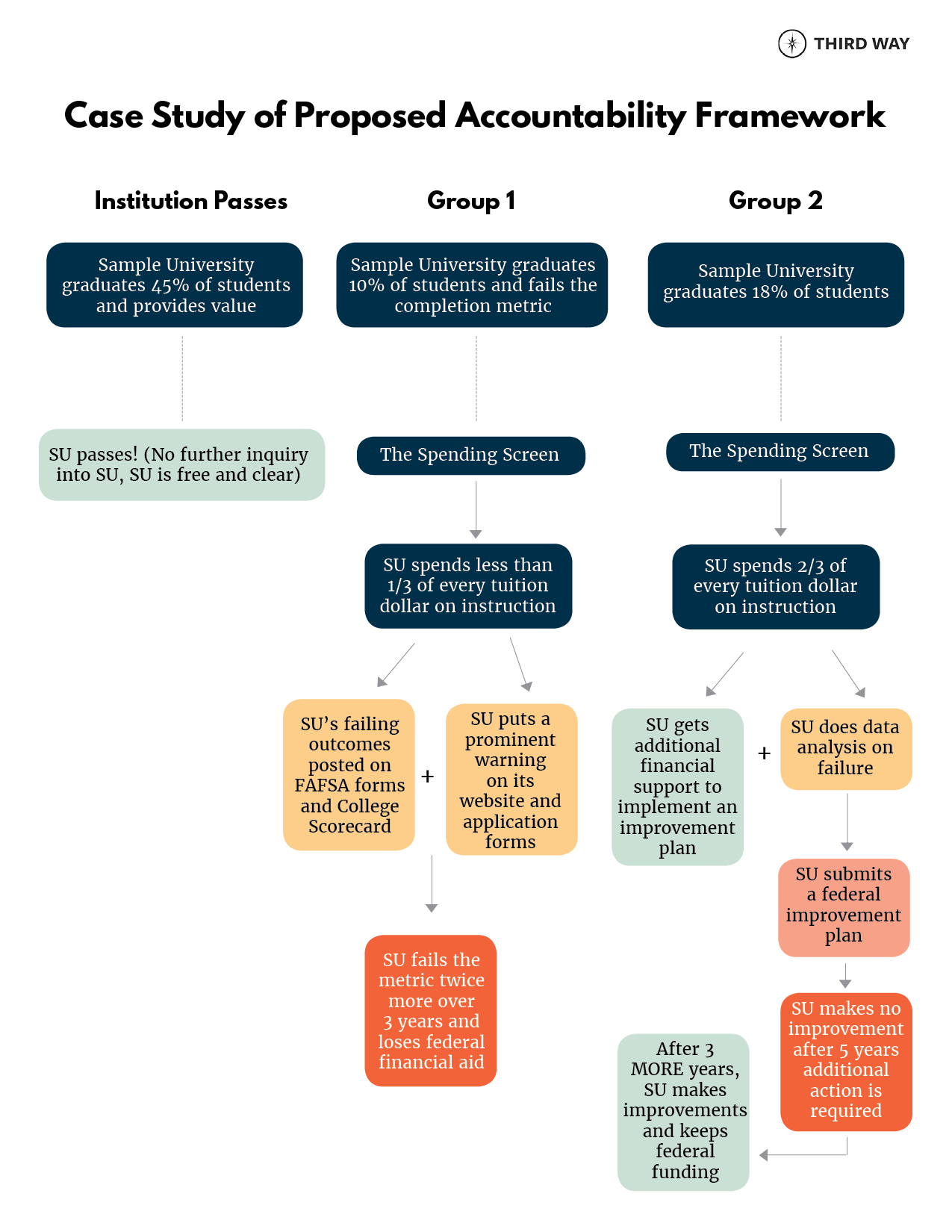 As Senator Murphy states in the release of his white paper, “institutions make choices every day, and those decisions make a huge difference when it comes to whether students access and complete higher education.”[7] This framework and a similar one proposed by the House provide ways to acknowledge those choices and meaningfully differentiate between institutions beyond their governance structure in order to apply the appropriate federal carrots and sticks that will incentivize institutions to make better decisions or close down those who won’t. We know that any accountability framework that factors in student outcomes and institutional choice is crucial to making sure students and taxpayers receive a return on their higher education investment. Including an accountability framework that recognizes the spending decisions institutions make—and how that impacts student outcomes on the ground—as part of the next reauthorization of HEA will create stronger guardrails and ensure that institutions are being held accountable when students can’t complete or don’t receive the value they paid for. Students deserve to attend institutions that are committed to their success and recognizing both the good and bad choices institutions make when serving students represents one bold step Congress can take to provide students with the best chance of succeeding in higher education and beyond.