Using Instructional Spending to Test for Value in Higher Ed

As Congress approaches the reauthorization of the Higher Education Act (HEA), policymakers and advocates have recognized there is a quality problem in our higher ed system which federal policy has long ignored: many taxpayer-funded institutions don’t provide students a real return on their investment. For example, there are 127 federally-funded institutions of higher education where fewer than 1 in 5 students who enter graduate eight years later.1 (And that’s using a generous graduation rate that excludes students who transferred out of an institution.) At nearly 1,500 institutions, fewer than half of students earn more than the average high school graduate eight years after they enrolled.2 It is imperative that Congress reforms federal policy to force institutions to be more accountable for the outcomes of the students they enroll. But if this next version of HEA includes greater accountability, we must not only anticipate unintended consequences of that shift, but proactively work to prevent them. Every school should be held to basic standards including whether they are providing value to their students or leaving them worse off, but it is critical to recognize that not all institutions of higher ed are similarly situated when it comes to their focus on student success.

While two schools might have similarly bad outcomes, the prescription might need to differ based on whether that institution has the existing resources and capacity to serve their enrolled students well. That’s why policymakers should consider examining how an institution is spending the money they do have. Because it is critical that if we raise the bar for the return on investment an institution must provide to students and taxpayers, we also distinguish between the schools that may be trying but can’t improve and the schools that just won’t.

Poor student outcomes exist across every type of institution in our higher education system.

There’s a quality problem in the American higher education system: we send more than $120 billion in taxpayer dollars to institutions every year, and far too many do a poor job of equipping students to get a degree, earn a good wage, and repay their loans. Recent data shows that only 37% of students who enrolled in higher education in the 2009-2010 academic year graduated from the same institution even after eight years.3 And as mentioned previously, there are nearly 130 institutions where fewer than 20 percent of students graduate within eight years.4 This is a problem that plagues all types of institutions, no matter the sector or predominant degree, as shown in the table below. 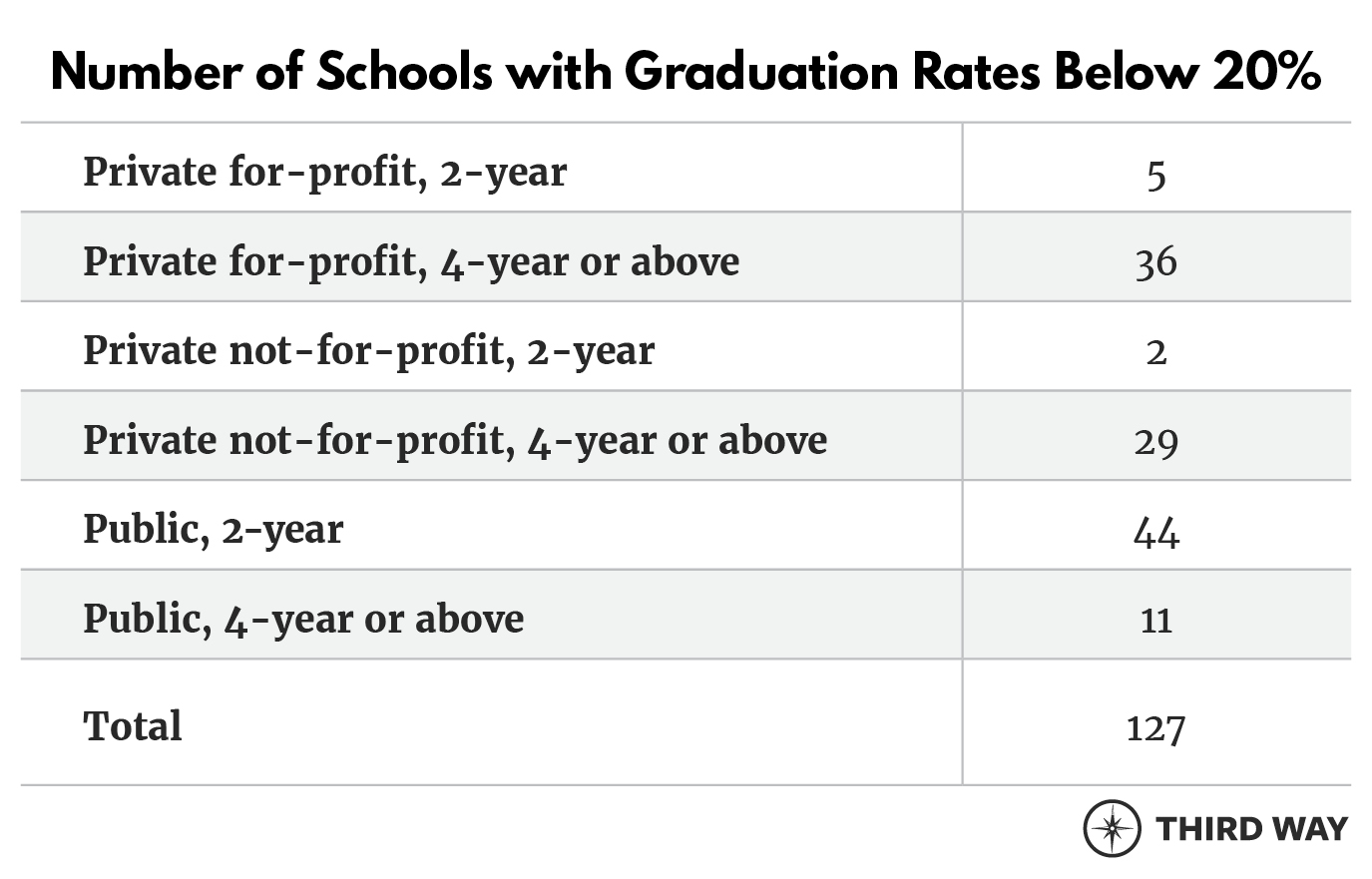 And these dismal outcomes look similar when across other measures like repayment rates or earnings, with schools of all sectors and levels leaving large portions of their students unable to pay down their loans. Recent data shows that 17% of four-year institutions leave students not able to out-earn the average high school graduate six years after enrolling.5 Right now, the federal investment in higher education is a blank check to these institutions—asking nothing in return. That’s why policymakers must put in place better guardrails to hold institutions accountable for these outcomes, and to protect students and taxpayers from schools that leave most of those who enroll with debt and no degree, or a degree that fails to yield sufficient earnings to repay their loans.

Institutions have differing levels of resources that can greatly impact their ability to improve student outcomes.

While some institutions have been taking advantage of the federal blank check and choosing to invest that money in things that don’t actually help their students, some are seriously under-resourced. Schools like community colleges or Minority Serving Institutions have faced historical disadvantages when it comes to funding at every level, and often they are open-access schools that accept every student—even those who might need additional support. For example, a historically black college with little or no endowment—and significantly less state funding than an R1, elite research institution—might enroll a student body that has been long underserved, with academic challenges driven by inequities in our K-12 system and resource constraints exacerbated by pervasive discrimination and persistent wealth gaps by race, as well as other systemic challenges. And because federal higher education financing is primarily a voucher system where grants and loans follow students to pay tuition and other costs wherever they choose, without regard for that institution’s existing resources, existing policy does little to ensure that these under-resourced institutions that are serving a public good are equipped with sufficient funding to serve their students in the way they need in order to succeed.

Institutions make different choices when spending their resources, which impacts their students’ outcomes.

While institutions have different levels of resources at their disposal, they also make choices on how to spend those resources every day. They can spend their money to recruit students, to teach them, to provide support services that will help them succeed, to offer grants to incoming students to defray the cost of college, to compensate administrators and school leaders, or even to provide returns to shareholders (in the case of for-profit institutions). Not all of these expenses accrue to the benefit of students, and schools vary significantly in how they divvy up their funds. Currently, it’s difficult for a student to even know how a school is really spending their tuition check—not to mention for a policymaker to incentivize a school to invest a federal Pell grant in a way that provides the best value to the low-income student it is intended to support.

Some schools who have fewer resources may have poor outcomes, though they are doing their best—or close to it—to help their students succeed. Yet this should not serve as an excuse to exempt those schools from guardrails that would ensure they aren’t leaving students worse off than if they’d never enrolled, as good intentions won’t help a student who is left degreeless, in debt, and at risk of default. As Congress considers proposals to increase institutional accountability for outcomes, it should avoid large scale carve-outs and instead consider using a “resource test” to tailor penalties or consequences to apply differently to the institutions who choose not to work to improve their student outcomes and those who are struggling to improve those outcomes but can’t due to a lack of resources and other historical and systemic inequities. To craft an appropriate screen to differentiate those distinct circumstances, policymakers could look at how much a school actually spends on educating students compared to the resources it has at its disposal.

Right now, institutions already report their instructional expenses to the Integrated Postsecondary Educational Data System (IPEDS) Finance Survey. Although the next HEA could give us even better data on school spending, existing federal data already enables policymakers to look at a ratio that measures “Expenditures on Instruction per Full-time Equivalent (FTE)” compared to “Net Tuition per FTE.” Essentially this would calculate the proportion of every dollar of tuition a school takes in per student that it then spends on instructing that student. This includes the salaries of faculty to teach students for credit and non-credit courses, adult or remedial education, or even to pay faculty or staff to tutor students. If the ratio is above 100%, that means the school is using other revenue to pay for instruction—or to keep tuition low. This provides a simple measurement to determine whether a school is making responsible spending choices when it comes to improving student outcomes. This test could serve as a proxy to show that a school that may not have many resources is nevertheless spending a significant percentage of its revenue from tuition towards instructional costs, demonstrating a commitment to student success. This responsible use of taxpayer dollars might earn a poor-performing school that fails to clear new accountability guardrails a chance to gain capacity-building funds and some time to improve their student outcomes. And for schools that are poor performing that are spending very little of the tuition revenue they receive on the students they are supposed to be serving, they would no longer be eligible for federal grants and loans. Because if we want to make sure students and taxpayers are getting a return on their investment, it is reasonable to expect institutions to spend a certain percentage of tuition dollars towards actually educating their students.

Spending on instruction isn’t the only factor that matters to improving student outcomes.

Spending on some areas outside of instruction is definitely important and can play a major role in student success. Because instruction isn’t the only important measure of an institution’s investment in students, it would be ideal to also consider genuine student supports as part of a spending ratio that is testing for value. Unfortunately, the current category for “student support” in IPEDS includes things like advertising and marketing, because it may be classified as an admission expenditure under the existing rules. These data problems could be remedied in a future HEA. However, even the existing data provides a simple measurement that clearly differentiates schools and provides a general understanding of whether an institution is at least trying to spend their money towards educating students. Because it isn’t all-encompassing, any policy using this ratio could create an appeals process. If a school’s spending on instruction were deemed inadequate, it could be required to provide the Department of Education with an audit that shows how its money is spent. If the Department determines the schools is indeed using its resources in a responsible way that is targeted toward serving students, it could get a reprieve from being cut off from federal grants and loans.

The data in the IPEDS survey is certainly imperfect and has serious limitations. As mentioned above, the categories are not disaggregated enough to understand how exactly schools spend their money line by line. Other variables also complicate the picture. For example, both tuition and instructional expenditures include graduate students, while some outcome measures like graduation rates are only a measurement of undergraduate students. We would suggest that Congress address these challenges and change the IPEDS survey to make it better reflect categories of spending that are most useful to students, distinguishing between, for example, advertising to get more students in the door and counselors to help the ones who have already paid tuition succeed—both of which are currently combined as student support services. Financial data should also be reported based on an institution's audited financial data.

Possible bad actors could be missed based on this test.

This test would not catch every kind of malfeasance in higher education or indict every institution that is failing to provide a return on investment to students. For example, of the 22 institutions with graduation rates below 10 percent, their instructional spending ratios vary from 14 percent to over 650 percent. Any accountability system should be based on multiple measures and sets of guardrails, including gatekeeping rules to protect against novel predatory actors, robust accreditation reform that focuses the supposed watchdogs of quality on the student outcomes of schools they accredit, and protections for specific sectors that we know are subject to less oversight from other quality-control actors. But to the extent policymakers have been afraid to put those guardrails into place over fears they would shut down under-resourced institutions that are providing a public good and doing the best they can for students with limited funds, an instructional spending test could avoid that consequence and allow different sanctions to apply to schools that are struggling versus schools that continuously cash blank checks from students and taxpayers without delivering anything of value in return.