Creating an Updraft for Down-Ballot Democrats in 2020

For the past year, Third Way has been working with David Binder Research to conduct quarterly polls of primary voters to better understand what Democrats are looking for in 2020. In our final iteration of 2019, just weeks before voting begins, we find that voters are still sorting out their choice for nominee. But they are settled on one thing: they know they want a candidate who can create an updraft for down-ballot Democrats. While beating Trump is of utmost importance, primary voters aren’t myopic—they care about delivering majorities in the House and Senate and helping state-level candidates as well. And they think that requires rejecting some ideas that draw support from those most active on Twitter, and instead focusing on kitchen-table issues and unifying the country.

The Horserace: Same leader, but changes in momentum, and new entries and exits.

Tracking most national polls, our survey shows that Joe Biden leads the field with the support of 29% of voters. This gives him a two-to-one lead over his nearest competitors, Bernie Sanders at 15% and Elizabeth Warren at 14%. Pete Buttigieg comes in at fourth with 10%. The poll was in the field from November 25 – December 1, 2019. 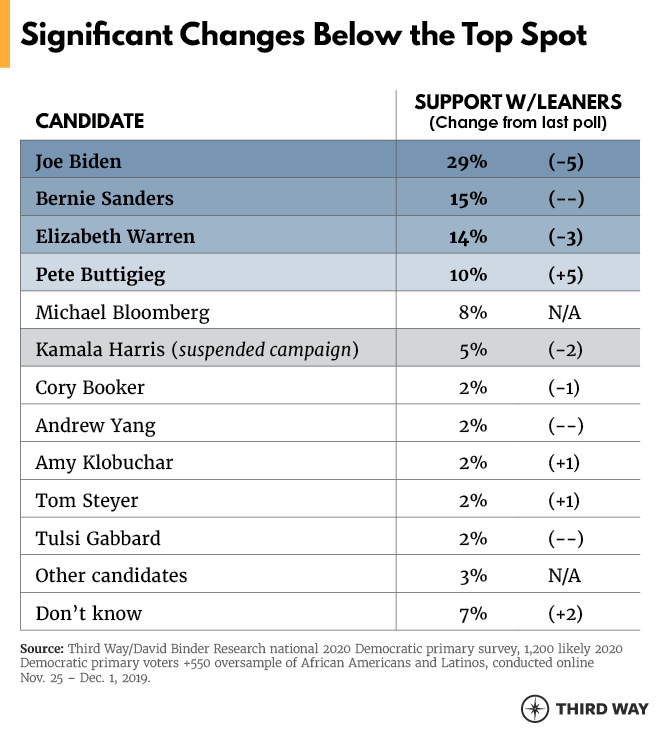 There is stability at the top of the candidate field, with Biden retaining his lead from our October poll. But underneath this veneer, voters’ shifting support is altering the contours of the primary. Biden’s numbers dipped five points between polls, while Warren lost three points, and Buttigieg doubled his support. Michael Bloomberg joined the field at 8%, while Kamala Harris exited the race with 5%. Sanders is the exception; he held steady at 15% between polls. No other candidate surpassed 2% in our survey.

Another way of analyzing the state of the primary is by testing how firm voters’ support for their current preference is right now. In an attempt to measure this level of fluidity, we asked respondents to distribute 10 votes across the field of candidates. They could give one candidate all 10 votes, or give 10 candidates each one vote, or anything in between. The results showed that voters’ support remains remarkably fluid. Just 25% gave any candidate all 10 votes, which indicated they were “fully committed.” Biden’s vote is the most entrenched. Nine percent of respondents gave him 10 votes, and another 15% gave him five to nine votes, which meant they were “leaning toward” him. But at the same time, 46% gave Biden zero votes, which signaled they may not be considering him at all.

Primary voters want a nominee who can create an updraft for down-ballot candidates.

Democratic primary voters’ top priority for 2020 is to make Donald Trump a one-term president. The necessity of beating Trump is helping motivate people to vote next year, and it is shaping who they are inclined to vote for in the primary as well. But voters also care deeply about electing down-ballot Democrats to other federal offices, in state contests, and in local races. And they believe that the presidential nominee will have a significant impact on those down-ballot Democrats’ chances in 2020.

On a basic level, voters recognize that the presidential nominee at the top of the ticket will affect what happens to down-ballot candidates. Fifty-six percent say that the nominee can help or hurt down-ballot Democrats “a lot” or “some.” Only 24% say that impact will be “just a little” or “not at all.” Older voters are most conscious of this link between the nominee and Democratic candidates’ performance at other levels. Sixty-six percent of those over 65 say that the nominee can help or hurt a lot or some, while this share drops to 48% with those under 35. Among all primary voters, 74% say it is “very important” or “somewhat important” for the nominee to take positions that will help down-ballot Democrats. On this, there is consistency across age cohorts: 80% of those over 65 and 76% of those under 35 agree. 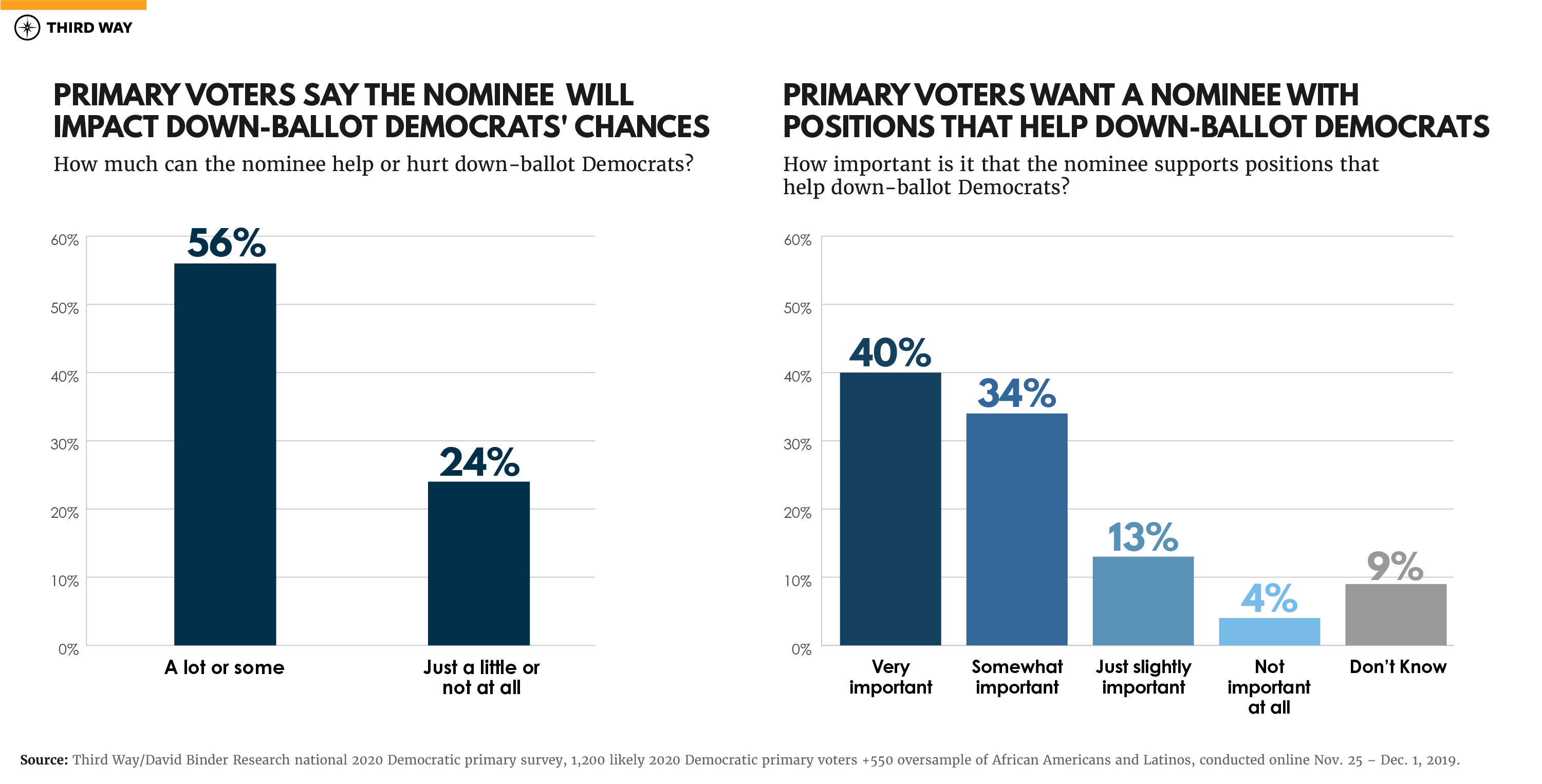 Despite their clear desire to create the best possible circumstances for Democrats to win up and down the ballot, voters are concerned that some candidates in the primary are embracing ideas and narratives that, if taken up by the nominee, will damage down-ballot Democrats’ chances. Many of these ideas first took root on Twitter, and its echo chamber has set up a dangerous distortion that may be confusing campaigns and candidates about the reality of what most Democratic voters actually want. Take the touchstone issue of Medicare for All. The minority of primary voters who are very active on Twitter are 15 points more likely to support Medicare for All than primary voters overall. These Twitter Democrats are 14 points more likely to want a candidate who identifies as a Democratic Socialist. They are also younger, more male, and more likely to live in cities than primary voters overall.

Democratic voters are much more aware than many national pundits seem to be that this social media milieu is not representative of voters in either the primary or the general election. Voters want to make sure their nominee doesn’t get distracted by a small but loud slice of the electorate.

All year our polling has tracked the issues that primary voters believe are most important for beating Trump in 2020. They have consistently identified kitchen-table issues as what matters and discounted those ideas that garner the most attention on Twitter. Reducing the cost of health care has led the list in all four of our polls, and in the latest one, the share picking it grew five points to 48%. Addressing climate change, passing gun safety legislation, and lowering taxes on working families while raising them on the rich and corporations have also been consistent priorities. By contrast, earlier in the year, 22% identified Medicare for All as a top issue for beating Trump, but this share fell to 13% in our latest poll. Other Twitter-driven ideas like a federal jobs guarantee were even less popular. 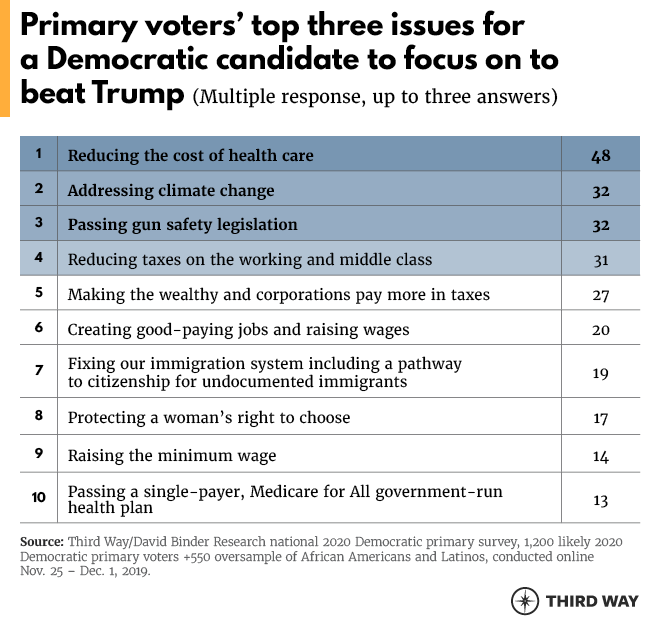 Another way of understanding primary voters’ priorities is figuring out what they would want a Democratic administration to do first. When asked what a new administration should focus on in its first 100 days, health care (27%) again led the list, followed by gun control at 16%, and cleaning up corruption in Washington with 15%. Those who picked health care as the first priority in a new administration want action on reducing costs over passing Medicare for All by a 66–31% margin. 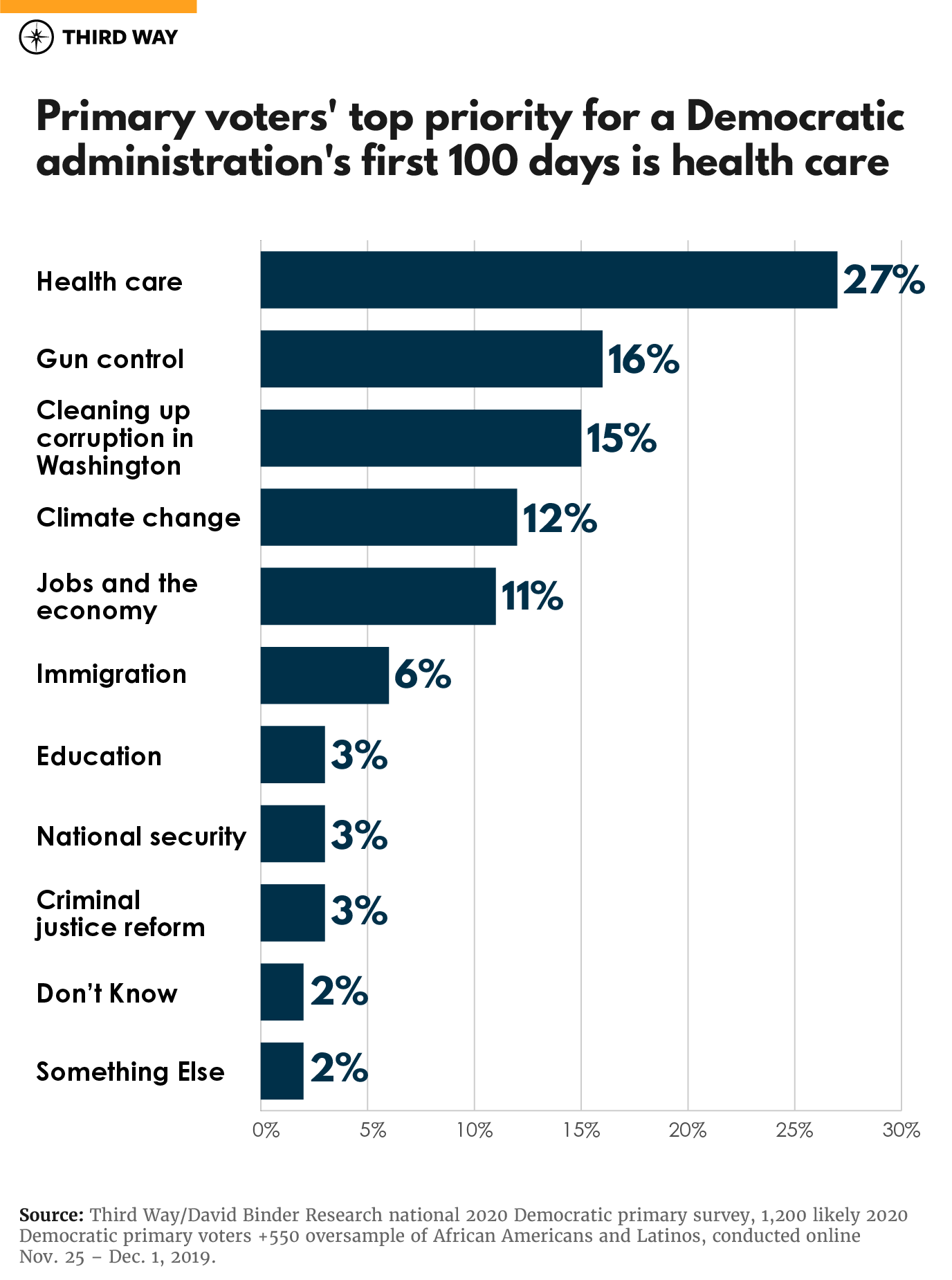 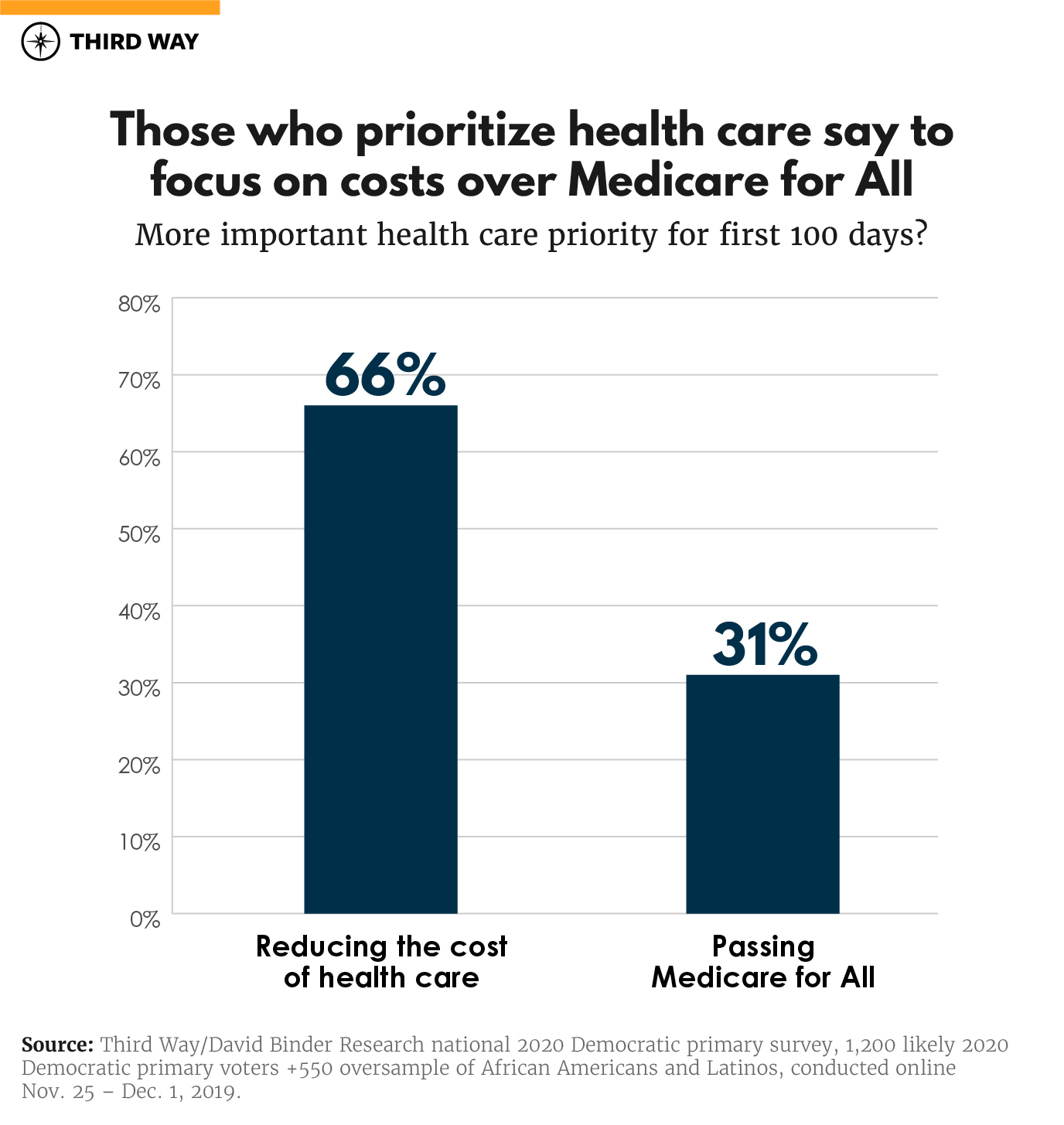 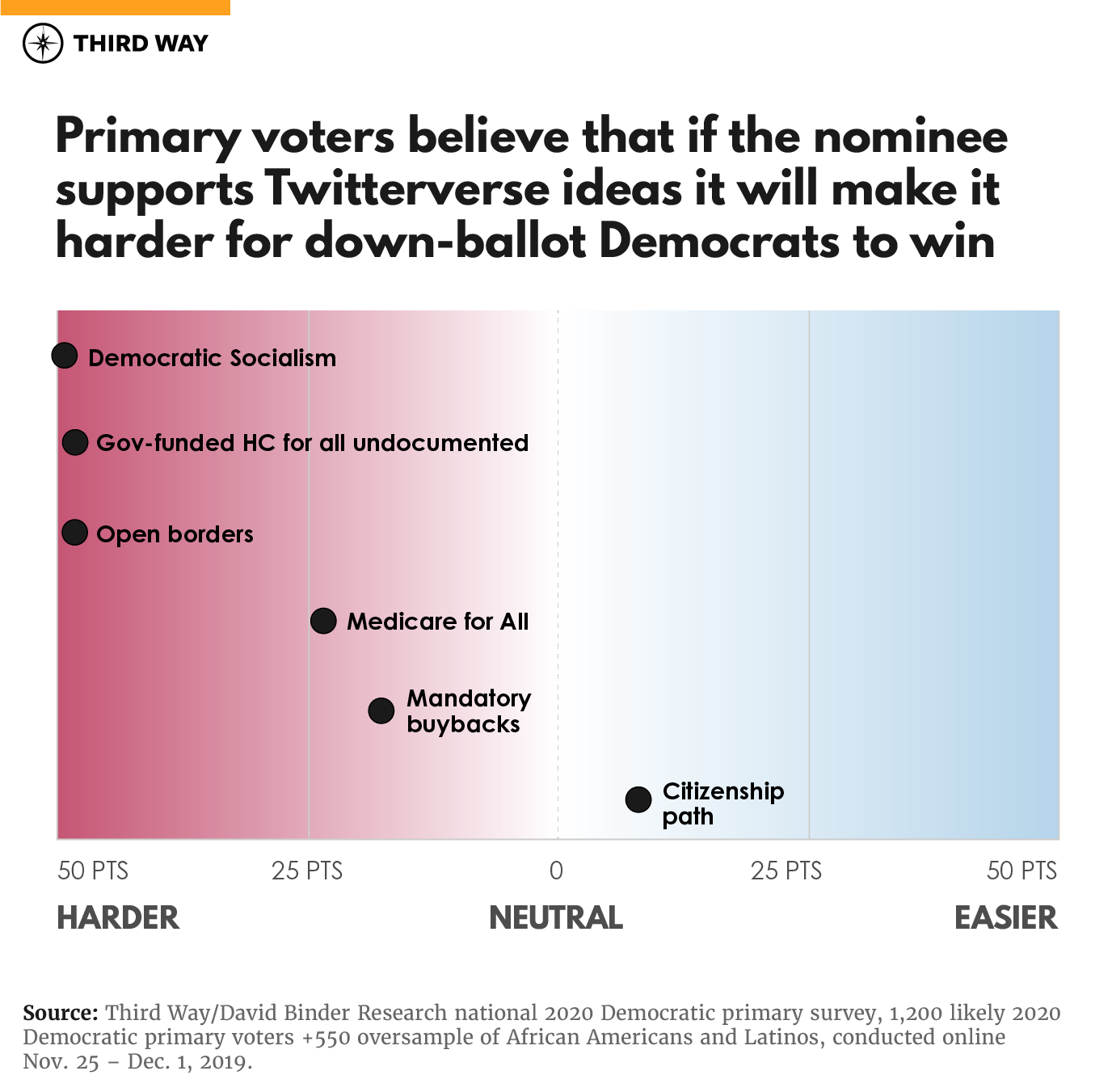 The message from Democratic voters is clear: some of the Twitterverse ideas floating around in the primary conversation will damage down-ballot Democrats’ chances if the nominee champions them. If voters are right, this could mean not only losing the presidency but ceding Democrats’ firewall in the House in the process, as well as losing the significant gains the party has made these last three years in state and local elections.

Primary voters want a nominee who can build broad support for Democrats at every level.

All year, we have asked voters a series of questions on the strategic approach they’d like to see from Democratic candidates for president. Consistently, Democratic primary voters have been clear that they want someone who will unify a broad coalition of supporters around an agenda that addresses urgent problems facing voters in their daily lives. This is especially true in the suburbs that will decide the 2020 election.

Democratic primary voters believe the way to win in 2020 and lift up down-ballot Democrats is to focus on urgent kitchen-table issues that affect all Americans’ daily lives, and through this agenda, unify a broad coalition that can deliver a decisive victory at every level.

Less than two months out from Iowa, most voters are not fully committed to any one candidate in the primary. But many are starting to consider what they want to see from the nominee come the general election. Top of mind is a candidate who can help create an updraft for down-ballot Democrats. Primary voters warn that if the eventual nominee embraces ideas that draw their popularity from the Twitterverse instead of the electorate, it could do real harm to down-ballot Democrats next year. Instead, they say focusing on kitchen-table issues and a unifying approach is what will beat Trump. At worst, they think the nominee must do no harm to down-ballot candidates. But ideally, primary voters want a candidate at the top of the ticket who can lift up all Democrats at every level across the country, so that the party can take back power from Washington, DC, to their statehouses and local communities.