What primary voters do know for sure is that to win in 2020, Democrats should take a page from their own 2018 playbook:

Primary voters know how Democrats won with a broad coalition in 2018, and candidates who embrace that playbook are likely to rise going into Iowa and beyond.

The race for the nomination is still up in the air.

All year, Third Way has worked with David Binder Research to conduct quarterly polls of Democratic primary voters. The latest, fielded from September 19th to 22nd, shows Joe Biden leading the field with the support of 34% of voters. This gives him a two-to-one lead over his nearest competitor, Elizabeth Warren at 17%, while Bernie Sanders is at 15%. Kamala Harris (7%) and Pete Buttigieg (5%) round out the top five, while no other candidate reaches 4%. 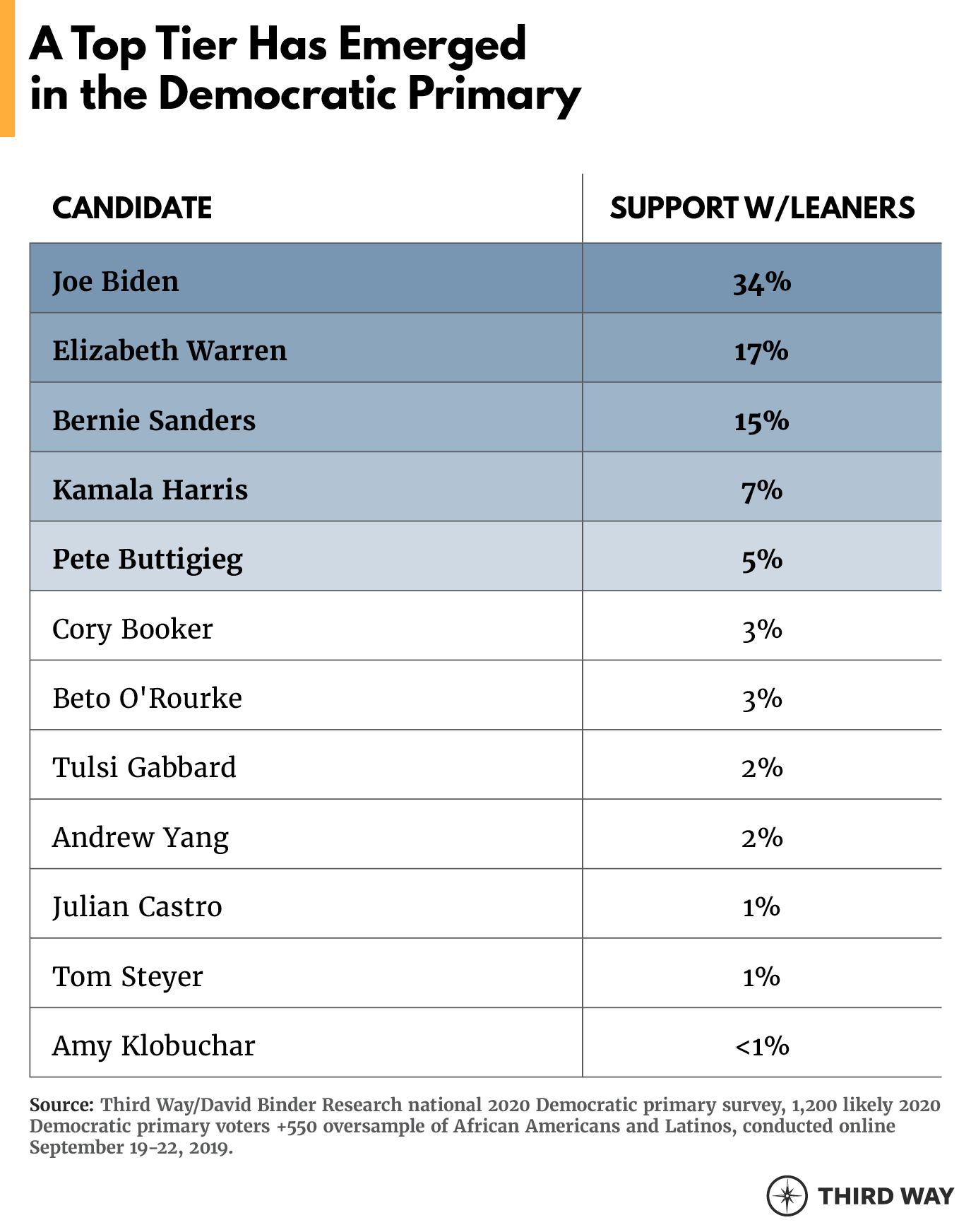 Biden draws support from a multi-racial coalition; he leads with white (33%), African American (43%), and Latinx voters (32%). But compared to public polls earlier in the summer, Warren has increased her support with voters of color from single digits to 13% with African Americans and 15% with Latinx voters. Age is a major cleavage in the primary; Sanders leads Biden by 13 points with voters under 35, while those over 45 back Biden over Warren by 24 points. But notably, those in the 35–44 age cohort are split between Biden and Warren. Among 2016 primary voters, Biden leads Warren by 26 points with voters who supported Hillary Clinton, while Sanders retains a meager 37% of his 2016 supporters.

Despite Biden’s substantial lead in the current horserace, the primary is far from over:

As the contenders compete for votes ahead of the primaries and caucuses, one evaluation voters will make is where candidates fall on the ideological spectrum relative to their own worldview. We asked Democratic primary voters to identify themselves on an ideological scale from 0 (liberal) to 100 (conservative), and then to identify the top 2020 contenders, as well as Trump and Barack Obama, on the same scale.

This data point throws into sharp relief why candidates are at great risk if they attack Obama’s record or stray too far from the mainstream path he blazed for the party.

The top takeaway is that Democratic primary voters align themselves with Obama. As seen on the chart below, the average self-identified ideology score for all primary voters is 46. And in turn, these voters also perceive Obama to be a 46 on the scale. This data point throws into sharp relief why candidates are at great risk if they attack Obama’s record or stray too far from the mainstream path he blazed for the party. Among the 2020 candidates, Biden is perceived as the closest ideological match, and every other candidate is perceived to be to the left of the primary voters they are attempting to woo. Strikingly, Democratic primary voters perceive Sanders and Trump to be equal distances from the ideological center. 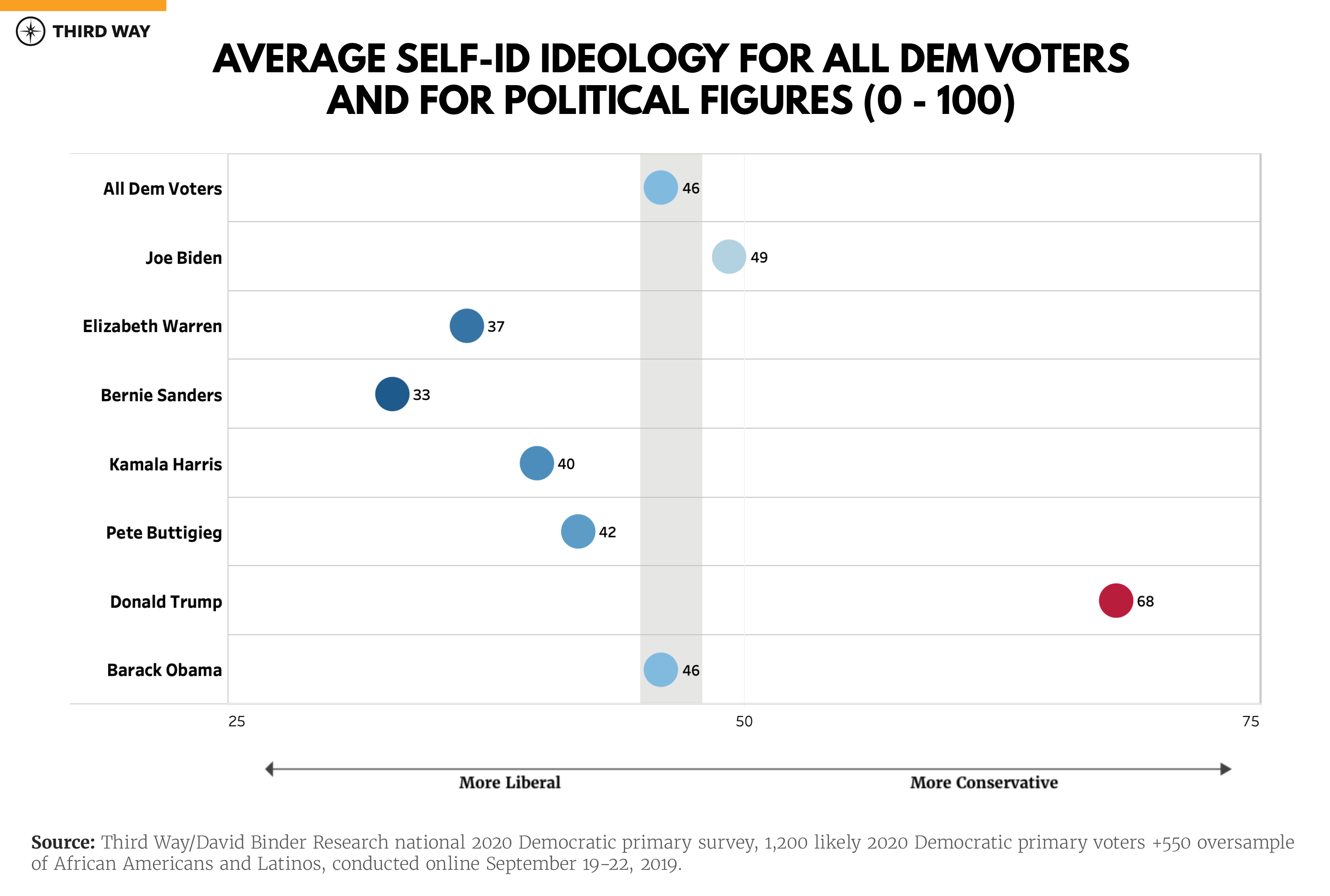 The race for the Democratic nomination is in a fluid state four months out from Iowa. It is clear that a top tier of five candidates has emerged, but there is a large chunk of the vote that is still up for grabs—enough to put any candidate in the hunt for the nomination.

Voters want a candidate who will run the winning 2018 playbook to defeat Trump.

Primary voters are perfectly clear on one thing: They want a nominee who will bring together a broad coalition of supporters around an agenda that addresses the urgent problems people are enduring in their daily lives. They want a unifier who can get things done. This is how Democrats won back the House and offices across the country in 2018. And primary voters are convinced it is how Democrats can win in 2020 too.

There were plentiful indicators that Democrats are dead set on winning in 2020.

While there is unanimity around many strategic questions, one issue where primary voters are split is over the best way to take on Trump: 48% want a candidate who will go toe-to-toe with Trump, but 44% want one who will mostly ignore his attacks. Democrats certainly want their candidate to stand up to Trump, but this split could indicate a difference in opinion about whether they want someone who will fight on Trump’s terms or someone who will set his or her own agenda. 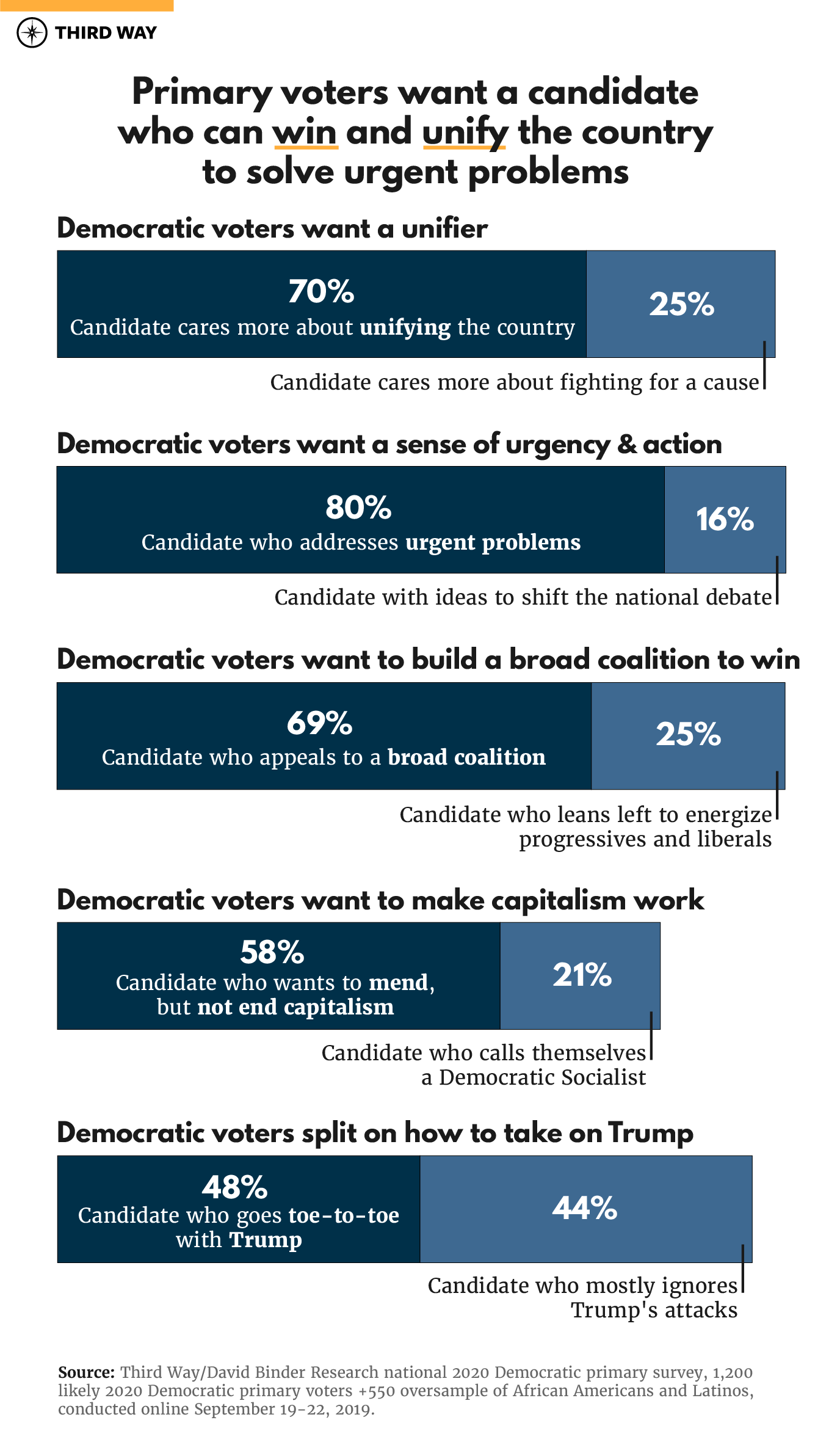 How candidates campaign is just as crucial as what priorities they campaign on. In 2018, Democrats won back the House, governors’ mansions, and races up and down the ballot by positioning themselves as unifying doers. It’s this same approach that primary voters are hungry for in 2020.

Democratic voters’ grand theory for how to win in 2020 is quite simple: follow the policy playbook that delivered the blue wave election in 2018. Three-in-four voters say that the policy priorities that motivated them to vote in 2018 are the same ones driving them in 2020. On the issues, that means voters want candidates to focus on kitchen-table concerns like health care and the economy, as well as cleaning up Washington. 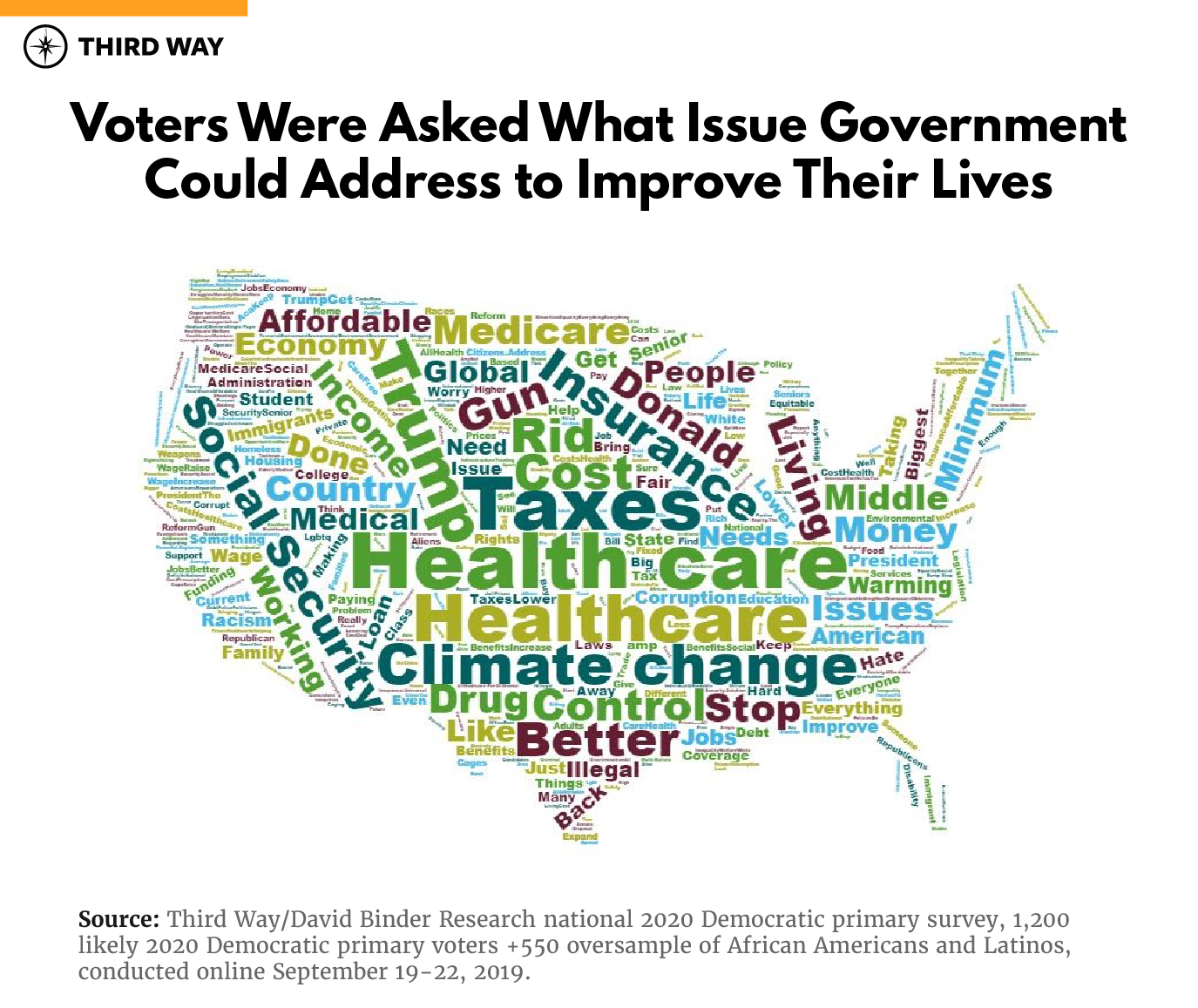 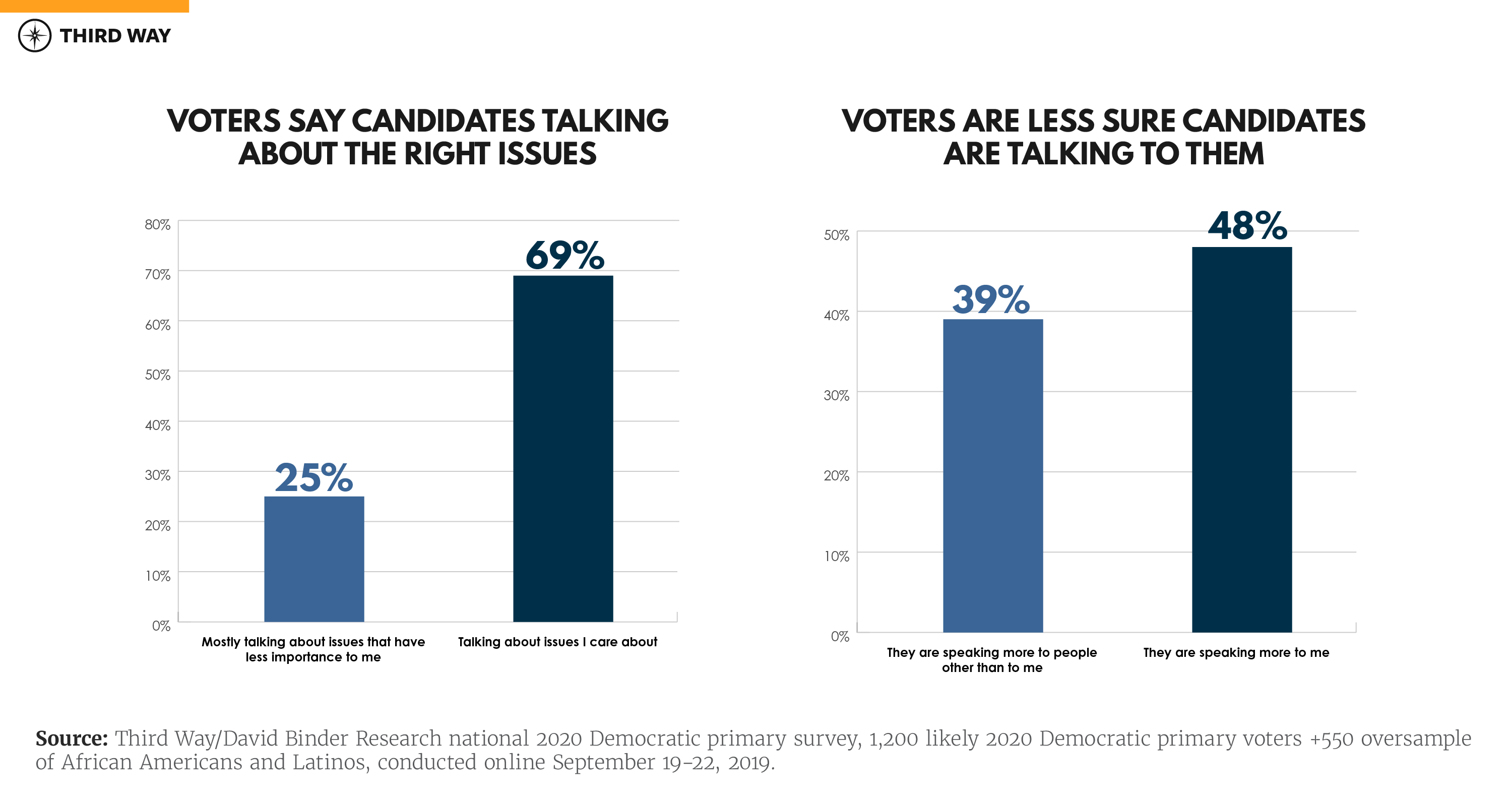 The disconnect between most voters saying candidates are talking about the right general issues but are less convinced candidates are talking to them becomes more acute when they are probed on more granular policy ideas. On health care, voters identify it as a top priority for 2020, and it has been the most talked-about issue in the primary to date. Much of the discussion has focused on whether to replace the Affordable Care Act with Medicare for All. But when voters are asked about the specific issues that matter most for 2020, a plurality (43%) identify reducing the cost of health care as a top priority, while just 16% say passing Medicare for All is a top priority. In 2018, winning Democrats focused on lowering the everyday costs of health care, and primary voters are begging candidates to return to that important conversation. 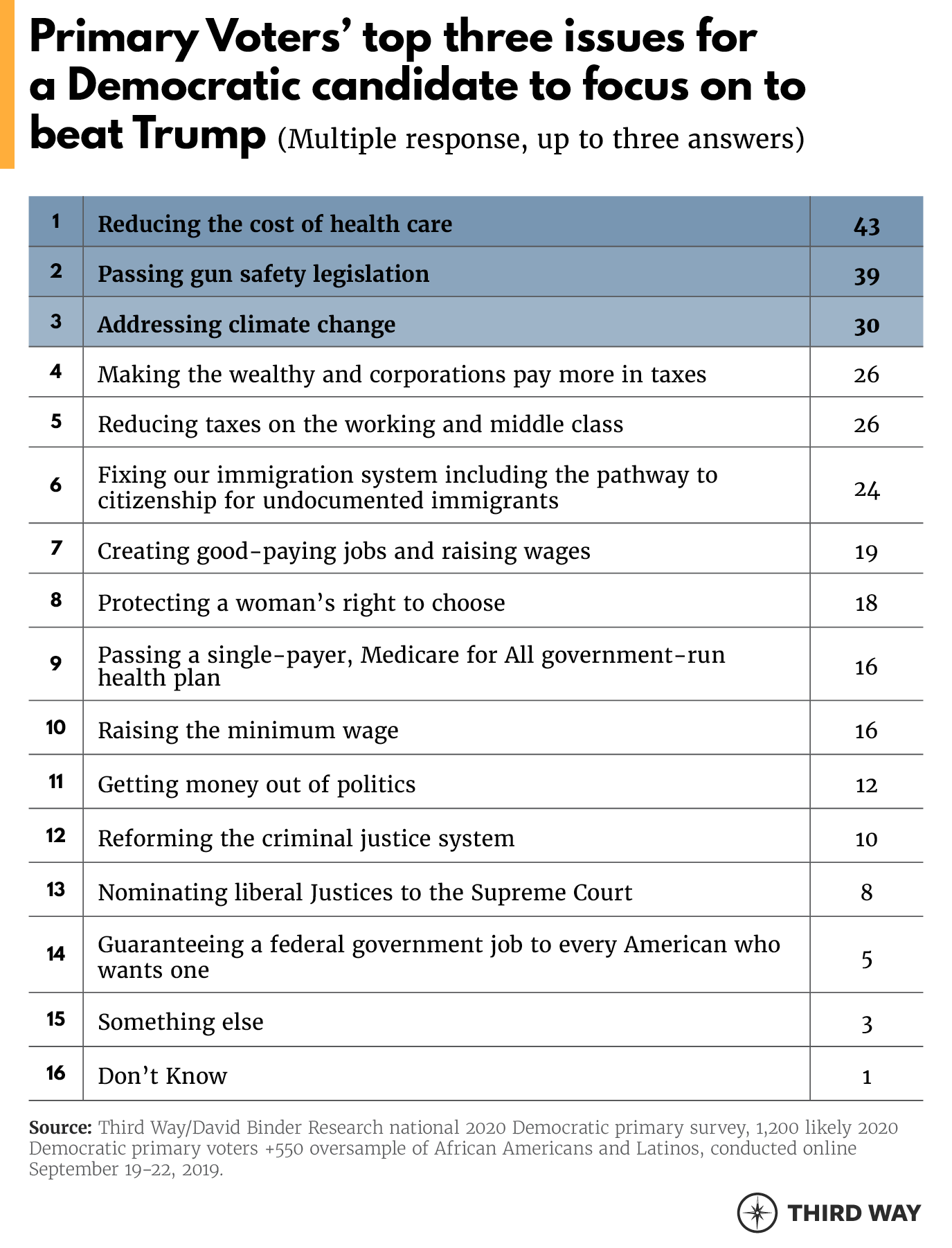 On the issues, primary voters are saying that the 2020 candidates are mostly on-topic but often missing the point. To course correct, those who seek to represent them as a presidential nominee in 2020 should borrow from the 2018 playbook.

Four months out from Iowa, Biden has the lead, but the contours of the race could shift significantly by February. Most voters feel that candidates are generally talking about their top priorities in terms of issues, but far fewer believe candidates’ ideas and solutions are directed at them. To address this, candidates would do well to draw from Democrats’ 2018 playbook, championing an agenda of reducing health care costs, creating economic opportunity, and cleaning up Washington. This offering resonated with voters in 2018 and could reap serious benefits for the 2020 candidates, both over the next four months and through the heat of the general election season.