America’s minimum wage is too low. For years, policymakers have evaluated different ways to raise the wage floor and, as part of that debate, Third Way released a regional minimum wage proposal in 2016, and then an updated version in 2019. Since then, there has been interest in revised estimates based on updated data. This memo includes updated data from our 2019 proposal containing five wage tiers, as well as new data from a simplified three-tiered regional minimum wage model.

In 2009, Barack Obama was inaugurated as the country’s 44th president. If that feels like a lifetime ago, it’s also the last time the federal minimum wage increased to a paltry $7.25 per hour through legislation signed by President George W. Bush in 2007. It’s been 14 years since a minimum wage increase has reached the President’s desk. Since then, many states and localities have opted to increase their minimum wages, but 21 states still abide by a woefully insufficient wage floor established over a decade ago.1

It’s long been time to raise the federal minimum wage, and there are many ways to do so. Most famously, the Raise the Wage Act would increase the federal minimum wage to $15 per hour by 2025, but it is a non-starter in the Senate where it received just 42 votes in March 2021.  Years ago, Third Way proposed a different approach to raise the minimum wage: a regional minimum wage, accounting for local cost-of-living differences and ensuring that all workers are paid a fair wage in their local economy. As we noted, America may be one country, but with hundreds of different micro-economies. As many economists and editorials have since written, it makes sense to enact a different type of wage floor that reflects these differences and protects workers in states where wage increases have been impossible.

How a Regional Minimum Wage Works

Different metro regions in different states have different costs of living. For example, renting an apartment, buying a hamburger, going to a movie, or getting a haircut cost far more in New York City than in Jonesboro, Arkansas. A regional minimum wage takes those measurable regional differences into account, creating different minimum wages depending on the cost of living in an area. Our original idea broke the country into five wage tiers, and our updated proposal simplifies that to three tiers.

A three-tiered regionally based minimum wage is modeled after Oregon’s state minimum wage regime. In 2016, Oregon’s state legislature established standard, nonurban, and metro county specific minimum wages including explicit annual increases, eventually phasing into yearly inflation adjustments in 2022.2 By mid-2021, high-cost Portland will have a $14 minimum wage, low-cost rural areas a $12 minimum wage, and the medium-cost rest of the state will be at $12.75.

In 2019, our proposal included five tiers and a base wage of $11.55. Our new proposal consolidates five tiers into three, depicted below. 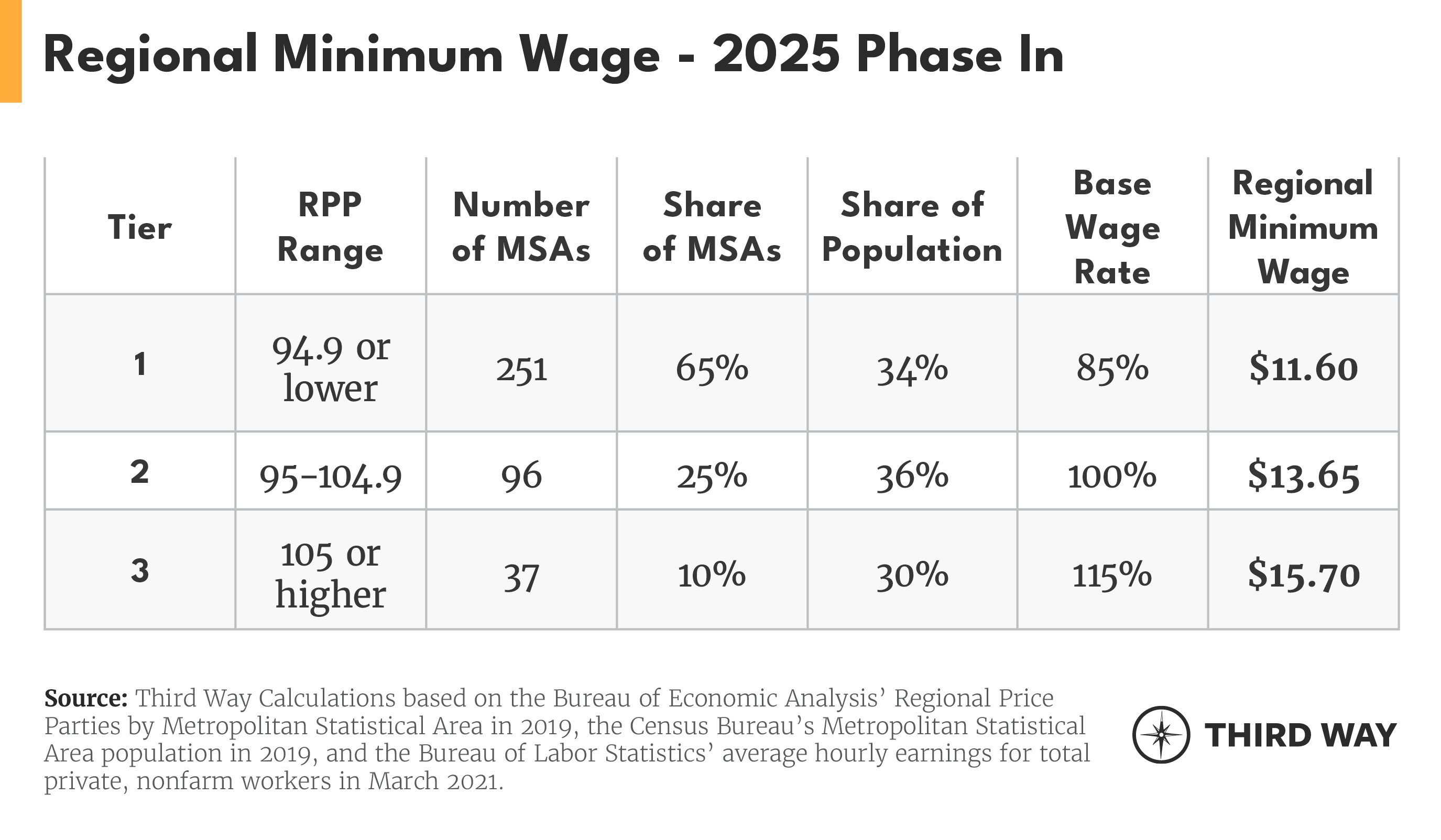 It’s important to note several of the highest cost regions in the country exist in states with sorely outdated minimum wages and Republican controlled state legislatures or governorships, preventing workers in these states from getting the raise they deserve. Workers in the Manchester-Nashua MSA in New Hampshire still earn the $7.25 per hour minimum wage set over a decade ago, despite living in the top 6% of MSAs in the country by cost of living. Under our plan, these workers would receive a badly needed wage adjustment, better aligning income and cost of living in that area.

Additionally, over seventeen million residents reside within five MSAs in Texas that fall within our second wage tier based on cost of living. Minimum wage workers in Midland, Odessa, Dallas, Houston, and Austin still earn $7.25 per hour. Texas is also firmly under the control of a Republican trifecta at the state level, kneecapping attempts to raise the wage legislatively. The regional minimum wage proposal delivers a sorely deserved raise for workers, who are overwhelmingly Hispanic, in these high-cost areas in Texas.

We live in a country with twenty-nine different minimum wages and wide variation in local cost of living. We need a wage floor that incorporates regional differences and defends fair wages for workers in states across the political spectrum. Our plan creates appropriate wages and annually adjusts for inflation, preventing another decade of inaction harming low-wage workers across the country. It would also minimize reductions in employment and economic distortions in low-cost areas.