America may be one country, but we are made up of hundreds of micro-economies. That’s why it’s time for a regional minimum wage that reflects these differences and helps people wherever they live. This new approach would immediately raise wages and lift millions of working people out of poverty. It would also break the decades-long logjam in Washington where the wage floor is lifted inadequately once every ten years because high-cost areas need a far different minimum than the low-cost areas that are over-represented in Congress.

Under this proposal, the benchmark national minimum wage would be set at the beginning of each year to one-half of the hourly wage for nonsupervisory workers. In 2019, that wage would be $11.55. Each metropolitan area and rural community would be placed in one of five categories based on living costs. The minimum wage would be either slightly below that benchmark for low-cost areas or slightly above for high-cost ones. States and localities would still be free to pass higher minimum wages.

Since July 2009, when Congress raised the hourly minimum wage to a meager $7.25, the cost of living in the US has increased 17.7%, even as the wage floor has stood still. Rather than stall another decade, let’s set an increased minimum wage that is right for everyone and grows every year. It costs $31 to park for a day in Brooklyn, NY. It cost $35 to park for a month in Cumberland, MD. We need a higher national minimum wage—but one that reflects this difference.

Under the Regional Minimum Wage:

Two eggs, bacon, hash browns, and toast. It’s $13 at Tops Diner in Newark.1 It’s $5.79 at Pop's Diner in Arcadia, OK.2 It costs $35 to park for a day in downtown Boston.3 It costs a dollar in Cincinnati.4 Rent for a two-bedroom apartment averages $4,500 a month in San Francisco.5 It’s $870 a month in Rapid City, SD.6 We use the same national minimum wage but live in vastly different economies.

These differences matter in the minimum wage debate—an intransigent fight over a wage floor that is maddeningly difficult to raise. The last time a minimum wage law reached the President’s desk was in 2007 when a series of increases lifted the wage to an inadequate $7.25 by July 2009.7 Before that, it was in 1996.8 Today the national minimum wage is well below its 1968 peak in purchasing power of $11.78.

Partisan differences are often blamed for the slow rise in the wage floor, but a key (and often overlooked) factor is how the cost of living varies by region in America. Unfortunately for minimum-wage workers in high-cost areas, low-cost areas are over-represented in Congress. In the House, safe red districts have median yearly incomes $5,000 below those of safe blue districts.9 That translates to a difference of $2.50 per hour. And in the Senate, the cost of living in blue states like Massachusetts, New York, and California bears no resemblance to the cost of living in red states like Arkansas, Nebraska, and Wyoming.

So we’re stuck with a structural logjam on the minimum wage that is broken up about once a decade when the stars align. Even then, the wage floor gets bumped up to a level that is still unsatisfactory to people in medium- to high-cost areas.

Thankfully, states and localities have taken it upon themselves to lift their wage floors, which is also instructive. Recently, Arkansas and South Dakota each raised its minimum, but to less than $10. Colorado voted to raise its minimum wage to $11.10 and Maine to $11. And Los Angeles lifted its wage to $14.25 and New York City to $13.25.10 But 18 states have only the federal minimum wage of $7.25 an hour.11

Ideally, the minimum wage would account for the differences in living costs between regions. It should be set high enough to raise the maximum number of full-time workers out of poverty but not high enough to encourage automation, a reduction in low-wage worker hours, or off-shoring. And it should adjust upwards over time without depending on Congress’s ability to pass a bill.

That is what we attempt to do with the regional minimum wage. Under our proposal, the minimum wage would reach $15 an hour by 2023 in areas like Seattle, New York City, Boston, San Francisco, and Chicago. In less expensive parts of the country, it would get there at a later date.

We propose to replace the single federal minimum wage with five regional minimum wages based on regional cost variations. If implemented for 2019, the minimum hourly wages across the country would range from $9.80 to $13.30 and automatically rise every year with wage inflation.

The second step would be to group areas of the country into five tiers based on Regional Price Parities, or RPPs. The Bureau of Economic Analysis maintains databases with RPPs by metropolitan statistical areas (MSAs)—areas consisting of one or more counties comprising an urban core of at least 50,000 people, plus surrounding counties with commuting ties.14 MSA data would be used over state-level data to truly assess each area’s economic profile.

Medium low-cost areas with RPPs within the 90.0 to 94.9 range (Tier 2) would have a wage floor set at 92.5% of the national average. If this were put into place today, communities including Birmingham, AL, and Oklahoma City, OK, would have a $10.70 minimum wage. Approximately 130 metro areas encompassing 57 million people are in this category. 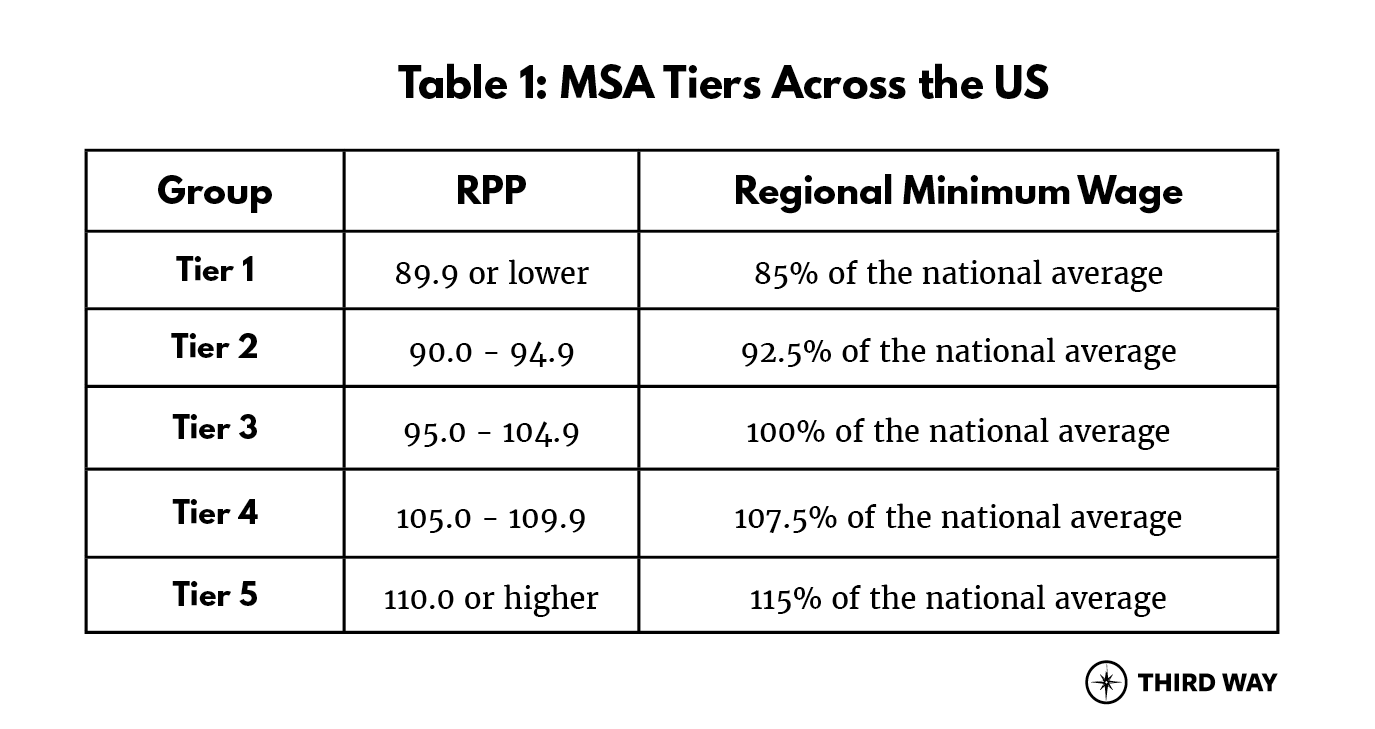 Table 2, below, shows that a regional minimum wage in these five tiers would do a far better job providing all workers with a similar degree of purchasing power than any single minimum wage could. Column 2 shows each area’s current minimum wage, and Column 3 shows its current purchasing power. As you can see, there is currently large variation in purchasing power—ranging from $7.41 in Las Vegas, NV, to $11.42 in Santa Fe, NM, among these select cities.

Our approach is demonstrated in Columns 4 and 5. Column 4 shows what the new regional minimum wage would be, and Column 5 shows what purchasing power would be for that rate. As you can see, when minimum wages are adjusted for costs of living, minimum-wage workers have about $10 to $12 of real wages, regardless of geography. 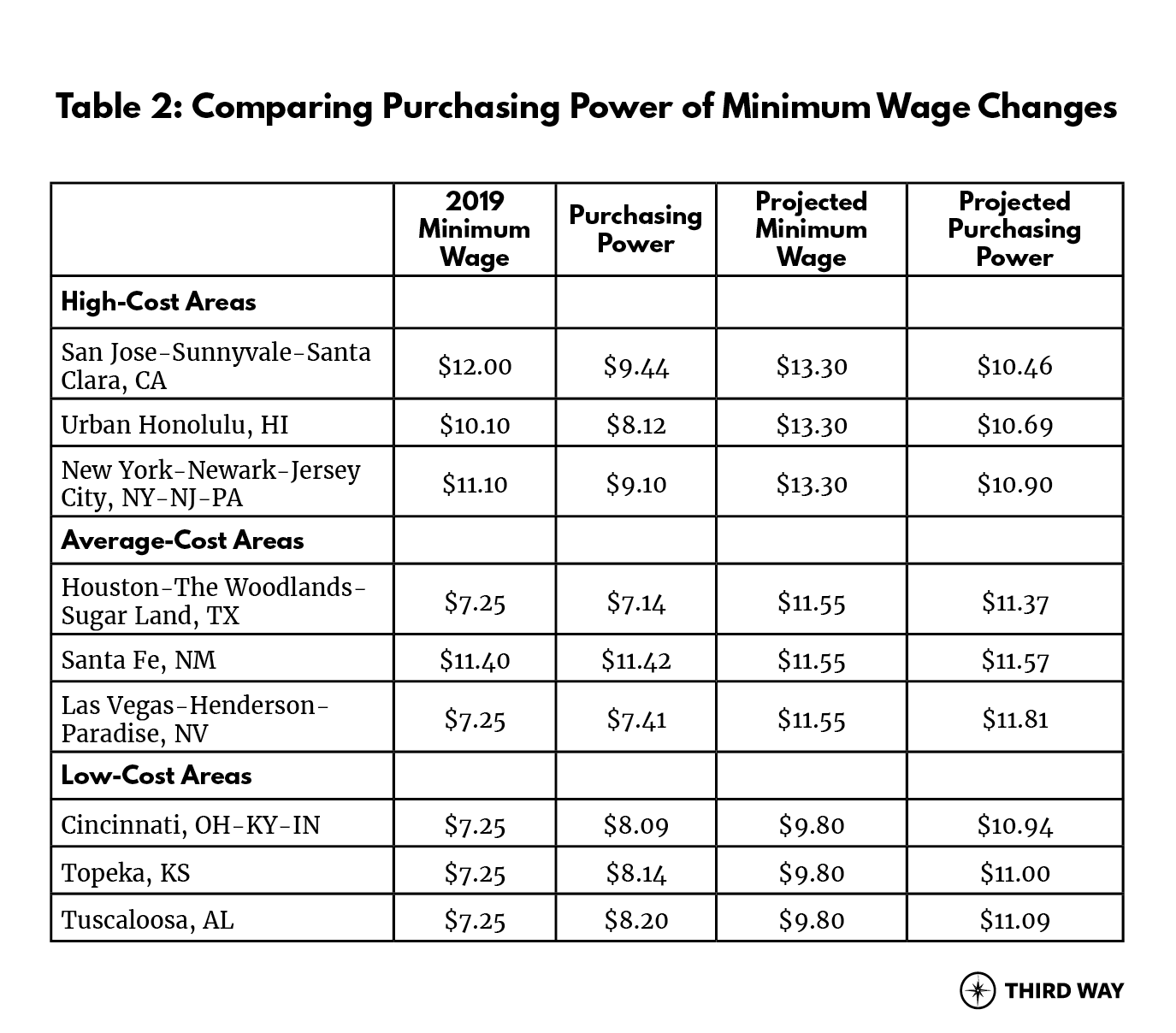 Basing the regional minimum wages on the average hourly wage and regional cost variations reduces the need for extended phase-in periods. Automatic annual readjustments ensure that workers earn wages that match their economic circumstances and geographies. Areas of the country that are outside of the MSAs generally fall into Tier 1 with the lowest cost of living, though high-cost states are exceptions. MSAs can be updated every decade to account for significant population changes.

Additionally, any update to the federal minimum wage should also raise the phase-out range for the Earned Income Tax Credit (EITC) to ensure that increases in wages do not result in a reduction of EITC benefits. This proposal would do nothing to diminish the EITC’s incentive to work.15

The regional minimum wage would ensure that all minimum-wage workers, regardless of where they live, receive a fair and appropriate wage. It would also minimize reductions in employment and economic distortions in low-cost areas. This policy would ensure that cashiers working in Manhattan and Carbondale, IL, could buy the same goods and services. It would finally quell the oft-cited fear that a big city minimum wage would destroy jobs in small towns while at the same time allowing workers to earn a good life.

Note: This report has been adapted from an earlier version of the policy written by Joon Suh and published by Third Way on February 11, 2016.