On June 21st, Third Way’s national security team launched the US-China Digital World Order Initiative. The bipartisan initiative underscores a new and decisive divide that pits America’s approach of “digital democracy” against China’s approach of “digital autocracy"—and the US needs to catch up. Members of the private sector, civil society, and government were in attendance. The event followed up on Third Way’s introductory memo for the program, and a graphic on China’s spreading surveillance technologies.

Kicking off the event, Valerie Shen outlined the rationale behind the new US-China Digital World Order Initiative, as Vice President for the National Security Program at Third Way. Valerie highlighted that China is executing a detailed plan to become the world’s digital superpower. The US is not. She also noted the program’s launch is personally meaningful to her as a Taiwanese-American whose’s own family fiercely held liberal values after fleeing the Chinese Communist Party. Overall, she underscored the initiative’s bipartisan and whole of government aims to create a real plan for challenging China’s spreading digital authoritarianism.

Both Democracy Digest and the Washington Times highlighted the US-China Digital World Order Initiative’s aims to be bipartisan and bring together a whole of government approach. 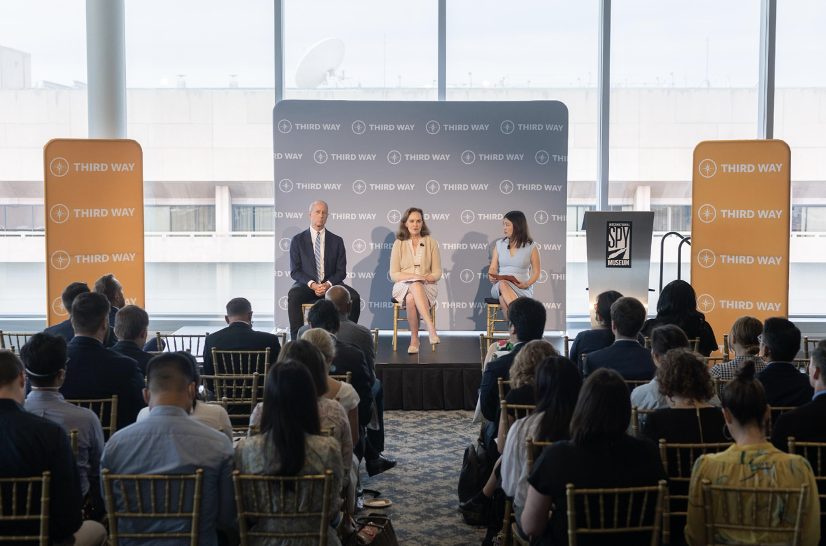 Following opening remarks, Valerie was joined by The Honorable Michele Flournoy, former Undersecretary of Defense for Policy, as well as The Honorable Rep. Mac Thornberry, former Chairman of the House Armed Services Committee, for a fireside chat. They discussed the potential for bipartisan and whole of government + private sector strategies for countering China, as well as the threat of Chinese digital authoritarianism amid the Russian invasion of Ukraine. 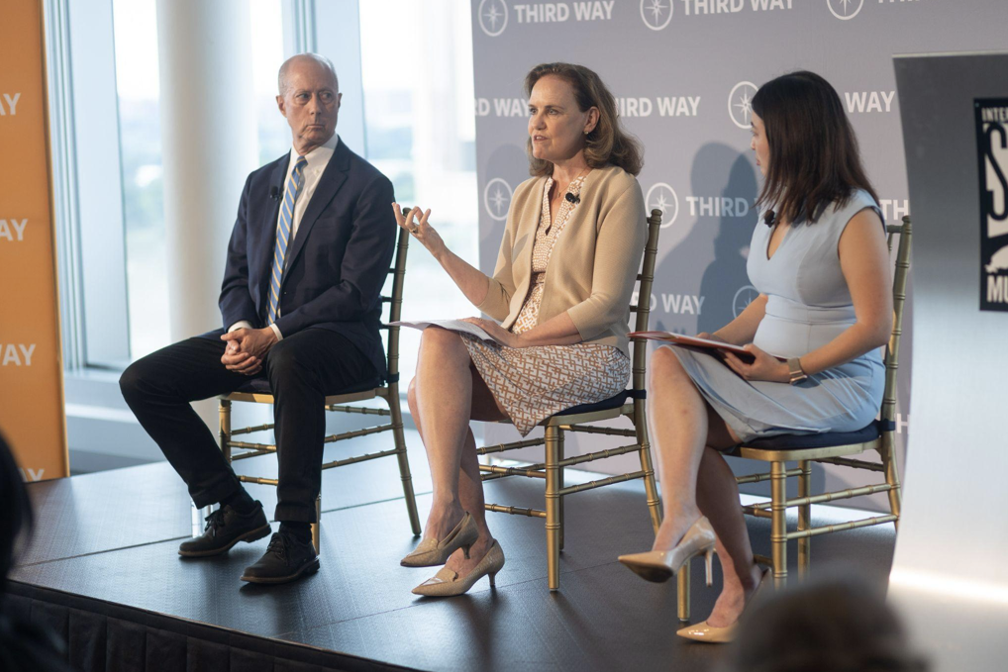 Both Thornberry and Flournoy agreed that though additional investment was needed to secure America’s technical primacy, the traditional methods of Defense Department funding and contracts might not be the best method for sparking critical advancements. Thornberry further emphasized that the American system of government is good, it just needs some support to let it work, such as through updating technology export controls. Flournoy expanded on the need for a base-level framework in combating China’s digital model, suggesting a potential starting point including supporting a free and secure internet with like-minded countries, maintaining America’s economic edge, and ensuring America’s advantage in novel domains such as cyber and artificial intelligence. 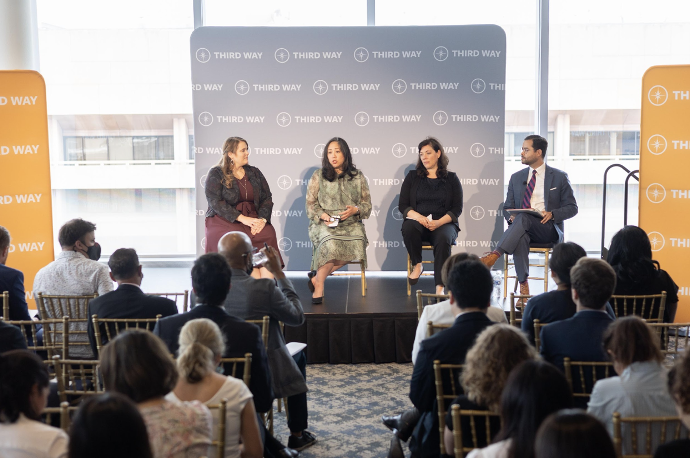 As reported in CNN: “Some of those tactics ‘may form parts of China's playbook’ in future attempts by Beijing to project power beyond its borders, according to Mieke Eoyang, deputy assistant secretary of defense for cyber policy. ‘The cyber dimensions of [what Russia is trying doing in Ukraine] are incredibly important to us, especially in the Defense Department, to understand what the playbook might be if another cyber-capable country were to attempt to do this,’ Eoyang said Tuesday”

Jayson Browder, Senior Policy Advisor for the National Security Program at Third Way, took over for a panel discussion on US-China digital governance relations and strategy where he was joined by Third Way alum Mieke Eoyang, Deputy Assistant Secretary of Defense for Cyber Policy, Ruth Berry, Deputy Assistant Secretary of State with the Bureau of Cyberspace and Digital Policy, and Carole House, Director of Cybersecurity and Secure Digital Innovation with the White House National Security Council. They discussed how Russia’s invasion of Ukraine has informed US-China digital relations, the threat of (and possible mitigations to) spreading Chinese digital authoritarianism, and the specter of US-China decoupling.

Proud to see #women lead this discussion on national strategy and the #China challenge. 👏👏 @ThirdWayNatSec thanks for signing the #MakingSpacePledge and leading in #Diversity in #CyberSecurity @MiekeEoyang Ruth Berry @StateDept & Carole House pic.twitter.com/4AybAN2Sbd

All the panelists affirmed the need for liberal democratic values to form the backbone of how the US and it’s like minded partners should establish the governance of cyberspace and apply increasingly powerful technologies. The panelists also noted the risks associated with allowing China a free hand to spread their technology norms including the restricted ability for the US to confidentially share intelligence with allies, the empowerment of foreign governments to institute authoritarian control protocols on technologies like smart phones, and the potential perversion of central bank digital currency (CBDC) innovation. 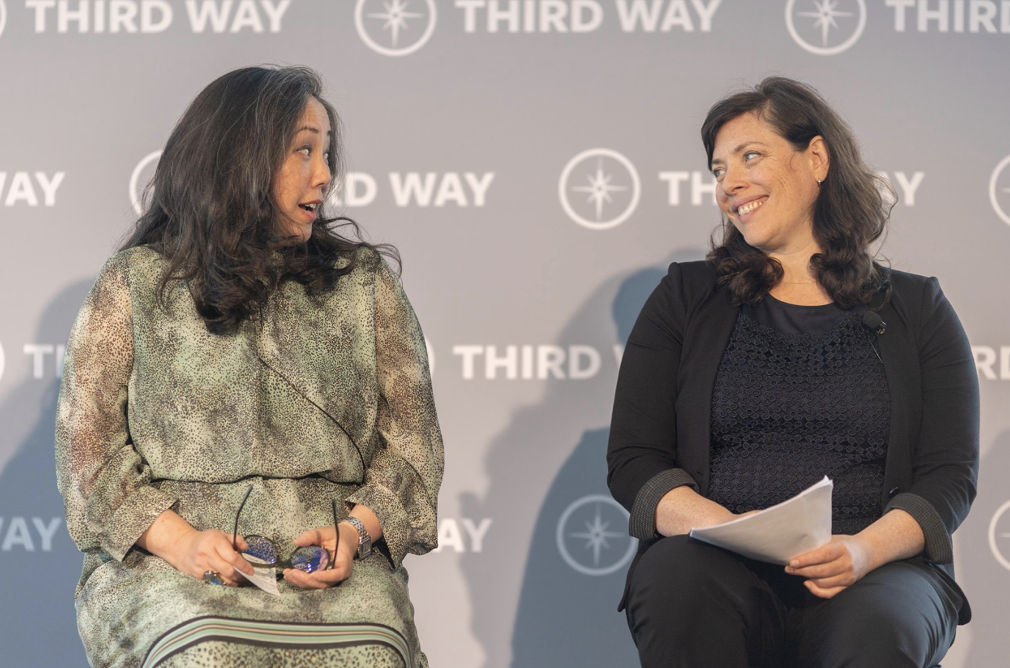 As reported in NextGov, : “I think creating more inclusive and democratic processes that bring in emerging countries who will have incredible innovation over the coming decades and be the users and deployers of so much of this emerging technology is also really important,” Berry said, noting a 60-nation declaration the White House led in April on the future of the internet.

Individually, Carole discussed the importance of aligning with the private sector and investing in new technologies to compete with China, particularly digital assets. President Biden’s executive order on cryptocurrency regulation and the Department of Commerce's recent request for comment on crypto assets are proof progress is being made. Ruth spoke about the importance of partnering with like-minded countries, and civil society, and working together with these groups in international standards bodies to ensure a free and secure internet is established and firmly backed. The US government and industrialized governments generally cannot be the only speakers on internet standards. Mieke dove deeper in explaining the lessons Russia’s invasion could give for the risk of cyber operations in conflicts more generally, including countries having resilient digital infrastructure which can avoid being taken down or restricted during an occupation. 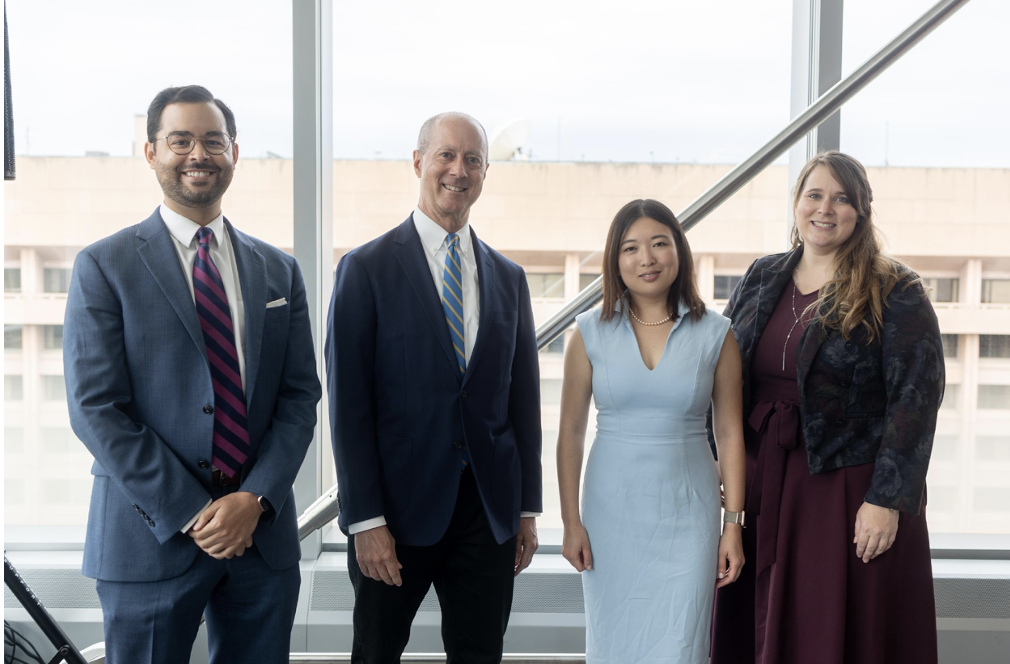