At a press conference in Nebraska last Saturday, Dr. James Lawler at the University of Nebraska Medical Center (UNMC) said, “This is the second inning of this game. We cannot return to complete normal until we have a vaccine.” Dr. Lawler is an associate professor in the Department of Internal Medicine at UNMC and the executive director of international programs and innovation for the Global Center for Health Security, as well as the director of clinical and biodefense research at the National Strategic Research Institute. So, he has street cred.

But what does this really mean? Nine innings is a long game, and we’re just in the beginning.

Thinking ahead to future innings, our Third Way experts released a “CoronaCare for Everyone” plan that would rescue health care and put us in a position of strength to help recover from this pandemic: Everyone needs to get tested, and ultimately vaccinated. Everyone must get proper health care coverage and treatment. Every frontline worker must be protected. These recommendations require a massive Federal government-led effort.

The consequences are dire without deployment of such a plan. In other words, if we keep implementing measures that may be inadequate, do we risk a meager recovery or even worse? If we can’t hit a home run with CoronaCare for Everyone, do we strike out? That is the question we are all guessing about. But we must guess, because this is an unprecedented pandemic.

How Bad Can Unemployment Get? 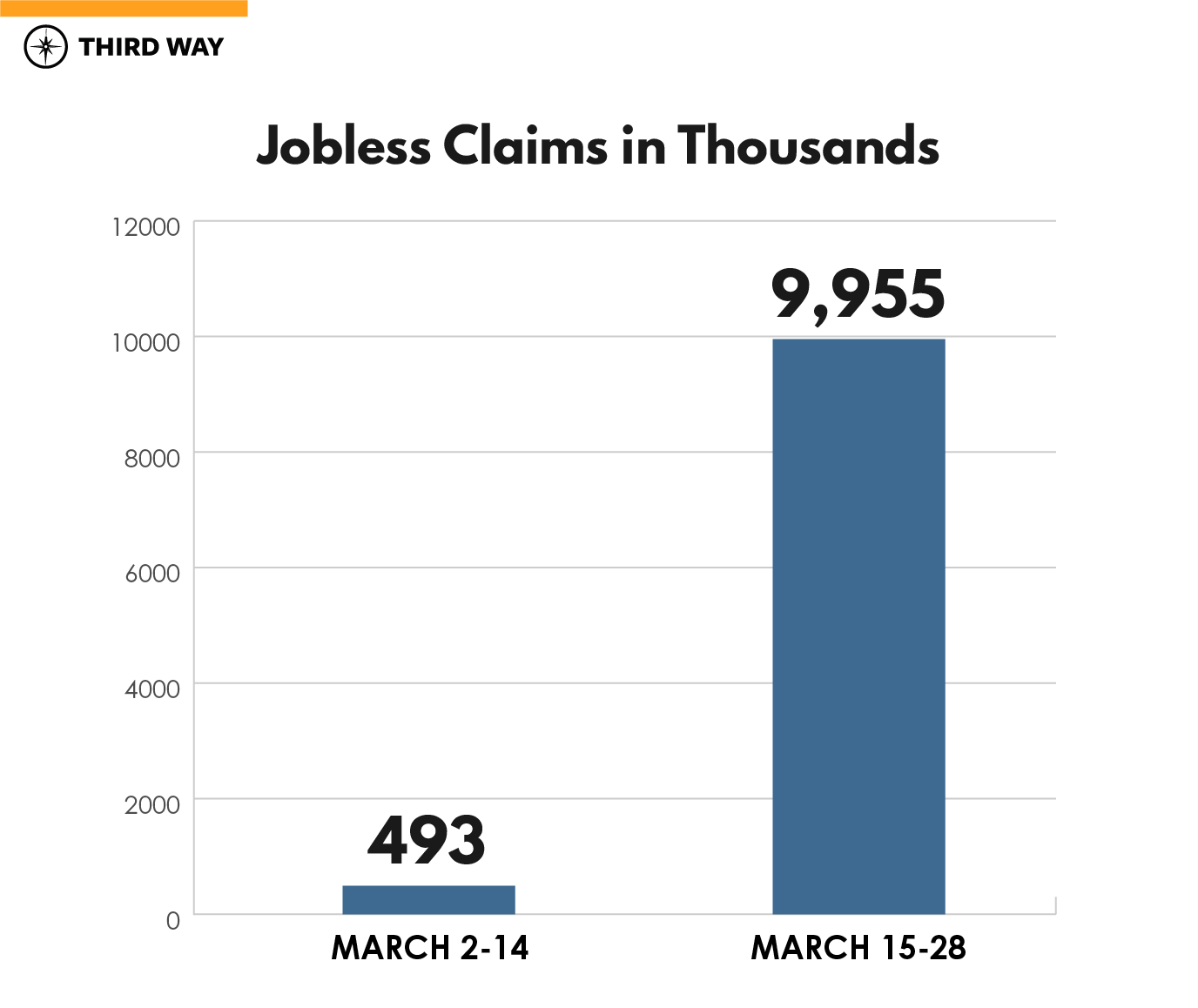 The jobless claims would have been higher were it not for three key factors:

If we are in the second inning of a health crisis, then we can expect that the crash of unemployment will be harder and more enduring than what we have ever seen. The CARES Act will help to alleviate this pressure cooker, but it won’t turn off the heat completely. Yesterday, former Federal Reserve Chair Janet Yellen said we are currently running at about a 12 – 13% unemployment rate. That is a reading which may take into account the initial period of shutdown for over 50% of the population. The upcoming period will include well above half the population in a shutdown with many of the nation’s small businesses shuttered. About one-half of the 129 million private sector employment is small business. If 50% of these small businesses are closed, that would represent 32.3 million people. If 10% of large employers are shut down, that would represent 6.5 million people. Adding these two together would amount to a 24% unemployment rate. It could be worse.

Responding to the Crisis

During the next several days, our Third Way experts will be sending out a host of urgent policy solutions to address this crisis. These policies will address how to rescue workers, businesses, communities, and state and local governments. These near-term policy solutions point to the importance of quickly launching more targeted government support.

We are also cataloging vulnerable industries, should this health crisis produce a relentless, persistent downturn in the economy. Solutions to address large employer distress will be critical in the months ahead. So far, the CARES Act will be assisting airlines, cargo carriers, and companies vital to national security. The Federal Reserve has stepped up to provide facilities designed to offer lending through corporate bonds. More large industries will need help. As health experts have described, our factories and businesses are vulnerable to further viral spread if airtight systems are not put in place to test, distance, contact trace, and test again. Barring this type of rigorous system leading up to universal vaccine availability, restarts will be hampered and delayed.

And lastly, we are looking ahead to important long-term recovery actions that will support job creation and improved infrastructure to confront future climate risks and resiliency. We will be issuing this analysis soon, beginning with transportation, in collaboration with Transportation for America.

By now, there is a consensus that we are confronting challenges beyond what most of us could imagine. Mark Zandi of Moody’s Analytics estimates that over 25% of the economy is closed. Health experts have laid out systematic steps to take. Policymakers have pushed forward with unprecedented support for workers, state government, and businesses. More assistance is urgent, critical, and necessary.