The first batch of results are in: The March employment report last Friday came back with job loss numbers exceeding 700,000. And today we learned that jobless claims for the week ending April 4th rose by over 6.6 million. For the last three weeks of data ending April 4th, claims have ballooned to nearly 17 million, which is 10.2% of the March labor force. Even though these reports only capture the initial pain from the shutdowns, we are truly seeing a labor market in crisis unlike anything we have seen in several generations. 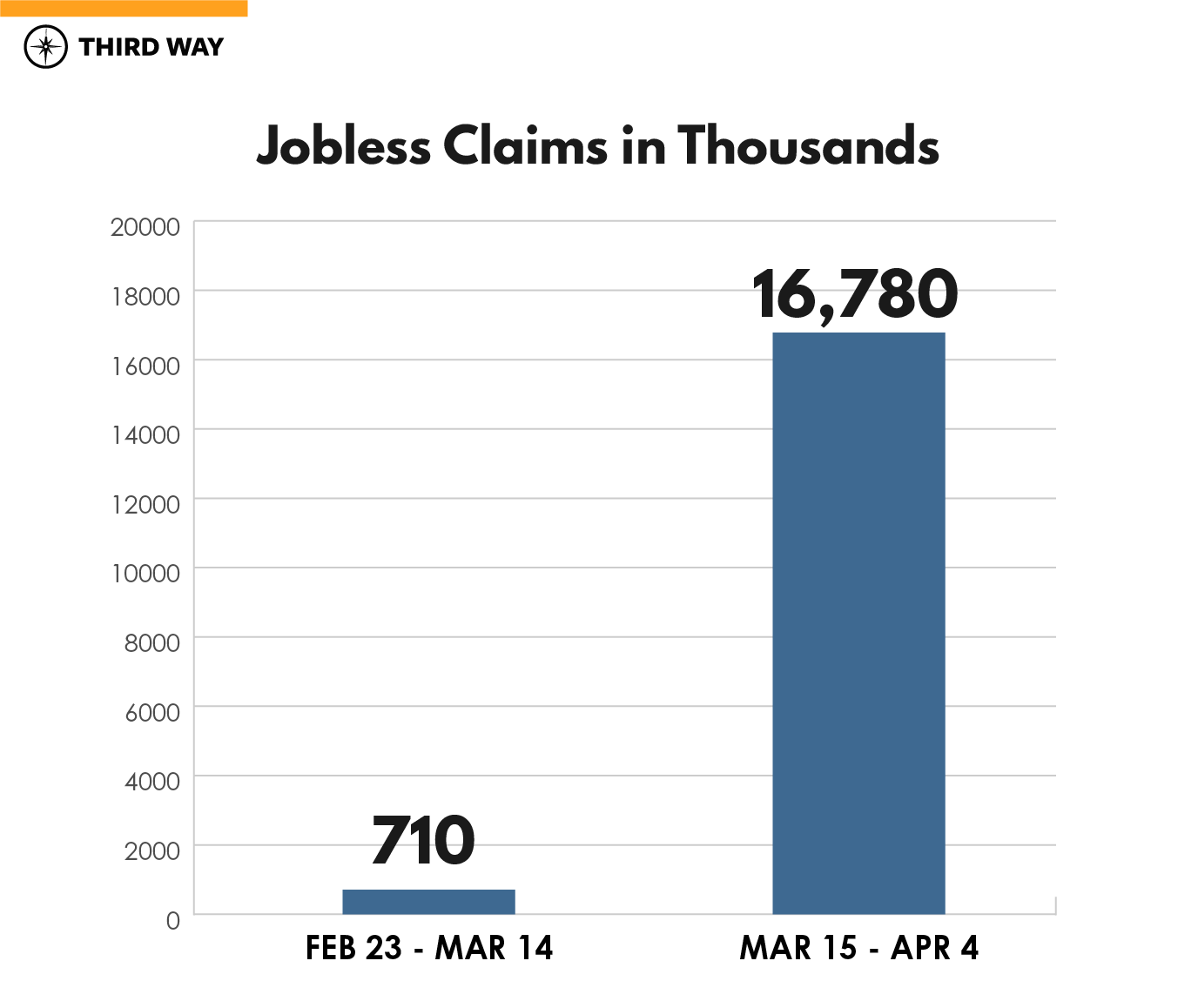 Today we are going to highlight the industries getting hit in this initial wave of job cuts, and then speculate on where the next wave will land. This will help to inform policymakers about how to target support for workers and businesses. Key to this second wave will be the large employers in the economy.

Across the country, shops, restaurants, museums, and parks have closed. By some estimates, over 25% of the economy is shut down. As businesses have little to no access to customers today or in the coming months, an abrupt wave of massive layoffs is taking the economy by storm.

A big share of the layoffs last month was concentrated at restaurants and travel-related establishments. The table below ranks the industries by the size of the job losses last month, showing all industries with 10,000 job losses or more. These are data published by the US Bureau of Labor Statistics here. Some of the most impacted industries include employment services, education services, and social assistance including daycare centers and other childcare services. The shutdown hit lower wage jobs in many sectors disproportionately.

Massive job losses hit small businesses the hardest in this first wave with over 400,000 dropped from restaurants and bars in just one month. 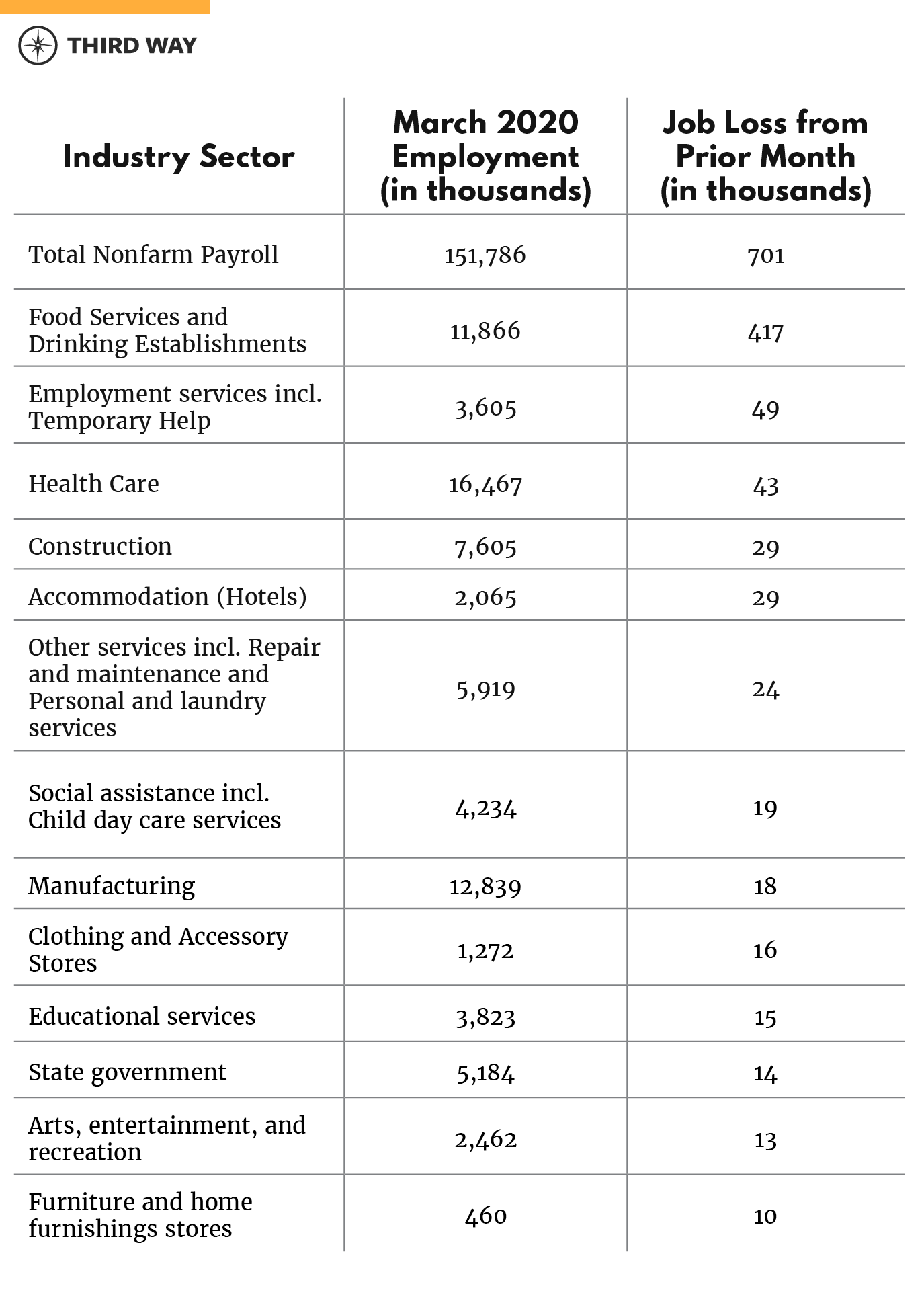 The wave of job cuts in last month’s jobs report is only the beginning. The March jobs report highlighted a pure shutdown impact for part of the month. Going forward, other industry jobs will be impacted as the recession takes hold and there is less income that households have to spend. Companies are draining cash and, even with government assistance, they will find that demand for their products and services will not be what it was in the pre-COVID period.

On net, due to the loss in jobs and revenue across the country, weaker demand will spur even higher unemployment.

Anticipating which industries are next is complex, but using some rules of thumb may be helpful. Many industries are highly dependent on economic growth, consumer and business confidence, as well as household income. Some of these include construction, autos, chemicals and basic materials, steel, and electronic manufacturing. These industries have typically suffered in previous recessions as well.

The chart below highlights what could be viewed as vulnerable industries as the recession gets under way and illustrates the jobs in these industries that are at risk. Several of these industries employ millions of workers. While aerospace is being helped by the CARES Act, none of the other large employers have received assistance yet through Congress. It is true, though, that the Federal Reserve lending facilities will offer support for corporate bonds as well as other types of financial products important to the functioning of large companies. 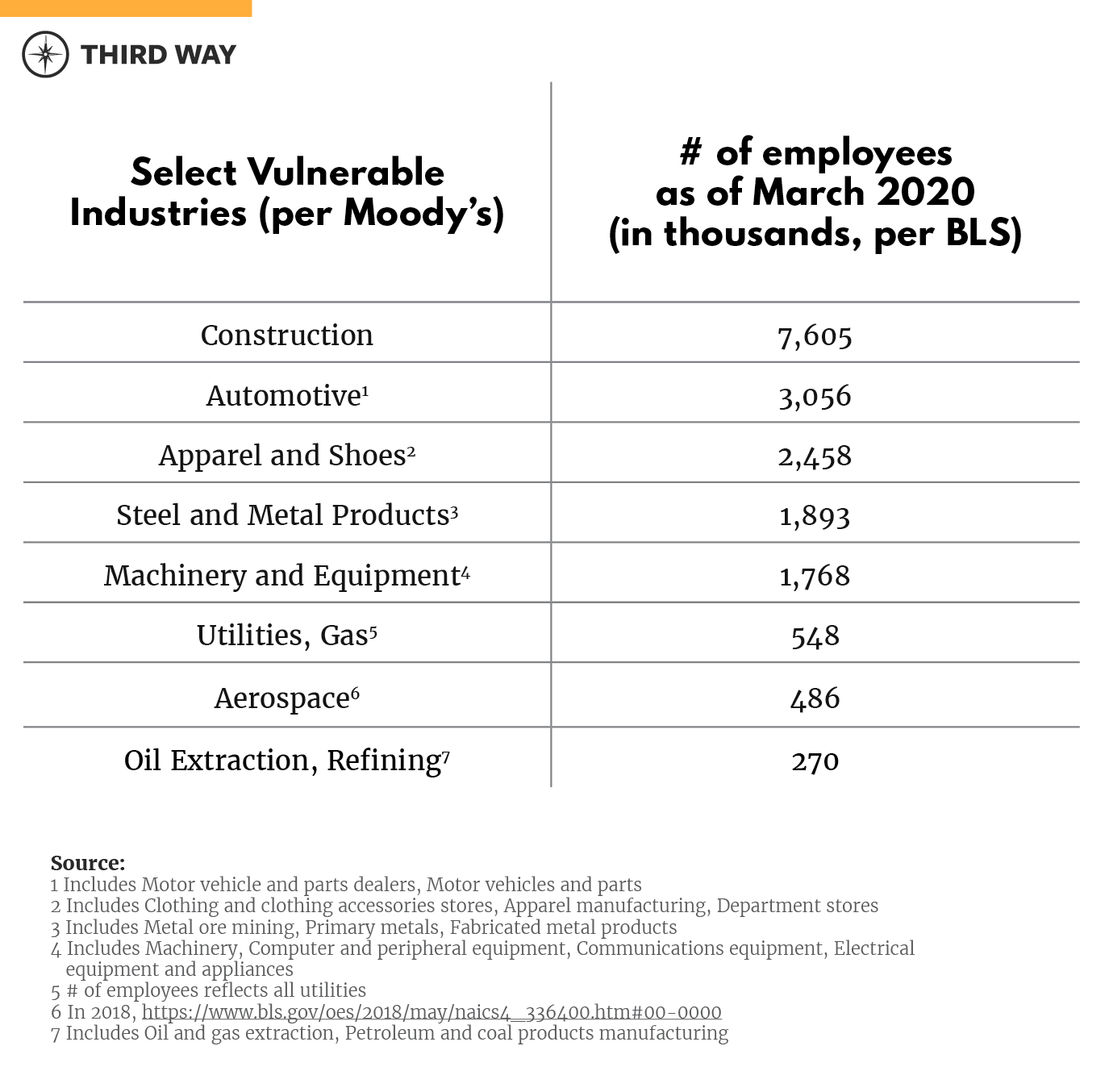 The stock market performance of companies in these vulnerable industries is also poor. Some of these companies have seen a 50-70% decline in their market values. One thing to keep in mind is that across and within industries there is a wide variance in the financial cushion that companies can depend on.

What Happens Next? No One Knows

Health experts anticipate further measures which may still impact our economic life. They highlight the importance of testing, contact tracing, and establishing an understanding of who is immune in the community. This is all to say that experts believe “back to normal” activities cannot really be achieved without a vaccine. But no one knows when and how this will happen.

The Federal Reserve actions highlighted in prior blogs, as well as the CARES Act and future policy actions are supportive in the meantime. What we do know is that more help is needed fast.

Staying One Step Ahead: Anticipating Ripple Effects and Having a Plan

Much like with confronting the virus, we always must think one step ahead. We should do things that in the present seem like an overreaction but that’s because we are anticipating what’s coming next. Here are a few guidelines:

Think big and think broad. A first course of action is to recognize that although the CARES Act is a great step in the right direction, it isn’t enough. Thinking that this will only impact the sectors that are suffering today is probably shortsighted. The impact of the recession will reach a broad array of sectors, so our economic interventions need to be equally broad and far reaching.

Think about “life support” policies first, recovery policies can come as we start to see success in dealing with COVID-19. A second part is that at least a substantial chunk of the recovery policy package includes direct transfers and tax credits for payroll expansion to keep companies and jobs afloat. Further relaxing of requirements on loans is also crucial as many small businesses live payroll to payroll. In parallel, an ambitious public health plan is needed (we suggested such a plan earlier this week) and only after we start seeing results can we think about how to truly rebuild our economy, generate 21st century jobs, and come out stronger than before.

We are optimistic that with the right policy measures, especially those that tamp down and eventually eliminate the coronavirus, government leaders can mitigate the risks of the recession on families hit hard by job losses. Speed is critical—the longer everyone waits for effective solutions, the more economic challenges will mount. That policymakers acted so quickly—both at the Federal Reserve and in Congress—is testimony to the vim and vigor needed in the days ahead. Running shoes all around!