Enriched uranium fuels are the lifeblood of our nuclear reactors. For civilian nuclear power, these fuels are typically characterized in two classes: low-enriched uranium (LEU) fuel used to power conventional light water reactors (LWRs) and high-assay low-enriched uranium (HALEU) needed to power many advanced reactor technologies. Russia is a major global provider of LEU fuel services and is currently the only commercial supplier of HALEU in the world. Thus, the need to secure uranium fuel supply and ensure long-term availability is even more urgent in the wake of Russia’s invasion of Ukraine. Without a reliable supply of nuclear fuel, we risk our energy security, technological leadership, and climate goals, among other national priorities.

Thankfully, policymakers are taking this problem seriously and are coming up with practical solutions. Two bills have been recently introduced in the Senate that include strategic nuclear fuel availability programs and robust multi-year funding authorizations. The International Nuclear Energy Act of 2022, introduced by Senators Joe Manchin (D-WV) and James Risch (R-ID), is a broad bill designed to promote international use of US civil nuclear technology and counter global reliance on Russia and China. The Fueling Our Nuclear Future Act, introduced by Senator John Barrasso (R-WY), specifically targets the establishment of domestic HALEU enrichment capability and the availability of HALEU for the upcoming Advanced Reactor Demonstration Program (ARDP) demonstrations.

This blog identifies the key fuel provisions within the nuclear bills and highlights the significance of these fuel investments to the nuclear fuels supply chain. 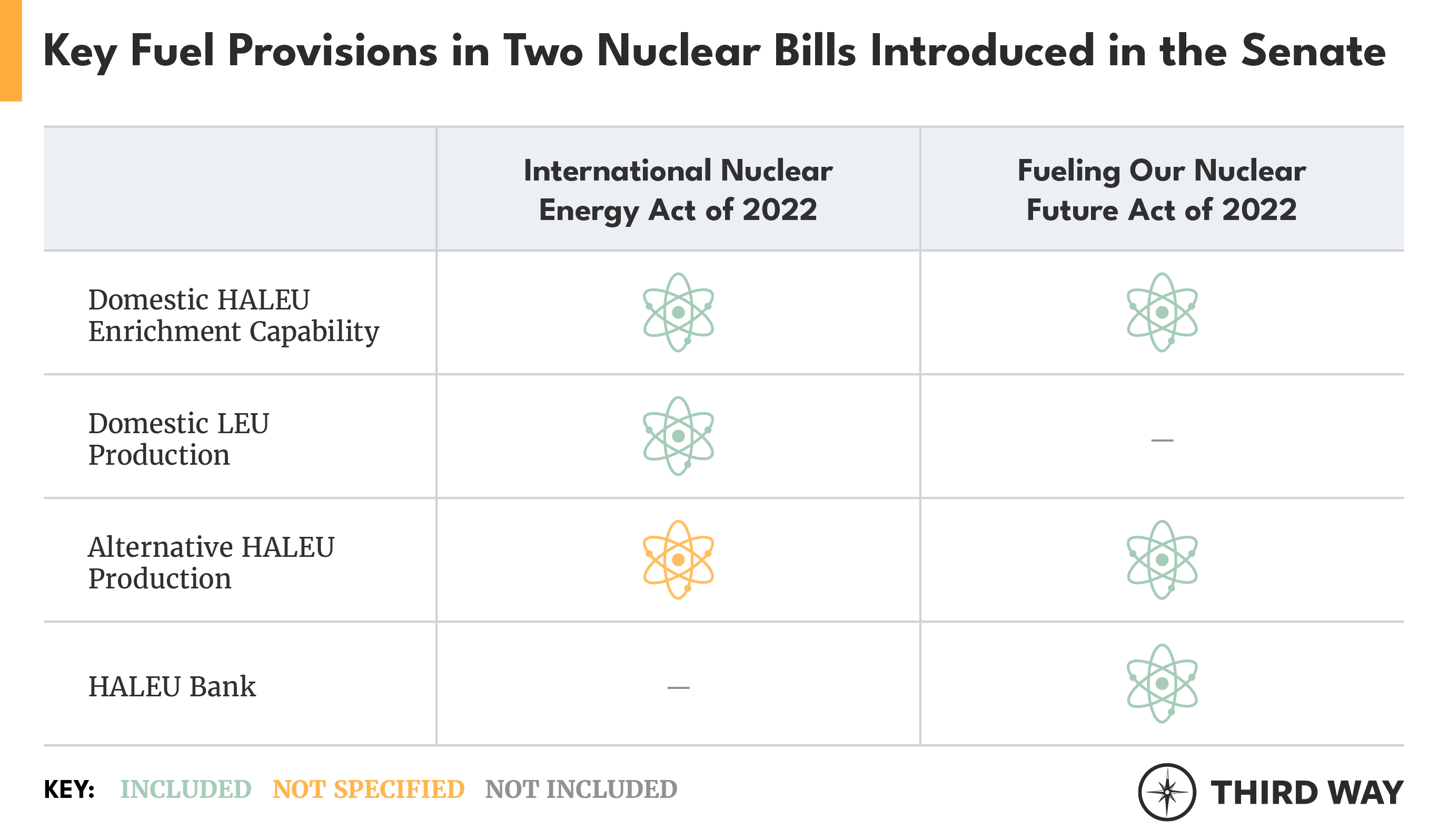 The US Department of Energy (DOE) has the facilities, personnel, and expertise to deliver the assistance on advanced nuclear fuels that is needed, but Congress appropriated just $45M in FY22 toward building domestic HALEU enrichment capability. Third Way recommends at least $300M in FY23 funding for DOE’s HALEU availability program to aggressively scale enrichment activities to meet the fuel needs of our first advanced reactor units, including the two leading ARDP demonstrations. Both the International Nuclear Energy Act and the Fueling Our Nuclear Future Act would make at least $350 million available annually for domestic fuel cycle infrastructure and HALEU production. A major benefit of the International Nuclear Energy Act is its complete authorization of fuel program funding in FY23, which would allow DOE to make immediate and robust investments in accelerating fuel-cycle development.

International Nuclear Energy Act: Establishes the “Nuclear Fuel Security Program” with $3.5B authorized in forward funding, available through FY31, for developing both domestic HALEU and LEU fuel cycle capabilities through DOE. The bill provides discretion to the Secretary on how this funding is prioritized for each fuel source.

There are currently 93 operational LWRs in the US with an average refueling cycle of 18 to 24 months. Given the volatility of the global uranium supply chain due to significant Russian influence, action is needed to secure the long-term availability of LEU for US nuclear plants. Despite the fact that nuclear power is utilized in more than half of US states, the vast majority of uranium used in US reactors is converted, enriched, and imported to the country—of which almost half comes from former Soviet Republics. Urenco USA operates the only commercial uranium enrichment facility in the US, located in New Mexico. New funding for domestic LEU production will help ensure domestic fuel availability for the continued operation of our existing LWR fleet.

International Nuclear Energy Act: LEU and HALEU are both addressed under the scope of the “Nuclear Fuel Security Program” the bill establishes. Part of the $3.5B in combined funding for these fuel sources would be used to pursue solutions for LEU production. These funds could be used to expand domestic fuel cycle infrastructure and greater procurement of uranium from allied countries.

The US has invested billions of dollars in swiftly developing advanced nuclear projects through the ARDP. These demonstrations are targeting deployment by 2028—meaning many of these reactors will need initial core loads of HALEU by 2025, or even sooner. Lack of HALEU availability would induce costly delays in bringing the ARDP reactors online, cause workforce disruptions, and jeopardize the acceleration of the US clean energy transition. As standing up domestic HALEU enrichment capability could take several years, we urgently need interim solutions to produce the initial fuel for these reactors.

Downblending of high-enriched uranium (HEU) is being explored by the DOE as an option for developing HALEU from existing uranium fuel inventories and is expected to be part of DOE’s upcoming assistance plan on nuclear fuels. DOE’s HEU is managed by the National Nuclear Security Administration (NNSA) and earmarked for defense purposes. Downblending requires securing a portion of NNSA’s finite HEU stocks and mixing the material with natural or depleted uranium to reduce the concentration of U-235 to the desired levels for HALEU fuel fabrication. Due to the complexity of the process and the need for highly sensitive uranium products, downblending would require significant funding, likely as high as $200 million, to produce enough HALEU to meet near-term demand.

International Nuclear Energy Act: Does not specifically authorize funding for alternative HALEU production. However, the bill empowers the Secretary of Energy to use Nuclear Fuel Security Program funds for any actions “necessary and appropriate” to achieve the program's goals thus creating potential for alternative solutions.

Establishment of a HALEU Bank

For broad deployment of advanced nuclear technologies, US developers must be able to guarantee access to a reliable source of HALEU for their reactors in their sales packages. The catch is that potential HALEU producers are unwilling to invest in such fuel cycle capabilities until there is a demonstrated market demand in the form of fuel contracts from developers.

A HALEU bank that is funded, at least initially, by the US government would help spur the supply chain for the advanced nuclear fuel by assuring fuel availability at a preset price to support potential reactor sales and financing. There are multiple approaches to how a HALEU bank could effectively function. Third Way recommends that DOE consider implementing a “savings account” style HALEU bank. In this approach, DOE would commit to procuring a large enough quantity of HALEU to incentivize domestic companies to invest in expanding fuel cycle capacity. The HALEU accumulated in the bank would enable DOE to fulfill supply needs in the event of shortages thereby creating the confidence in long-term fuel availability that industry needs.

International Nuclear Energy Act: Does not mention a HALEU bank. It is worth noting that the Manchin bill establishes a National Strategic Uranium Reserve program that would secure uranium stockpiles for future strategic usage.

We’re encouraged to see bipartisan recognition of the pressing nuclear fuel issues faced by advanced reactor developers and existing plant operators. In many ways, these two bills complement each other by focusing on near- and long-term fuel cycle solutions. Securing the supply chain for LEU is essential for the existing US fleet and will likely require increased international cooperation to address. Fortunately, many US allies could be potential partners in developing collaborative LEU solutions that promote energy independence and end reliance on Russian fuels. In contrast, the vulnerable HALEU supply chain is deeply nestled within Russia’s sphere of influence, leaving zero immediate alternatives for securing the fuel US advanced reactors will need.

Ultimately, a comprehensive solution that includes efforts to produce HALEU from existing fuels, develop domestic HALEU enrichment capability, and enable the foundations of an assured fuel supply for US advanced reactors is urgently needed. The US is at a critical juncture and must take action on nuclear fuels to realize the substantial investments we’ve made in our clean energy future through the development of flexible advanced reactor technologies, as well as protect the country’s largest source of carbon-free power—the existing LWR fleet.