As both the pandemic and economic crises rage on, it is a welcome relief to read the rational, firmly grounded climate and clean energy plan unveiled by Vice President Joe Biden this month. While some have been quick to call the plan a radical empowerment of the government, it’s quite the opposite: Biden’s plan focuses squarely on fostering investment that would finally address the major climate risks damaging our economy, the livelihoods of our communities of color, our coal miners, and our auto workers, among many others. Biden’s plan invests in new clean energy technologies, supports our workforce, and envisions funding for vital R&D at a scale that would finally signal to private investors that the US has the blueprints to lead on clean energy and address climate change.

The plan is strategic and recognizes the necessary interplay between fiscal support and private sector momentum. It incorporates all of the best tools to execute the transition to a clean energy economy, consistent with the mainstream understanding of how we can best address our climate crisis. Central to the plan is Biden’s commitment to investments in clean energy, correcting a decades-long shortfall in federal R&D spending. Remember when we all looked to investment as the engine for economic growth, as the precursor to strong and vibrant job creation? Early in the plan, the campaign identifies key pillars of investment and how federal policy can nudge the private sector in ways that can set the flywheel of growth back in motion.

We already know that the dangers of inaction are real. Last week, I co-moderated an interview hosted by the National Association for Business Economics of Federal Reserve Board Governor Lael Brainard, who also served as US Treasury Undersecretary from 2010–2013. When I asked Governor Brainard about the Fed’s role in examining the risk climate change poses to businesses and financial stability, she called it “quite significant risk” to the US economy.

Biden would address this risk with a strategic set of mitigative actions that renew momentum for new, good-paying American jobs. It could not come at a better time: as of July 4, nearly 32 million people are receiving some form of unemployment insurance amid this persistent and damaging pandemic.

What we didn’t get from the Trump tax cut 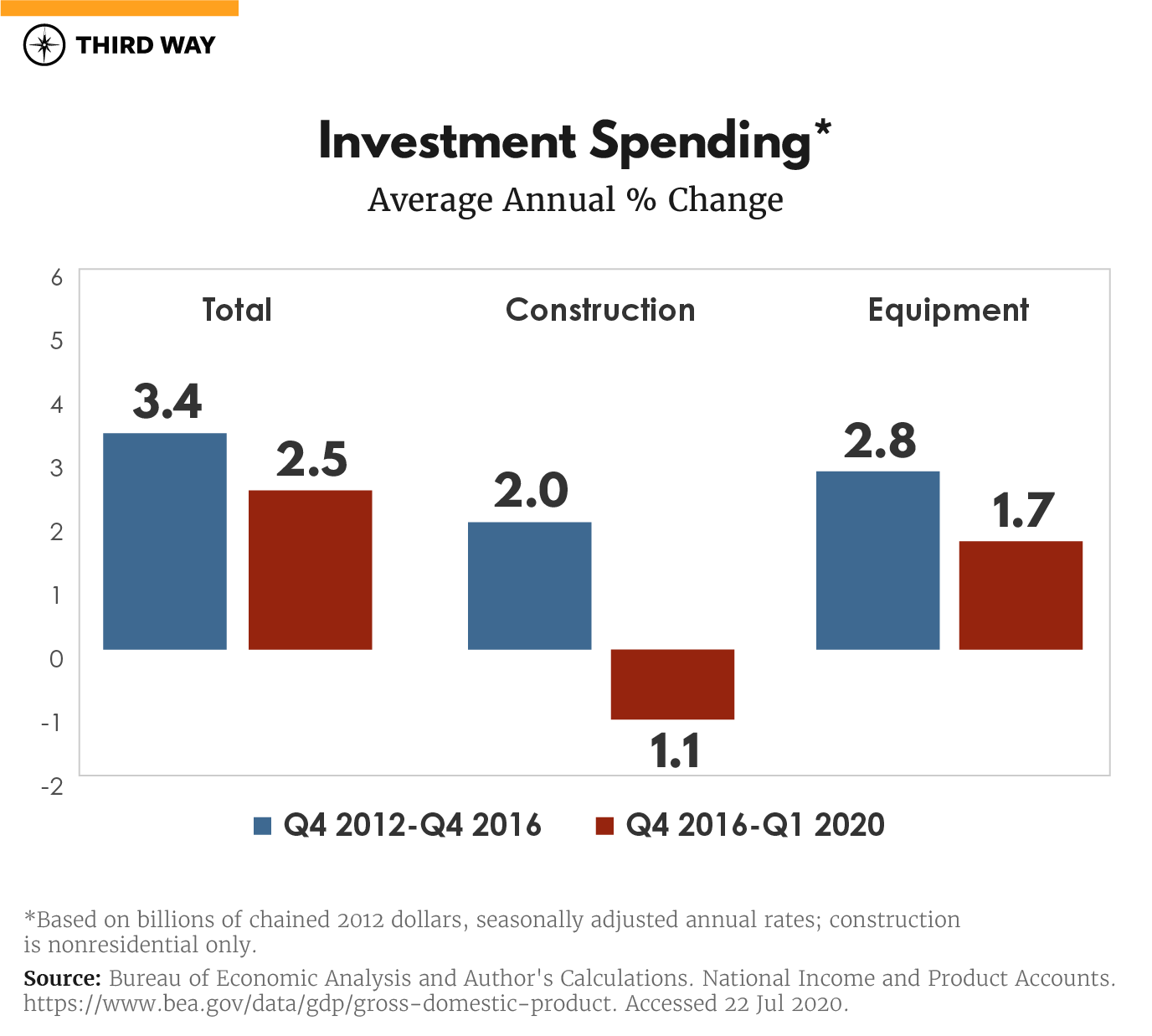 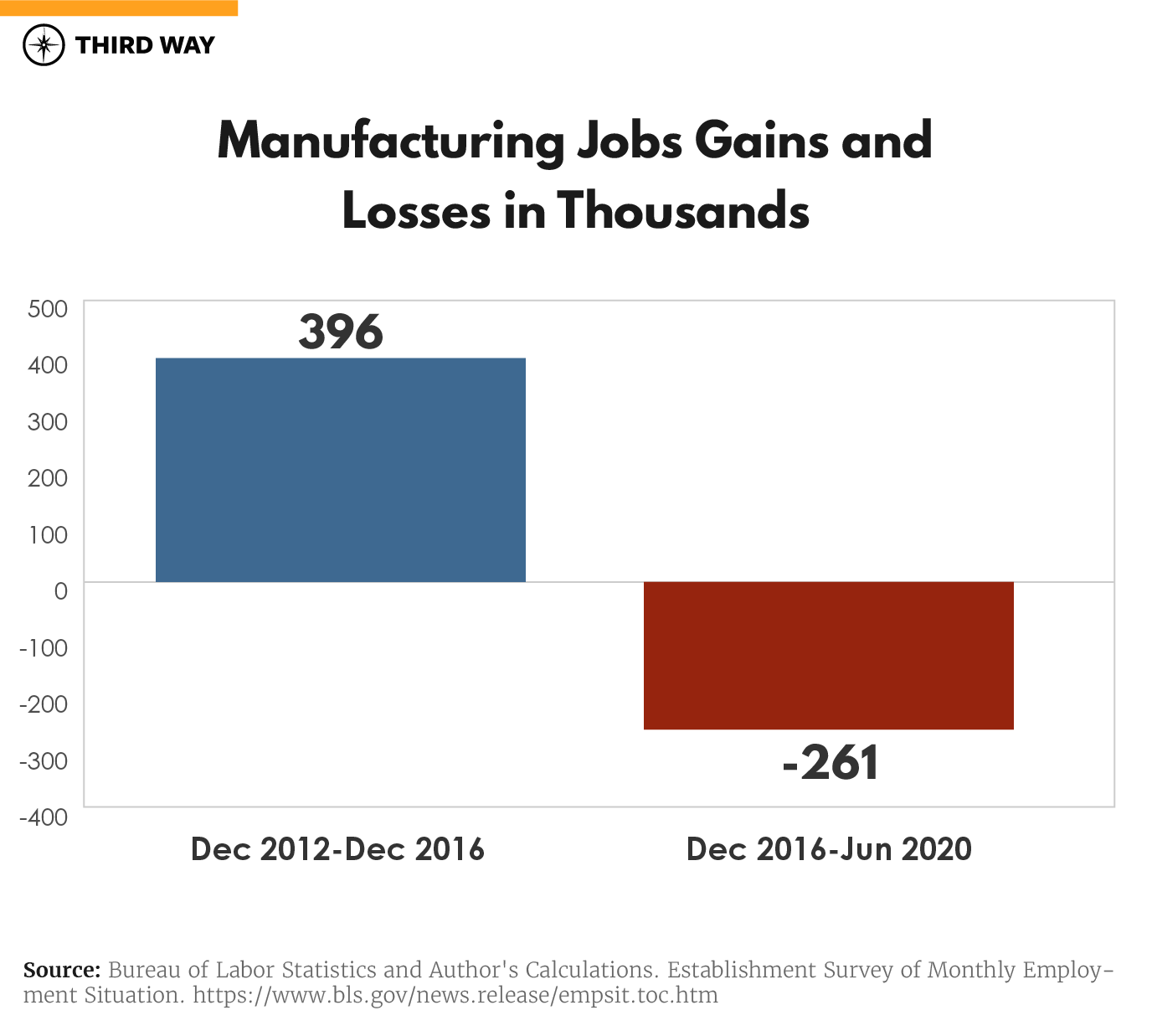 Clearly, a much bigger federal effort to stimulate investment in the private sector is needed to support the US economy, create jobs, and help us mitigate climate risks. This is why the Biden climate plan is the new mainstream—grounded in the fundamental idea that the government should help stimulate private sector investment and job growth.

Without Federal government investment in research and development, many socially beneficial projects would languish.

Drilling down to government spending on research and development, the Bureau of Economic Analysis accounts for this spending as part of “Intellectual Property Products.” And here you see a similar pattern: Even with the damage and fiscal challenges associated with the Great Recession, the average federal government R&D spending was $129 billion during 2009 – 2016. That dropped to $120 billion in the more recent period of the Trump Administration. 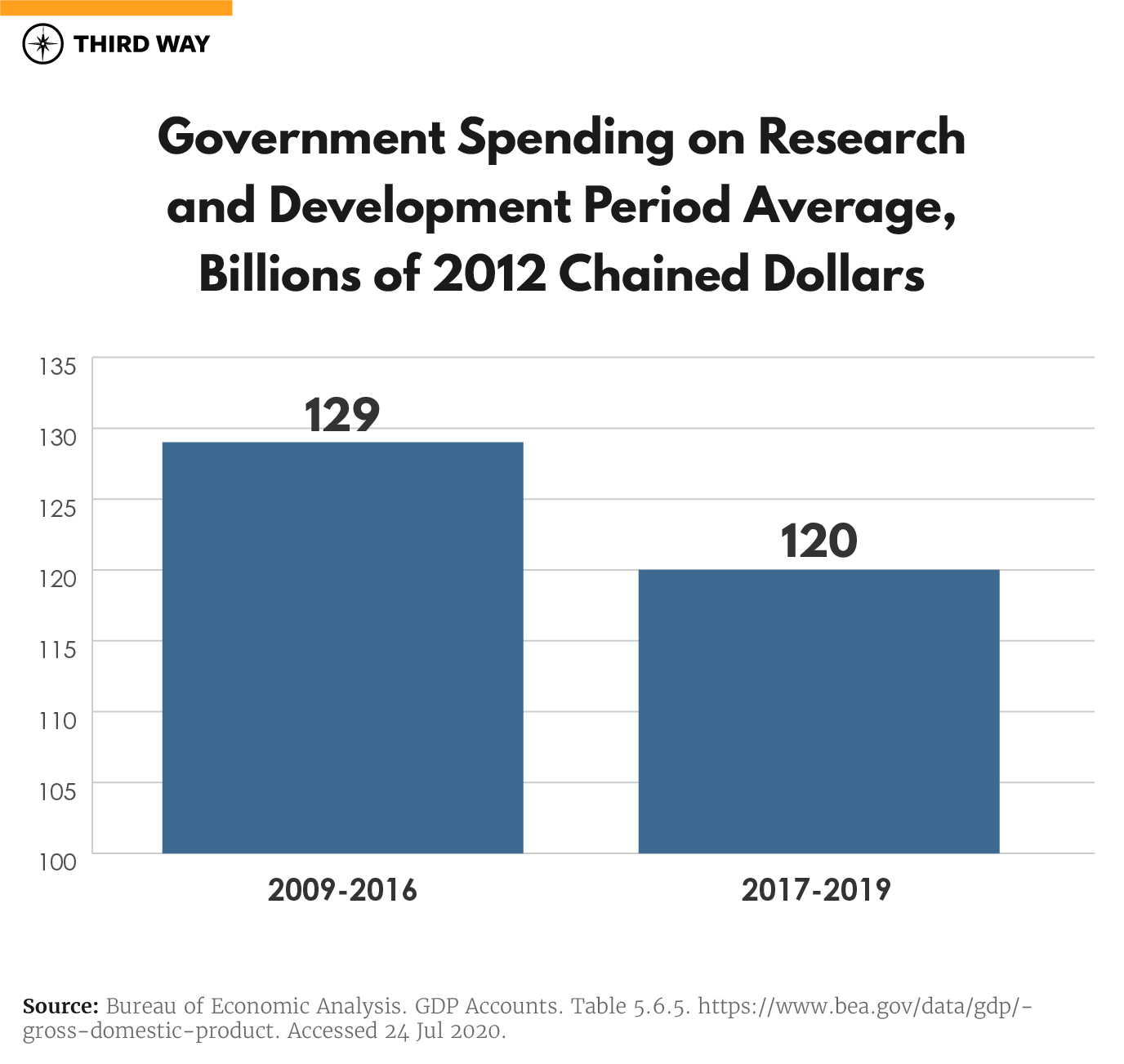 Biden seeks to reverse this trend by proposing substantial increases to government-funded R&D, including more funding for our national laboratories, and a new federal agency modeled after the successful Advanced Research Projects Agency – Energy program at the Department of Energy. The new research arm, called ARPA-C to accelerate technology advances to deliver 100% clean energy target. To add more heft to these initiatives, the plan would secure $400 billion over four years on federal procurement of clean energy inputs like batteries and electric vehicles. Large-scale clean energy demonstration projects, like the ones highlighted in this Third Way memo, are exactly the kind of vision embedded in the Biden Climate Plan – linking investment from applied R&D to scaled up demonstration projects to job creation and a healthy recovery.

The Biden Climate Plan is significant in part because it articulates so much of what we’ve learned in recent years. We now know that sitting on the sidelines and avoiding climate action quickly escalates the costs and risks we face. Biden’s inclusion of a 100% clean electricity target acknowledges that we can avoid even higher costs and damage from climate change by accelerating our clean energy transition. An aggressive target like Biden’s means that innovation and private sector investment will need to ramp up to create a competitive edge for US businesses and workers. Meanwhile, current low-interest rates make it a perfect time to foster an acceleration in investment.

Biden recognizes that reducing climate risks accrue benefits to all of society, not just a select few at a private company or in a particular industry. His plan would restore federal R&D spending to meaningful levels that would foster additional private sector investments to get us back on track in addressing climate change at the necessary scale and speed.