What Build Back Better Means for Families in Every State

Democrats’ Build Back Better Act includes a series of tax cuts and cost protections that will have an outsized effect on working and middle-income families with children. We calculated what four of the most significant provisions—the Child Tax Credit, child care cost caps, expansions to the Affordable Care Act, and expansions of Medicaid—would mean for six typical families in each state and the District of Columbia.

The Build Back Better (BBB) Act provides historic and groundbreaking middle-class tax cuts and cost protections for families. Recent public opinion polling, however, found that most people thought they wouldn’t benefit directly from the legislation.1

To better understand how much families would specifically receive in benefits, we analyzed four provisions: the Child Tax Credit, child care cost caps, the expanded Affordable Care Act (ACA) premium cost caps, and closing the Medicaid coverage gap (in the 12 states that have not already expanded it) and applied it six distinct, but typical families in each state and the District of Columbia.2

For consistency, each family has two children, aged two and seven. This lets us estimate values for the child care cost caps and Child Tax Credit, both of which are dependent on a child’s age. Together, our study results in 306 representative families across the United States and their respective benefits from the selected provisions.

Not included in this calculation are the benefits families could receive such as universal Pre-K if they had a 3- or 4-year-old child, new housing subsidies, or SNAP benefits, among many others. Also not included in our analysis is that workers with no children may also benefit from a higher Earned Income Tax Credit. Our goal was not to provide a comprehensive assessment of what every family would receive, but instead provide a snapshot showing how these prominent provisions would benefit working and middle-class Americans.

Readers can hover over the map to see the value these four provisions deliver to six representative families by state. Since median family incomes for two-parent households and single mothers with children under age 18 vary across states, we show each family’s income as well as the benefit that family would receive.

The first map displays the sum of the benefits across all four provisions while the other three maps provide provision-specific metrics. The ACA cost caps and help for non-Medicaid expansions states are combined in one tab. The appendix provides further details on sources used and the authors’ methodology for calculating each benefit. 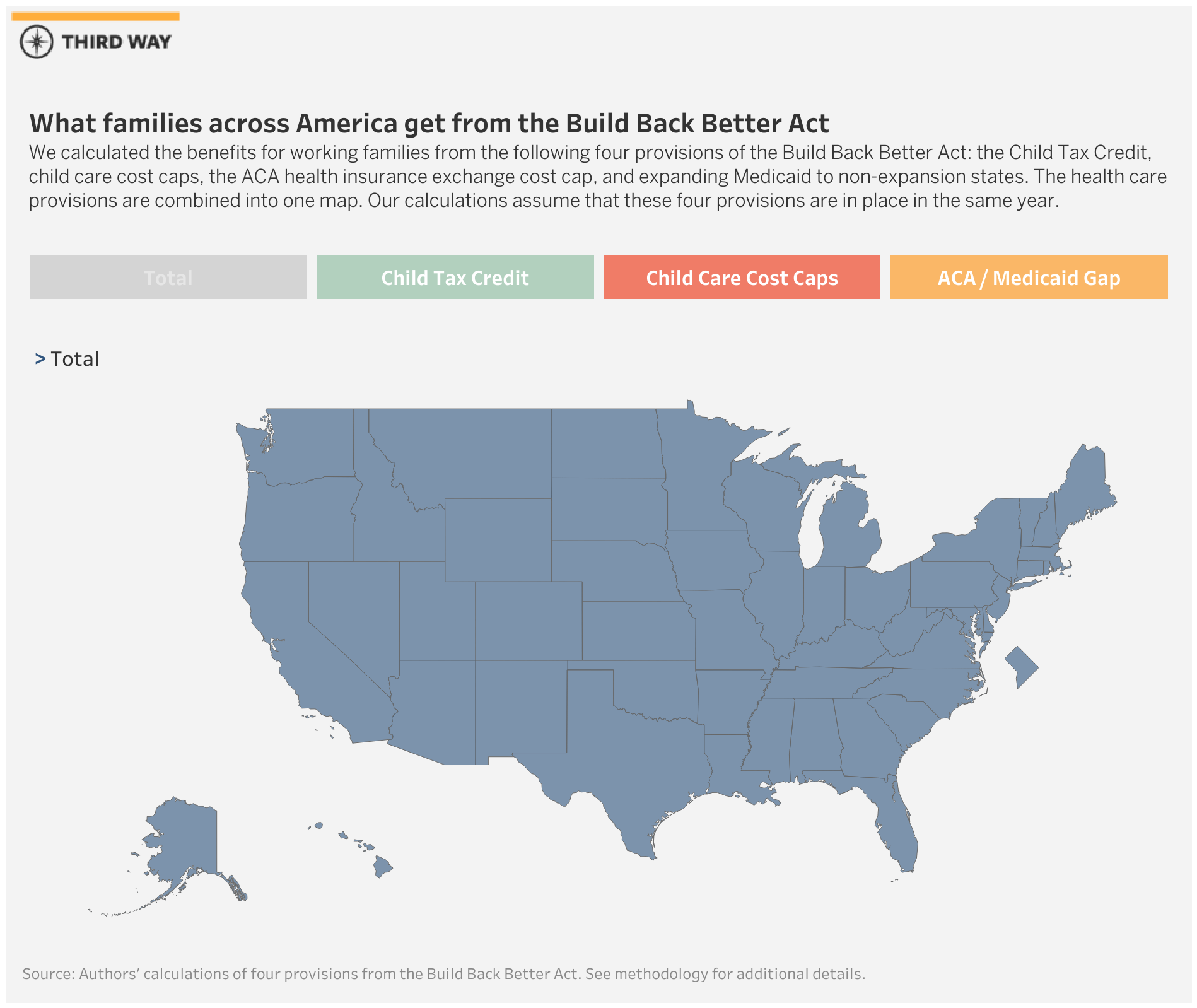 We calculated the impact of four major provisions from the most recent House-passed version of the Build Back Better Act available on November 4, 2021: the Child Tax Credit, child care cost cap, the ACA exchange cost cap, and Medicaid expansion fix. We performed calculations for six representative families across all 50 states and the District of Columbia, totaling 306 families.3

Families were composed of either two married adults or a single mother, with each household having two children aged 2 and 7 years old. Ages of the children were selected in order provide consistency, for example, while calculating the child care cost caps, which are dependent on the child’s age.

The American Community Survey’s 5-year estimate subject table for 2019 provides state-specific median income estimates for both married families and single mothers with children under the age of 18.4 We used these specific income estimates rather than the median income of a generic household in a given state. Having created a profile of the median-earning married couple and single mother with children in each state, we multiplied each respective income by 50% and 150% to arrive at six profiles for the families: married couples earning median (100%), low (50%), and upper middle (150%) incomes, followed by the same three calculations for single mothers. Together, the data results in 306 representative families across the United States and their respective benefits from the four selected provisions. Net benefits were rounded to the nearest $50.

Under the current version of the bill, these provisions start, phase in, and end at different times. For simplicity, our total benefit calculation for all provisions assumes they were in place at the same time. In calculating these numbers, we use current dollars.

The net benefit earned from the four provisions is visualized in maps using Tableau. The reader can click/hover over each state to see the calculated benefit each provision provides for the six representative families. The default map shows the sum of the benefits from each of the provisions across the six families. The ACA Cost Cap and the Medicaid expansion fix are combined in one map as only some states are subject to the changes in the Medicaid expansion fix.

The following table summarizes the changes from the previous CTC to the current law covering the child tax credit: 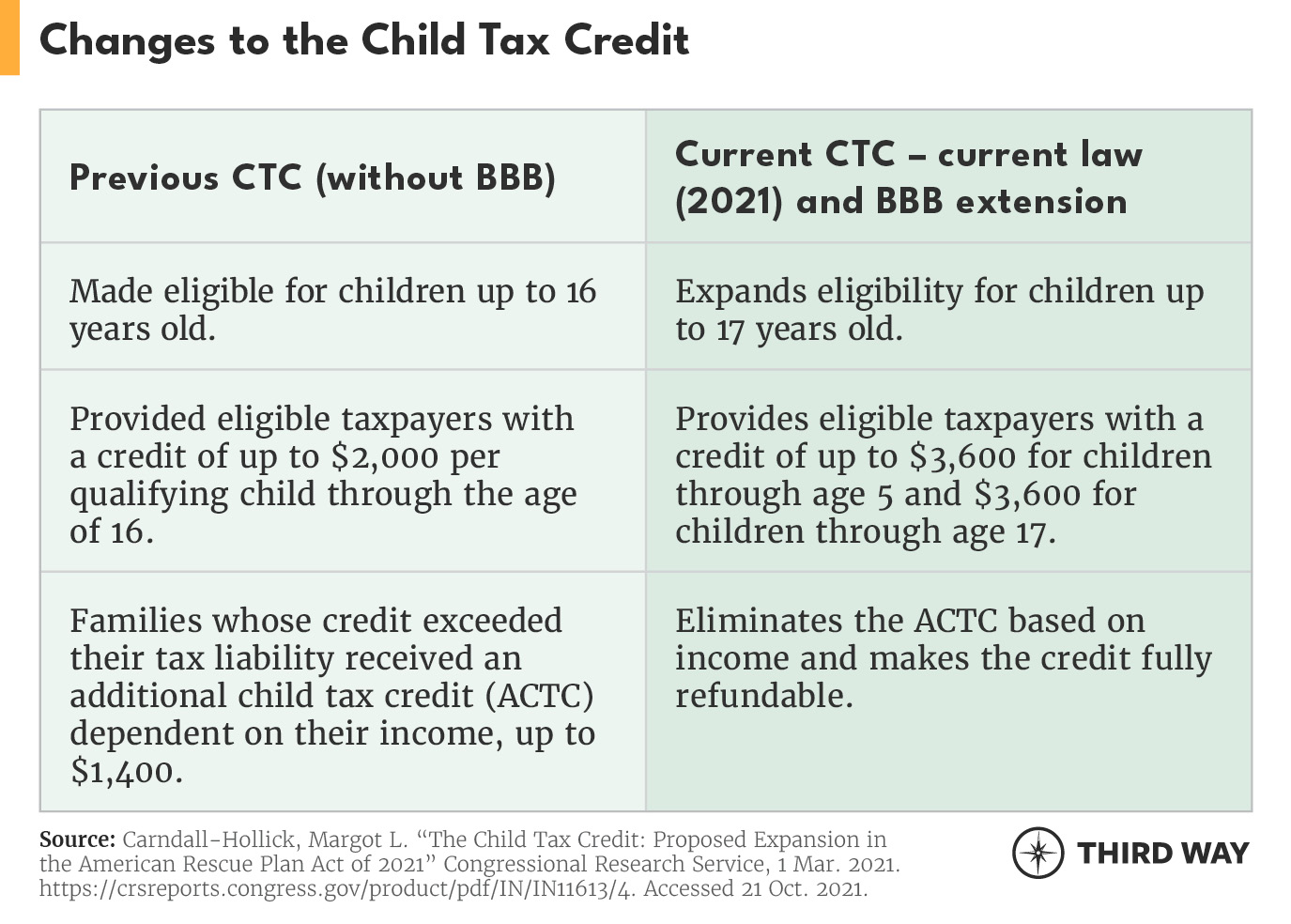 Without the BBB Act: In order to assess the child tax credit without the BBB Act assigned to families, we calculated the applicable phase-in and phase-out rates for each family based on their income.7 Taxpayers could claim a CTC of up to $2,000 for each child under age 17. The credit would be reduced by $50 for every $1,000 of income greater than $200,000. If the CTC exceeded their tax liability, taxpayers would get an additional child tax credit (ACTC) of up to $1,400. However, the ACTC is limited to 15% of earnings over $2500.8

Current law 2021/With BBB Act: This calculation was repeated for families using the rates proposed by the Build Back Better Act. New credit rates and phase-outs were calculated for all families. By eliminating the additional CTC phase-in based on income that was capped at $1,400 per child, the current law makes the CTC fully refundable for taxpayers whose credit exceeds their taxes owed. Once calculated, we subtracted the credit under the Build Back Better Act from the current law’s calculated credit to arrive at each family’s net benefit. Although not highlighted in the map, current law restructured the CTC so that it would become a monthly credit paid directly to families.

The provision for child care cost caps is designed so that families earning up to 250% of their state median income will pay no more than 7% of their income on child care-related expenses.9 We calculated the benefit from the provision by comparing the average cost of a family’s child care expenses before and after cost caps go into effect. Cost caps are only eligible for children through age 5, meaning that only the 2-year-old in our representative family is eligible. Further, the bill phases in the cost cap over six years. Our calculations assumed that the policy is fully phased in.

Child care expenses by state were collected from Child Care Aware of America’s data.10 For consistency, we assumed that our population is using center-based child care but recognize that in practice, many families, especially low earners, will likely pay family-based child care or rely on personal and informal networks for child care assistance. When other parts of the BBB Act’s child care policy are fully phased in, including investments in the direct care workforce, the benefit of the child care cap may more accurately reflect this center-based amount.

In the BBB Act, the cost cap rate determines the maximum share of a family’s income that they will be required to pay for eligible child care expenses. The bill provides the following details on the rate assigned to each family based on their income as a percentage of State Median Income (SMI):12

We used a sliding scale method to calculate the family’s rate within a bracket, as opposed to calculating the upper or lower bound rate within each income bracket. The maximum dollar amount paid by each family towards child care was then calculated by multiplying the cost cap rate by their income. To arrive at the family’s net child care savings, this number was then subtracted from the amount families would spend on child care without the assistance provided by cost caps. Since only the 2-year-old in the model is eligible for cost caps, the net benefit is a sum of the before and after school rate for the 7-year-old and the adjusted rate for the 2-year-old.

Based on the data and family profiles we used, some higher-income families were not spending more on child care than their assigned cap based on income, and thus the benefits from this cap are zero. On the other hand, using state average child care expenses for low earners, especially for single mothers, yielded high expenses in comparison to their incomes. Thus, the net benefit for these low-earning families may appear higher than usual had there existed more nuanced data for child care expenses by state and income level.

We relied on data from the Kaiser Family Foundation (KFF) and the health insurance exchange website, HealthCare.gov, to calculate the value of a cap on premiums under the Affordable Care Act through a federal tax credit before and after implementation of the American Rescue Plan (ARP). The Build Back Better Act extends the ARP cost cap and provides coverage through exchanges to low-income households that had previously been excluded because their state had not enacted the Medicaid expansion.13

A first round of data collection involved using two calculators to assess the ACA assistance for individuals before and after the ARP.14 We assigned each family the most populated zip code in its respective state, as both calculators required the selection of zip codes.15 Further, we assumed that one parent per family was applying for health insurance through the ACA exchange, and that in the case of married couples, coverage was not available from either their spouses or their own job. We also assumed that neither the parent(s) nor children smoked tobacco, a required question in both calculators. Finally, we assumed that every parent was 35, in line with the age used for examples on HealthCare.gov and only three years lower than the median age in the United States.16 We acknowledge that premiums for younger parents would be lower and premiums for older parents would be higher.

The calculators allowed us to determine assistance for all but 64 of our 306 representative families. For 53 families, the calculators determined they were eligible for Medicaid before and after the BBB Act and thus didn’t have any change in assistance. The remaining 13 low-earning families lived in one of the 12 states where Medicaid has not been expanded. To determine the value of assistance provided under the BBB Act, we used the lowest cost gold plan in the corresponding zip code for each family available through HealthCare.gov. While a more costly platinum plan would be closer to the benefits they will receive, such plans are often not available on the market and cannot be used as a consistent marker for the value of assistance. Since these families did not qualify for any health coverage before the BBB Act, they will receive the greatest additional assistance under the BBB Act provisions. It is also important to note that our analysis is based on 2021 data while the implementation will occur in 2022.

We’d like to acknowledge David Kendall, Curran McSwigan, and Diana Sanchez who all provided invaluable assistance in the modeling and design of this report.