Democrats’ Build Back Better (BBB) Act would be a long-overdue investment in the American people, delivering support for working families, middle-class tax cuts, and overdue action on climate. But as Democrats negotiate over what will be included in the bill, there’s a void in the public debate. If voters have heard anything in this debate, it is the proposed price tag of the bill, which elevates the cost of it over what it would do for people. Because of this void, misconceptions are growing that could threaten the bill’s long-term popularity. Most voters do not know what the bill would do (or even the pieces being discussed), and this lack of awareness leaves them susceptible to Republicans’ lies and attacks that could poison support for the bill before it even passes.

To understand voters’ misconceptions, Third Way and ALG Research recently conducted a 90-minute “Remesh session”—a research tool for gaining qualitative insights at scale—with 50 base Democrats and 50 swing voters. (The findings should be read as broad and directional rather than precisely representative of the electorate.)

These findings show that most base and swing voters—72% in total—support BBB right now. But just 27% say they know “a lot” about the infrastructure and BBB bills. This void between initial support for the bill and voters’ awareness of its content is where misconceptions can take hold and undermine public support.

Three primary misconceptions jumped out in this research:

The BBB bill has initial support from voters, but it does not have resilient support yet. Voters’ low awareness of BBB leaves them vulnerable to Republican attacks that could degrade their support. Soon, Democrats will finalize the scope and content of the bill, and this will be the time to reassert the case for the bill. For now, much can be done to affirmatively address voters’ misconceptions to help brace support for the bill and preserve the opportunity for it to be an electoral asset in 2022.

Voters do not believe they will get a tax cut from BBB.

Voters love the idea of working- and middle-class tax cuts in the BBB bill. After voters in the Remesh session read a description of the bill, 78% said that they like that it includes tax cuts for the working and middle class. This sentiment is shared by 68% of swing voters and 93% of base voters. In open-ended responses, it was the most frequently mentioned positive element of the bill. 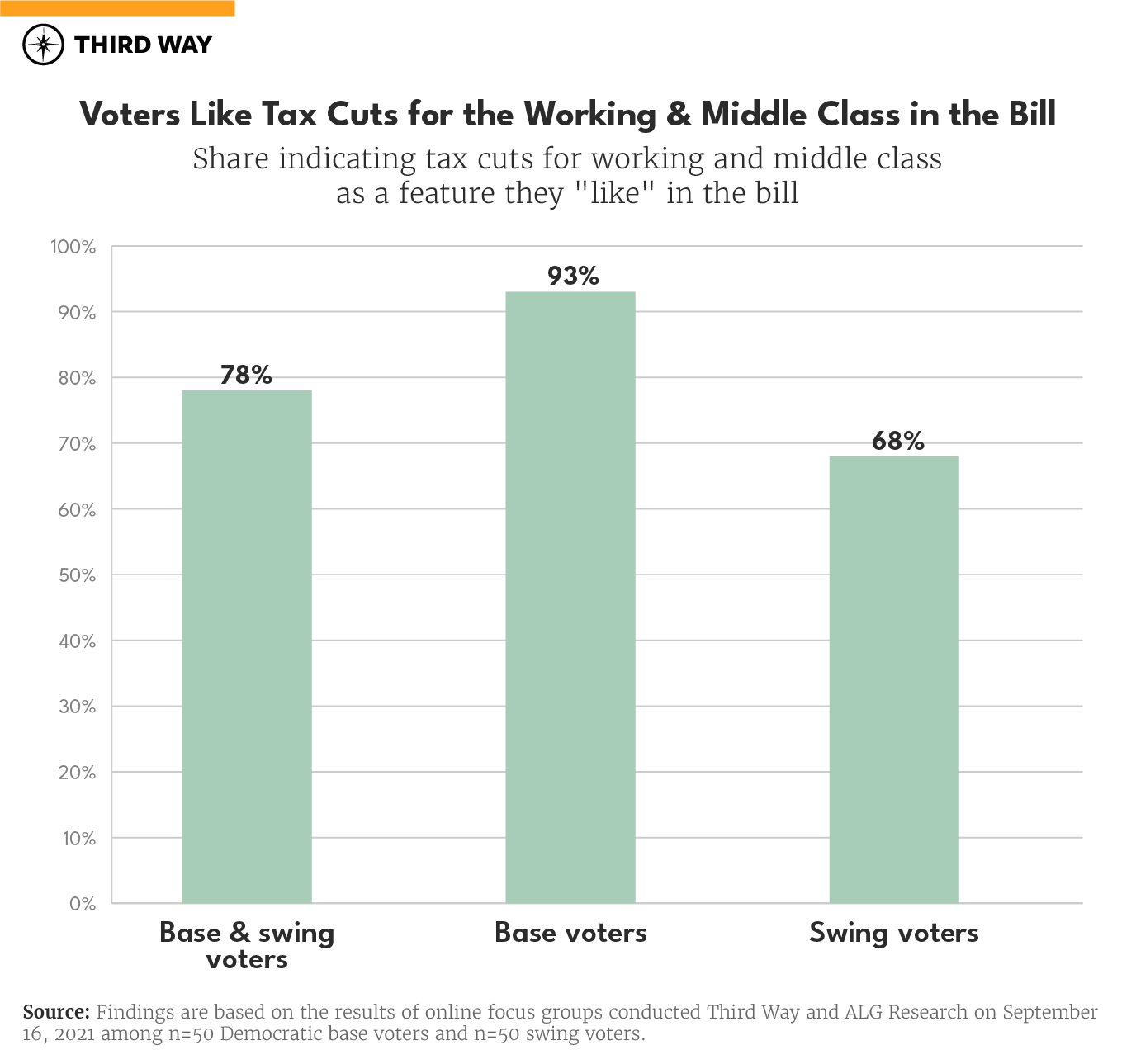 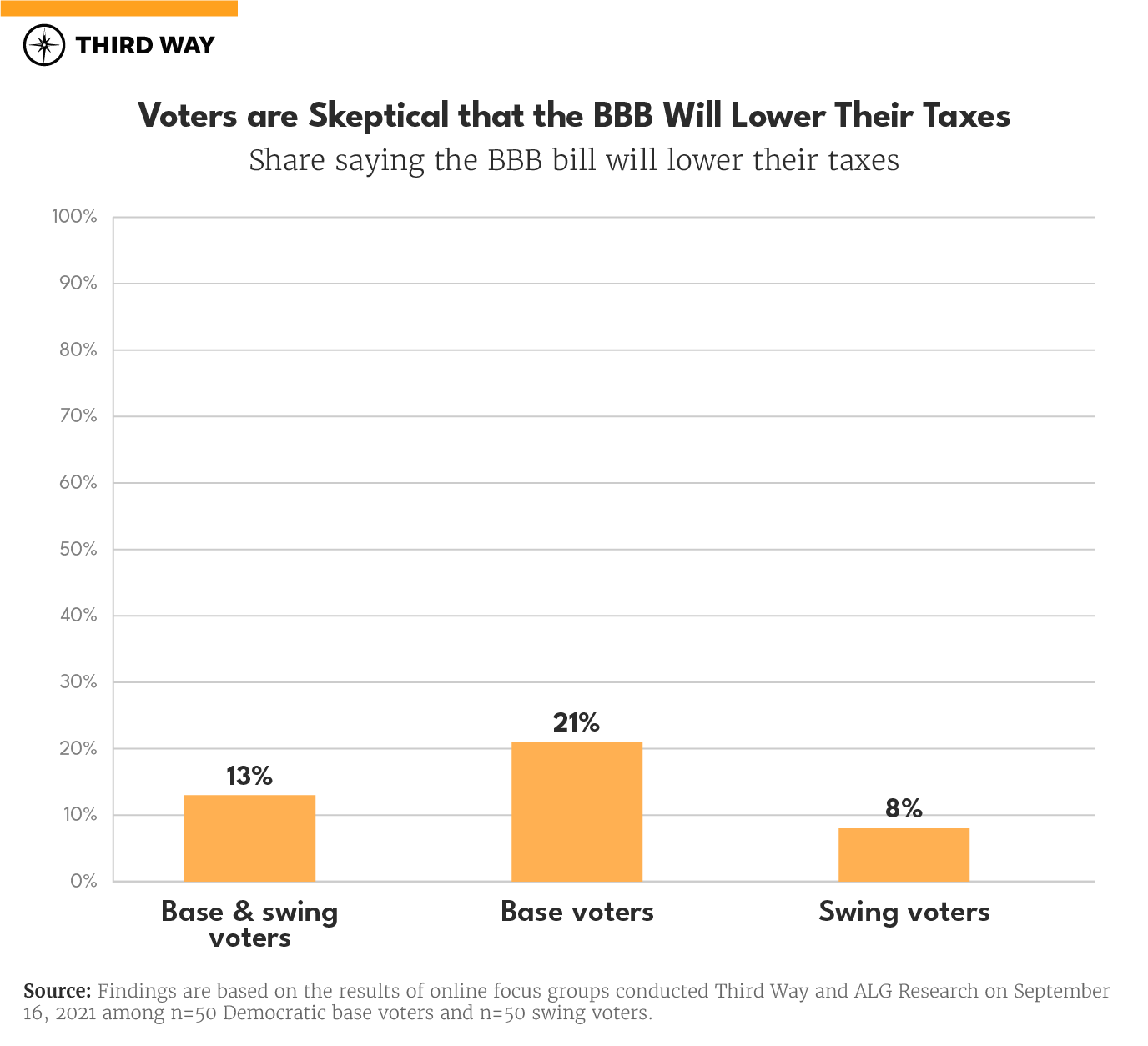 Taking on this misconception and Republicans’ lies exacerbating it requires directly addressing this falsehood. In message testing in the Remesh session, 52% said a message that the BBB bill would support working families through tax cuts and other benefits was “very convincing.” Voters need to know that there are tangible benefits for them in BBB, but they are skeptical about that right now.

Swing voters think BBB is full of giveaways and could discourage work.

There is a longstanding misconception among many voters that Democrats prioritize support for the poor over the middle class. This view has leached into swing voters’ thinking about the BBB, which could worsen their skepticism that they will see tangible benefits from the bill. Sixty percent of swing voters say they believe that the bill will lead to “handouts.” This view is mostly isolated to swing voters, with just 28% of base voters saying the same. 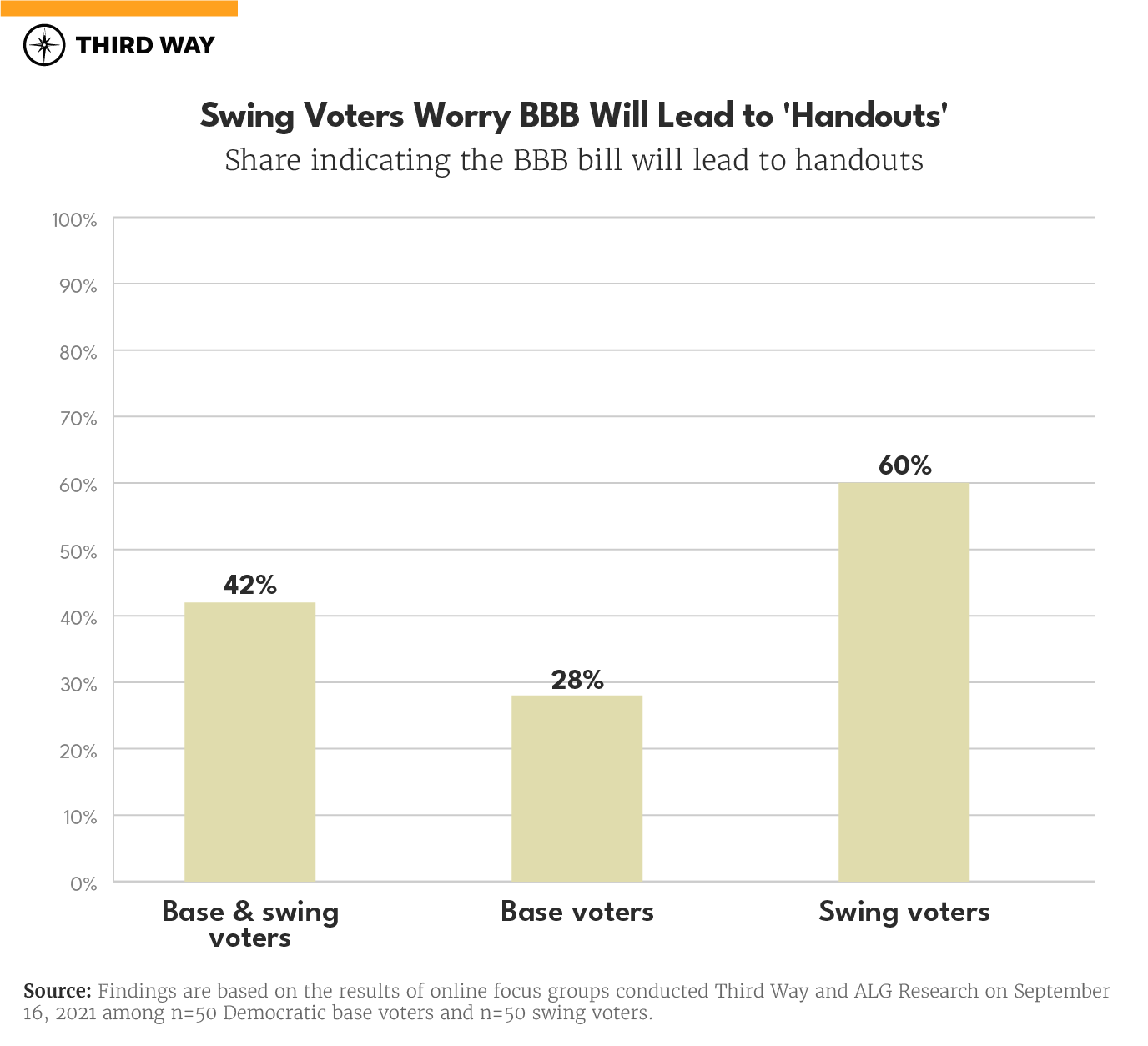 A related concern is that BBB will discourage people from returning to work. This sentiment is a holdover from the unemployment debate this summer and aligns with another longstanding misconception about Democrats, which is that the party does not particularly value hard work. Again, among swing voters, 61% say that the bill may keep people from returning to work. Only 27% of base voters share this misconception about the bill.

In reality, the bill is intended to create jobs and opportunities for Americans to work hard and earn a good life. Messages that focus on these priorities are an effective foil to the giveaways and return to work misconceptions. Fifty-one percent of voters say a message on how the bill will bring supply chains back home and create jobs is “very convincing.” The BBB bill is about empowering people, not making them dependent. Voters need to hear that from Democrats.

Swing voters believe the bill will increase the deficit.

Swing voters in the Remesh session held the misconception that the BBB bill would increase the deficit and burden future generations. This misconception could lead voters to incorrectly judge the bill’s costs as too great compared to its benefits. Sixty-one percent believe we all will have to pay for the bill down the road, despite language in the bill description that it would not increase the deficit or lead to tax hikes for those making under $400,000 a year. 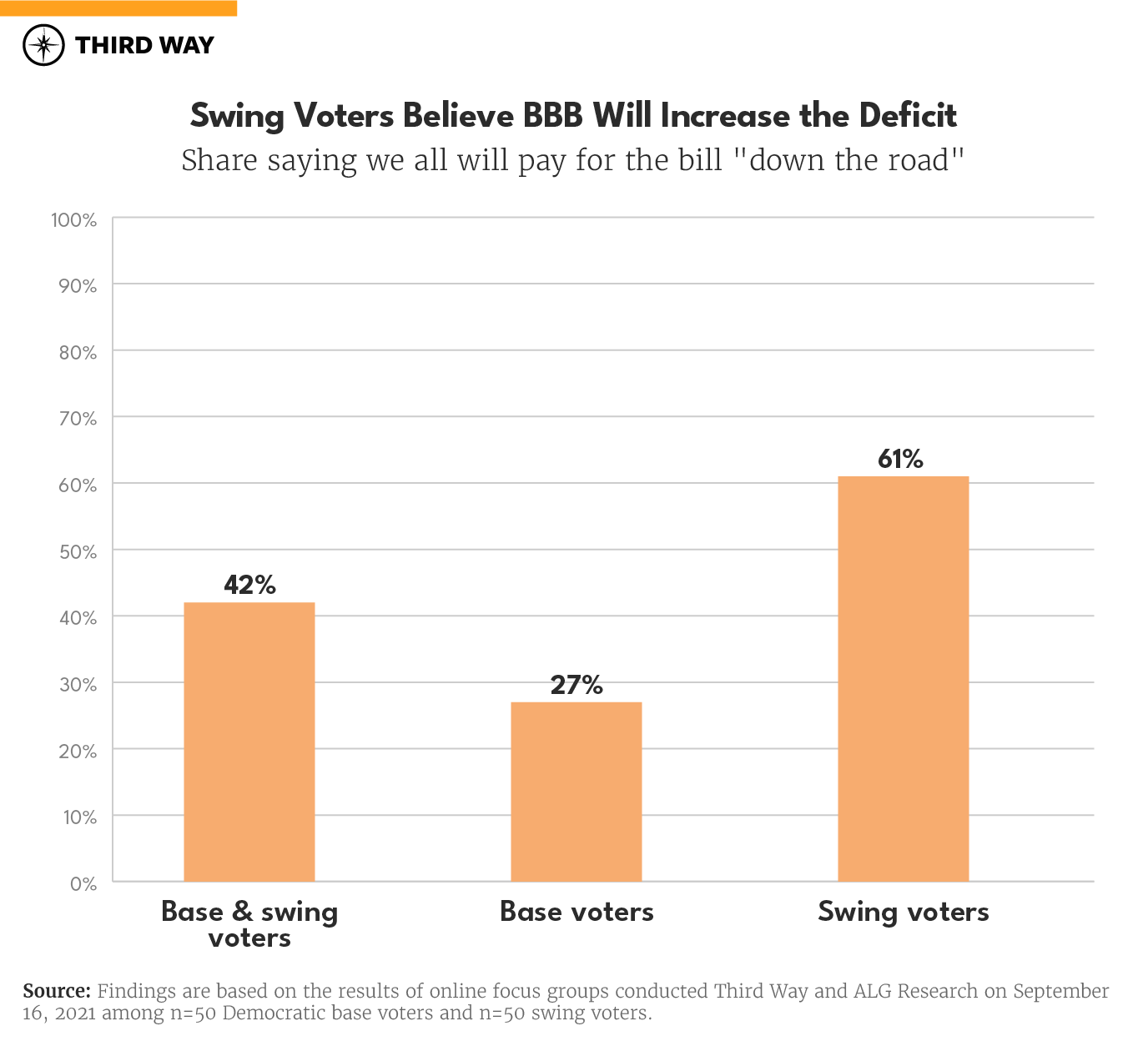 Voters’ misconception here requires messaging that addresses the effect on the deficit and clearly explains who will ultimately pay for the bill. A message that the bill will improve the long-term future of America is “very convincing” with 51% of voters. This focus on the future is an effective counter to the powerful misconception that the bill will have unsustainable long-term costs.

While it is crucial to directly confront this notion of increasing the deficit, Democrats should not overread that advice and think that the tax increases are a major selling point for the bill overall. Only 37% of voters (and 8% of swing voters) say that a message that explicitly champions taxes on the wealthy to pay for the bill is a “very convincing” reason to support it. Given the scale of BBB, it is important to talk about who will pay for it, but it’s clear that this is not a convincing substitute for what it will do to help working families.

Democrats and the media have dedicated an immense amount of time discussing and debating the overall price tag of the BBB bill. While the level of funding is important, this endless price tag conversation reinforces the sheer cost of BBB over what it would do for voters.

The void created by this debate has allowed misconceptions about the bill to take hold. After Democrats reach an agreement on the bill’s size and scope, they will have an opportunity to re-frame what the bill will do for people. In the interim, it is crucial to push back against voters’ misconceptions of the bill; specifically, the falsehoods that voters would not receive a tax cut from the bill, that it will lead to giveaways, and that it will increase the deficit. Taking on voters’ misconceptions about the bill now will buoy support for it and retain the opportunity for it to be an electoral asset for Democrats next year. 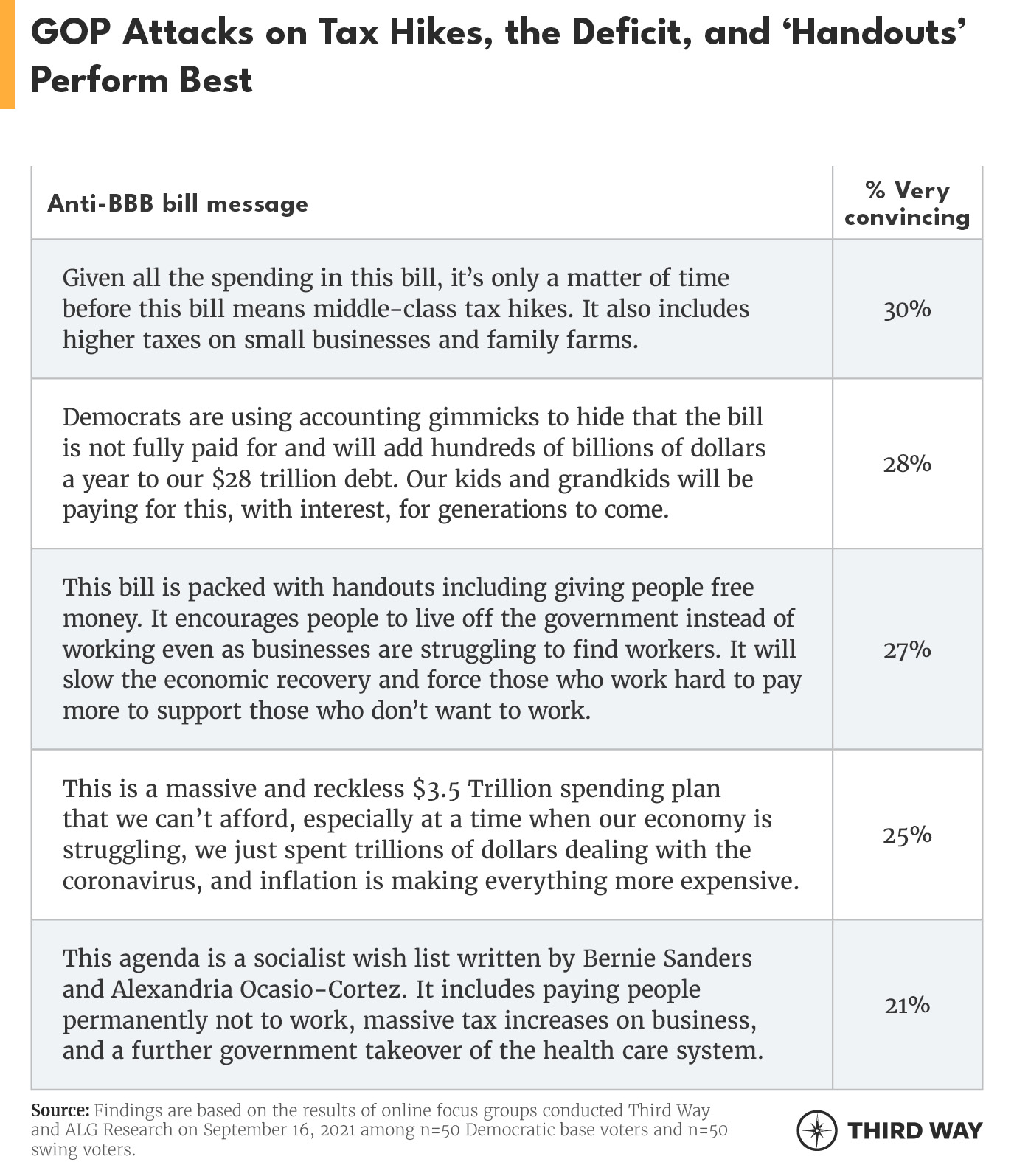 Results are based on online focus groups conducted September 16, 2021, on the Remesh platform among n=50 Democratic base voters and n=50 swing voters. Base voters were screened to be consistent Democratic voters at both the presidential level and down-ballot. Swing voters were screened to have voted for both Democrats and Republicans in the past ten years at either level. Because this is qualitative research, participants’ views cannot be projected onto the U.S. electorate as a whole.