The Virtual Loophole: A Survey of Online Gun Sales

How easy is it to buy a firearm from a complete stranger without a background check? In an analysis of internet gun sales in 10 states from a single website during the months of June and July, Third Way found more than 15,000 guns—one-third of which were semi-automatics—available for sale without background checks at any given moment. In 2,000 web ads in these states, buyers were intentionally seeking private sellers where background checks are specifically exempt from federal law. This report focuses on online sales in the 10 states where Senators were initially targeted but failed to support bipartisan legislation to close this virtual loophole. 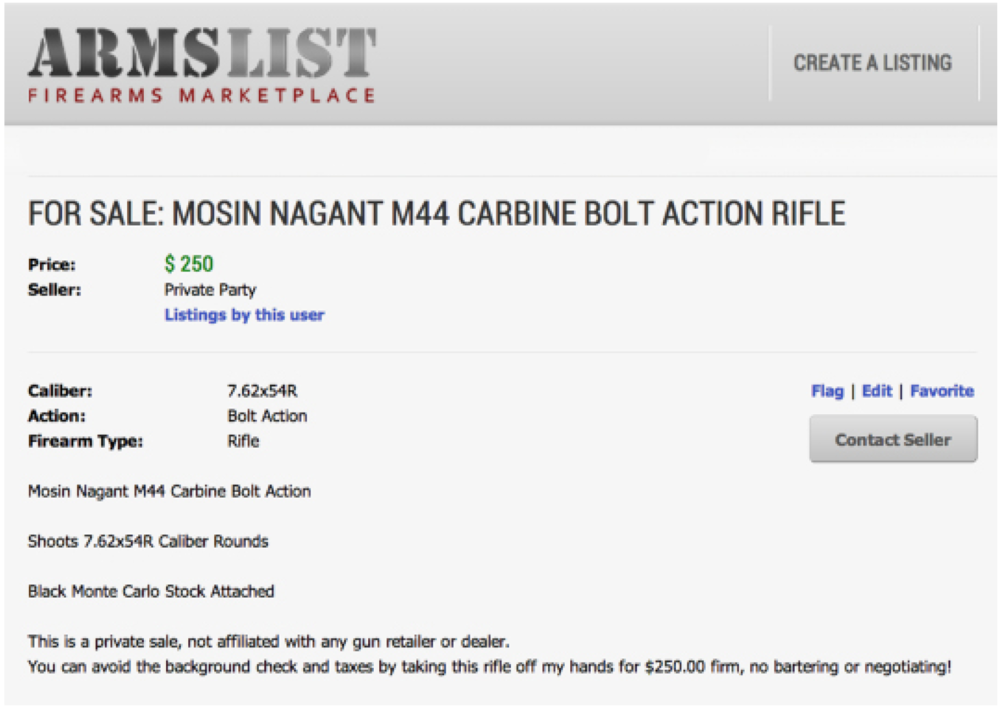 In 1993, Congress passed the Brady Law requiring that anyone buying a firearm from a gun store must undergo a criminal background check first. This law was designed to exclude prohibited buyers—such as those with felony convictions or drug addiction histories, perpetrators of domestic violence, those who were severely mentally ill, and others—from purchasing firearms.

Even after the Brady Law passed, there were always narrow avenues for those prohibited by law from owning a gun to obtain a firearm without undergoing a background check. That is because federal law only covers the sale of firearms from gun stores, not from private individuals who live within the same state as the buyer. This private sale exemption was designed to allow family members, friends, and neighbors to buy and sell guns with one another without needing to run background checks. As time went by, certain venues, like gun shows, allowed both licensed sellers and private sellers to offer firearms for sale in a commercial platform. Even though these sales occur in a commercial location, private sellers are not required to perform background checks on buyers. This is known as the “gun show loophole,” and it has been widely discussed in Washington, D.C., and nationally.

Less has been said about internet sales because they are so new. When the Brady Law was passed, the internet was home to 130 websites.1 By 2012, there were 634 million.2 This study focuses on only one, Armslist.com. Armslist.com is one of several websites that links private sellers of firearms with prospective buyers to effectively avoid federal regulations concerning sales of guns, specifically regulations requiring criminal background checks for gun purchasers.

The Magnitude of Online Gun Sales

This survey presents a snapshot of the number of gun sale listings on Armslist.com across 10 states on several random summer days.3 While Armslist.com operates in every single state, for the purposes of this study, Third Way analyzed the listings in Alaska, Arizona, Arkansas, Georgia, Montana, Nevada, New Hampshire, North Dakota, Ohio, and Tennessee—10 states that are home to Senators who voted against expanding background checks to these online sales in April. Here’s what we found:

(The full list of online gun sales from these 10 states is available in the Appendix.)

The magnitude of these sales occurring without a background check may be disturbing, but they are not illegal under current law. In April of this year, the Senate attempted to close this loophole through legislation authored by two gun rights stalwarts, Senator Joe Manchin (D-WV) and Senator Pat Toomey (R-PA). Both Senators had received an A rating from the National Rifle Association in the past, but both bucked the gun lobby to propose bipartisan legislation to close the loophole that allows strangers to sell guns without background checks over the internet and at gun shows. An avid hunter, Senator Manchin called his legislation “gunsense.”

The Manchin-Toomey legislation had the support of 55 Senators but fell short of the 60 votes needed to overcome a Senate filibuster—in part thanks to some of the Senators representing the states in this survey. The bill simply would have applied the same rules that already apply to sales at gun stores to online commercial sales like those facilitated by Armslist.com. It is worth noting that it is easy and convenient to do a background check for gun sales:

The Manchin-Toomey background check bill is expected to come up for a second vote later this year. The bill’s authors are hoping to make minor modifications to convince some Senators, like those from these 10 states, to re-think their position. This snapshot shows that each of these Senators should seriously consider doing so to keep guns out of the hands of criminals in their state.

Appendix: A Snapshot of Online Gun Sales from June-July 2013