What do Vermont, the bluest of blue states, Colorado, a purple-trending blue state, and Massachusetts, home of an all-blue congressional delegation, have in common? They’ve all failed at pursuing single-payer.

States are the laboratories of democracy. Yet, single-payer initiatives have consistently failed. These experiments demonstrate the challenges that single-payer faces—ranging from high costs to opposition from core progressive constituencies. This report examines the single-payer experience in each of the three states. It also looks at what rose from the ashes after the efforts failed and what policymakers can learn.

Vermont, Colorado, and Massachusetts each took a different approach toward single-payer, as depicted in the chart below.1 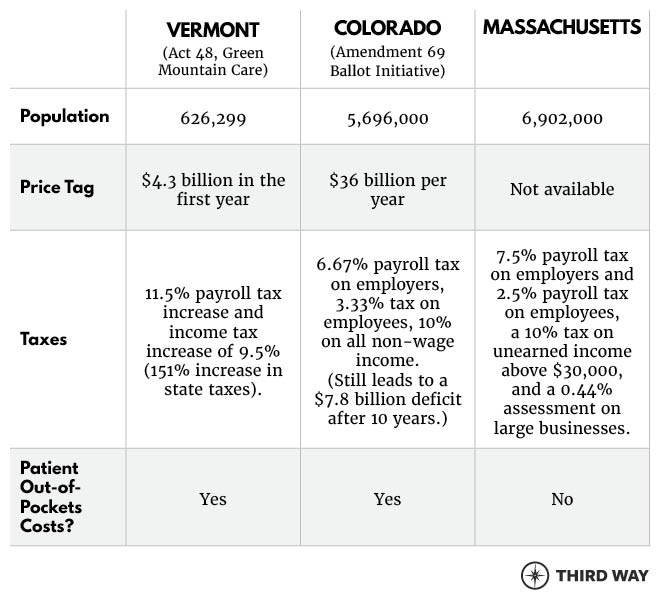 In 2011, Vermont State Senator Peter Shumlin became governor having campaigned on single-payer health care. The enactment of the ACA in the previous year made single-payer a seemingly realistic option because the law allowed states to establish innovative ways to finance and deliver health care. In his first year in office, Governor Shumlin took the state one step closer to single-payer by winning the enactment of legislation to create the nation’s first single-payer system, called Green Mountain Care. His attempts to implement the law spanned his first two terms in office (Vermont governors serve two-year terms) during which he continued to campaign on single-payer right up to his election to a third term. Despite all the momentum, Shumlin could not overcome several major obstacles, and the single-payer experiment officially ended in late 2014.

What were the obstacles and why did they prove immovable?

With single-payer dead in the state, Vermont switched gears and pursued an innovative delivery model that built on the ACA instead of replacing it. In October 2016, Governor Shumlin and the Green Mountain Care Board—the board originally responsible for implementing single-payer—released the first draft of the Vermont All-Payer Accountable Care Organization (ACO) Model, which pilots new payment models that coordinate physical health, mental health, and social services to help patients with the most complex needs. The new All-Payer ACO Model successfully builds on the existing health care infrastructure and state partners instead of trying to re-make the entire health system. Initial results from the study show that Medicaid beneficiaries are making greater use of primary care and behavioral health services, and those individuals deemed “high or rising risk” had substantially fewer emergency department visits than before the program.13

In 2016, Colorado residents voted on a citizen-initiated single-payer ballot initiative, Amendment 69. The ballot initiative would have amended the state constitution and created a taxpayer-funded, universal health plan for the state that would be operated by a 21-person elected board. This would have put all Colorado residents who currently receive private insurance onto ColoradoCare, while those with Medicare and Tricare would keep that insurance.14 ColoradoCare would cover 11 categories of health services, such as “prescription drugs and medical equipment” and “preventive and wellness services,” with no deductibles or copayments for preventive and primary care services and some cost-sharing for other services. Despite being a progressive policy proposal, many Democrats and progressives opposed the measure. With close to 2 million votes, Amendment 69 was strongly defeated by nearly 60% (79% opposed, 21% in favor).15 Not one county in Colorado voted in favor of the initiative. 16  Even in some of the most liberal counties that voted in favor of Hillary Clinton by a large majority, the ballot initiative failed by at least 20%.17 This same failure was seen in other progressive states as well. California’s ballot initiative garnered only 27% of the vote and Oregon’s initiative saw only 20% in favor.18 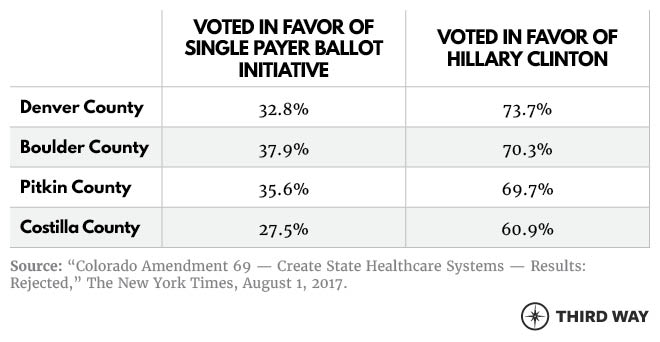 Why did the ballot initiative get defeated by such large margins?

While gubernatorial candidate Jared Polis called for a multi-state single-payer system on the campaign trail, after his election, he instead has focused on lowering health care costs for Coloradans.27 In April 2019, Governor Polis unveiled the Roadmap to Savings Coloradans Money on Health Care. The plan included passing a public option, a reinsurance program, a ban on surprise billing, expanding the primary care workforce, and increasing access to healthy food. His first action was to sign House Bill 1001, which requires financial transparency of hospitals.28

Massachusetts has a longer, more complicated single-payer story, but the ending was the same. The state has debated the single-payer idea for three decades, with the first single-payer bill being introduced in 1986. Local, non-binding ballot initiatives in support of single-payer have been passed over 20 times.29 The state also has some of the strongest advocates for single-payer. Yet, despite the support from constituents and legislative interest, the bill has never gotten out of committee, let alone made it to the governor’s desk. Furthermore, candidates who have run on a single-payer platform, such as the former acting administrator of the Centers for Medicare and Medicaid Services Donald Berwick, have not won elections.30 Despite public support, legislative action, and a strong progressive coalition, single-payer has never gotten off the ground. Why not?

Similar to the other two states, the taxes necessary to fund a single-payer bill would be huge. MassCare, a Boston-based advocacy group, estimated that single-payer could be financed with a 10% capital gains tax on unearned income above $30,000, and a payroll tax of 7.5% for employers and 2.5% for employees.31 The state’s fiscal 2019 budget totals $41.2 billion, which includes all the money used to pay for public services like fixing roads and funding schools. About 40% already goes toward public insurance programs. Adding $22.8 billion in health costs (the amount currently paid by private insurance) would increase the state budget by more than 50%.32

John McDonough, a professor of public health at Harvard T.H. Chan School of Public Health said the biggest issue facing Medicare for all is related to cost. “How are you going to pay for it?” he asked, rhetorically. “The level of taxation that would be required to replace private premiums would be seen as off the wall by most people.” Furthermore, health care costs in Massachusetts have been increasing rapidly. In the last five years, health care costs grew 21%, increasing to $61.1 billion in 2017 compared to $50.5 billion in 2013. “It’s almost impossible to find a revenue source that grows at the rate you would need to feed moderate cost growth in the health care system,” said Anya Rader Wallack, a professor in the School of Public Health at Brown University in Rhode Island.33

While single-payer has continued to stall for decades, the state has pushed forward on health care in a multitude of ways. Massachusetts passed a health care reform law in 2006 with the aim of providing health insurance to nearly all of its residents. The law mandated that nearly every resident of Massachusetts obtain a minimum level of insurance coverage, provided free and subsidized health care insurance for low-income residents, and mandated most employers to provide healthcare insurance. Many provisions of the law, such as the Massachusetts Health Connector, were used in the drafting of the ACA. 34 After the law’s implementation, 97% of Massachusetts residents had health coverage compared to just over 90% nationally.35 The reform also improved health outcomes: the state saw reduced mortality for all residents. The mortality rate decreased even more among low-income households and those who were previously uninsured.36 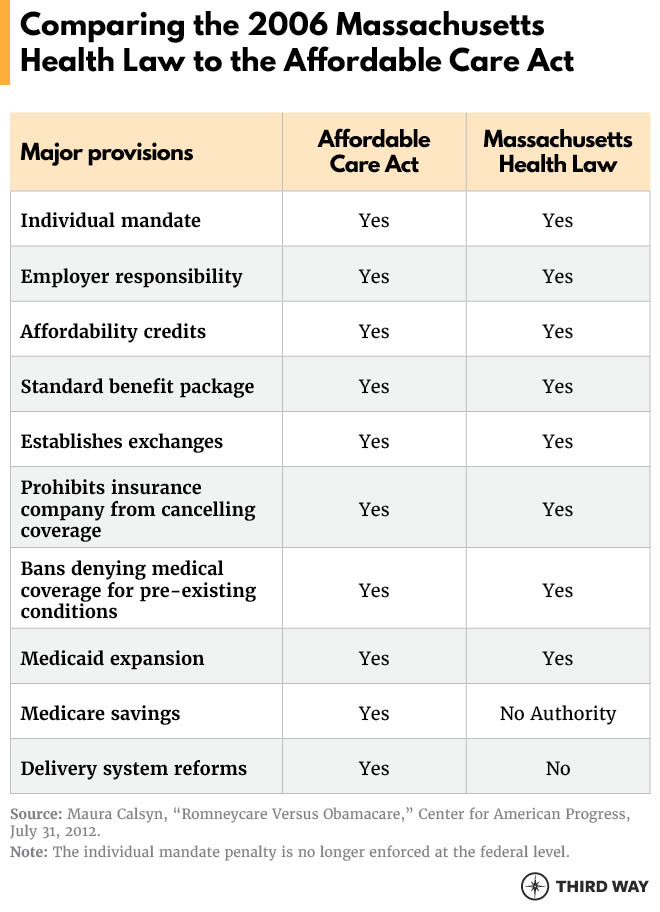 Single-payer advocates are right that universal coverage is fundamental to a successful health care system, economy, and country. However, as these states have shown, raising taxes to unprecedented levels and upending the entire health care system is not popular. So what is the alternative?

First, Congress needs to address the costs of health care. No one should go bankrupt from a hospital visit, and everyone should have access to care they can afford. But as Vermont learned, simply replacing premiums with taxes would require a huge payroll tax of between 10-25%. Further, the “taxes instead of premiums” message has failed in states from Colorado, to California, to Vermont. For example, in California, 53% of likely voters back single-payer but support drops to just 41% when they are told it will require new taxes.

Instead, let’s expand on a technique from the ACA: cap out-of-pocket costs based on income no matter where the person gets insurance. This cap can be used in Medicare, Medicaid, and private insurance so that no middle-class person would pay more than 10% of their income on health care costs.

Furthermore, the right coalitions must be in the room. Those coalitions need to be comprised of the people who use and pay for their health care. A massive coalition of consumers, unions, employers, small businesses, governors, and willing participants of the health care industry are needed to overcome opposition to change. The kernels of such a coalition are available through Consumers First, which is focused on realigning health care incentives to lower costs and improve quality.37

Third, any health policy plan must avoid a regressive impact on low-income families. A consultant on the Vermont single-payer plan said, “If you can’t do it in Vermont, with one private health plan and low uninsured rates, then the amount of disruption you would have nationally with winners and losers would be enormous.”38 Some people in this country receive free or incredibly discounted care through Medicaid and the ACA exchanges. However, under a single-payer plan where taxes are increased upwards of 10%, they would bear an undue cost burden. Instead of making them worse off, Congress should focus on the millions of people who are eligible for free and discounted care and make sure they are enrolled through auto-enrollment or one-click simplified enrollment process. And all low- and middle-income families should receive protection from high costs based on their income.39

Let’s learn from the single-payer experiments in these states. With 29 million uninsured and tens of millions more worried about health care costs, the country does not have time to waste on policies that won’t go anywhere. Instead, let’s strengthen the ACA, control costs, build strong coalitions, and achieve universal coverage.