How the Concentration of Opportunity Elected Trump

Between 2005 and 2015, the U.S. added 150,000 net new businesses. But in an economy that is moving from industrial to digital, 2,100 counties lost a total of 200,000 businesses over this time period, while just over 1,000 counties gained 350,000 businesses. There are many ways to measure opportunity in America, but one of them is whether businesses are growing or shrinking.

We overlaid election results from 2004 and 2016 to see if there were differences in voting behavior between counties where the number of businesses were rising compared to those where businesses were falling. We dubbed these two sets of counties as Opportunity-Rising and Opportunity-Falling America and found that a new phenomenon, the concentration of opportunity, may have contributed to electing Donald Trump. Specifically:

The dawn of the digital economy has affected people and places in many different ways. One of the more profound and underreported ways is that it has concentrated opportunity in America. We decided to look at one specific measure of opportunity, the growth or the decline in the number of private sector businesses up and running in a region.

Between 2005 and 2015, America added close to 150,000 net new businesses according to the Census Bureau. This would indicate a modestly growing economy and at least the semblance of ample opportunity for people to find jobs and compete for wages. But the creation and destruction of businesses was not evenly disbursed throughout the country.

In another 1,029 counties, the number of businesses in operation increased over those same ten years. In these counties, 350,000 net new businesses were added, an increase of 8.5%.  In the aggregate, these counties added nearly 6.7 million private sector jobs from 2005 to 2015. 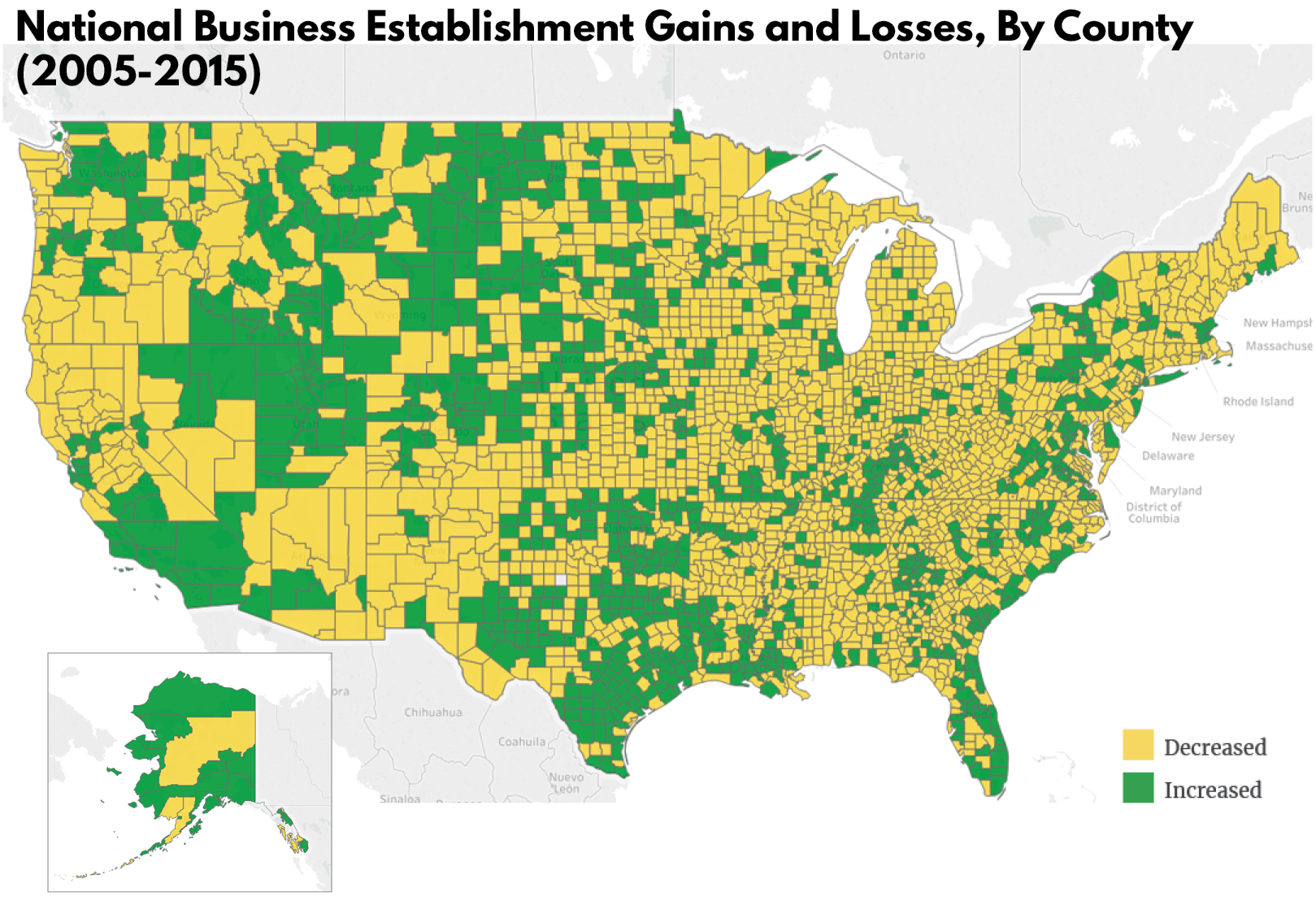 The number of businesses and whether they are rising or falling matters in a region because growth in the amount of businesses allows people more choice of where to seek employment. The more dynamic the market, the better people can demand higher wages. “Declining dynamism directly reduces wages by limiting the frequency with which workers receive outside offers and make wage-enhancing job transitions,” the Hamilton Project wrote in a 2018 report.1 In their 2014 Brookings Institute paper on America’s declining entrepreneurship, Ian Hathaway and Robert Litan wrote that “a dynamic economy constantly forces labor and capital to be put to better use.”2 Moreover, local businesses tend to recirculate more revenue locally than nationally, according to a 2013 study.3

With roughly 1,000 counties adding new businesses at a steady clip and roughly 2,100 losing them, we wanted to see if there were political consequences and patterns that emerged from this concentration of opportunity. To do this, we created two different “countries”: one home to the roughly 60 million voters who live in the counties that lost businesses; the other inhabited by the nearly 70 million voters in the counties that gained businesses or broke even. Would the outcome of the presidential election be the same or different? And how has that changed from 2004, the year prior to when we started measuring business losses and gains?

The electoral gap between the opportunity-rising and opportunity-falling parts of America widened substantially between 2004 and 2016, from just over 2-points to just over 15-points. The concentration of opportunity seems to be having a sizeable impact on the ballot.

The findings were eye-opening. Voters in opportunity-falling parts of the country flocked to Trump. Voters living in opportunity-rising places flocked to Clinton. The electoral gap between these two parts of America widened substantially between 2004 and 2016, from just over 2-points to just over 15-points. The concentration of opportunity seems to be having a sizeable impact on the ballot. And it may be that the antidote to right-wing populism is the important but difficult task of bringing opportunity to more people and more places in America. 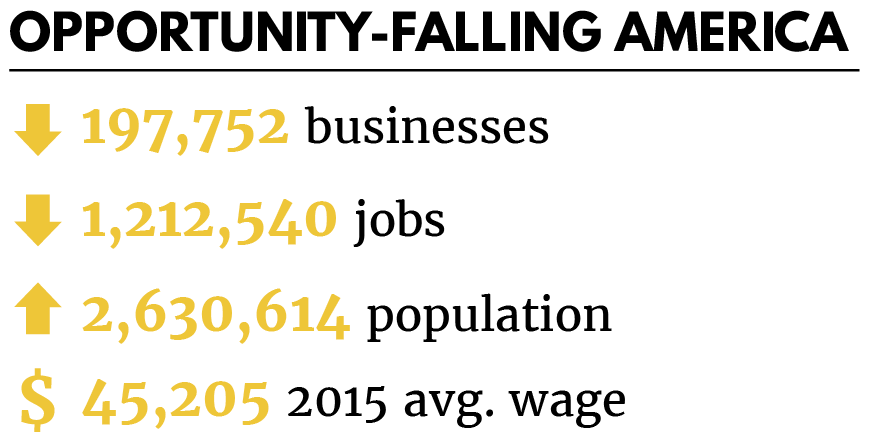 There are wealthy and dynamic areas within Opportunity-Falling America. To be sure, all is not lost there. But each of these counties had a net loss of businesses ranging from 1 in Waldo County, Maine to 3,829 lost businesses in Cuyahoga County, Ohio. And over the same ten-year period, more than 1.2 million people fewer people were employed in the private sector in these counties. 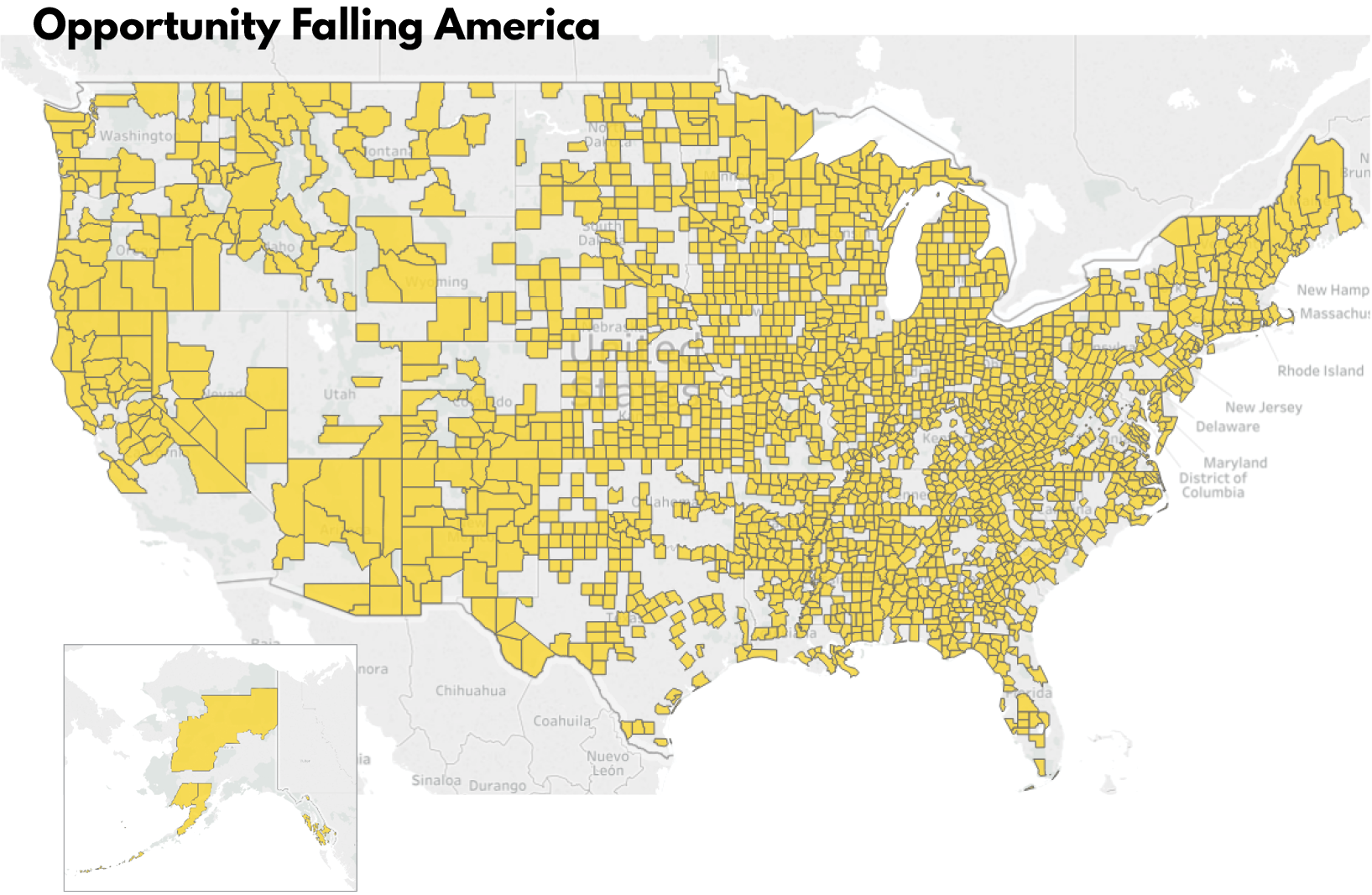 About 59 million people voted in the 2016 presidential race there and the outcome was not close.

Donald Trump won the popular vote by 53.0% to 47.0%. His Electoral College victory would have been a landslide, taking 343 electoral votes to Clinton’s 195.

To amass 343 electoral votes in Opportunity-Falling America, Colorado, Illinois, Nevada, Oregon, and Washington flipped from Clinton to Trump compared to the actual election.4 Michigan was the only state that went for Trump but flipped to Clinton in Opportunity-Falling America.5 This was mostly due to Wayne County, home of Detroit, which lost 2,778 businesses but still conferred a 260,000 margin of victory for her. 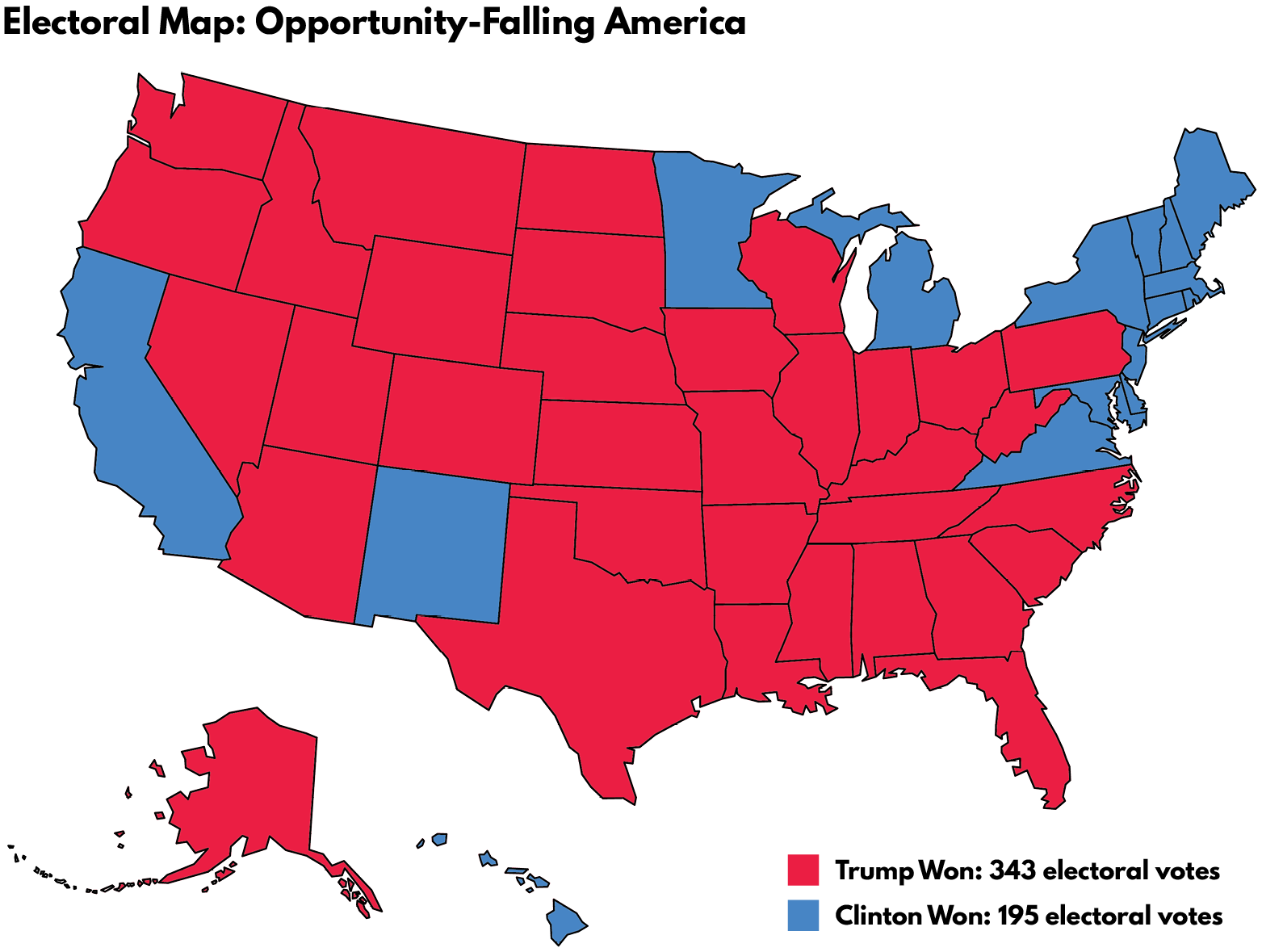 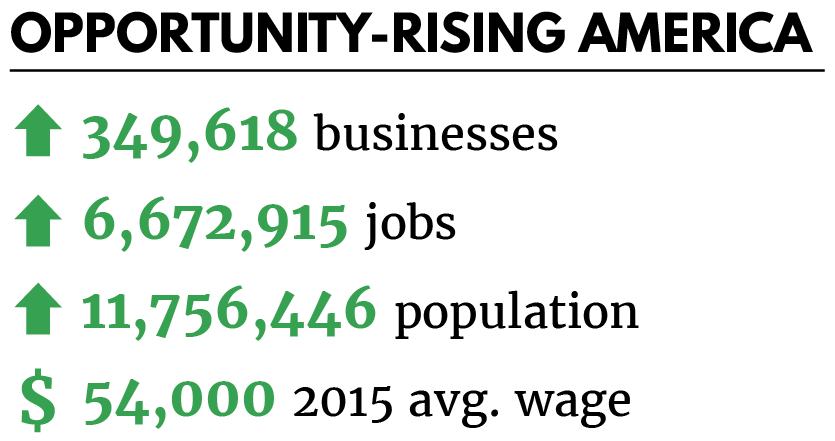 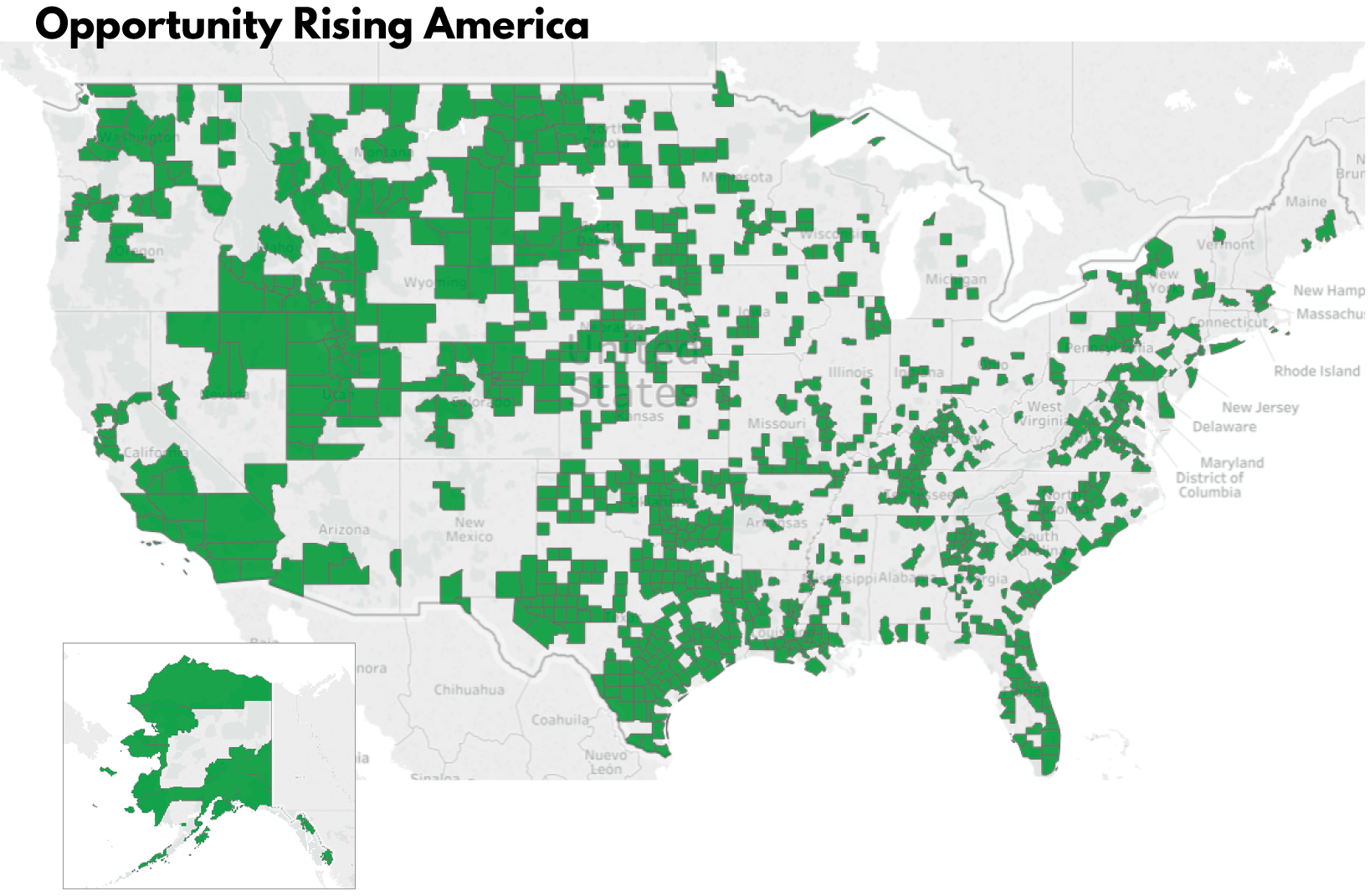 Just over 69 million people cast their ballots for president there, and if these counties were the entire country, Hillary Clinton would have thrashed Donald Trump in the popular vote and edged him in the Electoral College.

In Opportunity-Rising America, Clinton won the popular vote 54.6% to 45.4%. The last time a presidential candidate won a race by a greater percentage margin was Ronald Reagan over Walter Mondale in 1984. Clinton’s Electoral College victory was a more narrow 286 to 252.

To amass her 286 electoral votes in Opportunity-Rising America, Florida, Iowa, North Carolina, Pennsylvania, and Wisconsin flipped from Trump to Clinton compared to the actual election.7

To get his 252 electoral votes, Delaware, Minnesota, and New Jersey flipped from Clinton to Trump in Opportunity-Rising America compared to the actual results. 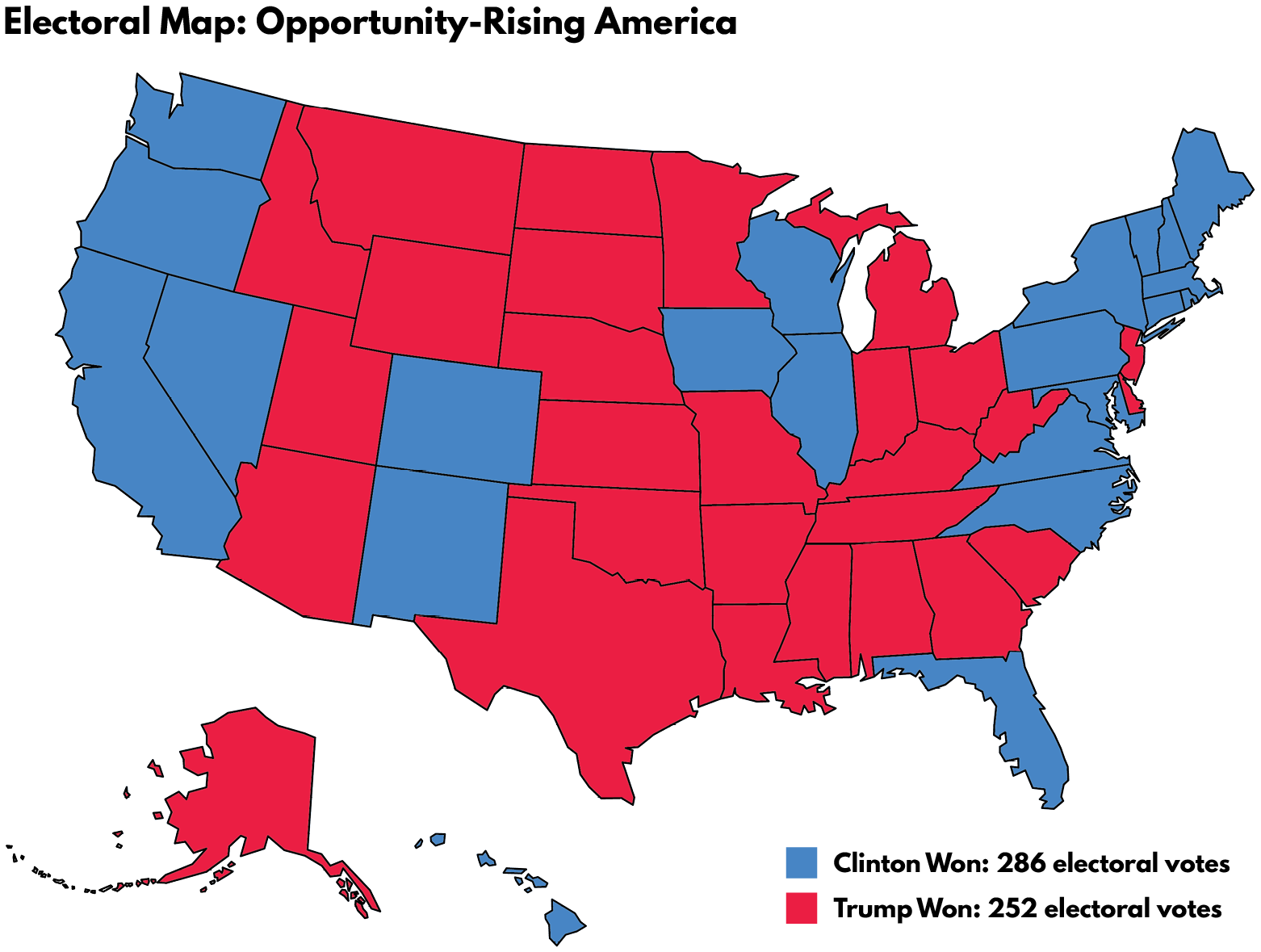 Perhaps there is nothing new in this split electorate. Maybe voters in these counties have habitually supported the Democrat or the Republican running for office. So we overlaid the 2004 county-by-county presidential vote over these two sets of counties. 2004 is significant because it is the year immediately prior to when we started measuring the growth or contraction of businesses county-by-county. What we found is that compared to 2004, the behavior of voters in these two parts of America changed dramatically. 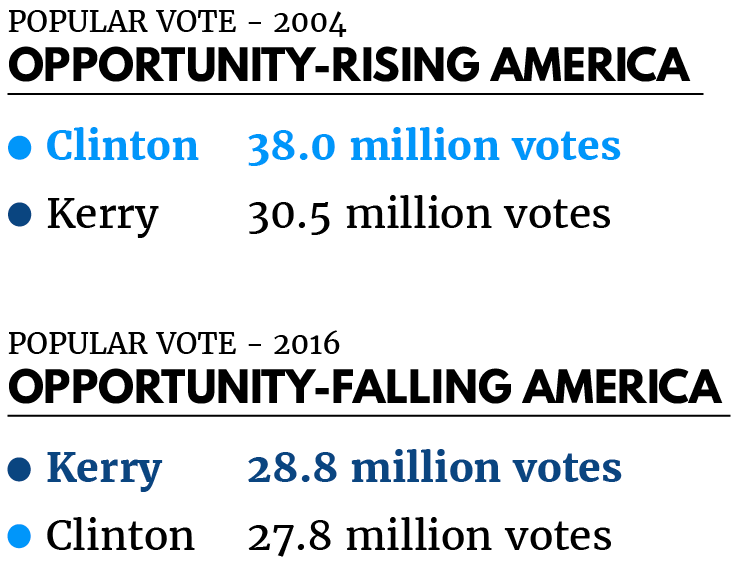 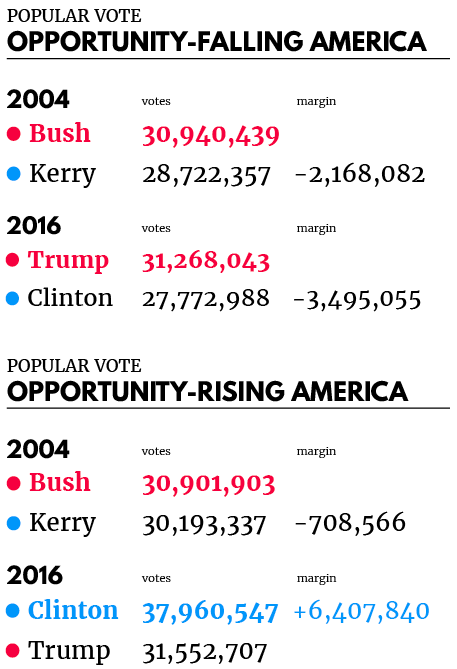 On the other hand, Clinton swamped Kerry in Opportunity-Rising America, outperforming him by more than 7 million votes.

The opportunity gap in the electorate appears to be a new phenomenon at least when the 2004 and 2016 elections are compared. As noted earlier, there wasn’t much of an opportunity gap in the economy in the prior ten years. The period from 1995 to 2005 was not only stronger economically, but far more of the country shared in the growth. Only 964 counties had a net loss of business between 1995 and 2005 compared to 2,109 counties that lost businesses between 2005 and 2015. And on average they lost fewer businesses, a 4.5% decline compared to 5.9%. The typical business loser county shed 41 businesses between 2005 and 2015 compared to just 16 businesses between 1995 and 2005.

African-Americans are Democrats’ most reliable voting bloc, conferring margins of ten-to-one or better in recent presidential elections. They remained a reliable voting bloc in both Americas, but there is evidence that turnout lagged in Opportunity-Falling America in 2016.

It’s worth considering that voters in a region of declining opportunity may be less motivated to support a candidate who is not seen as a change agent, even if that candidate’s opponent is Donald Trump. We will explore this possibility in future research.

Two-thirds of America’s counties shed businesses over a ten-year period and one-third gained them. In essence, the digital age has created two different economies spread out through America. In one economy, opportunity gathered; in the other it disbursed. As recently as twelve years ago, these two sets of counties voted almost identically. Now they are not only different economically, they are different politically. The polarization of opportunity has been a precursor to the polarization of politics. The antidote to the ugly populism seizing much of America may be to spread opportunity to more people and more places.

The definition of a business establishment is defined here by the Bureau of Labor Statistics.

Using data from “Dave Leip’s Atlas of U.S. Presidential Elections,” we overlaid results from the 2004 and 2016 presidential elections over the county-by-county business establishment data. These two years represented the bookends of our business data.

All of the calculations in this paper are based on the combination of these three datasets. The spreadsheet with the county-by-county data for 2005-2015 and the calculations can be found here, and for 1995 business data here.

A few notes and quirks about the data: We were unable to obtain borough-by-borough election data from Alaska so that state is omitted from our analysis. There are a handful of tiny counties that have zero businesses or did not report. They are omitted from our analysis. Independent cities were treated as counties for this analysis, and not merged with nearby county namesakes (e.g. Baltimore City and Fairfax City). We made sure that in our analysis there was no double-counting of votes or businesses. In dividing counties between business winner and business losers, we placed the 31 counties that neither gained nor lost businesses in the winner category.