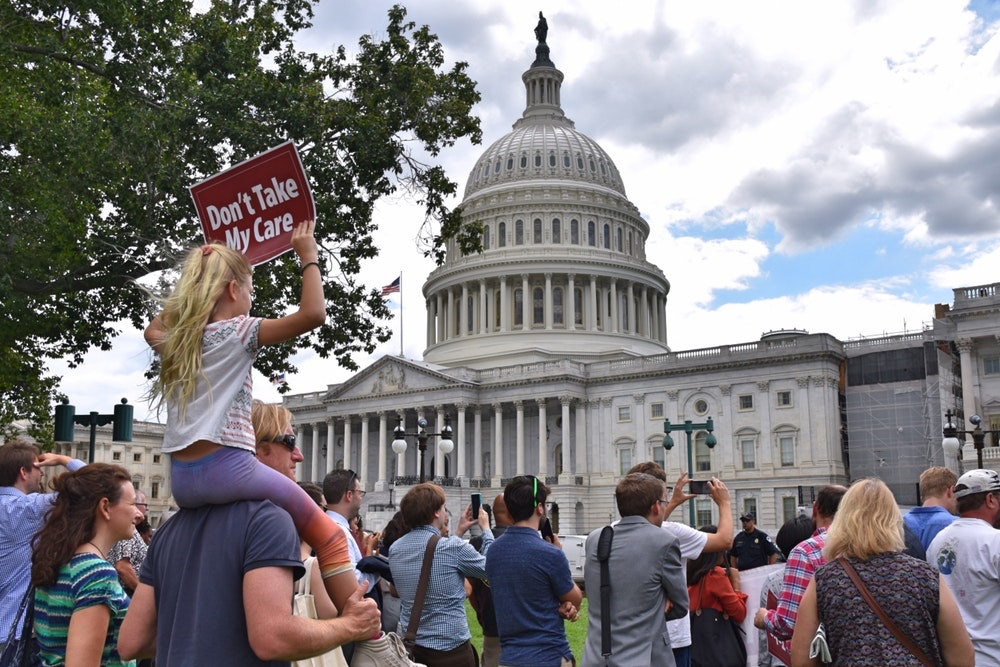 Since its passage, Republicans have voted more than 60 times to repeal all or parts of the Affordable Care Act (ACA). They have cast zero votes to replace it.

Repealing the ACA is the easy part, but satisfying Debbie Mills, a Trump supporter, will be more difficult. Debbie Mills owns a small business in Kentucky. Though she voted for Trump, Debbie said the ACA “made it affordable” to have coverage for her and her husband, who won’t be able to get a liver transplant without it.1 Undoubtedly, she believed there is a wonderful replacement plan in the wings to seamlessly switch out for the ACA. But, of course, there isn’t.

President-elect Trump has said he wants to replace the ACA with something better, but neither he nor the GOP leadership are in sync on a plan. Some Republican Senators want to repeal and replace at the same time. Most other Republicans have called for repeal with a delay in the effective date for two years or more to buy time for developing a replacement. They also have no plan to fix the ACA during the delay. The ACA desperately needs repairs after years GOP attacks and neglect of regular maintenance, which every major program needs.2

Despite their disarray, there may be no stopping Republicans in Congress or the White House from repealing the ACA. They have made this promise to voters so many times in so many ways that to back down now would expose them as frauds. But with no replacement plan, keeping this promise could ultimately be the Republican’s Waterloo: a vast overreach with no hope of getting safely back home.

That is because the media coverage of the repeal debate has focused on the fate of the 20 million people who have attained coverage under the ACA. But the story of the ACA’s success is much more robust than that. Using objective measures of coverage, this report identifies 10 major consequences of repealing the ACA without a replacement:

Although most employers offered health care coverage before the ACA and continue to do so, the lack of coverage among some employers presents a big obstacle to affordable coverage. The ACA created health plan exchanges to provide one-stop shopping for workers without coverage where they could find a choice of plans and receive a sliding-scale tax credit based on income-to-purchase coverage. Under repeal, the subsidies would be eliminated—effectively shutting down the exchanges.

The ACA pushed the percentage of working adults without coverage to historic lows, leaving only about one in 10 workers without coverage. Without the ACA, the number of workers without coverage could rise to the pre-ACA rate, which was 19.5% in 2010. That would be 18 million more working adults without health insurance, which would be a 68% increase.3 This consequence also has the potential to be even worse, because the GOP proposal for repeal would likely leave in place insurance market rules that would make coverage attractive only for very sick people who desperately need it and could afford it. Without additional changes, healthy enrollees would drop coverage—leading to an insurance death spiral. That would threaten coverage to the 7% of workers who purchased coverage as individuals prior the ACA, making the potential increase in working adults without health insurance even greater.

Changing jobs creates gaps in health care coverage. Prior to the ACA, 43% of working-age adults (18 to 64 years old) did not have continuous coverage throughout the year.4 Workers leaving a job with coverage had the opportunity to extend their coverage through a program called COBRA (for employees in firms with 20 or more employees), but only 19% did, because they had to pay the full cost of coverage without an offsetting employer contribution.5 This take-up rate rose from 19% to 39% as a result of a tax credit worth about two-thirds of the cost of COBRA coverage, which was enacted in 2009, the first year of President Obama’s presidency.6 From there, the percentage of working-age adults without continuous coverage dropped from 43% in 2010 to 25% in 2016.7 Under repeal, the number of working-age adults with gaps in coverage could increase by 32 million—a 65% increase.8

Disease can strike at any time. It’s important to have coverage continuously throughout the year. The ACA has solved this problem by providing financial support for people who are between jobs at a level that comes close to replacing the value of an employer contribution to coverage. This support is the same as the assistance through the exchanges for workers whose employers don’t provide coverage.

Health coverage provides a critical foundation for children throughout their lives.9 Prior to the ACA, the U.S. had made great strides toward universal coverage for children in large part because of the bipartisan Children’s Health Insurance Program (CHIP). Still, too many children, including some in families without coverage for the parent or with income too high to qualify for CHIP, remained uninsured. The ACA pushed down the percentage of children without coverage from 9.8% in 2010 to 5.2% in 2015.10 Without the ACA, the number of children without coverage could increase by 3 million—an increase of 90% as coverage reverts to pre-ACA levels.

The ACA has used several strategies to improve coverage for children. First, the ACA exchanges provides a one-stop shopping place where families can receive coverage together as a group and get the financial support for those with income up to four times the poverty level, which is too high to qualify for CHIP. Second, it requires large employers to offer coverage to full-time workers and their dependent children. Finally, it extends funding for CHIP and provides additional funding, including for outreach and enrollment, to reach more eligible children.

Consequence #4: Half of all American families in dire straits because of pre-existing conditions

The ACA reversed this trend through three reforms. First, it required large employers to offer affordable coverage to full-time employees and dependent children, or pay a penalty. Second, the requirement that everyone have coverage encouraged employees to take the coverage offered by employees and pay for their share of the premiums. Third, it provided limited tax credits to employers to offer coverage to their employees. As a result, coverage in the employer market stabilized, and the percentage of those covered by employer plans increased slightly, from 55.4% in 2010 to 55.7% in 2015.14 Repealing the ACA would undercut the forces that have halted the hemorrhaging and begun to expanded employer-provided coverage for the first time in more than a decade.

Preventive health care services, like well-baby and well-child visits, vaccinations and immunization, and screenings, are critical to helping Americans live longer, healthier lives. In addition, many preventive services are highly cost-effective, and some even reduce health care spending over time.15 Before the ACA, some insured Americans struggled to access preventive care due to financial barriers from deductibles and copayments.

Before the ACA, older Americans in particular struggled to find affordable health insurance before they are eligible for Medicare at age 65. The combination of pre-existing condition exclusions, age rating, and annual and lifetime limits left older Americans with very few meaningful coverage options. By 2010, more than 16% of adults aged 45-64 were uninsured.18

The ACA solved this problem through a combination of insurance regulations and subsidies. It restricted the variation in the pricing of insurance to a ratio of coverage for the old vs. the young to 3 to 1. Normally, the ratio is 5 to 1. The subsidies for coverage through Medicaid and the exchanges further reduced costs for older adults. As a result, the percentage of uninsured older adults dropped from 16.3% in 2010 to 9.6% in 2015.19 Repeal could mean 5 million more older adults without health insurance—a 65% increase from pre-ACA levels. 20

The ACA has solved this problem in a number of ways. A key provision allows young adults to stay on their parents’ health insurance plan until they are 26. The ACA’s Medicaid expansion and coverage through exchanges also helped expand coverage for young adults. As a result, the percentage of uninsured young adults dropped by half, from 29.7% in 2010 to 14.5% in 2015.22 Repeal of the ACA could reverse that progress back to 2010 levels and 4 million more young adults would not have coverage—a 100% increase.23

Consequence #9: 62% rise in poor adults without a health care plan

Before the ACA, coverage for poor adults was not widespread because Medicaid, which provides most of the coverage for poor Americans, focused on coverage for pregnant women and children. Adults, often working in low-wage jobs, received little, if any, assistance with expensive insurance premiums. The ACA addressed this problem by expanding coverage through Medicaid to all adults with income below 138% of the federal poverty line.

Despite the fact that 19 states have not adopted the Medicaid expansion, the percentage of uninsured poor adults dropped from 42% to 26%, and the percentage of uninsured near-poor adults (those between 100% and 125% of the federal poverty line) dropped from 46% to 24%.24 Had all states expanded their Medicaid programs, just 17% of poor and 20% of near poor adults would lack health insurance today.25 Under repeal, the number of poor Americans without coverage could rise by 62% and the number of near-poor could rise by 92%.

Consequence #10: $165.8 billion in financial losses for the nation’s hospitals

The expanded coverage under the ACA allowed the nation’s hospitals and providers to suffer fewer losses from patients who couldn’t afford to pay their bills. It also allowed Congress to reduce special payments through Medicare and Medicaid for hospitals with a disproportionately high share of losses from patients without coverage.

Without the ACA, hospitals are set to take a huge hit. Specifically, U.S. hospitals stand to lose $165.8 billion over 10 years from repealing the ACA, which would degrade their ability to serve everyone in their community.26 Providers, pharmaceutical and medical technology companies, and health care suppliers in general would also face losses from patients who lose coverage and can no longer pay their bills.

It’s not hard to call for repeal of Obamacare with the law’s namesake in office ensuring it will stay afloat and bring security and stability to the country. But with Republican control of the government, calls for repeal now have a very different meaning. Actions have consequences. And when it comes to the ACA, Republican efforts to repeal the law could have dire consequences.