Cheating the Future: The Price for Not Fixing Entitlements

There is no doubt that to solve our budget problems more revenue is needed, but we cannot ignore that entitlements are also driving deficits and crushing investments in the next generation. The squeeze on public investments is not just confined to the upcoming decades—when retiring baby boomers cause social safety net programs to swell and consume the vast majority of non-defense government funds. Original analysis by Third Way and Regional Economic Models, Inc. (REMI) quantifies sequestration’s immediate damage to investments and the national and state economies. By not dealing with one of the two principal sources of our future deficits, we’re faced with near-term cuts that cheat the future by crushing investments that cure diseases, train workers, and fix roads.

The automatic, across-the-board federal spending cuts, known as sequestration, are about to begin. The question now is less whether sequestration will be avoided than who will be blamed. Republicans certainly earned their share. They have been far too stubborn on taxes. But Democrats deserve significant blame as well for being far too reluctant to slow the growth of entitlements.

In the budget battles of the last three years—from the Budget Control Act to the fiscal cliff—every spending category has paid some price. But entitlements remain virtually unscathed. As a result, investments have borne the brunt of cuts.

With entitlements off the table, we are left with the meat cleaver of sequestration. And while the sequester’s cuts shield most safety net spending, they exacerbate the damage to the other core Democratic priority: public investments.

This report demonstrates state-by-state and sector-by-sector the danger of holding entitlements virtually harmless. This year, the United States would lose thousands of jobs in research, technology, and other high-paying, growth-promoting activities. Altogether, by the end of 2014, REMI estimates that the U.S. economy will provide 1.9 million fewer jobs. With entitlements protected, the pain will reach all states and all sectors, most deeply affecting public investments.

Jobs in innovation are among those most severely affected.

Occupations across the economy will shed jobs, but those relating to public investments—in research and infrastructure development—will be hit much harder than most. On average, REMI estimates, the U.S. economy will employ about 1% fewer workers over the next three years under a sequestration scenario. But the employment loss will be roughly1.5 times as large for scientists, engineers, and construction workers. These are the types of workers whose labor increases the productive capacity of the U.S. economy—and whose jobs we can least afford to lose. 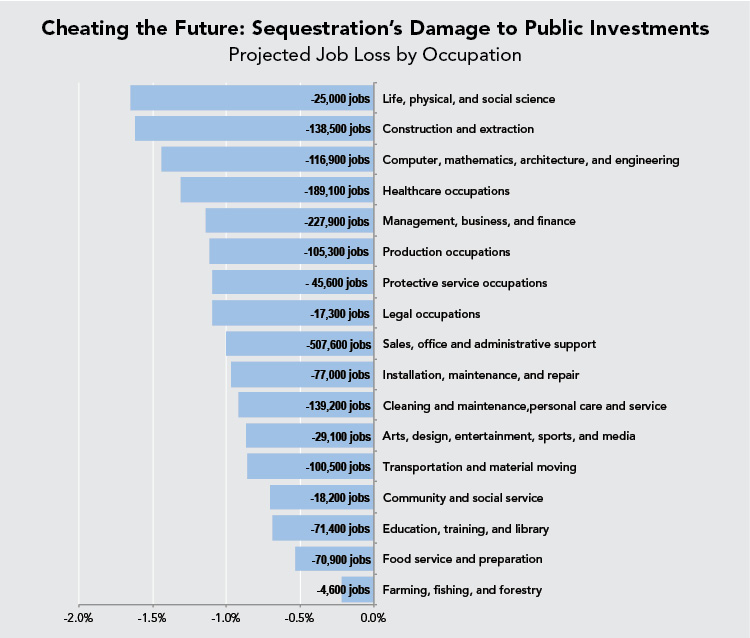 The recovery and job creation will slow substantially.

In 2013, the U.S. economy is set to add about 240,000 jobs per month on average. That’s significantly better than what we’ve seen over the last few years. But if sequestration takes full effect, we should expect no more than 120,000 new jobs per month, according to REMI’s analysis. Under sequestration, job growth would suffer in 2014 too, and only in 2015 would the economy add jobs at the rate we could otherwise expect. But then, the damage will be done. That year, the economy will employ 1.8 million fewer workers under sequestration than it would have without sequestration. 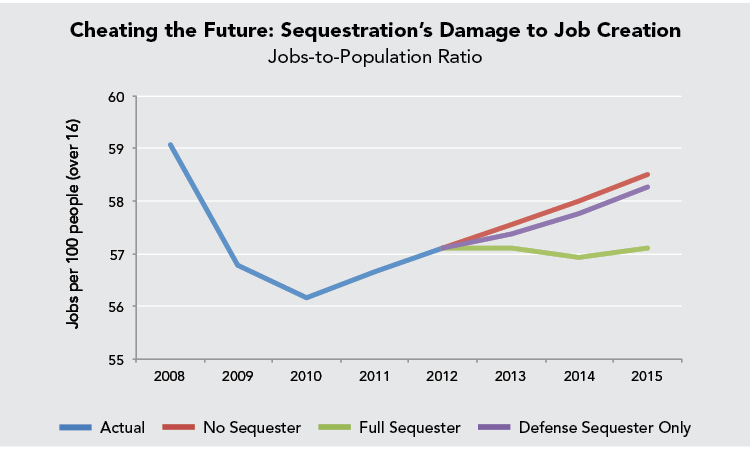 A projection of the U.S. employment-population ratio illustrates this consequence. Without sequestration, the economy can be expected to add enough jobs to increase the share of working-age people who are employed. But under sequestration, job growth is only sufficient to keep up with population growth through 2014.

The vast majority of lost jobs will be outside of Washington.

Sequestration affects more than government employees in Washington. The federal government spends money and employs workers all over the United States. If the full sequester takes effect, REMI projects that the capital region—Washington, D.C., Virginia, and Maryland—will lose 175,000 jobs in 2014. Those states’ job losses will be above average, but they pale in comparison to the 1.7 million jobs that will be lost around the rest of the country. 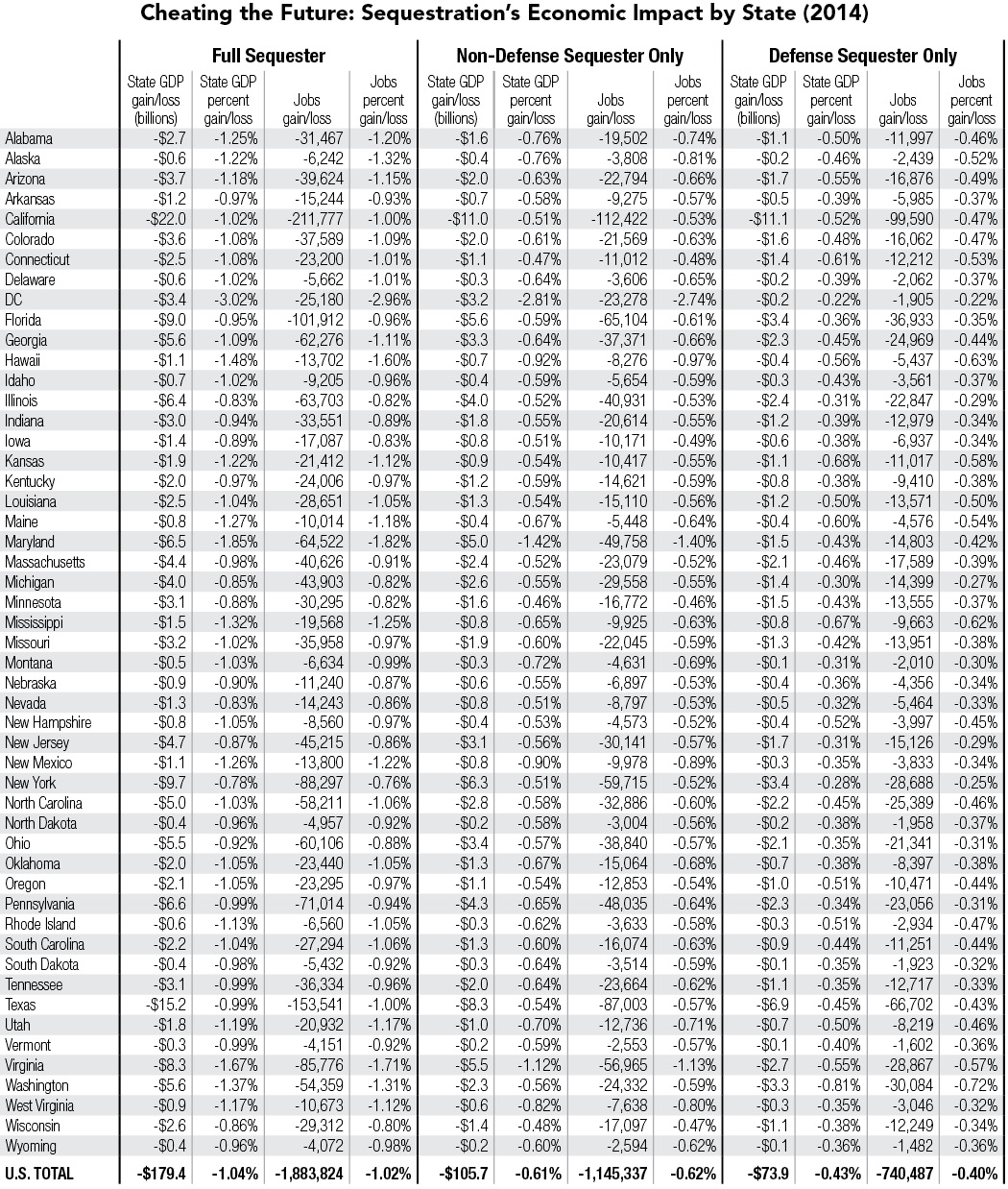 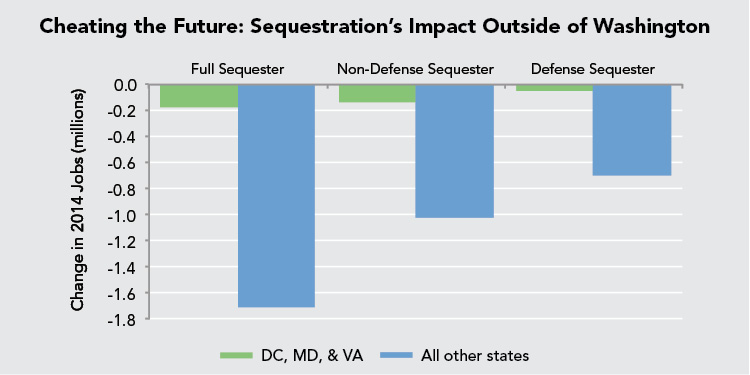 Cuts will cost the private sector more jobs than government. 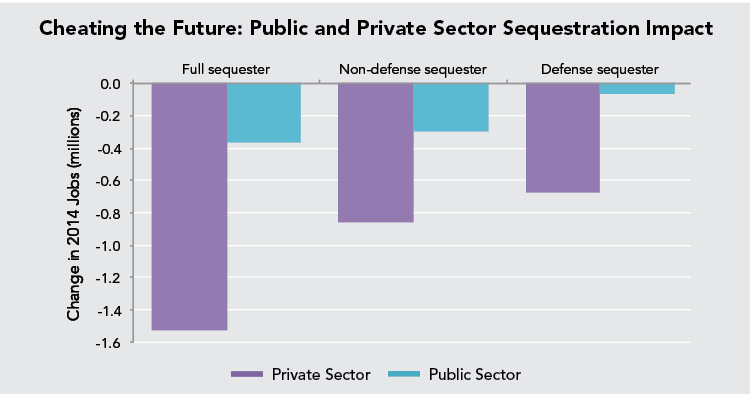 The reach of the sequester is also evident in the breakdown of industries it would affect. Construction is the industry with the single largest number of job losses projected. But its share of the total job loss is only 12%, as the sequester’s reach covers all industries in both the public and private sectors.

While the ideological fight over revenue and entitlements continues, non-defense discretionary programs have faced disproportionate pain. We are threatening investment in the next generation through continued cuts, while we leave the true source of our long-term problem virtually untouched.

The solution to our long-term debt problem must be radically different from sequestration. First, revenue must be part of the picture. Tax reform has the potential to increase efficiency in the economy while raising the trajectory of federal revenue. Second, instead of immediate, across-the-board defense cuts, targeted and strategic cuts should be phased in over time. Third and most critically—to preserve public investments—the non-defense sequester should be replaced with real entitlement and mandatory spending reform. This approach would be less harmful to the recovery, and it would much more effectively address the large deficits projected down the road.

This analysis should be viewed as a scenario given the most current information available. The analysis is based on the Office of Management and Budget’s most recent available information, from September 2012, on which federal budget categories are subject to automatic spending cuts legislated in the 2011 Budget Control Act. This analysis does not account for the different ways in which the cuts may be applied within budget categories.

REMI economists used PI+, a proprietary model developed by REMI that is also licensed by both public and private organizations in almost every state and in various countries across the world. For complete information on the history of REMI and its software, visit www.remi.com.

While the cuts are “across-the-board,” impacts are not.  Concentrated in certain geographic regions and different industries, a 51-region PI+ model, built to show each state and the District of Columbia individually, captures what that distribution would look like.

The model for PI+ is the next generation of Policy Insight, developed by REMI. This model is a simulation and forecasting tool custom-built to provide a detailed representation of the economy and demographics of sub-national regions. While the model can be built down to a county level, for the purpose of this analysis, the PI+ model contains 51-regions, one for each of the states and the District of Columbia.  PI+ is not a traditional macroeconomic model. Rather, it is a model built both from the bottom-up and top-down. It captures each state’s industrial mix, the unique characteristics of its population, taxes, federal spending, and it accounts for national growth constraints provided by federal data sources. The model is dynamic, including a baseline forecast for each year out to 2060 and exogenous simulation variables to shock the model across any one of those years.

PI+ includes multiple perspectives on the economy in order to show their interactions. This includes final demand and output based on GDP, a business perspective on maximizing profits while trying to lower costs, and households with labor supply and demographics. The model also has market concepts for labor, housing, factors of production, and the competitiveness of regions between each other and internationally.

The simulation describes the potential impact of federal sequestration in 2013, 2014, and 2015.  Running the model involves associating the direct effects of a policy (in this case, changes to federal spending) with variables to illustrate it in the model.

Half of the cuts come from defense (about $54.7 billion in 2014) and half non-defense spending categories (which are about $38.6 billion from general appropriations and $16.1 billion from health-related spending for Medicare). In order to run the model, the flows of underlying spending and demands associated with these categories needed to change by the amounts of budget cuts in each category. From there, PI+ runs it through its structure to see how the economy reacts when firms and households have a chance to respond to these changes in the form of different behaviors.

Modeling Federal Defense Cuts: The Office of Management and Budget (OMB) clarified late in 2012 that military payrolls are exempted from automatic cuts. Therefore, the incidence is placed on military procurement. Data from the Bureau of Economic Analysis (BEA) is used to determine each state’s share of military spending. From there, Bureau of Labor Statistics (BLS)data is used to estimate the procurement spending from the military to industries. This utilizes a national IO table from the BLS national product accounts. Since this is procurement, this “demand” is subtracted from the states. This allows the model to use its internal logic to find the likely places for the private sector to fulfill orders. For example, a base in North Carolina might need aircraft, but Kansas and Washington are more likely to actually produce them. This is not a contract-by-contract representation of the automatic cuts, but it does exempt military payroll, take account of preexisting spending patterns, and match them with state-level characteristics.

Modeling Federal Non-defense Cuts: The nature of sequestration as “across the board” necessitates cutting non-defense discretionary spending to meet the spending constraints. The national control forecast in the model is updated to include these cuts. The model allocates the cuts based on existing employment spending patterns across states. This only impacts the parts of the budget and the economy associated with non-defense, non-Medicare spending, and it leaves out other mandatory programs like Social Security and Medicaid from the cuts.

Medicare: The cuts include reductions in reimbursement rates to Medicare providers, which are factored in differently. The potential influence of changing federal spending on the health care sector is always complex. In essence, a dollar less of federal spending on health care does not necessarily mean a dollar less economic activity. To outline the situation, there are four general places of incidence for changing healthcare costs: households, insurance companies, healthcare providers, and the government. There are only three with Medicare, becuase the government is the insurance company. In this simulation, the cost is input on providers, since they are directly impacted by lower reimbursement rates, and allowed the model’s internal calculations to determine how the costs pass forward onto consumers and suppliers.

PI+ has a variable for “production costs”—which represents any outside change in the cost of doing business for an industry, such as technological innovations, new competition, developments abroad, or government policy. The production cost of one industry is related to competitiveness and the costs for households and other firms in the model. This cost is placed on the health care sector and spread between states based on their population of Medicare enrollees over the age of 65.

REMI differences from previous studies in the literature:

The starting point for interpreting any scenario using PI+ is the interpretation of the baseline forecast.  Using its internal structure, a short-run national forecast from the University of Michigan, and changes in the IO coefficients developed by the BLS, PI+ generates a year-by-year “business-as-usual” (BAU) forecast.  This BAU forecast gives the analyst the starting point for introducing policy changes. Once the variables are selected, modified, and put into the model, it runs a new forecast and then compares the alternative against the baseline. The results should be interpreted as the difference between the two, accounting for the Budget Control Act of 2011 in isolation.  This particular analysis did not look at any other federal or state policy changes that could simultaneously alter the economic projections within a state.