Suggested message: Americans want to find common ground to reduce the need for abortion while protecting the right to have one.

The majority of Americans have consistently held nuanced views on abortion—neither believing that abortion should be always legal or always illegal. Among this group in the middle, a majority leaned pro-choice. They thought abortion should be “mostly legal.” Yet pro-choice advocates often feel like they are playing defense in policy debates.

We believe that the key to winning the debate over hot-button culture issues is to appeal to the middle by winning what we call “the battle of reasonableness.” Our suggested framework is reducing the need for abortion while protecting the right to have one. This framework allows progressives to hold on to pro-choice principles while addressing the moral concerns that the middle has on abortion. 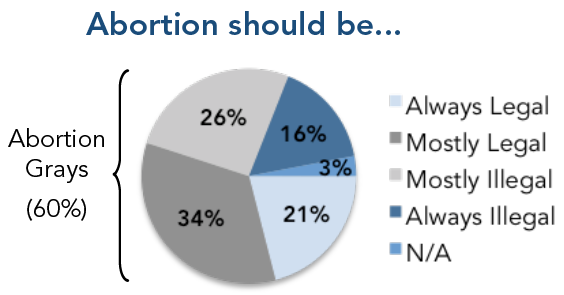 In keeping with this message, progressives can highlight two policy tracks that reduce the need for abortion: preventing unintended pregnancies4 and supporting pregnant women and new families, including adoption.5 These policy tracks are most effective at speaking to moderates when coupled together.

Pro-choice and pro-life Americans can agree that we need to reduce the need for abortion in this country by preventing unwanted pregnancies, assisting pregnant women, and supporting adoption. Common ground opponents want to make abortion against the law and throw people in jail for having them. That way would tear this nation apart. Focusing on reducing the need for abortion would find our common areas of agreement.