A Third Way/ALG Research poll of 1,600 likely 2020 voters with oversamples of Democratic primary voters and Independents shows that to win on health care, Democrats should propose bold plans to cut costs that build upon, and do not tear down, the Affordable Care Act (ACA).1 Key findings:

With a voting population that is roughly 90% covered and 90% satisfied with their coverage, addressing out-of-pocket costs through cost caps and other cost-saving measures (such as bans on out-of-network billing) are popular steps that address the kitchen-table concerns that voters experience.2 If Democrats speak to personal health care costs and have a plan to address those costs that doesn’t force people to give up aspects of the health care system that they like, health care could be a decisive issue in Democrats’ favor in 2020.

Thus far, the early health care conversation in the Democratic primary has focused on the shared value of ensuring universal coverage. In the latest presidential debate, every Democratic candidate on the stage professed to have a health insurance plan that would cover everyone.

But as our poll discovered, this health care discussion misses an important distinction. Voters conceive of health care in two parts: cost and coverage. And voters are unequivocal that the cost of health care is what matters most to them.

By a 62–33% margin, all voters say that lowering the cost of health care should be prioritized over providing coverage to more Americans. Independents (which includes partisan leaners in this report) prioritize cost by 31 points. Likely Democratic primary voters are split 49–48% in favor of costs and well within the margin of error. So, when voters say health care is their top issue, most are actually saying that they want action to reduce its cost. 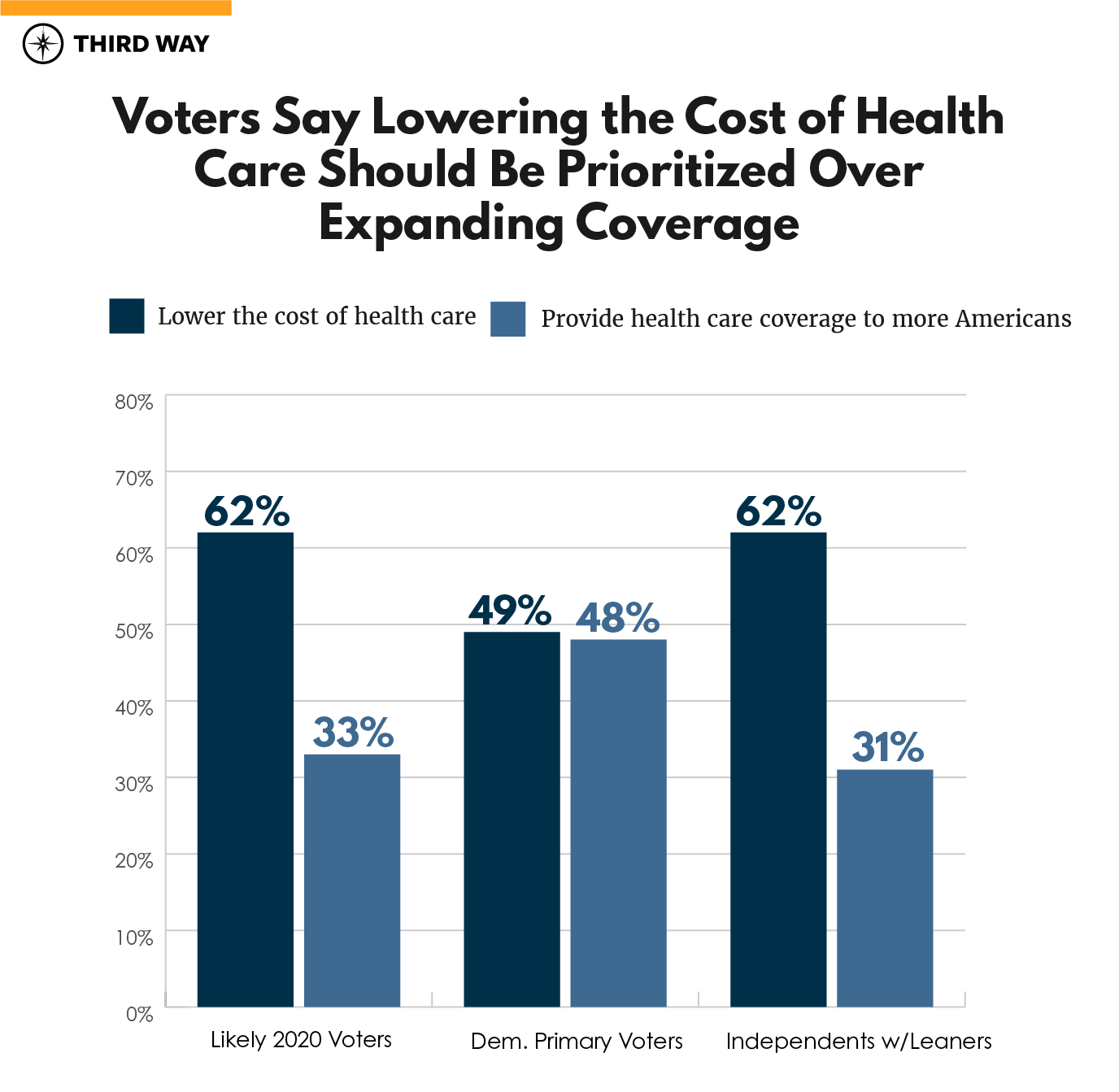 Voters’ focus on health care costs makes sense because 92% of all voters say they currently have coverage, 89% have been covered for at least the last five years, and 88% are satisfied with their plan. Comparable numbers of Democratic primary voters and Independents say the same.

So, when voters say health care is their top issue, most are actually saying that they want action to reduce its cost.

As always on health care, voters want to know what they will get from various health care reforms. Since the absence of coverage is not most voters’ lived experience, what they hope to get is relief from high costs, especially unexpected bills. Forty-three percent have had a surprisingly high medical bill in the last five years, and among young people, this share jumps to 52%.

In addition, Trump is vulnerable on costs. Sixty percent say they trust him “not at all” (46%) or “not much” (14%) to keep down health care costs.

Trump’s paltry performance on health care sets up a compelling message for Democrats in 2020: Run relentlessly on voters’ top priority of reducing personal health care costs, be unsparing in knocking Trump for his inadequacy on the issue, and win the “what will I get from this plan” argument among people who have coverage and expect to keep it.

That is the message that powered Democrats’ blue wave election in 2018, and it is the playbook to follow again in 2020. That is how Democrats win back power and retake the levers of government necessary to achieve guaranteed, affordable health care for all.

3. Medicare for All popularity may have peaked.

Twenty-seven million people do not have health care coverage and Democrats are united in expanding coverage to all.3 So, while the data is clear that voters prioritize reducing personal health care costs over expanding coverage, this does not diminish our shared commitment to guarantee health care for all. And of course, there are different ways to achieve universal coverage. The most far-reaching and controversial is Medicare for All.

Our poll finds that public support for Medicare for All may have peaked.4 Initially, 53% of all voters support it when first asked about it, including 70% of Democratic primary voters and 50% among Independents.

What is most instructive is that after hearing a series of positive messages in isolation that tout the benefits of Medicare for All, support does not budge. But when voters hear negative messages in isolation, support drops to 35% for all voters, 48% with Democratic primary voters, and 30% with Independents. Among those who negatively rate Trump’s handling of health care, a group that will be key to Democrats’ bid to win back the White House, support for Medicare for All drops from 64% to 40% after the negative messages.

After hearing both positive and negative messages, support for Medicare for All drops to 43% among all voters (down 10 points from initial support), 58% with Democratic primary voters (down 12 points), and 37% with Independents (down 13 points).

Among those who negatively rate Trump’s handling of health care, a group that will be key to Democrats’ bid to win back the White House, support for Medicare for All drops from 64% to 40% after the negative messages. 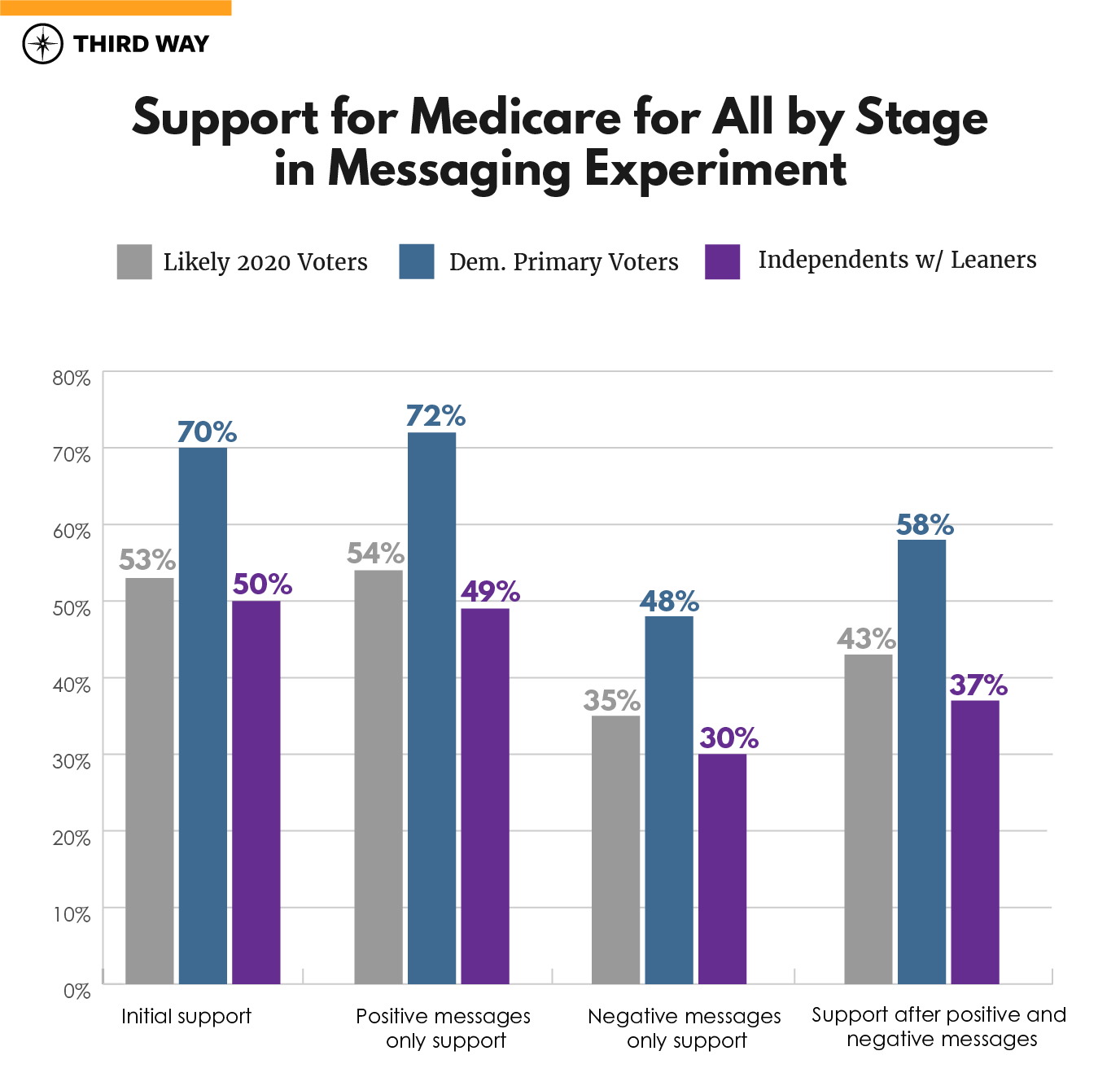 In the suburbs, where Democrats made their biggest gains in 2018, support for Medicare for All drops from 50% to 38% after hearing positive and negative messages.

Looking at other specific constituencies of interest, those who indicated that health care is a large financial burden support Medicare for All at just 44% while those who post on Twitter every day support it at 63% after hearing positive and negative arguments.

This broad and deep degradation in support suggests that Democrats would be fighting from a position of weakness if the health care debate shifted to whether or not to adopt Medicare for All in 2020.

In short, Medicare for All has nowhere to go but down for Democrats in a general election.

4. Building on the ACA with the addition of a cost cap is broadly popular and syncs with voter concerns.

While Democrats share the goal of achieving universal health care coverage, there is disagreement over whether to get there by building on the ACA or starting over with Medicare for All. Voters, however, seem clear on what they want: By a 63–29% margin, all voters prefer action to improve the current system over replacing it with Medicare for All. Democratic primary voters prefer improving on the current system by 10 points and Independents by 38 points. 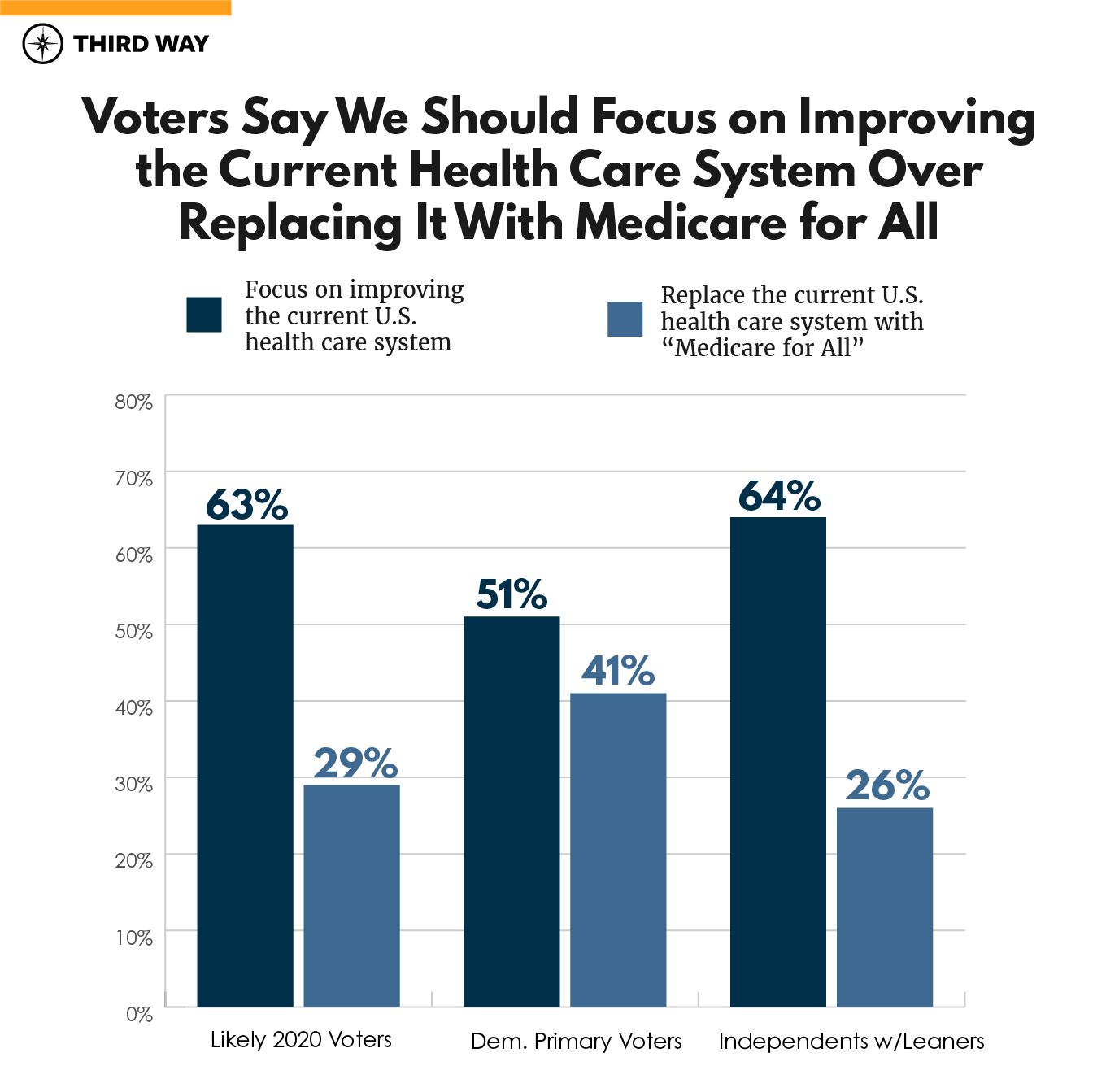 In addition, voters want a plan that prioritizes capping out-of-pocket costs over a Medicare-for-All plan. This survey tested the salience of such a proposal by presenting respondents with a plan called Cost Caps and Coverage for All. Cost Caps puts a defined cap on out-of-pocket costs and guarantees health care for all without requiring anyone to give up their coverage. And voters responded that a plan that directly addresses cost like Cost Caps is the best approach for actually reducing health care cost.

By a 13-point margin, all voters say that a plan like Cost Caps would be better than Medicare for All when it comes to their top concern of reducing the cost of health care. Democratic primary voters split on this question, but Independents say Cost Caps by 15 points. Constituencies across Democrats’ coalition, including voters of color, union voters, and suburban voters, all support Cost Caps over Medicare for All. Voters say they value such a plan because it is fair across income levels with those with low incomes paying little or nothing for coverage. In another question on “how much do you think is fair to pay for health insurance every month,” a majority put between $1–$100 (36%) and $100–$200 (25%), while only 7% say $0. Americans want to contribute, they just want it to be fair and understandable.

A second important feature that distinguishes proposals like Cost Caps from Medicare for All is control. In the messaging experiment, a significant concern shared by all voters, Democratic primary voters, and Independents was that Medicare for All would wrest control of health care away from individuals. On this crucial issue, all voters say that Cost Caps would be better than Medicare for All on individual control over health care by a 47–24% margin; Democratic primary voters agree by 16 points and Independents by 28 points. A plan that centers control over health care – beginning by not banning private insurance – could help insulate Democrats from Republicans’ most likely health care attack in 2020.

Voters prefer to build on the ACA rather than starting over from scratch, and they want a plan that focuses on reducing health care costs over expanding coverage. The primary reason why voters prefer a plan like Cost Caps is that it does center on reducing costs, but additionally, it maintains individuals’ control over their health care. On the politics of health care, a plan like Cost Caps would allow Democrats to take on Trump on the key issue of health care costs, an advantage Democrats would cede if they go all-in on Medicare for All.

The cost of health care is the defining issue of 2020, and voters have zero trust in Trump to address it. He will lose the health care debate if it remains fixed on costs. But Democrats will bail Trump out if they shift the debate to whether or not the country should adopt a one-size-fits-all policy like Medicare for All. This survey showed that support for Medicare for All has peaked while voters reject it after hearing negative and positive messages on it. Instead, the way forward for Democrats is to run on plans that fulfill the shared value of achieving universal coverage, but one that is centered on reducing health care costs by capping them. Such a plan aligns with voters’ top priority of cost, and it allows individuals to retain control over their health care.

Beating Republicans on health care costs and the defense and expansion of the ACA was the playbook that Democrats followed in 2018. The moderate and mainstream Democrats who won back the House and governorships around the country ran first on reducing the cost of health care, including prescription drugs and surprise billing, and protecting those with pre-existing conditions. And where relevant, they also fought for expanding coverage through such ideas as the ACA’s Medicaid expansion. If Democrats can sink Trump on health care, they will be in a good position to evict him from the White House. Luckily for him, he’ll still be eligible for Medicare.