When it comes to the state of America’s higher education system, there are three lines of conventional wisdom that the political punditry has preached over the last few years: Democrats just want to make college free, Republicans want to keep government out and let the markets decide, and the American people are losing faith that college is worth it in the first place. And in an era of deep polarization and government mistrust, there is little faith that Congress will be able to find agreement on the biggest higher ed challenges we face, let alone on the solutions needed to fix them.

But a new national survey of likely 2020 voters finds that there is far less daylight than you’d think between Republicans and Democrats when it comes to both the problems and the solutions that would improve outcomes for students in our higher ed system. Moreover, voters on both sides of the aisle believe higher education is essential when it comes to helping more students secure the jobs they need to be successful in today’s economy. They also believe that institutions can and should do more to provide value to the students they are supposed to serve—not just enroll them and cash their checks, but get them to graduation and equip them with the skills they need to get a good-paying job and pay off their loans. That’s why, as this poll shows, there is widespread bipartisan support for implementing stronger federal guardrails across the entire system to make sure that both students and taxpayers are getting a real return on their huge investment in higher ed.

The analysis that follows is based on an online, nationwide survey of 1,389 likely 2020 voters conducted by Global Strategy Group for Third Way from April 30th through May 9th, 2019.1

Conventional Wisdom #1: Americans No Longer Think College is Worth It. 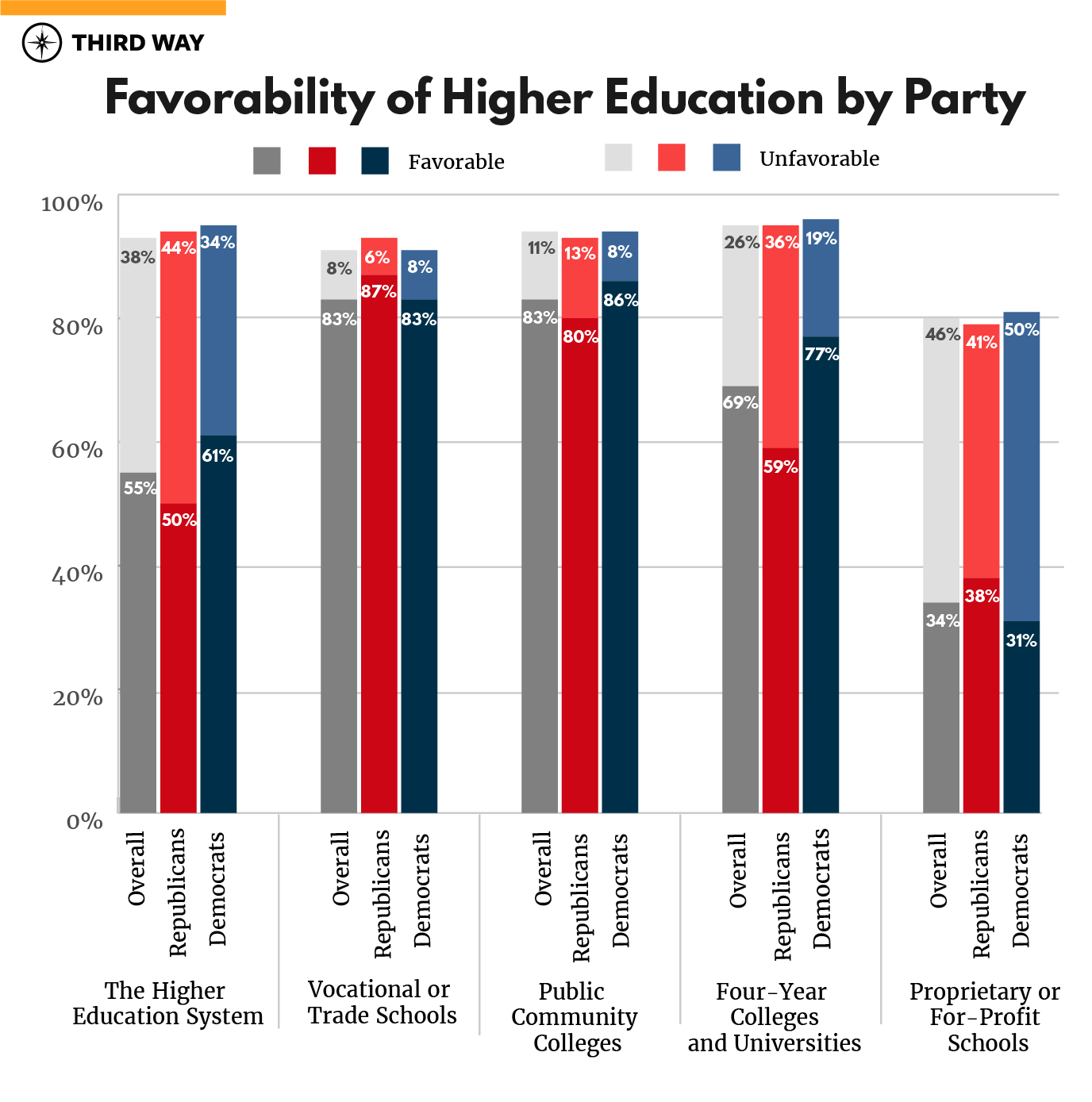 This positive viewpoint persists because an overwhelming majority of Americans believe that bachelor’s degrees (70%), associate’s degrees (69%), and vocational training certificates (90%) are “worth the investment and usually pay off,” with broad support for each of these credentials across party lines. In fact, there is near unanimous agreement (93%) that the skills required in today’s job market have changed, underscoring why all voters continue to see the value in higher ed—even when news stories about cheating admissions scandals, school closures, and rising student debt dominate the headlines.

Yet while faith in the long-term payoff of education beyond high school remains strong across the ideological spectrum, there is also widespread acknowledgement that the system is not currently reaching its full potential. Across the board, Americans believe that institutions should be doing more to ensure the students they enroll graduate, get good jobs, and pay off their loans.

Mirroring what we found when we polled college administrators earlier this year, voters simply reject the notion that schools cannot control whether their students graduate or are equipped to get good-paying jobs. When given the opportunity to select which statement they agreed with more, by approximately 60 points voters said that the federal government should stop subsidizing institutions that fail to provide value to students (such as those with graduation rates under 10% or those who leave their students more likely to default than graduate) rather than letting them off the hook. 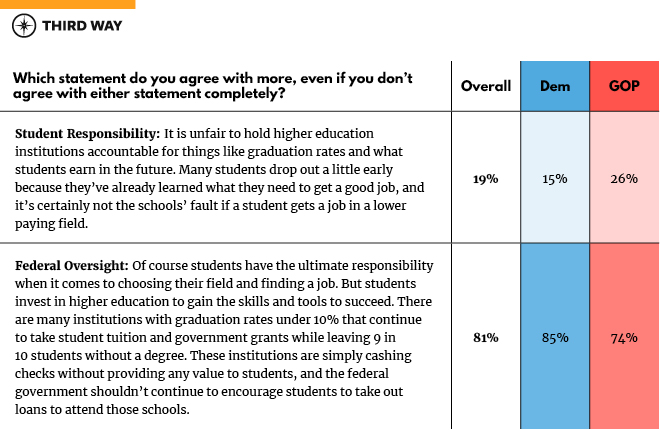 If you read the national news, it would be easy to believe that the only thing Democrats want to do to improve our higher education system is to make college free. But when asking 2020 Democratic voters exactly what higher ed policies they would like to see the federal government enact, it’s clear there’s a menu of policy options on the table that spans well beyond the free college and affordability debate. In fact, when given the choice of a variety of policy proposals, eliminating tuition at public colleges and universities was not even one of the top three policies Democrats said they support.

Instead, Democratic voters ranked “eliminating tuition at all public colleges and universities to help more students gain access to a college degree” 11 out of 17 as a policy they “support” and 13 out of 17 as an idea they “strongly support” (See Appendix for full list of policies). And while making community colleges free fared slightly better, Democrats showed higher support for ideas like increasing investment in the Pell Grant program (90%), establishing a grant program that provides additional resources to institutions dedicated to improving outcomes among low-income students and students of color (89%), and requiring college accreditors to consider student outcomes as part of their review of institutions (85%). 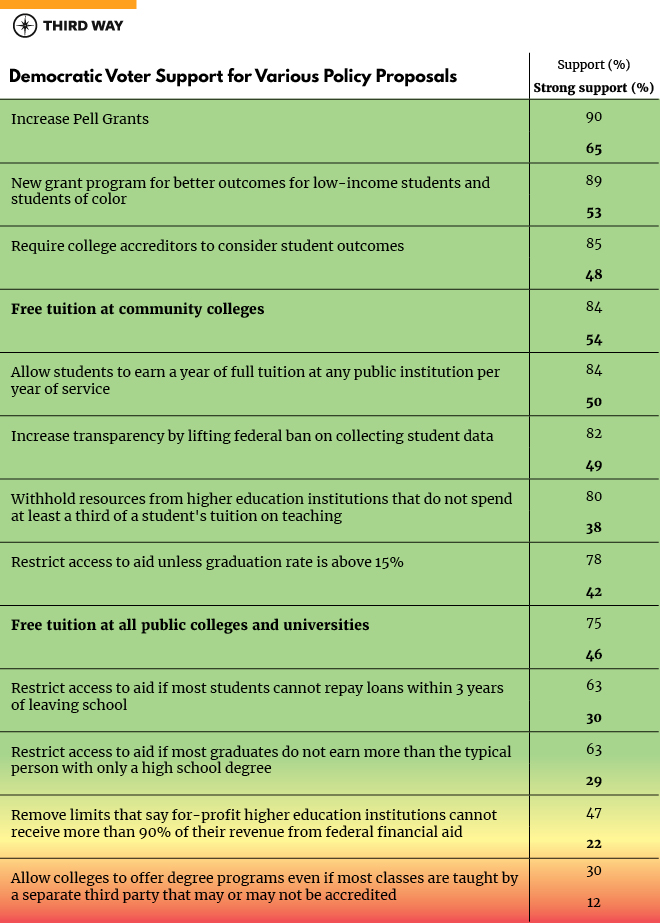 At the end of the day, Democrats understand that regardless of what students pay or borrow to attend college, it won’t fix the problems in our higher ed system if the institutions they attend fail to make them better off than if they hadn’t attended in the first place. And while another prevailing narrative would have you believe that Democrats only care about stricter oversight of the for-profit sector, seven out of ten voters—including more than three-quarters of Democrats and nearly two-thirds of Republicans—think that the federal government should ensure that students are getting a return on their investment at for-profit, non-profit, and public institutions—as opposed to just the for-profit sector alone.

There’s long been a disagreement between the parties about the role the federal government should play in improving our nation’s schools. Especially when it comes to K-12 schools, Republicans have historically been wary of allowing the federal government to weigh in too heavily in a system they believe should be under local or state control. And while it would be easy to assume that this aversion to federal oversight and regulation would hold true in higher education, too (especially given the current Department of Education’s actions to roll back crucial Obama-era consumer protections), our poll revealed that all voters—including Republicans—are currently eager for more, not less, federal oversight in higher ed. In fact, a healthy majority (67%) of Republicans agree that, “the federal government should provide basic guardrails to ensure that students aren’t encouraged to take out loans to attend predatory institutions that will leave them worse off than when they first enrolled,” compared to only 33% who said “the federal government should not try to influence where students choose to attend college and spend their taxpayer-funded grants and loans.” 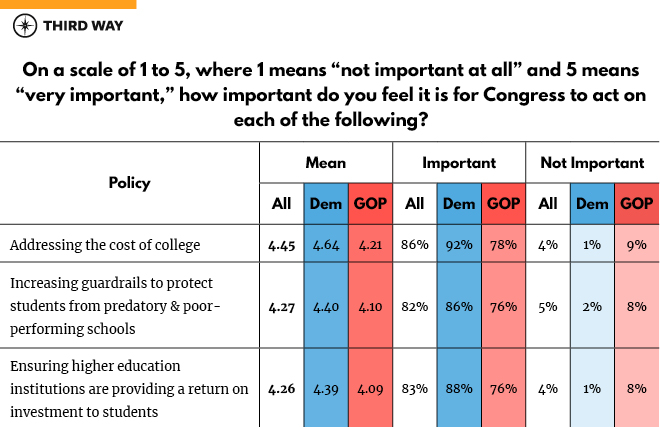 All voters—including Republicans—ranked the federal government as having the most power (more so than students, institutions, state government, or employers) when it comes to improving student loan repayment rates. In fact, only 8% of voters (6% of Democrats and 10% of Republicans) said that institutions should not face sanctions if they’re receiving federal money and are leaving most of their students unable to pay back their loans. Instead, when asked what should happen to these schools:

When given a range of options for how to improve our higher education system, Republicans strongly support an array of nuanced accountability policies, including proposals like accreditation reform that focuses more on student outcomes, increased transparency of higher education data, and setting clear federal bottom lines for institutions that make students worse off on a number of metrics. Perhaps most surprisingly given the conventional wisdom, Republican voters squarely rejected policies that would roll back important consumer protections, such as eliminating the 90-10 rule or allowing institutions to farm out their programming to unaccredited third parties. 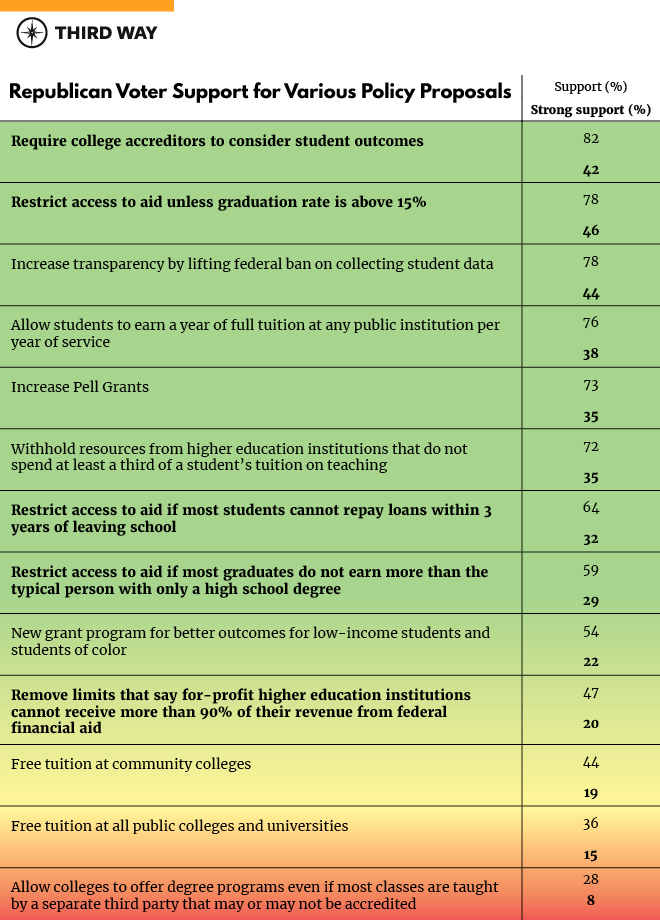 Too often in Washington, it’s easy to let popular narratives define how policy agendas are set. But as this round of public opinion research reveals, when it comes to higher education, the most frequent headlines don’t always reflect what voters in both parties think it will take to make our colleges and universities better serve their students. Voters from across the ideological spectrum believe that having a well-functioning higher ed system is crucial to the broader success of our economy, which is why they are hungry for a greater return on our significant federal investment in this area. As Congress looks to reauthorize the Higher Education Act, this new data shows that there are several policies to improve higher education that garner broad support outside of the traditional party-line talking points. This makes clear that the building a higher education system that is more accountable for the success of its students not only the right thing to do, but a winning political strategy, too.

Global Strategy Group conducted a national online survey of 1,389 likely November 2020 voters from April 30th to May 9th, 2019. The precision of online surveys is measured using a credibility interval and in this case, the interval is +/-2.6%. The margin on the subsamples is larger. Care has been taken to ensure the geographic and demographic divisions of the expected electorates are properly represented based on historical turnout.