What Issues Drove US Senate and House Race Spending?

The 2022 midterm election was unlike any in recent memory. Billions of dollars were spent on ads in an election that saw minimal changes in the makeup of the House of Representatives and, to-date, not a single blue-to-red-flipped seat in the U.S. Senate. The issues that overwhelmingly defined the cycle on the airwaves were inflation, abortion, and crime. But these issues alone were not the full story of this election.

The story of the 2022 midterms is that Republicans broadly failed to persuade swing voters, despite their record-breaking spends on economic-related ads that cast blame on Joe Biden and Democrats for 40-year high inflation and their weaponized culture war attacks. Republicans bet big on these issues to carry them to a House and Senate majority, yet they did not have an answer to Democrats painting their candidates as far outside the mainstream, particularly on abortion and the criminalization of reproductive rights.

This cycle, Democrats overperformed in battleground states and battleground districts, while underperforming in safe blue and red districts. This unusual dynamic means that where Democrats campaigned and advertised the most, they won. In other words, their ad campaigns were successful in aiding their candidates in a majority of the country’s most competitive races.

This analysis shows that Democrats in the Senate and the House had an all-of-the-above strategy to their ads and messaging–campaigns across the country made advertisement expenditures that were well distributed, talking about the economy, abortion, and crime/immigration. Meanwhile, Republicans spent on the economy, crime, and immigration ads like it was their silver bullet to victory—expenditures that far exceeded even what Democrats were spending on abortion ads—but these investments alone could not make up for poor quality candidates who leaned into MAGA extremism and had very unpopular responses when called out on their abortion views.

AdImpact tracks political advertisements and the associated ad expenditures on broadcast television, CTV, and digital platforms. This analysis examined the eight most competitive U.S. Senate races and 36 of the competitive “toss up” U.S. House races (as rated by Cook Political Report) going into Election Day. We utilized a combination of AdImpact’s defined categories and ad transcription searches for each of the platforms, Senate and House races, and issue areas to assess how much each party and their allies spent on the top issues of the cycle from Labor Day to Election Day.

The Senate and House races included in this analysis collectively spent over $537 million on economy-related ads in the last months of the campaign. In the top eight Senate races, Republicans outspent Democrats by $69 million in economy-related ads—although Democrats managed to marginally close the economic messaging gap in the final 2.5 weeks with enormous spends in Pennsylvania ($25 million), Arizona ($14.4 million), and Wisconsin ($9.9 million).

Pennsylvania saw far and away the most investment in economic ads in the last two months of the election, as nearly $78 million in ads aired, with Republicans outpacing Democrats by $15 million. Fetterman and his allies spent upwards of $25 million on economy-related ads in the final 2.5 weeks, compared to Oz and his allies who spent nearly $36 million in the same window. Yet, according to AP Votecast data, Pennsylvania voters who ranked the economy as the most important issue facing the country (51% of the PA electorate) broke for Oz 62%-36%. The GOP was likely expecting bigger margins among these voters, closer to what Democrats were winning among those who ranked abortion as the most important issue facing the country­. Interestingly, voters who said that grocery and food inflation was a factor in their vote broke for Fetterman by 4 points over Oz.

In Arizona, Mark Kelly and his allies managed to overtake the GOP economic ad spending in the final runup to Election Day, spending a total of $17.3 million on economic ads—the vast majority of that coming in the final 2.5 weeks of the cycle. Arizona voters who ranked the economy as the most important issue facing the country (45% of the AZ electorate) broke for Masters 57%-40%—a nine-point smaller margin than what Oz had in Pennsylvania. This shows the strength of Mark Kelly as a candidate, but it also highlights that the economic challenges of the nation were not necessarily the biggest determining factor for how these Arizona voters decided to cast their ballot. 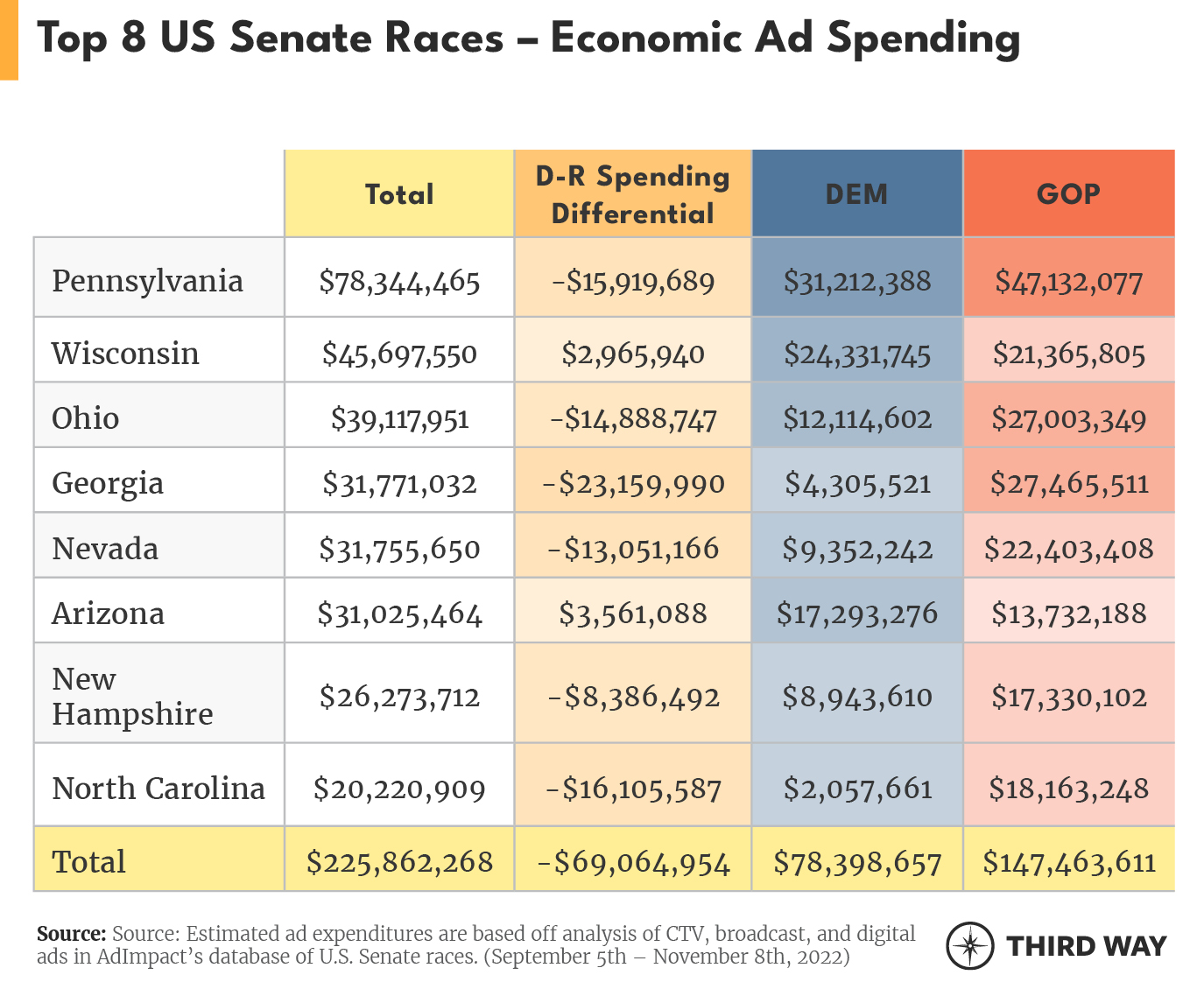 In the 36 toss up House races, Republicans and their allies outspent Democrats on economy-related ads by over $141 million—average GOP economic ad expenditures across these races was $6.2 million, compared to Democrats’ $2.3 million—yet Democrats still managed to win 26 of the 36 toss up seats.

Among these House races, the district with the highest differential in economic ad spending was CT-05, where the GOP spent $17 million more than Democratic Congresswoman Jahana Hayes and her allies, yet Hayes narrowly won re-election by just under 2,000 votes. Hayes and her allies made up for the economic ad differential by spending big on abortion ads ($10.2 million) and crime/immigration ads ($4 million), which almost assuredly played a crucial role in her successful re-election. 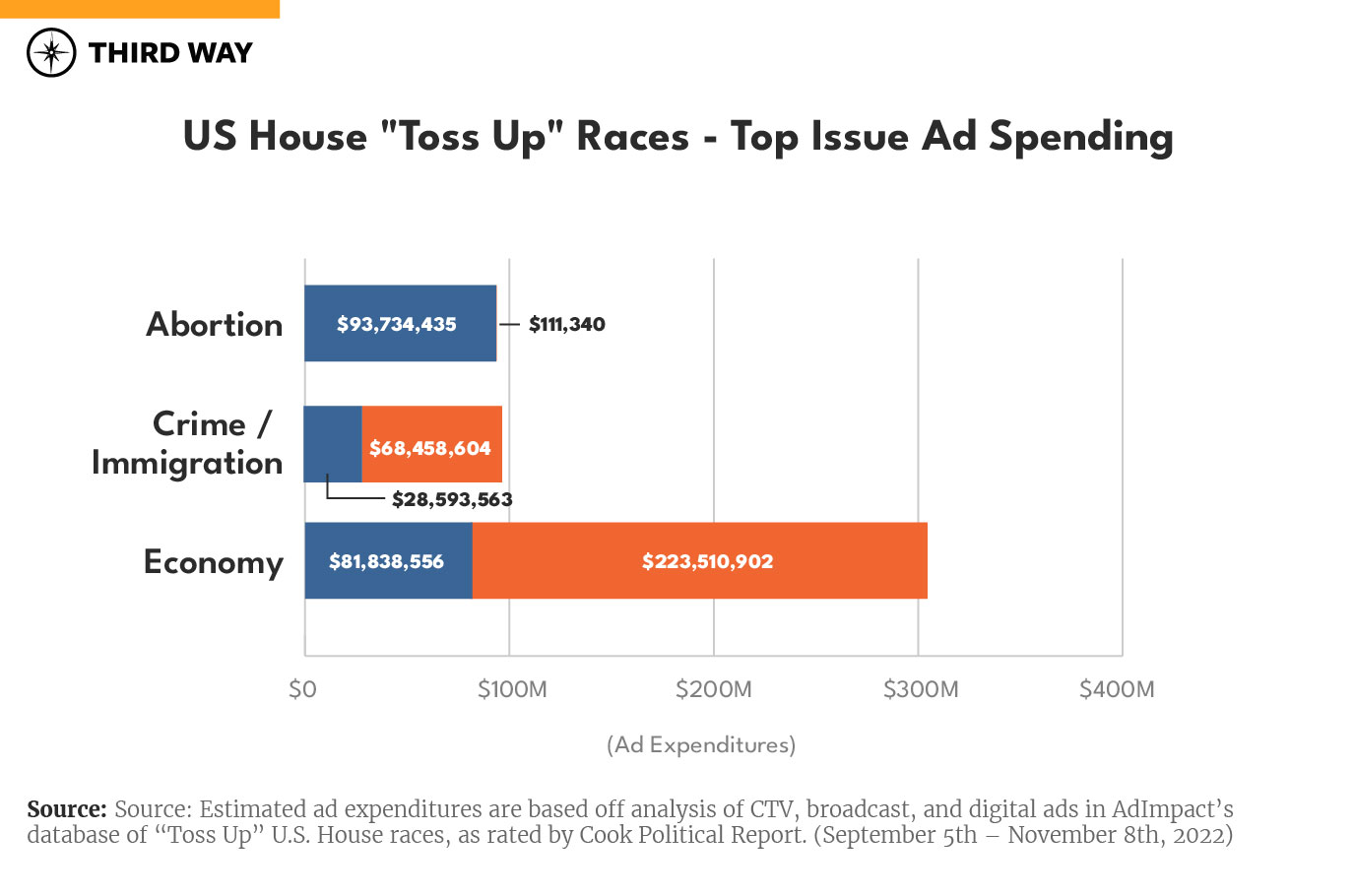 Across the top Senate and House races, campaigns spent nearly $178 million on abortion-related advertisements in the final two months of the election. Democrats in the top eight Senate races spent over $40 million on abortion-related ads just over the final 2.5 weeks of the midterms—the bulk of abortion ad spending in the Senate races was in Pennsylvania ($19.4 million), Arizona ($17.4 million), Nevada ($11.8 million), and Wisconsin ($11.6 million). Democratic spending on abortion that defined the GOP Senate nominees’ radical positions on reproductive rights helped to build on the overall narrative of this election–that the Democratic candidates were mainstream and Republican candidates were extreme.

Of the three main issue categories included in this analysis, Senate and House Democrats and their allies devoted most of their ad expenditures to abortion-related ads. House Democrats and their allies spent nearly $94 million on abortion-related ads, with the average spend being $2.6 million across the 36 toss up districts, while Republicans almost completely ignored the issue.

The Dobbs decision obviously turned the midterms on its head, putting races back in play that had been considered lost or seriously unfavorable to Democrats. Democratic spending and targeting of ads to highlight the GOP’s extremism on abortion further drove home to voters the impact of the decision, making it a salient issue in voters’ minds when they went to the ballot box this cycle despite it not registering as a top issue on many pre-election polls. Nationwide, Democrats overwhelmingly won among voters who ranked abortion as the most important issue—breaking for Dems 78%-20%—and Democratic candidates performed even better among these voters in the closest Senate battleground states.

In Pennsylvania, Fetterman won these voters (12% of the PA electorate) 82%-18%, outperforming the national average. It was a similar story in Nevada, Arizona, and Georgia. In each state, Democratic Senate candidates managed to win over 80% of voters who ranked abortion as the most important issue, and they managed to not get wiped out by the GOP among voters that ranked the economy as the top issue—keeping the vote margin under 30-points. That seemed to be the recipe for victory. 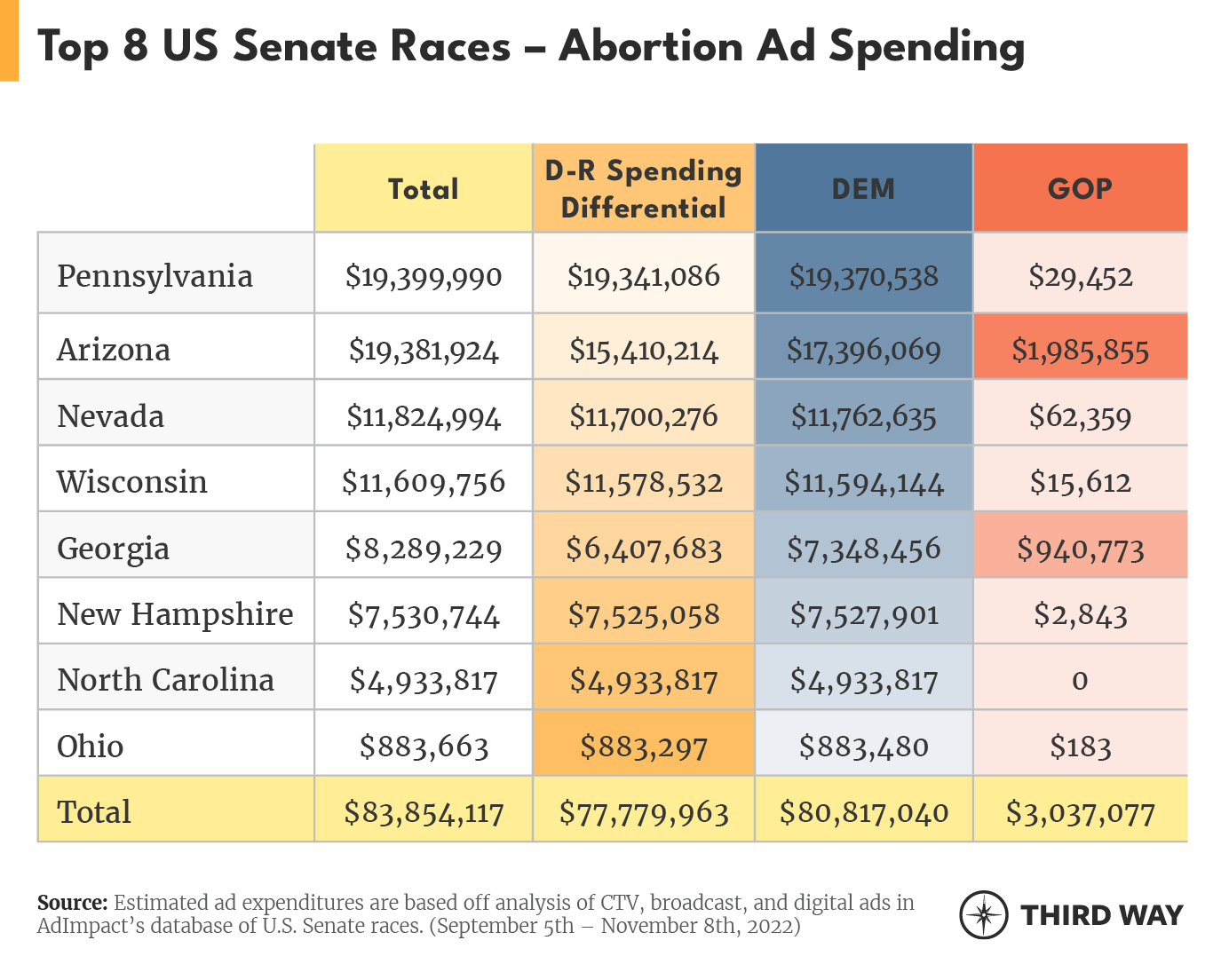 Throughout the 2022 election cycle, the GOP and their allies leaned into a fear mongering message in crime and immigration ads that painted Democrats as extremely liberal and out-of-touch on public safety and security. In many cases, these ads were extremely harsh in their language and may not have been nuanced enough to appeal to swing voters. One example of this dynamic is an attack ad against Mark Kelly that calls him liberal on the border and leans very hard on Fox News talking points—an attack that may not have struck the right tone when Kelly had already defined himself as a moderate on funding border security and law enforcement.

Republicans and their allies in Senate races spent over $185 million on crime and immigration ads in the final two months of the election, compared to Democrats’ $52 million. Races where Democrats spent the most to rebut the GOP’s attacks and defend their record included Pennsylvania ($16 million), Wisconsin ($9 million), Arizona ($7 million), and New Hampshire ($6 million). 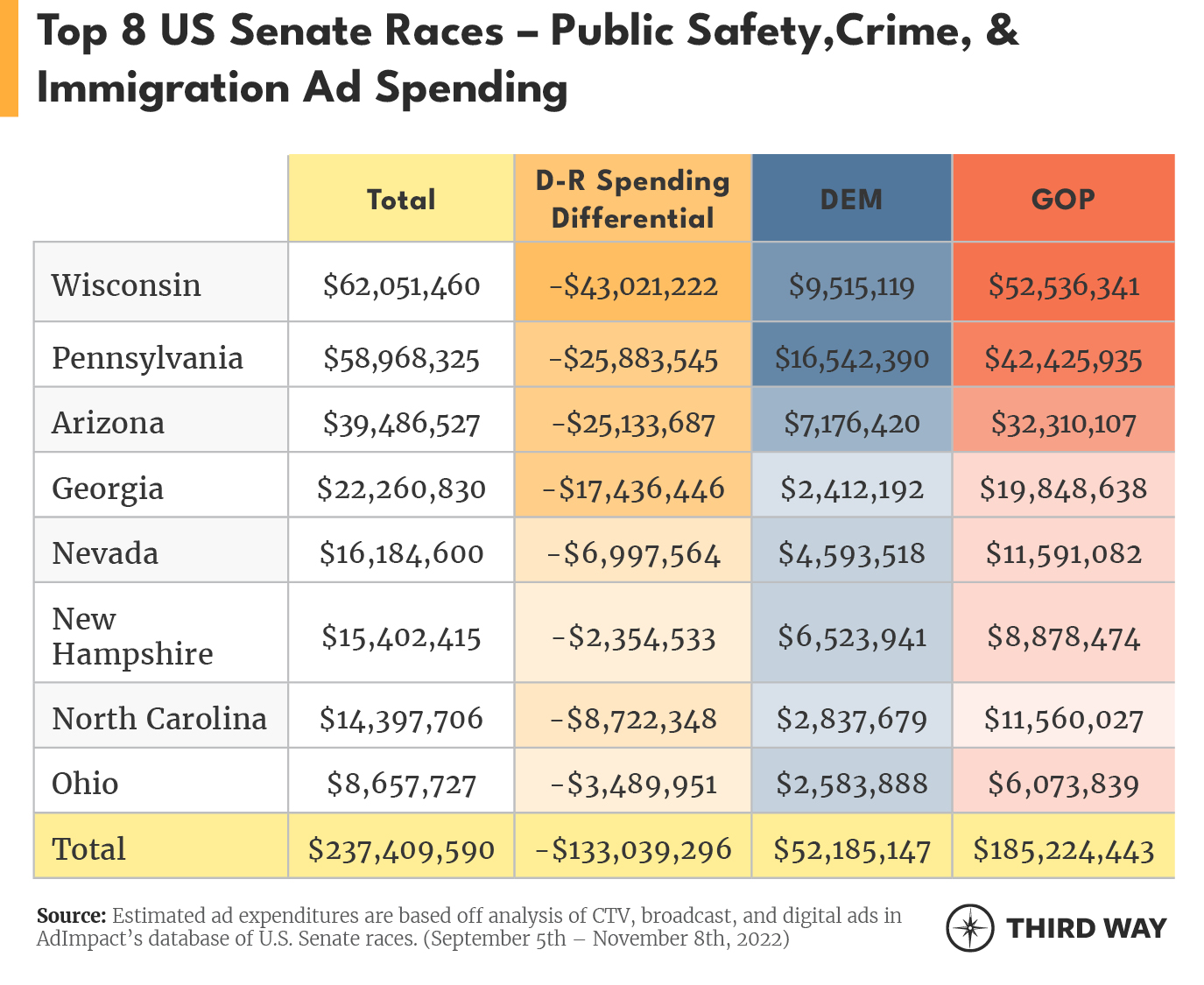 Between the top Senate and House races, over $334 million was spent on crime and immigration ads between Labor Day and Election Day—with Republicans outspending Democrats 3-to-1.

According to AP Votecast, Democratic Senate candidates in the battleground states all managed to keep the margins relatively close among voters who ranked crime as the most important issue facing the country (winning upwards of 40% of voters in Arizona, Pennsylvania, and Georgia, and 38% in Nevada). This can partly be attributed to many Democratic campaigns getting out in front of the crime attacks and defining their positions early on—as David Shor notes, the single most effective ad category that Blue Rose Research tested this cycle on the Democratic side was ads that rebutted the defund the police attack, being “1.7 or 1.8 times more effective than the average ad” this cycle.

In Wisconsin, one of the closest Senate battleground states where Democrats came up short, it’s not implausible that the GOP’s exorbitant influx of economy, inflation, and crime ads may have been just enough to put Johnson over the top (Johnson and his allies outspent Barnes by $43 million on crime attack ads, the largest differential of any Senate race). While Ron Johnson was considered a relatively weak candidate for an incumbent, he had a slightly more favorable electorate when it came to these issues and how voters broke on them. Barnes also performed 5 points lower than Fetterman among voters who ranked the economy as the top issue (48% of the WI electorate); and Wisconsin voters who ranked crime as the top issue (9% of the WI electorate) broke for Johnson by a 36-point margin, compared to Oz’s 26-point margin.

Among the toss up House races, the GOP and their allies spent $68.5 million on crime/immigration-related ads compared to Democrats’ $28.6 million—adding up to a $40 million GOP advantage. The average GOP crime/immigration ad expenditure in these races was $1.9 million compared to Democrats’ $794,000. The race with the highest crime/immigration ad spending differential was OH-13, where the GOP spent $8.5 million to Democratic candidate Emilia Sykes’ $2.3 million. Despite this race having the most GOP crime ad expenditures of the 36 toss ups, Sykes won the race by 5.2 points, out-performing Biden’s margin in the district by 2 points.

Where the GOP gained the upper hand and most likely saw the greatest reward for its crime and immigration attacks were in the five New York congressional districts it managed to capture—NY-03, NY-04, NY-17, NY-19, and NY-22. The GOP and their allies spent almost $15 million on culture war attacks across these five districts (compared to only $8.2 million on economic-related ads). In a place like New York where abortion and election deniers were not as directly on the ballot, these crime attacks seemed to gain more traction and ultimately deliver Republicans key seats that were enough to determine the House majority.

While inflation, abortion, and culture war ads dominated the majority of issue ad spending, it cannot be ignored how flawed the Republican nominees were this cycle, particularly in Senate races. Advertisements that attacked the character of candidates played a central role in the ad spending of the midterms, especially from Democrats, who outspent Republicans by nearly $35 million on “character” ads in the top Senate races. These ads likely aided Democratic efforts to drive up the disapproval of many extreme Republican candidates, as this became a central tactic in every Democratic Senate campaign this cycle. Whether the GOP makes similar mistakes to nominate weak candidates in 2024 as it did this year remains another question—Democrats may not be as fortunate to be running against robotic MAGA extremists and out-of-touch celebrities in the opposition as they were this year.

Whatever the case, political pundits and analysts will be analyzing this remarkable election cycle for years to come—an election with record amounts of ad spending that resulted in minimal changes in the makeup of Congress and defied even the most experienced political strategists’ predictions.