What Case Are Senate Campaigns Making in the Final Weeks?

Labor Day weekend marked the official beginning of peak general election season–it’s when the bulk of ad spending normally begins going into full effect. Using data from AdImpact, which tracks political ads and expenditures on broadcast television, CTV, and digital platforms, we examined the eight most competitive U.S. Senate races (as ranked by FiveThirtyEight’s Senate Forecast) to assess how much each party and their allies have spent on the top issues of the cycle in the final run-up to Election Day.1

Issues around the economy, inflation, and the costs of day-to-day life have continued to rank highest among voters’ concerns across party affiliation ahead of Election Day. 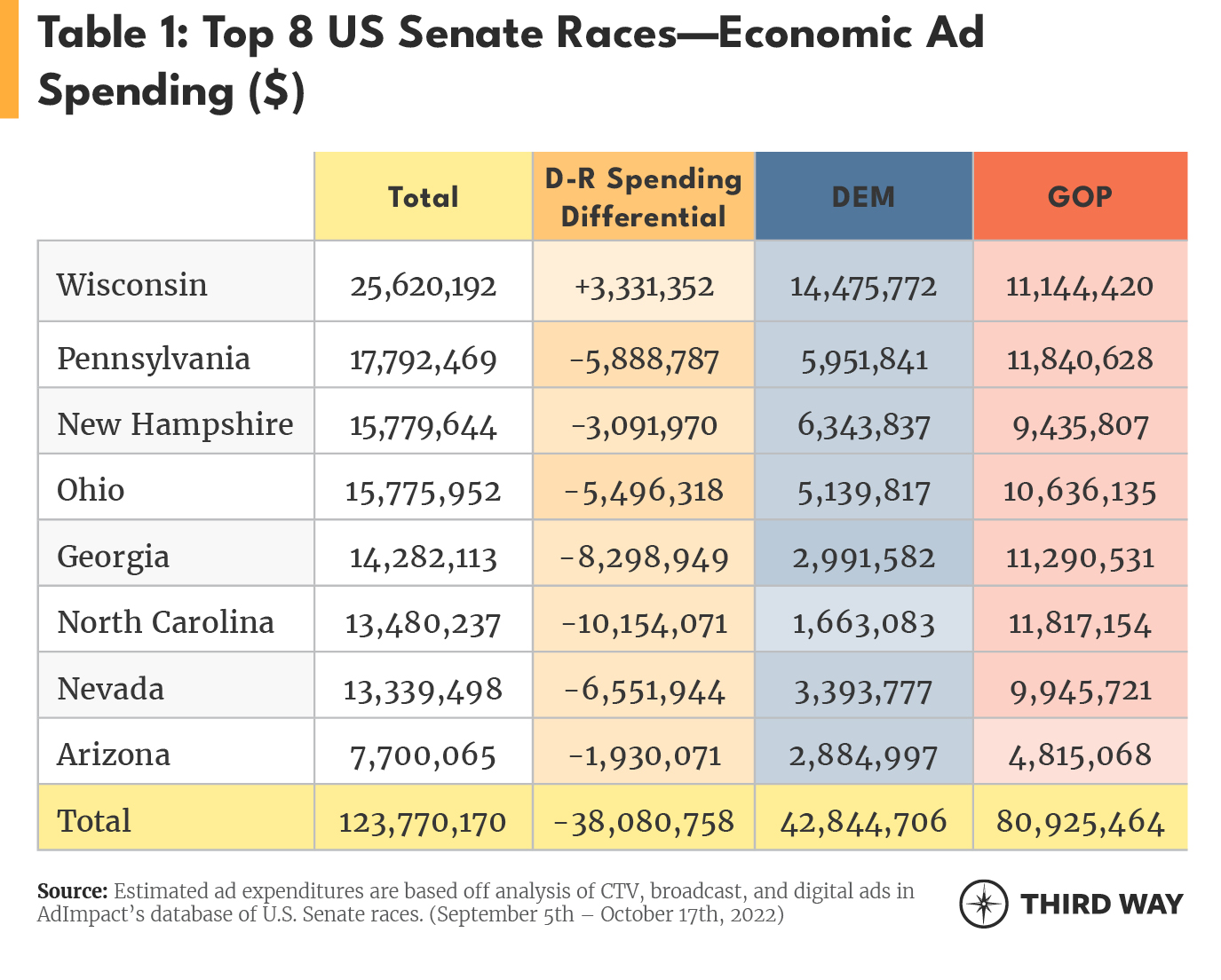 Nevada is one of the most watched U.S. Senate races in the country, but this race ranks low on economic ad spending–especially from Democratic U.S. Senator Catherine Cortez Masto and her allies—spending an estimated $3.4 million on economic related ads since Labor Day compared to Republicans’ $9.9 million. Georgia’s Senate seat is similarly a prime target for the GOP to flip, but Democratic U.S. Senator Raphael Warnock and his allies have been vastly outspent on the issue of the economy since Labor Day—spending only an estimated $3 million on economic related ads going into October 17th ($8.3 million less than the GOP).

Both seats will be necessary for the GOP to flip if they are to win back the U.S. Senate. The most recent forecasted FiveThirtyEight popular vote outcome has Warnock withonly a 0.2-point lead in Georgia (49.3% to 49.1%)—down marginally from Warnock’s 0.8-point lead on September 5th—while the forecast has the GOP challenger in Nevada, Adam Laxalt, leading Senator Cortez Masto by 0.4-points—a complete reversal of Cortez Masto’s 2.1-point forecasted lead on September 5th.

The only state where Democrats are outspending the GOP in economic-related ads is in Wisconsin ($3.3 million DEM advantage). Despite this, GOP Senator Ron Johnson is still leading Democratic nominee Mandela Barnes in the forecasted FiveThirtyEight popular vote outcome, 52% to 48%.

Notably, Ohio Democratic U.S. Senate nominee Tim Ryan and his allies have prioritized spending on economic-related ads since September 5th over abortion and public safety ads—spending the fourth most of any Democratic U.S. Senate race at $5.1 million. The forecasted FiveThirtyEight popular vote outcome has narrowed marginally in Ryan’s favor since Labor Day by 0.2-points, but J.D. Vance still has a 52% to 48% lead.

The state with the biggest party differential in economic ad spending is North Carolina, where the GOP is outspending Cheri Beasley and her allies by $10.2 million. Since September 5th, the GOP Senate nominee has expanded his lead in the forecasted FiveThirtyEight popular vote outcome by 2.1-points over the September 5th margin.

Ad spending isn’t the only factor in these races, of course, but it does indicate what each party believes are its strongest arguments to sway voters. If Republicans are able to make enough gains in these key Senate states to nab the majority, their economic pitch will surely have been a major piece of their winning strategy.

Economic issues are key this cycle, but they aren’t the only play in the GOP playbook. In election after election in the era of Trumpism, Republicans have focused on culture war issues in the closing weeks of the campaign, and 2022 is no exception. Republicans and their allies have unleashed a barrage of ad spending on cultural issues around public safety, crime, and immigration since Labor Day–outspending Democrats and their allies on public safety and immigration by an estimated $83 million on CTV, broadcast, and digital ads in the top eight U.S. Senate races (see Table 2). 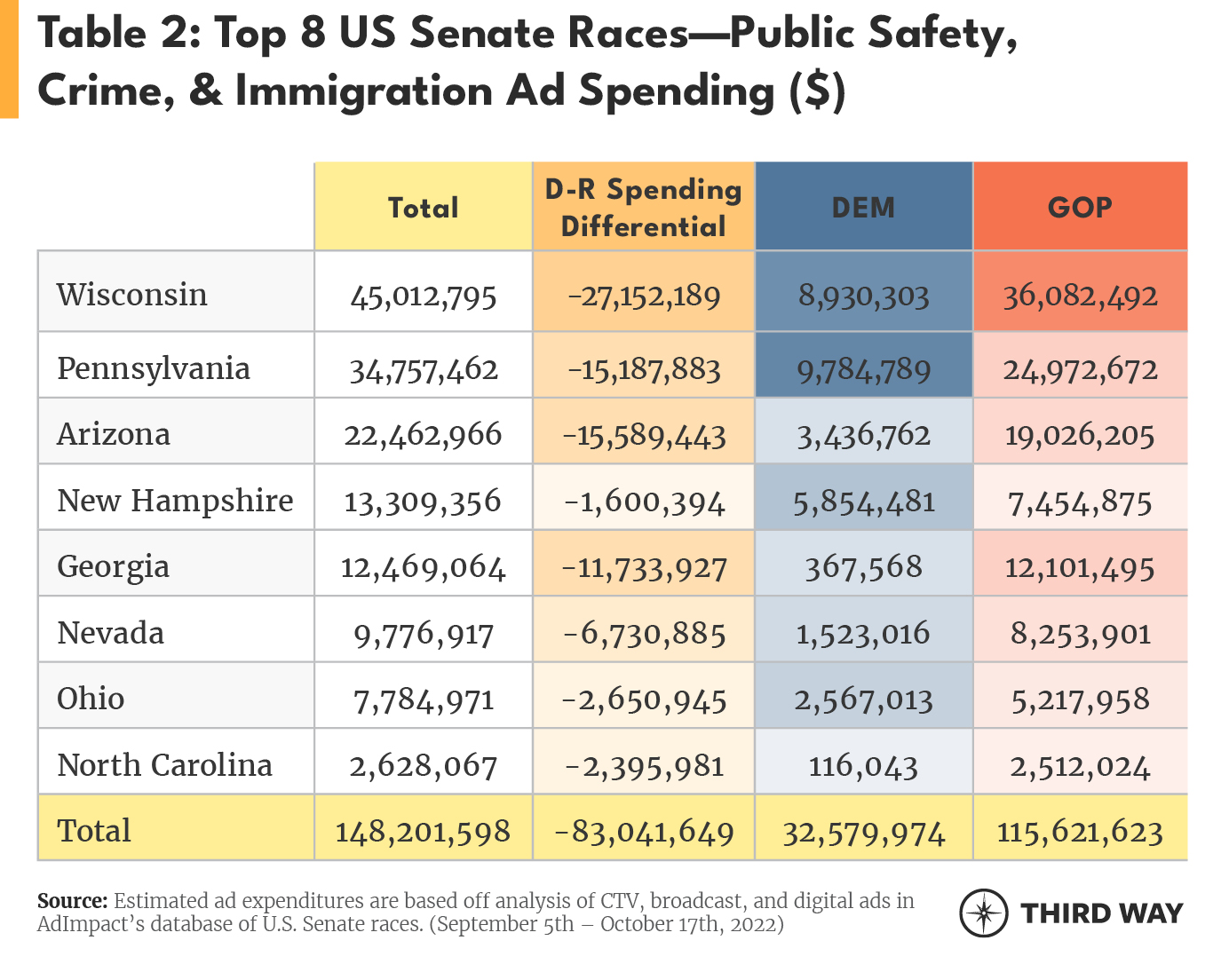 Democratic candidates have responded to these attacks across most major battleground states with ads that include law enforcement validators and messages that Democrats are, in fact, funding law enforcement, border security, and public safety programs. However, the salience of the GOP’s message and the amount of money that they have put behind these attacks, combined with a weak Democratic brand on handling these issues to begin with, may be enough to just eke out the closest races this cycle.

Democrats entered the month of September looking strong in the closest toss-up Senate races, but since then, Republicans in the top two states (WI & PA) where the GOP has spent on these attacks gained substantial ground. Since September 5th, the forecasted FiveThirtyEight popular vote outcome in Pennsylvania has closed from Fetterman leading 51% to 46% to Fetterman barely leading (49.7% to 48.2%). Similarly, in Wisconsin, Republican Senator Ron Johnson’s lead was a mere +0.4 (50.2% to 49.8%) in the forecasted FiveThirtyEight popular vote outcome on September 5th but has since expanded to Johnson +4.2 (52.1 % to 47.9%).

Notably, Democratic New Hampshire Senator Maggie Hassan and her allies have maintained the closest margin in ad spending to her GOP opponent, Don Boldouc, on the issue of crime/immigration ($1.6 million GOP advantage) and second closest margin on the economy ($3 million GOP advantage) of all the Democratic candidates trailing in spends since Labor Day. (Though this is due in part to less overall ad spending in this race compared to the other top races.) Senator Hassan still maintains a 5-point lead in the FiveThirtyEight popular vote outcome (52% to 47%) with barely any budging of her support in the model since September 5th—likely aided by the nomination of her far-right opponent in the GOP primary.

Things were looking relatively good for Democrats compared to historical expectations a few weeks ago, but now the momentum seems to be behind Republicans in many of these key races. If they manage to overcome their candidate quality problems and win these Senate races, it will no doubt be in large part because they were able to deploy culture issue attacks to paint Democrats as extreme.

To little surprise, Democratic U.S. Senate candidates and their allies have outspent Republicans by over $38 million since Labor Day on advertising around abortion. Democrats in Arizona, Pennsylvania, New Hampshire, and Nevada have relied heavily on expenditures messaging on the issue and the GOP’s extreme position (see Table 3). But Arizona Democratic Senator Mark Kelly and his allies have spent the most to advertise on abortion overall ($9.5 million DEM advantage). In fact, the Democratic ad spending on abortion in Arizona is higher than the combined economic and public safety ad spends in the state since Labor Day. 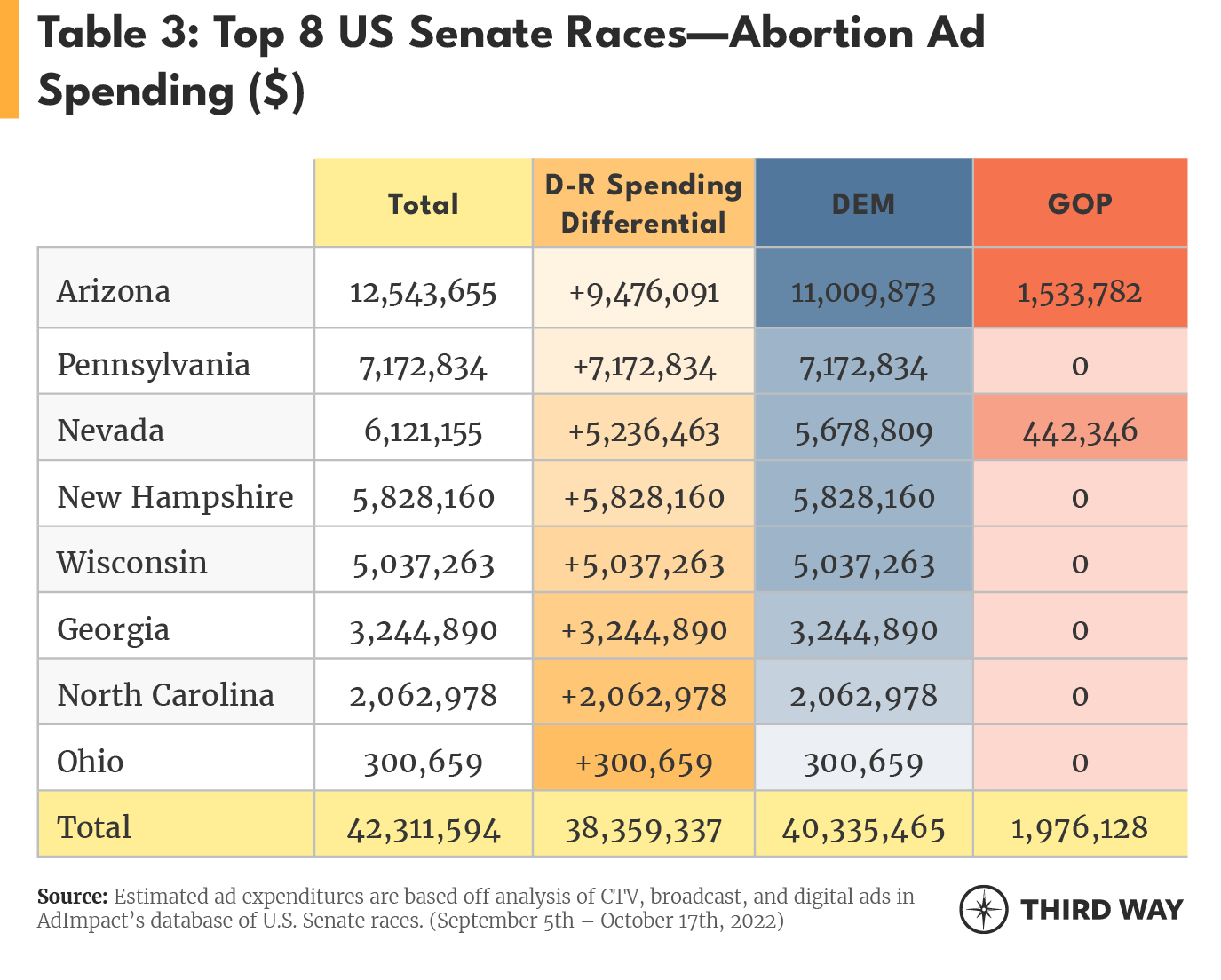 If Democrats are able to hold on in these nail-biter races, it will be in no small part due to the overturning of Roe.

There are still just under two weeks left until Election Day, with tens of millions of voters left to cast their ballot. According to AdImpact, in the closing weeks of the midterm election cycle, there is over $247 million in airtime reservations for U.S. Senate races alone, with Pennsylvania reservations leading the pack. The closing arguments candidates choose to deploy with voters in the final days of this midterm election cycle will indicate what each party thinks it needs to do to persuade voters—and the results will give us insights into which appeals were more effective as we look to 2024 and beyond.