What are Battleground Dems Running on in the Midterms?

Since the Dobbs decision, the political landscape has shifted significantly against the GOP. One way to understand what issues are defining this election cycle and what campaigns are communicating to voters is by analyzing the advertisements that they are creating and paying to serve up to folks in their districts and states.

Wesleyan Media Project has undertaken substantial analysis of the advertisements being run in national cable and broadcast television during this election cycle, which we utilized for this analysis of U.S. Senate and House races as we head into the final 50 days of the 2022 midterms.

The fall of Roe has altered the playing field dramatically.

Democrats in the toughest House and Senate races are consistently now running on abortion rights and hammering Republicans for their extreme positions on the issue. Clearly, they understand how the post-Dobbs environment is splintering the traditional GOP coalition and driving up enthusiasm among pro-choice Democrats and Independents. One substantial effect: there are prime persuadable swing voters for the first time this year.

As Wesleyan Media notes, ads by or on behalf of Senate Democratic candidates mentioning abortion increased from 14 percent of pro-Democrat Senate ads between May and mid-June to 24 percent between June 20th and August 7th–becoming the top issue mention in Democratic Senate ads (see table 1). Meanwhile, Senate Republican ads mentioning abortion dropped from 19 percent to 6 percent post-Dobbs. This is an issue the GOP wants to run as far away from as possible, pivoting to safer territory like inflation and the economy. 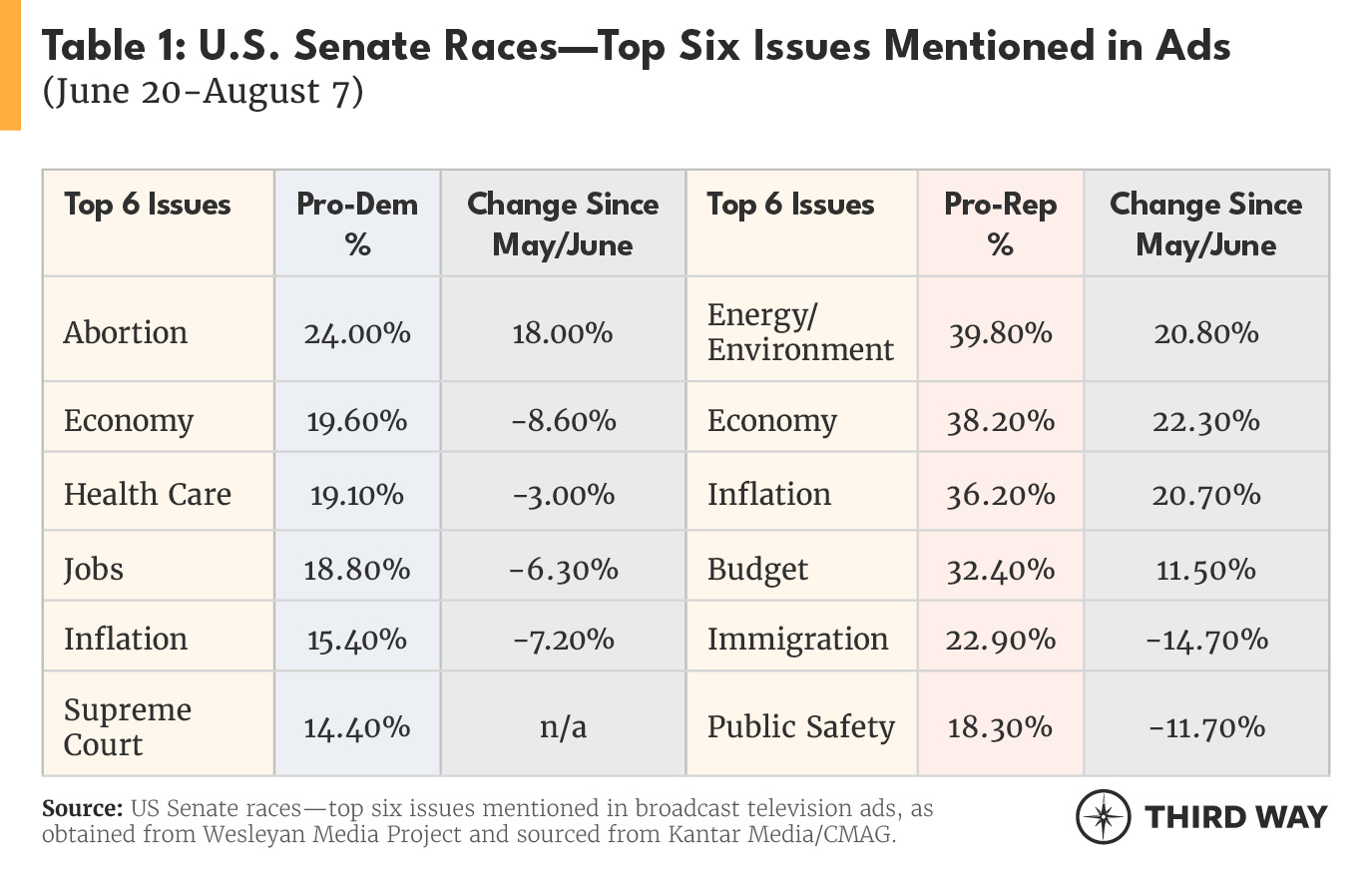 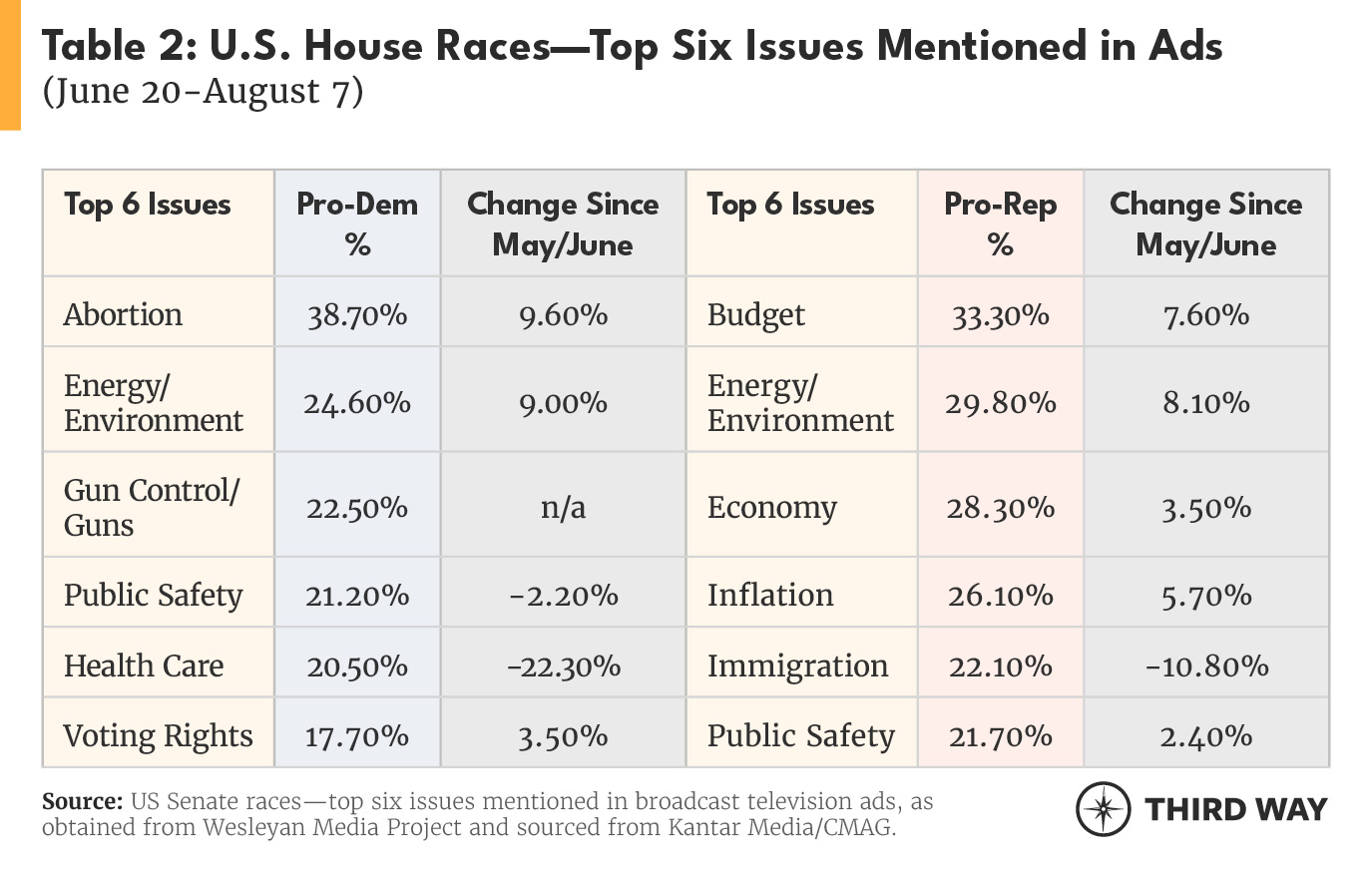 Democrats are highlighting their opponents’ extreme positions on the issue while also adding in the element that the GOP is “taking away our rights,” as Angie Craig (D-MN) does in the ad linked below. Meanwhile in Arizona, the Democratic Senate Majority PAC is making the Court’s decision real by highlighting the consequences for ectopic pregnancies.

Democrats’ current strategy harkens back to the 2018 campaign, when they blasted Republicans for wanting to take away another right from the American people by repealing the ACA. Democrats seem to now similarly want abortion to be at the forefront of voters’ minds as they begin sending ballots in, trying to make this the issue of the election instead of a referendum on the economy and inflation.

Now that the Inflation Reduction Act has been signed into law, Democrats can go to voters and say that they are making tangible progress to address inflation and lower the cost of energy and healthcare.

The House Majority PAC took their first shot at this with their new ad “Deliver,” which Blue Rose Research found tested in the top 10 percent of ads this year and drove significant movement on Biden’s approval, Democratic Party favorability, and the House horse race.

For comparison, GOP House candidates and dark money groups are flooding the zone with ads attacking Democrats on a ballooning budget (33.3%), energy (29.8%), economy (28.3%), and inflation (26.1%) as Americans for Prosperity does here.

The ad data indicates that Senate Democrats are doing well with campaigning on a making-ends-meet agenda–economy, jobs, and inflation are still ranking high in the top Senate Dem ad issues–but ads by or on behalf of House Democrats mentioning jobs (17.7%) and the economy (10%) are far below what the House GOP side has been running. Senator Mark Kelly (D-AZ) and Congresswoman Sharice Davids (D-KS) both rolled out making-ends-meet, working-class ads that could serve as models for additional advertising on this subject between now and Election Day.

Democrats have yet to respond to GOP crime and immigration attacks.

Below the economy, advertisements mentioning immigration and public safety are the next highest-ranking ad issues aired from both Senate and House Republicans. Although immigration ads have fallen significantly in the post-Dobbs environment, likely due to GOP primary races ending, they still come in at nearly 22 percent in the GOP House and Senate ad mentions, and public safety/crime ads are hovering around 20 percent.

Both crime and border security are major issues among voters that Democrats have been hemorrhaging–especially Latino voters. The NRSC has been targeting this significantly among Latino voters in both Nevada and Arizona.

For comparison, public safety is #4 in Dem House airings and #8 in Dem Senate airings, while immigration/border security is nowhere near the top 10 issues for any Dem contests. Democrats would be wise to ensure they are sufficiently pre-butting and responding to GOP attacks on public safety and immigration. Congresswoman Spanberger’s campaign savvily did this in an attack ad against her GOP opponent, and Democratic congressional candidate Gabe Vasquez (NM-02) did so by using a former county sheriff as a law enforcement validator.

With less than 60 days to go, we can be sure that the messaging and news to which candidates must respond will evolve to some level between now and Election Day. In just the last 80 days, Roe was overturned, a series of major legislative wins for Democrats and President Biden have been signed into law, and Donald Trump’s legal woes have once again captured the attention of the media. Though other issues may arise before November, there’s little doubt abortion, inflation, immigration, and crime will be hotly debated on the airwaves over the next few weeks.