Public policy debates in Washington, D.C., often diverge from how people outside the Beltway think about a topic. Congressional hearings all too often tackle issues in a way that is disconnected from voters’ every day lived experiences. This reinforces perceptions that those in power are not focused on what matters or, at least, what matters to them.

Is technology one of those issues? Third Way partnered with Global Strategy Group on a public opinion research project to find out. We sought to better understand Americans’ views on technology, and whether and how these views line up with the technology policy debate in Washington. The project began with four focus groups: two each in Detroit, MI (with Democrats) and Milwaukee, WI (with swing voters). These focus groups then informed a national survey of likely 2020 voters.

What we found was a wide gulf between voters’ concerns and the debate in Washington. Voters say that their top technological concern is keeping their personal and financial data secure, and they want leaders to step up to address this problem. Majorities feel that both policymakers and technology companies are not doing enough to safeguard their information. It is clear that on technology policy, like on many other issues, voters think that leaders are not focused on what matters to them.

There is not a large trove of publicly available opinion research on voters’ views of the intersection of technology and public policy. So, it was important to begin this project by stepping back and asking some conceptual questions about how voters conceive of technology.

In the initial round of focus groups, voters were quick to provide examples of specific technology companies (e.g., Facebook), but they struggled to define the overall term. When asked what they think of when they hear “technology company,” Some responses were nonspecific, such as “they provide something that everyone wants,” while others were tautological, like “they design and make technology.” But the survey phase of this research yielded a breakthrough on how voters define technology companies: Companies whose products are produced or consumed using electronics are technology companies in the minds of voters, while those that use human or non-electronic elements in production or consumption are not. In this way, respondents view a software company as a technology company. But they do not categorize a pharmaceutical company the same way, even if the use of technology is a fundamental part of their business. 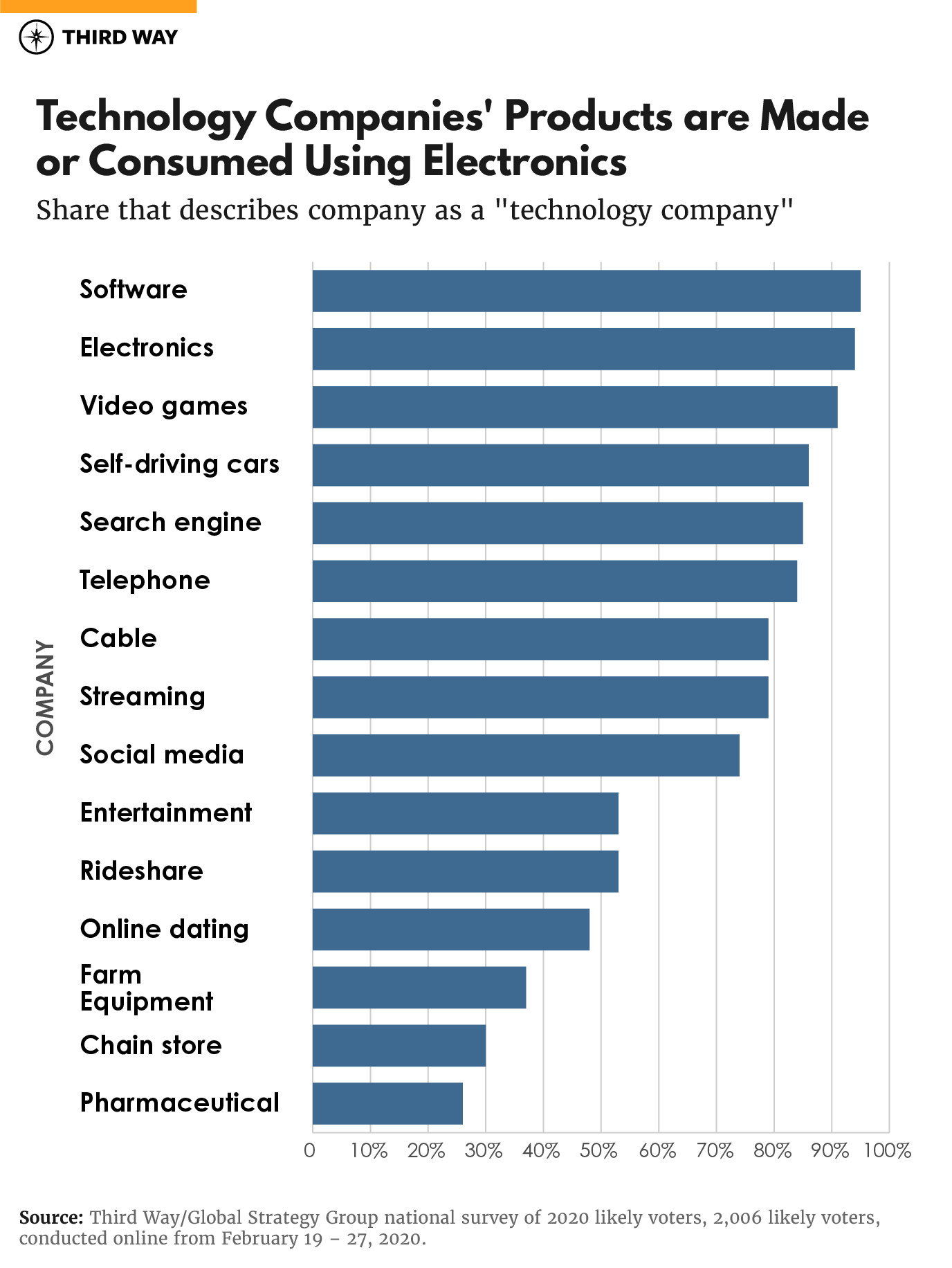 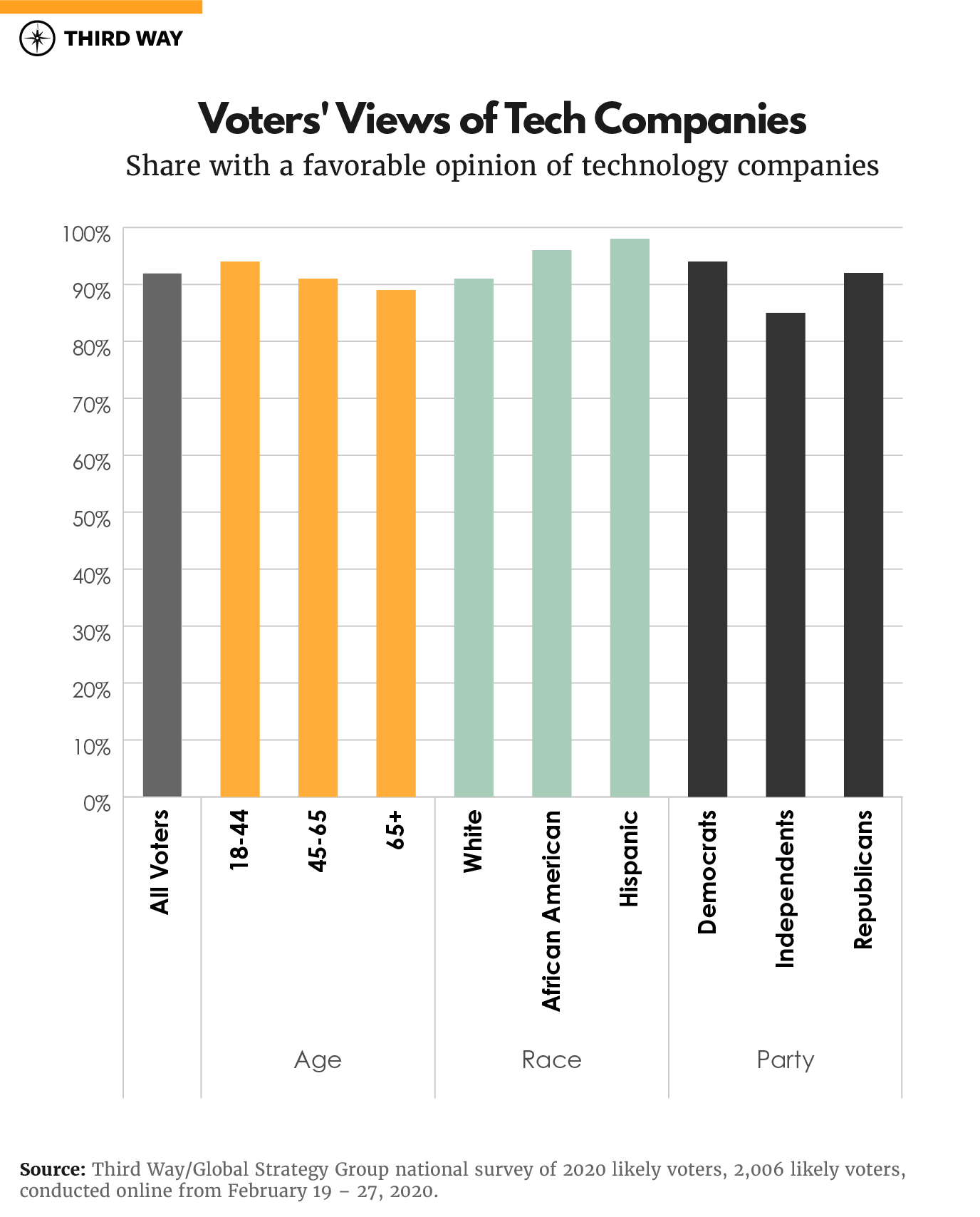 The root of voters’ concerns on technology policy is the security of their private information, and their apathy toward how leaders have handled technology comes from their perception that these actors are not doing enough to address this concern.

Note: This project was completed before the public began to respond to Coronavirus. Sentiments related to those responses, like the use of technology during physical distancing, as well as the rapid downturn in the U.S. and global economies, may not be reflected in our data.

Voters identify the security of their personal information online as a top priority.

In the survey portion of the research, we asked voters to identify their top priorities for policymakers, and protecting their personal information online was near the top of the list. This should be a wake-up call for leaders who may assume the issue is of secondary importance. It is not just near the top of voters’ priority list on technology policy, but it ranks among their top policy priorities overall. Sixty-one percent say that protecting the security of their personal and financial information from hacking and misuse should be a top priority for policymakers in Washington, and 65% say the same about managing cybersecurity threats from abroad. 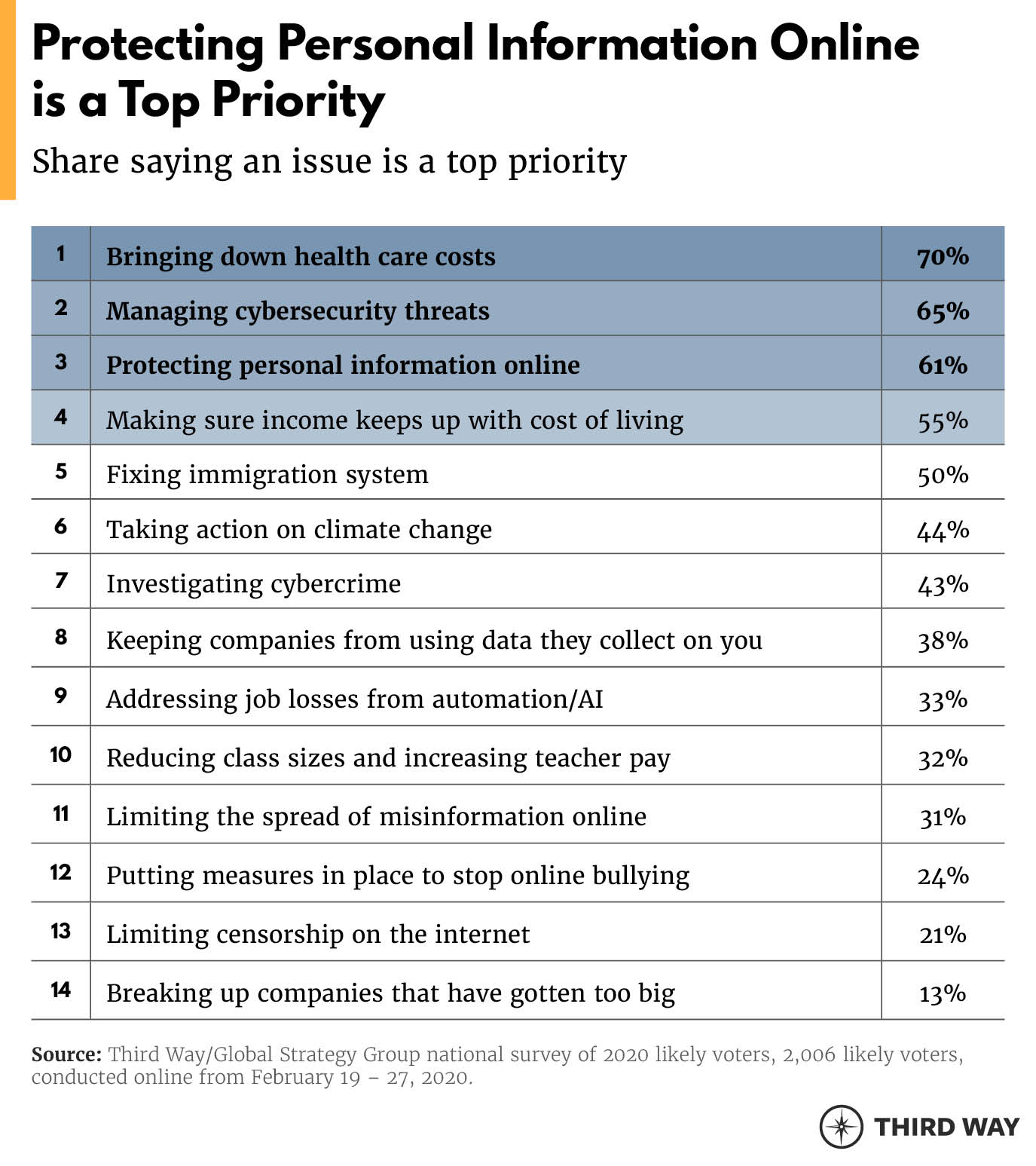 Protecting personal information online ranked slightly below reducing health care costs on voters’ priority list, but it was prioritized above crucial issues like making sure wages keep up with the cost of living and fixing the immigration system. Two-thirds of voters say that they “frequently worry” about others accessing their personal or financial information. Voters’ prioritization of this issue comes into fuller focus after learning about their experiences online. One in four have been victims of cybercrime—a startlingly high rate of crime victimization compared to other kinds of crime—with most impacted respondents citing fraudulent charges or having their data stolen. The anxiety about cybercrime victimization was also reflected in the focus groups, where voters reported that they regularly check their bank balance, often two to three times a day, out of fear that someone might steal their funds. In fact, seven-in-ten voters say they check their accounts at least once a week to ensure they have not been hacked.

Voters say that protecting personal and financial information online is a significantly greater priority than other technology issues that are more frequently the focus of policymakers and advocates. For example, only 38% say that keeping companies from using data they collect about you online is a top priority, 31% say the same about limiting the spread of fake news on the internet, and 21% cite promoting free speech online. And a paltry 13% think it should be a top priority to break up technology companies that have gotten too big. 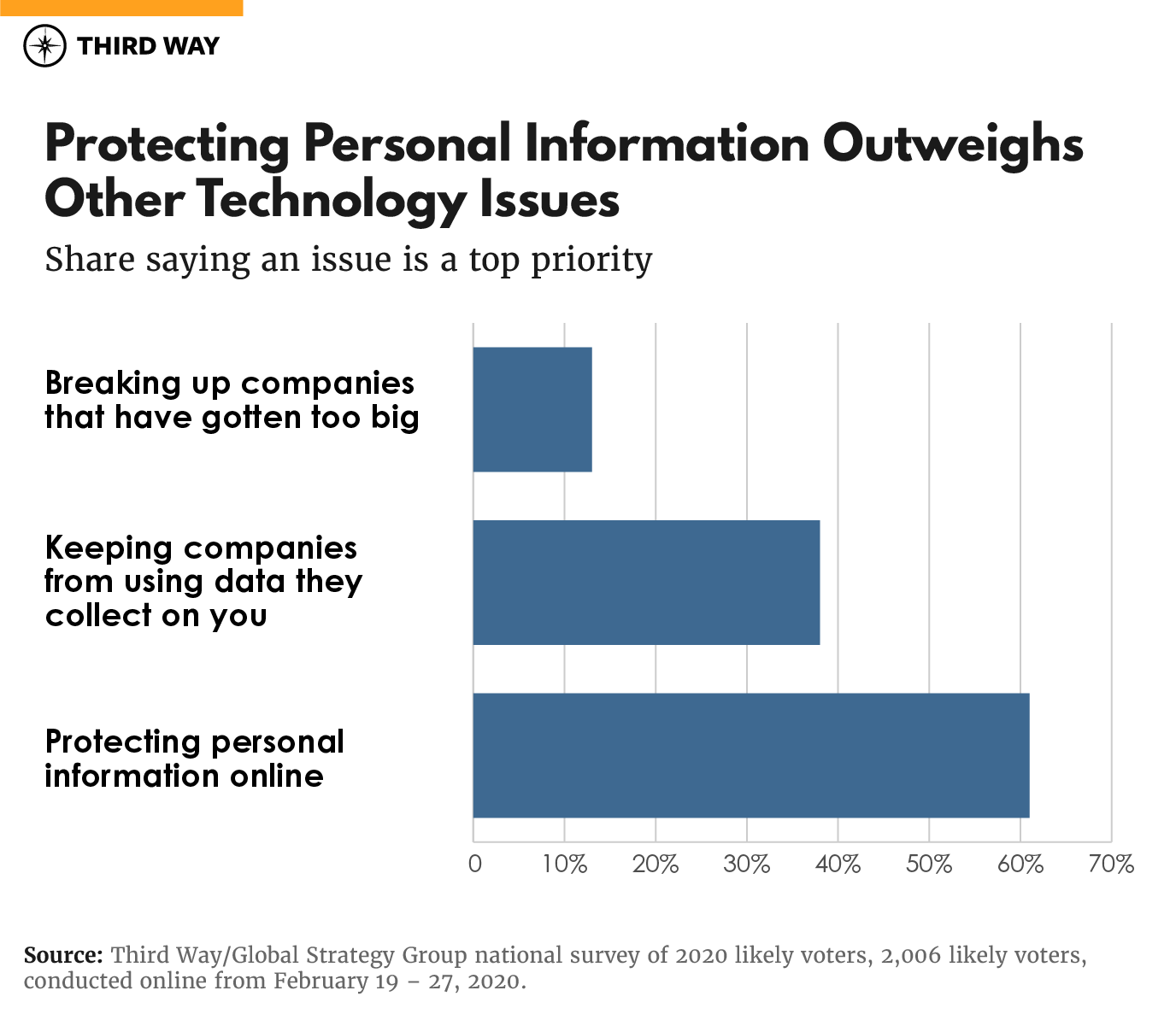 Voters perceive challenges with technology as coming from both here at home and abroad. Ninety percent worry that technology has made us vulnerable to cyberattacks from hostile foreign powers. And 84% worry that technology is having a negative impact on young Americans. But overall, 83% believe that the benefits of technology ultimately outweigh its drawbacks.

Voters want policymakers and technology companies to do more to secure their data.

Voters want leaders in both government and industry to take concrete steps to address the security of their personal and financial information online, and they have a defined understanding of the role they want policymakers and technology companies to play. Voters primarily task technology companies with safeguarding their information; 53% say it is companies’ job to ensure the safety of data stored online. But they say it is government’s duty to go after bad actors; 61% say the federal government should be responsible for going after cybercriminals. And a whopping 78% say it is the federal government’s responsibility to manage foreign cyberthreats from countries like Russia, Iran, and China. 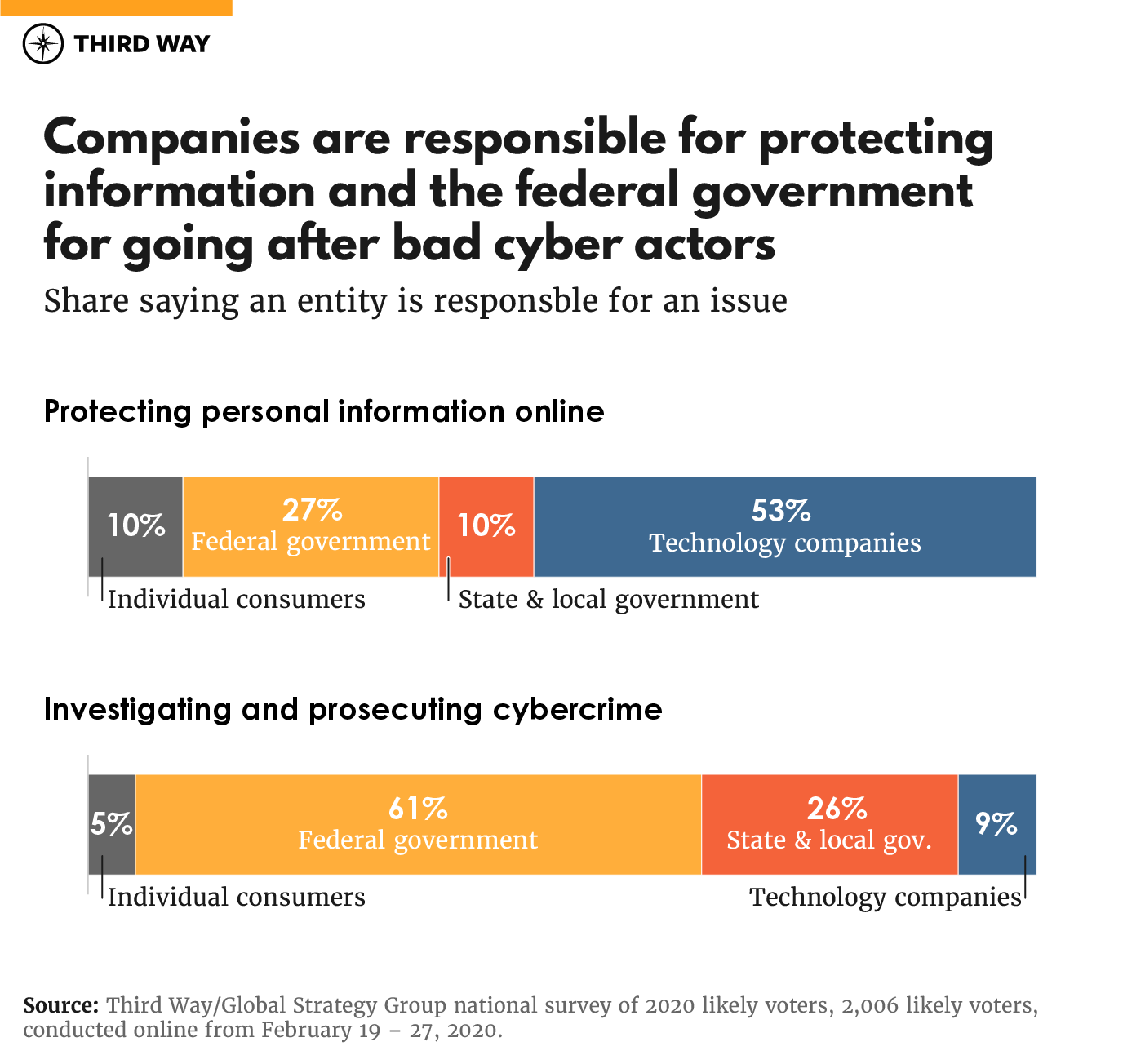 Voters delineate responsibilities for companies and policymakers on protecting their private information. But they have an overarching sense that both actors are falling short right now. Eighty-seven percent worry that companies are not doing enough to protect their information online, and 82% say the same about policymakers.

When it comes to policymakers, voters believe they are falling short in part because technology is evolving too fast for them to keep up. Fifty-three percent cite the rate of technological change as the reason why policymakers are failing to sufficiently address their concerns, compared to just 20% who say that the biggest problem is that policymakers don’t know how to talk about technology issues.

Voters see both commonsense steps that could address their concerns…and a lack of progress.

When it comes to actions that leaders can take to protect personal and financial information, voters prioritize tangible steps that could make an actual difference. But they do not perceive a great deal of progress, and when action is taken, they often question leaders’ motivations.

Voters would like to see technology companies focus on commonsense steps like improving password security. Forty-seven percent say such a step would make them “strongly believe” a company is committed to their best interests. That compares to just 24% who say a new ad touting a company’s commitment to protecting their data online would make them “strongly believe” it is committed to their best interests.

Ultimately, voters believe progress is being stifled by self-interest and inaction. Focus group participants questioned companies’ motivations, with one participant saying “[Do they care about fixing problems?] It may be on the agenda . . . if it’s going to benefit them in profit.” But they also expressed frustration with policymakers’ inaction: “They [politicians] give lip service. They call Facebook in and talk to him. But do they do anything? I don’t know what’s the follow-up or what’s done.” Many voters in the focus groups worried that policymakers are more concerned with using technology to benefit their campaigns than with addressing potential problems. Given the chasm between the current technology policy conversation in Washington and the concerns voters voice in their everyday lives, only 11% say policymakers are well-equipped to solve technology problems.

Voters say that protecting against cybersecurity threats and securing their private information online should be among Washington’s top overall priorities—outranked only by bringing down the cost of health care. And these are concrete, not abstract, concerns; one in four say they have been victims of cybercrime, and many more fear they will be victimized and report worrying about that possibility multiple times a day. But instead of focusing on their concerns, voters perceive policymakers as concentrated on amorphous technology issues right now and failing to take the steps necessary to protect them. Clearly, there is a disconnect between how voters are viewing technology policy and how policymakers and advocates are talking about it. Hopefully, this research will begin to help shift the conversation and close that gap so that voters feel more heard and protected by the leaders in government and industry on technology policy moving forward.