Joe Biden has an historic opportunity next year. Sound policy and smart politics can converge: Voters want big steps taken to address the pandemic and economic crisis, but to them that means focusing on the most urgent priorities over blue-sky aspirations and a commitment to compromise over ideological rigidity. Their message: get things done.

Americans desperately need help now, and Democrats must deliver before the midterms. But the President-Elect and Democrats running in 2022 must also overcome serious problems with the Democratic brand. Many of these issues were used by Republicans (successfully) to caricature down-ballot Democrats as extreme in 2020, and if gone unaddressed, they will continue to drag candidates down in the upcoming midterms.

These are the top lessons from our post-election national survey of registered voters with GBAO Strategy.

Biden is entering the White House with a mandate from voters for big and immediate change. But turning this mandate into progress requires continued support from voters. Retaining this support hinges on making the virus and economic recovery the top and most urgent priority, a commitment to action with a willingness to compromise to get things done, and squarely addressing voters’ concerns with the party brand. These brand issues will plague Democrats in 2022 if the President-Elect and his party fail to shore up those vulnerabilities and capitalize on the opportunities for progress over the next two years.

Voters want Biden to go big and see compromise as essential to getting things done.

In this post-election survey, voters were asked a series of questions about what they want to see from the Biden administration. The upshot is they want Biden to go for big changes and focus on their most urgent priorities. And they also clearly want the President-Elect to compromise when necessary to get things done. For Democrats, embracing such a governing approach would be both sound policymaking and smart politics: 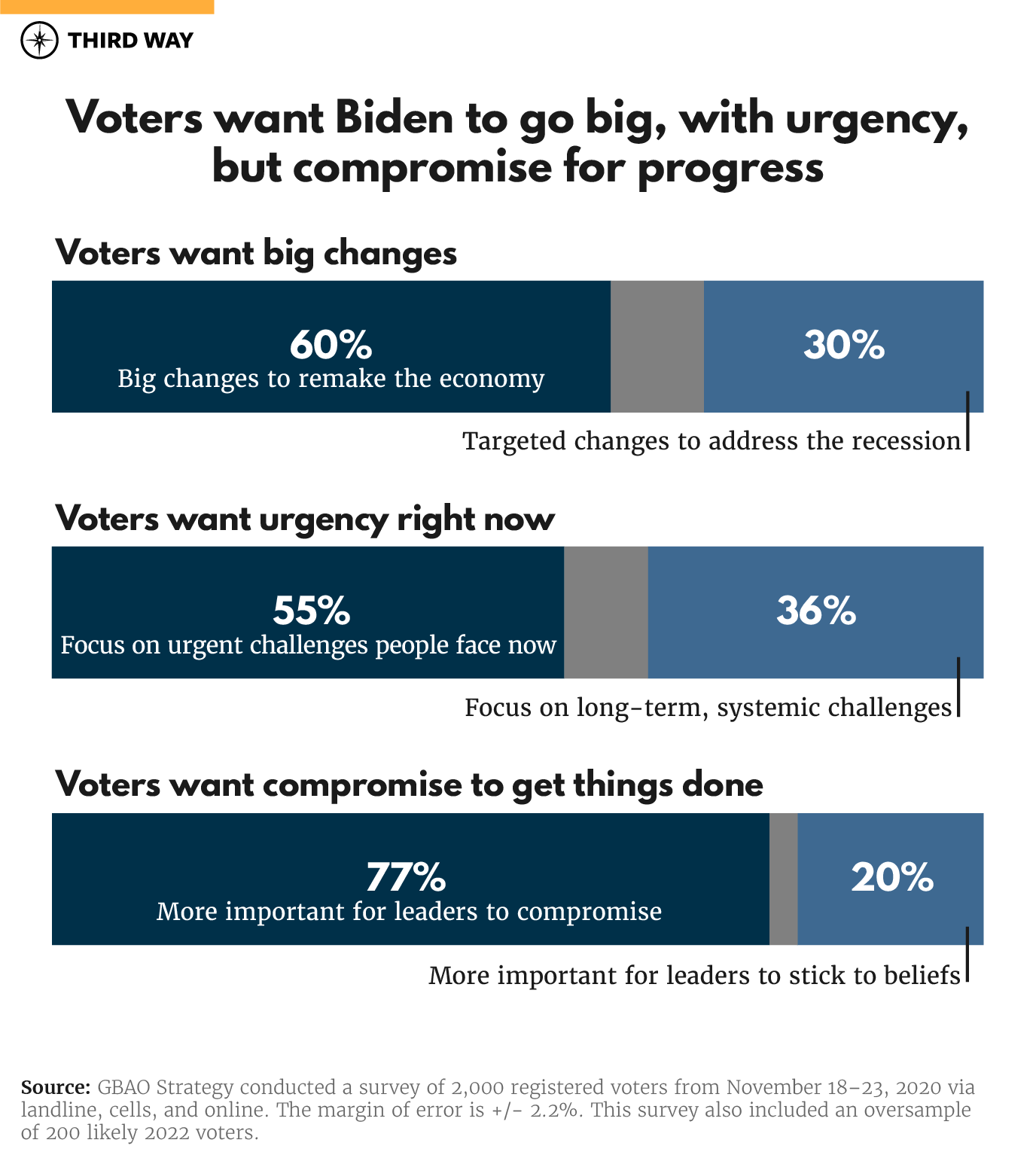 The action voters want from Biden is on the virus, the economic crisis, and health care.

Voters in the survey offered a governing template for Biden that emphasizes big action on urgent challenges. We followed up on this desire by probing which specific issues voters want Biden to take action on in his first year. They were unequivocal that they want action on the virus—on both the public health and economic front—and to lower health care costs generally.

When asked how much of a priority an issue should be in Biden’s first year, on a scale of 0–10, voters’ average score for controlling the pandemic is 8.2. It is also 8.2 for providing pandemic economic relief, and it is a close 7.9 for lowering health care costs. In this moment, these priorities dwarf other crucial issues like voting rights, climate change, and infrastructure. These top three issues cross the partisan divide, but Democrats rate each higher than Republicans on the 0–10 scale, with controlling the pandemic at 9.4 vs. 7.1, providing pandemic relief at 9.0 vs. 7.4, and lowering health care costs at 8.7 vs. 7.1. Independents fall in the middle. This gap swells on issues like lowering barriers to voting, with Democrats giving it a score of 8.1 to Republicans’ 4.2. 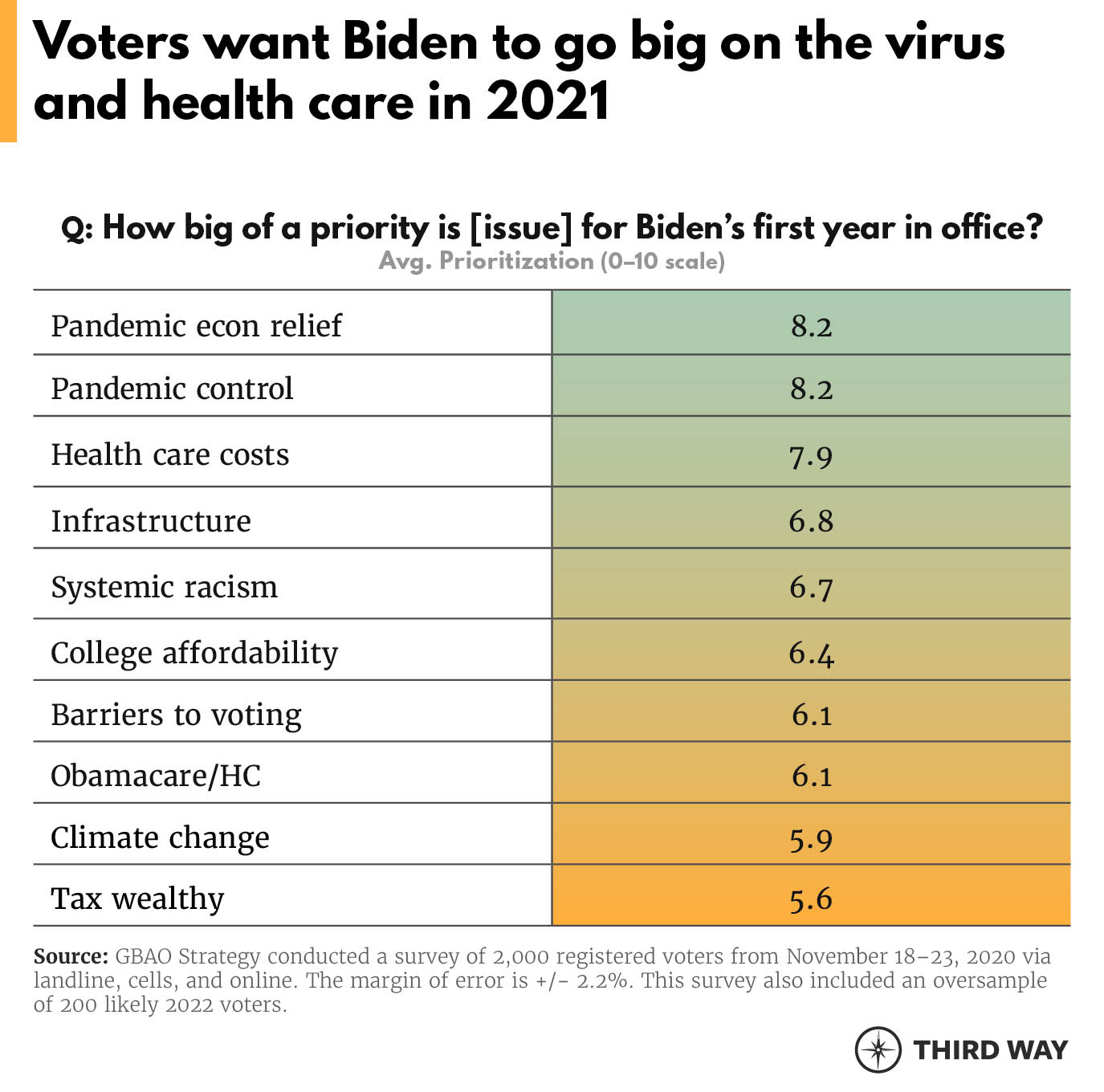 In addition to asking which issues Biden should prioritize, we also asked which ones would make a difference in voters’ lives. At first glance, the responses to this second set of questions are consistent with the first: on the 0–10 scale, voters list the same top three issues of controlling the pandemic at 7.8, providing pandemic economic relief at 6.4, and lowering health care costs at 6.9. But there is a subtle but important difference. While the gap between the questions on prioritization and personal impact is small for controlling the pandemic (8.2 to 7.8), it is significantly wider for providing pandemic relief at 8.2 to 6.4. This disparity highlights the uneven personal financial damage from the coronavirus and the policies that have provided some economic relief thus far. We are all affected by the virus on a public health level, but just a segment of the population is feeling the worst of the economic fallout. 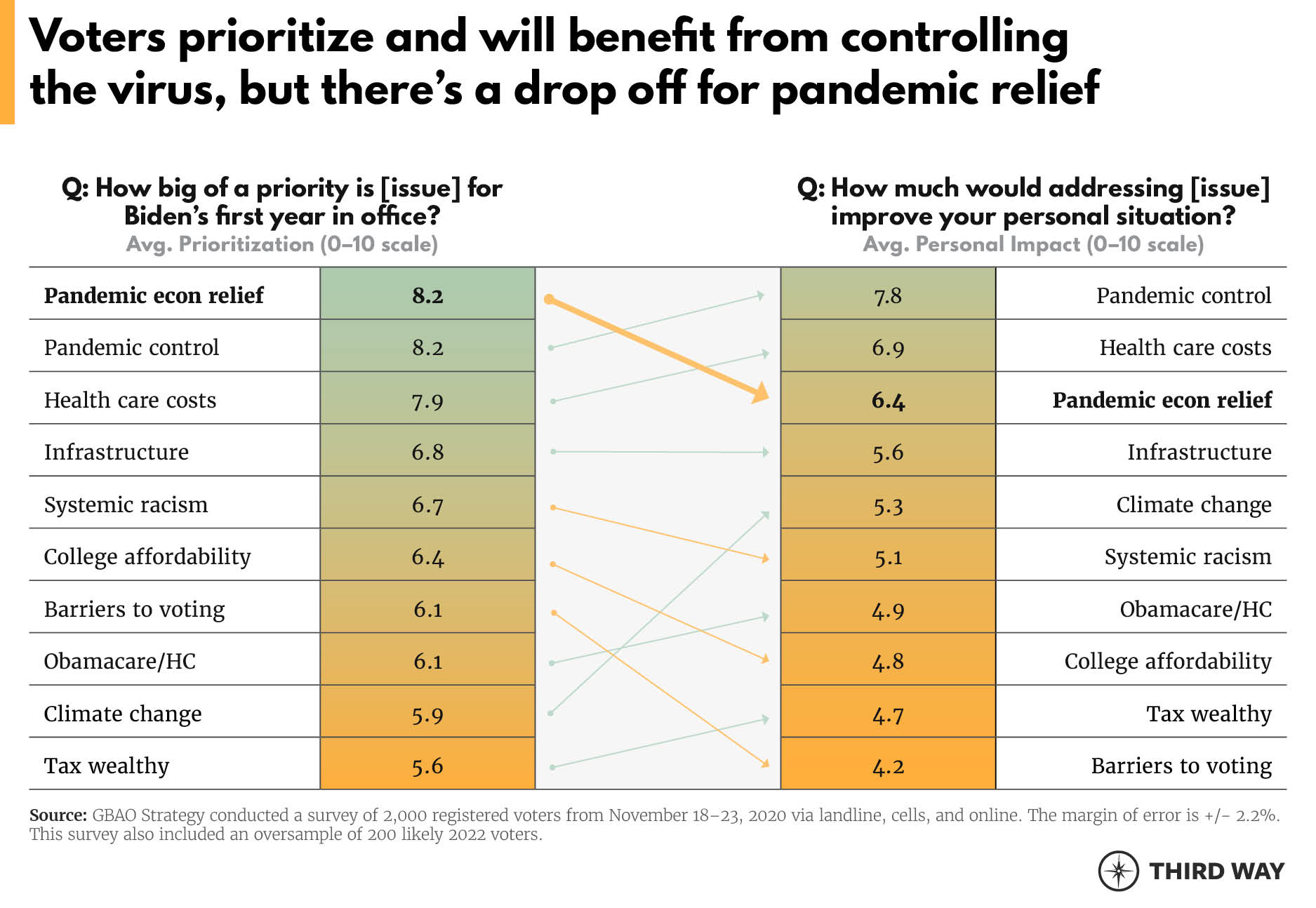 As mentioned, several vital issues are lower on voters’ priority list right now, such as climate change and voting rights. On climate change, it is critical for advocates to win the jobs and economy fight as well as the environmental argument. On issues like voting rights and others of importance, Democrats should embed them where possible in the broader conversations about the big changes we need to make to get our country back on track and remind voters how they will improve their own lives.

The Democratic Party brand is an obstacle. It is a hurdle for Biden’s governing agenda, but especially for Democrats in 2022 who may not have the same ability as Biden to carve out a distinct brand of their own. In the survey, voters flagged major concerns with the party’s ability to deliver on the economy as well as on other issues like maintaining law and order.

We presented voters in the survey with a series of descriptions (both positive and negative) and asked whether they better characterize the Democratic or Republican parties. Voters think Democrats want to raise their taxes—by a 30-point margin. They also say that Republicans better understand the economy and jobs by 15 points. They say Democrats are more concerned about the poor than people like them by 35 points, while maintaining that Republicans better represent hardworking people by 10 points. Voters feel Republicans are better equipped to maintain law and order by 16 points, but they do narrowly view Republicans as more likely to incite violence (by two points).

Likely 2022 voters share similarly negative views about the Democratic brand, which could have serious implications for the coming midterms. Down-ballot Democrats will be working to overcome these perceptions in the face of relentless attacks. 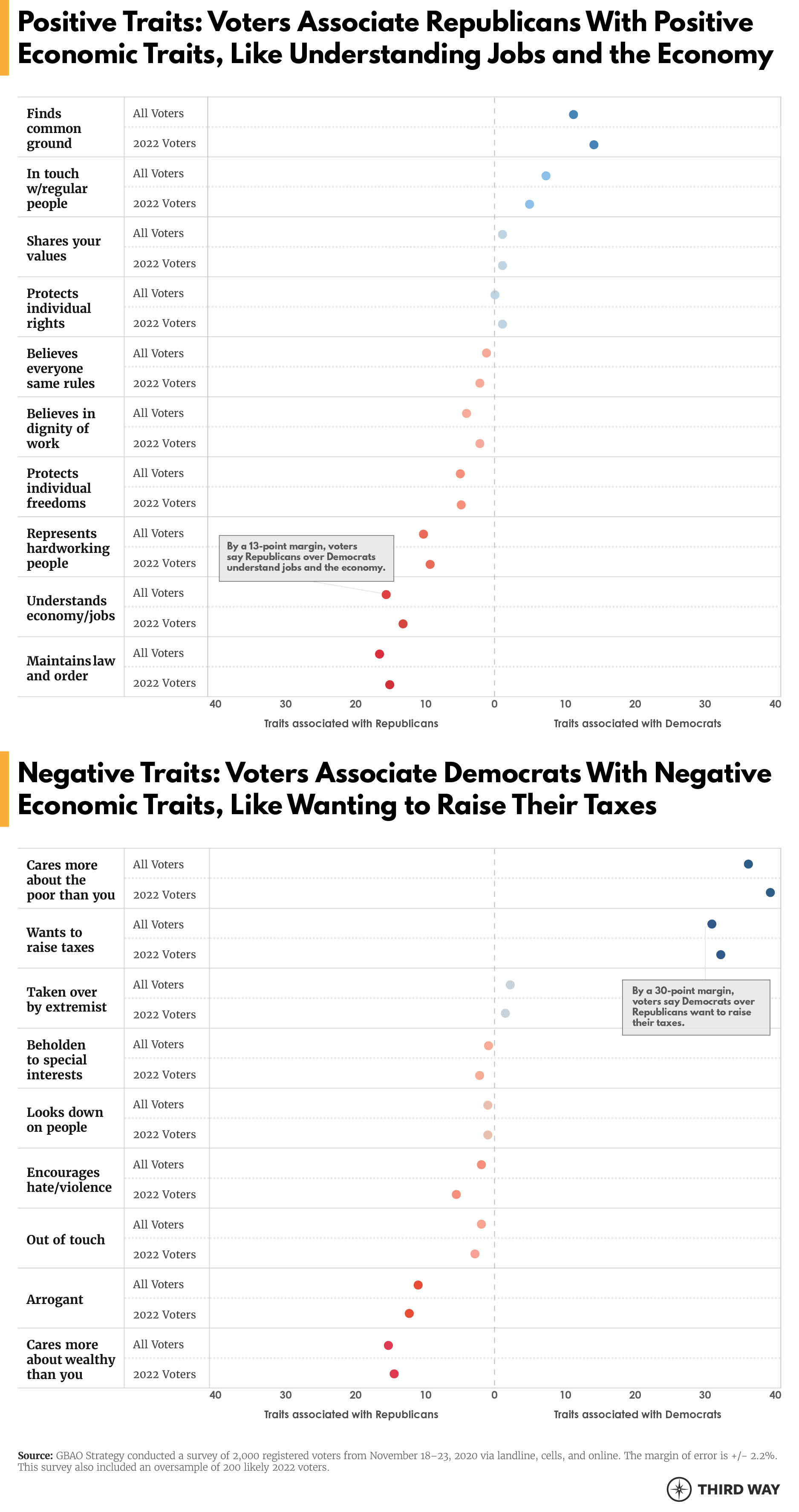 To be clear, Republicans also have their own brand challenges: while Democrats are seen as more in touch with regular people by seven points, Republicans are viewed as more concerned with the wealthy by 15 points and more arrogant by 11 points. But based on the down-ballot 2020 results, Democrats should not take false comfort in Republicans’ deficits. Instead, they must chart new approaches to reverse voters’ negative perceptions of the party on issues like taxes, jobs and the economy, and law and order.

President-Elect Biden is a fitting leader for this moment, and this moment is a real opportunity for progress for our country. Voters want significant changes on their most urgent priorities, most notably controlling the pandemic, helping those who have borne the virus’s economic costs, and lowering health care costs. These urgent and tangible issues are what voters prioritize over blue-sky aspirations championed by many on the left. And voters truly value progress; they want leaders to compromise to achieve it. This approach is sound policymaking because it aggressively focuses on what will do the most good right now. And it is smart politics because Democrats need to show a skeptical public that government can be a force for good again. But to achieve progress governing and maintain power in the 2022 midterms, Democrats must grapple with and overcome persistent problems with the party’s brand and lean into the places they have an edge, including on being the party that can find common ground and really deliver.

Third Way partnered with GBAO Strategy to conduct a survey of 2,000 registered voters from November 18–23, 2020 via landline, cell phones, and online. The survey also included an additional oversample of 200 likely 2020 voters. The margin of error is +/- 2.2%.