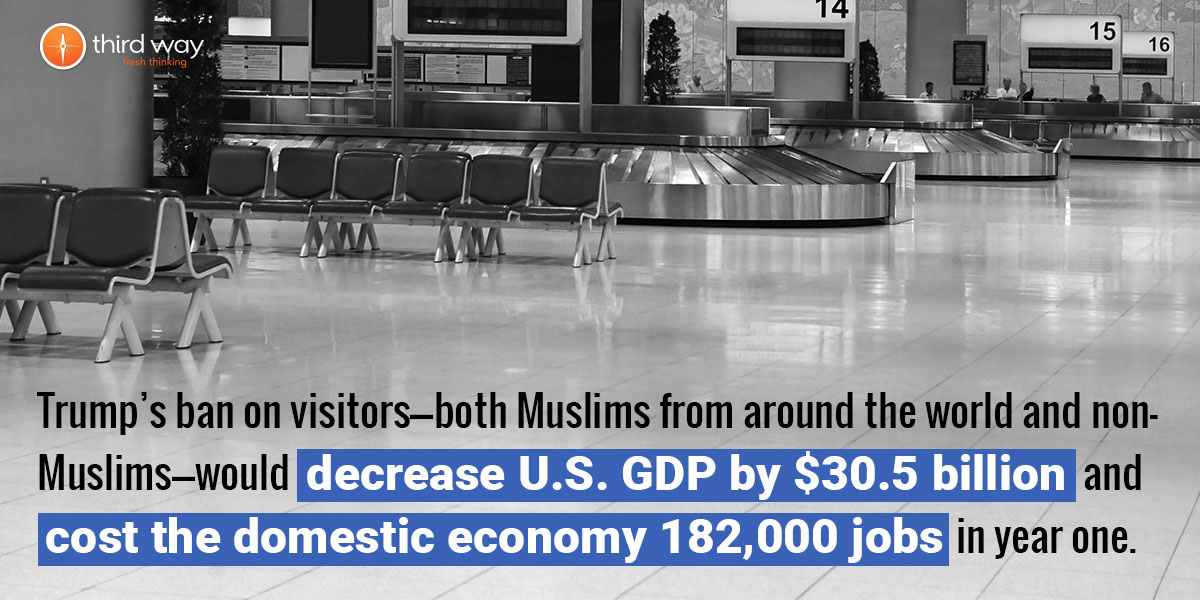 In December, Donald Trump called for a “total and complete shutdown of Muslims entering the United States.” Last week, Trump—in his own words—“expanded” the Muslim ban to include “any nation that has been compromised by terrorism.” This proposal has drawn derision for its incompatibility with American values.

But what would his ban on visitors—both Muslims from around the world and non-Muslims, presumably, from terrorism-affected countries—mean for the U.S. economy? In this memo we forecast the economic effects of a ban on visitors. Our findings:

Trump’s ban on visitors to the U.S. would decrease U.S. GDP by $30.5 billion and cost the domestic economy 182,000 jobs in year one. GDP and job losses would then increase significantly each year the ban remains.

Those losses do not account for the further economic damage banning Muslim and other immigrants would cause. We also examine the implications of an immigrant ban by highlighting the economic contributions of the existing American-Muslim community, which makes an outsize contribution to GDP and job growth in the U.S.

How can Trump’s visitor ban cause so much harm? For one, even though American-Muslims make up only 1% of U.S. residents, we estimate that Muslims from abroad comprise 3.8% of inbound international visitors.1 This is not an official statistic—the government does not document the religious identity of each person entering the country. But it is a reasonably precise estimate using the religious composition of visitors' counties of origin. Plus, many of the 23 countries that rank highest on the Global Terrorism Index (our best proxy for the list of countries Trump will select) send lots of visitors to the U.S. They include countries with large non-Muslim populations, like China and Russia, as well as countries with close cultural ties to the U.S., like Israel and the Philippines.2

Altogether, these groups contributed 8.37 million of our 77.5 million international visitors last year. We’re not just talking tourists. This group includes business travelers and foreigners studying at U.S. universities, from a semester abroad to a Ph.D.

A ban on visitors, by the numbers

Not accounting for immigrants or secondary effects like reduced trade and investment—we project the results of Trump’s visitor ban would include:

Also, Muslim visitors to the U.S., in particular, spend more money here than typical visitors spend. While the average spending of visitors to the U.S. is $3,100, we estimate that Muslim visitors on average spend about 45% more, or $4,500.3 That’s in part because a disproportionate number of Muslims visit the U.S. to go to school. We estimate the Muslim share of international students in the U.S. is 18%.4 Students spend more than tourists because they stay here longer and they pay tuition—almost always full tuition.

When foreigners spend money in the U.S., economists count that money as exports. That’s because all those transactions represent U.S. firms selling goods (like food and merchandise) and services (like hotel stays, tuition, and flights on U.S. air carriers) to consumers from foreign countries. So foregoing $4,500 worth of sales to 2.95 million foreign Muslim consumers every year adds up to a $13.3 billion loss in U.S. exports. By definition, that also means a $13.3 billion loss in GDP. Using the same conservative methodology that the Department of Commerce uses—measuring the direct impact of those lost exports only—we estimate a corresponding job loss of 79,000 in the first year of the ban.5 Add in the effect of banning all visitors from the most terrorism-affected countries, and the job loss climbs to 182,000. Those job losses would be scattered by industry and geography, with likely the greatest impact including jobs in tourism, hospitality, and education.

The harm to the U.S. economy would grow each year the visitor ban would remain in place. The U.S. Department of Commerce estimates a 20% increase in international travelers to the U.S. over the next four years, with a 62% increase from Middle Eastern countries and a 64% uptick from those in Africa.6 Because those regions have large and growing Muslim populations, the economic impact of a Muslim ban would only grow with each successive year.

Of course, banning Muslims and others from terrorism-affected countries from entering the U.S. would have economic consequences well beyond the direct effects of losing visitors. First, there’s immigration. Research has shown that immigrants have disproportionately high rates of entrepreneurship, making an outsize impact on job growth.7 And they are disproportionately young, making a net-positive impact on the solvency of our entitlement programs.8

To get a clearer picture of what kinds of economic contributions we’d be losing out on by halting Muslim immigration, consider the contributions of the existing American-Muslim community. American Muslims are among the most educated and highest-earning populations. As of 2014, 40% of American Muslims held a bachelor’s degree or higher compared to only 25% of Christians and the national average of 28%.9 Muslims also contribute disproportionately to the medical profession. American Muslims account for 5% of all doctors even though Muslims make up only about 1% of the United States’ population.10 These traits translate into a substantial impact on the U.S. economy. Total Muslim-American disposable income is estimated at $98 billion, with household GDP contributions pegged at an estimated $190 billion.11 In other words, American Muslims contribute a sum on par with the entire GDP of Vietnam.12

American Muslims in the U.S. economy, by the numbers

Banning Muslim immigration to the U.S. would be a repudiation of the huge contribution American Muslims make to our country, one part of which is economic. For example:

It should go without saying that the greatest harm of the Muslim ban, even the suggestion of a Muslim ban, is to the American ideal—the centuries-old commitment to freedom of religion and to opening our free society to immigrants and visitors from all corners of the globe.

It should also go without saying that a Muslim ban would undermine U.S. foreign policy goals. One of the greatest weapons against extremism and authoritarianism abroad is cultural diplomacy: when citizens and leaders from abroad visit America—Muslim or otherwise—they meet our people, experience freedom and civil society first hand, and return home with a greater respect and appreciation for America and its values. Banning people from visiting in the first place, on account of their faith or country of origin, would have the opposite effect. In fact, Trump’s Muslim ban has already been used in terrorist recruitment videos.13

But critics of the ban must also reiterate its economic consequences. We wouldn’t ban the export of American cars or wheat to half the world’s population. So why would we ban the export of tourism and education to the same population? Doing so would, most immediately, put 182,000 Americans out of work. And shutting off immigration opportunities to this group would stamp out a major additional source of entrepreneurship and job creation.